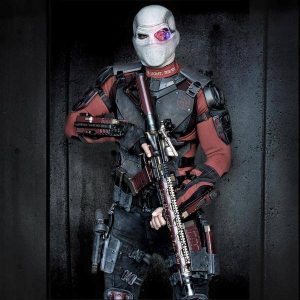 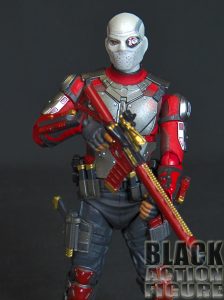 I have to say, finding the best representation of Will Smith as Deadshot from the movie “Suicide Squad” is apparently a lot harder than it sounds. I wasn’t quite pleased with the Mattel 6″ figure since it included 1 pistol. Not even his rifle…just the pistol. I was a little more pleased with the Mattel 12″ figure since it came with both pistol and rifle, but then it did not come with a Deadshot mask or extra head, which was disappointing for such a simple but otherwise mildly acceptable figure.

I did like the Art Figures 1/6th Scale knockoff (Dead Soldier…lol) since it came 7 months before the Hot Toys version. But I really wanted that definitive 6″ Deadshot figure. So it was always a fight between Bandai’s SH Figuarts Deadshot figure and the Medicom MAFEX one coming in the next month or two. But if I really had to put money on it sight unseen, it would have been SH Figuarts hands down. So do I win that bet? Let’s check out the figure review below… 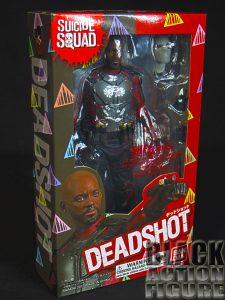 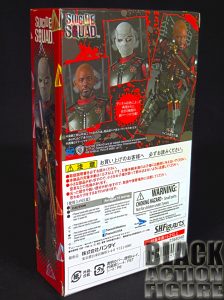 Don’t sleep on Bandai’s packaging prowess. It always surprises me when I open my package to see that this 6″ figure comes in packaging almost smaller than what usually comes with a 3.75″ figure. They either really know how to utilize space.

What does bother me is that each separate SH Figuarts figure comes in different size boxes depending on figure and accessories, so you can almost never try to neatly sit them on a bookshelf as the result could be too chaotic to be rightly seen.

The front of the packaging is great with a fun little Suicide Squad related design and a shot of the figure in action. The window is a little too plasticky, so it’s hard to see the figure in the proper light, but I quickly get over that since it’s coming out.

The back has more shots of the figure and a whole bunch of Japanese writing so uh…yeah, that’s good I guess.

The most impressive thing is the size…the Marvel Legends line comes to mind and while their packaging is always uniform, what comes inside usually varies and sometimes feels like it was a waste of space. I don’t get that feeling with this packaging. 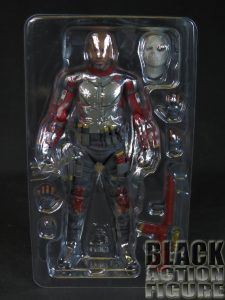 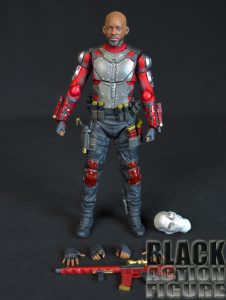 As I take the plastic shell out of the box, I start to kind of worry. I see the rifle, the two extra pair of hands, and the extra head…and I wonder where are the other weapons?

With a quick glance at the figure’s side and back, I see that his main pistol is holstered on his side, his knife is holstered on his lower left leg, and the two pistols on the back are nicely sitting in their holster. I think to myself, “that’s a cool way to ship them.”

To my absolute horror, after I get the figure open, I realize that something is wrong…none of the holstered weapons are coming out of their holster. Then that realization solidified…these aren’t removable weapons, they are sculpted props! I could not believe it…not from SH Figuarts, who I have described on more than one occasion as the “Hot Toys” of 1/12th figures. But yet, it was true. The only weapon that came with this figure is his symbolic rifle.

Unacceptable. We pay a premium to have a movie accurate figure of the character and that includes weapons as well. I expect Mattel to pull this shit, not our beloved Bandai. This quickly ruined the rest of the review for me. 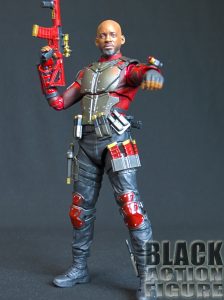 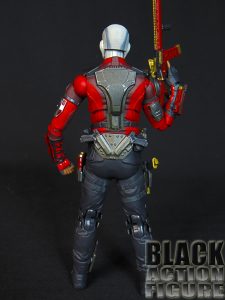 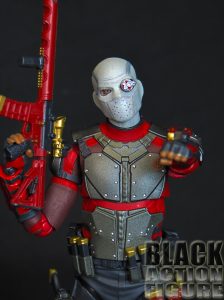 Okay, they didn’t do that great with the accessories, I know they are going to absolutely kill it with the sculpt/likeness, right?

The good? The paint job on the figure is commendable and in many ways pretty impressive. The design is straight from the movie.

But looking at it closer, I start to notice a few things. First, the “The Light, The Way” saying does not show up on the figures collar or rifle. Are you serious? Even Mattel got that right when they put that on the figure’s collar. So I know it is possible…they just chose not to go with it.

Other little details are missing here and there and after a while, I just stopped looking for them. I realize at this point that this is not my definitive 1/12th scale Deadshot figure like I thought it would be. And taking a look at the back, while intricately designed, those guns are teasing me since I know they’ll never come out.

The Will Smith likeness? I think they got the eyes completely wrong, and it throws the whole look of the figure off. Now I’m looking more and more forward to the MAFEX figure because their prototype is a dead ringer for Will Smith. This one, sadly, is not. 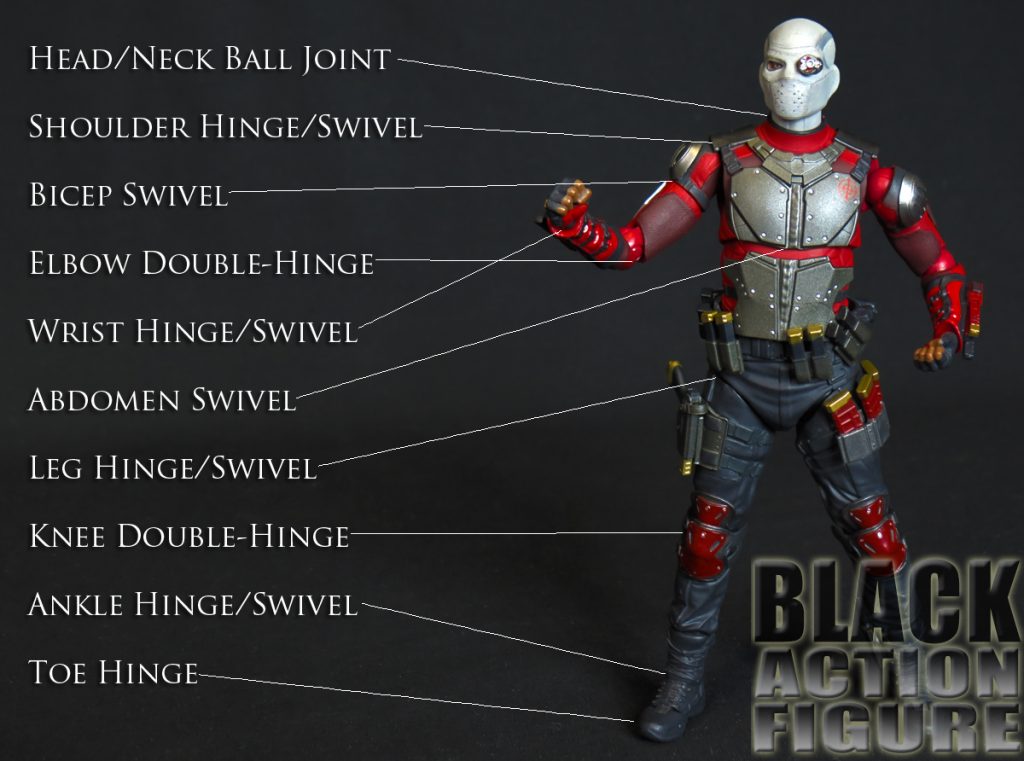 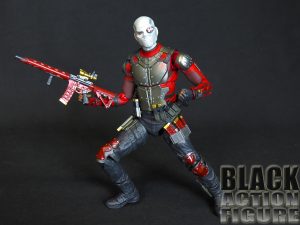 The one thing I can’t fault Bandai on is this figure’s articulation, which features 30+ points. On top of that, this figure has excellent balance, which I found was excellent on the SH Figuarts Michael Jackson figure I reviewed. Right out the box he was standing with little to no effort.

His elbows and knees bend to the extreme with no effort, and they even threw in a “Marvel Legends”-like toe hinge.

Of course not everything is perfect. There seems like there should be some waist articulation, but it is perhaps hampered by his belt full of magazines. The abdomen swivel also seems hampered by the armor itself.

Really, without a variety of weapons, I feel like there is no need for any type of intricate articulation. The figure does have wrist guns and that’s okay…I guess. But I look at Marvel Legends Deadpool for example…for $20 we get two swords, guns, knives, rifles and even a bazooka. I could pose him ad nauseam to my heart’s delight. Not the same here. 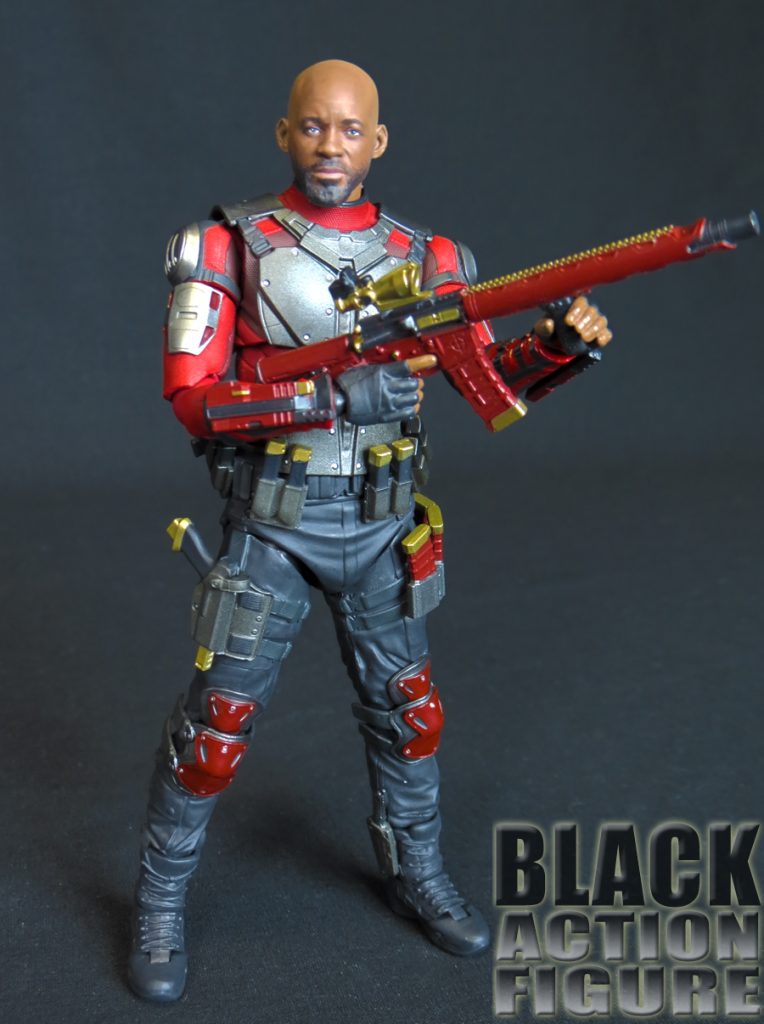 I expected so much more from this figure and was so disappointed. This was to be my 6″ “Hot Toys” but it failed in so many ways.

Bad news: I have to wait on the Medicom MAFEX Deadshot and hope that is the answer.

Good news: It should be coming soon!

Gooder news: I have the Hot Toys Deadshot figure in hand and it will be my next review, so hopefully this is the Deadshot that I’ve wanted in my collection from the beginning!

So my hopes may be dashed for this one, but there is a light at the end of this tunnel…