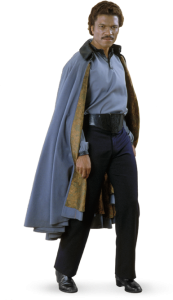 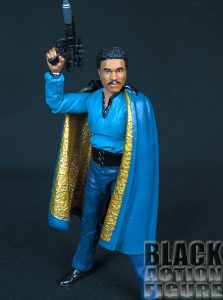 Let me first get this out. We are 4 years into Hasbro’s Star Wars Black Series of six inch action figures, and we are just now getting a Lando Calrissian figure. I won’t start naming the insignificant figures that made the cut before Lando (Constable Zuvio comes to mind…you know, the guy who was cut from the movie but still managed to get two figures?). I’m just happy that this figure is out and if you can find him (outside of Amazon where I got mine), then count yourself lucky because I don’t know if he’ll be out on store shelves anytime soon. All the retailers are still trying to get rid of their Rogue One merchandise.

Lando Calrissian was iconic in so many ways. He almost single-handedly brought a Black awareness to an extremely popular film franchise. He proved that yes, Black people do exist in a galaxy far, far away. And Billy Dee Williams back then was like the Idris Elba of that time period, so he made Star Wars accessible to countless women who went just to see him. That’s star power.

Does this figure do him justice? Do we really care since we waited this long? Let’s take a look at the review… 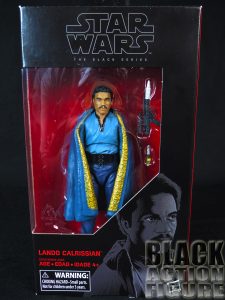 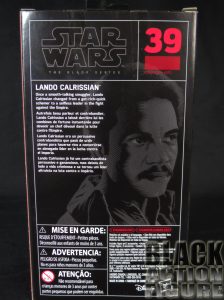 Nothing overall exciting about the packaging outside of the norm for Hasbro Star Wars Black series figures.  But I do want to draw some attention to a couple of things on the back.

For one, this figure is numbered “39” in the series. Really?! Thirty-freakin’-nine? And that’s not counting the exclusive figures that weren’t numbered in the regular series. SMDH.

The other item is the bio-blurb on the back of the package. “Once a smooth-talking smuggler, Lando Calrissian changed from a get-rich-quick schemer to a selfless leader…”  Wait, WTF? Okay, I know not everything is “racial,” but damn it, they might as well have said, “Once a panty-dropping space pimp, this shifty, low-down, Black guy somehow became a General in the Rebellion army proving once again that anything is possible. Thanks Obama.”

Wouldn’t that have been more accurate? Hasbro. fire your character biographer now. 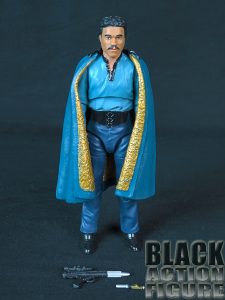 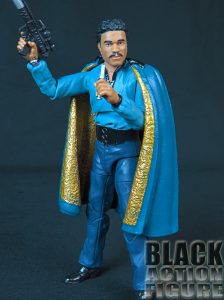 Not too bad in the accessories department.  This figure comes with blaster, communicator (for talking to his assistant, Lobot), and his signature, gold-lined cape.

Quick story about that cape…I never even noticed it was gold on the inside until I saw a picture of this promotional figure. Looking at the character in pictures, I wondered to myself how I could have missed that. They gave the “Black” guy a James Brown cape. My favorite movie possibly of all time is now laced with low-brow stereotypes. I’m just going to go back to thinking that everything is innocent…and remember that George Lucas is married to a Black woman.

Anyway, I love the detail of the blaster pistol, including the silver tip on the end of the barrel. Even the detail on the communicator is pretty good considering how small that thing is. It is now in the running of accessory I’m most likely to lose… 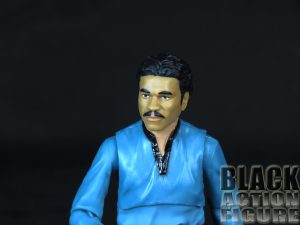 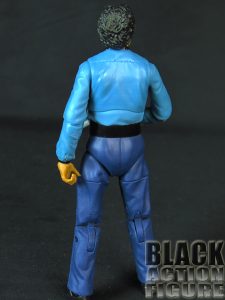 I think I unfairly judge sculpting sometimes and I think it’s because of figures coming out of other companies. Does this figure resemble Billy Dee Williams and his portrayal of Lando Calrissian. Sure it does, but I think I mean that in the most generic way possible.

He definitely has the features. The sculpted, wavy hair. The mustache. The “I’m gonna get you tipsy tonight on Colt 45” look in his eyes. But they’re all painfully generic like “this figure was mass-produced in such a way that we can sell it for $20 a piece.”

In comparison, you have companies like Bandai and Medicom putting out near accurate likenesses at this same scale, albeit at a higher price…usually around $50-$75 a figure. Now we’re falling into that “you get what you pay for” ideology, which I guess for now we’ll have to be okay with. The paint job is good except some splotches of black paint on the figure’s left sleeve. But with a scarcity of this figure (at least so far), beggars cannot be choosers. Black paint splotch it is! Although points will be taken away for lack of quality control… 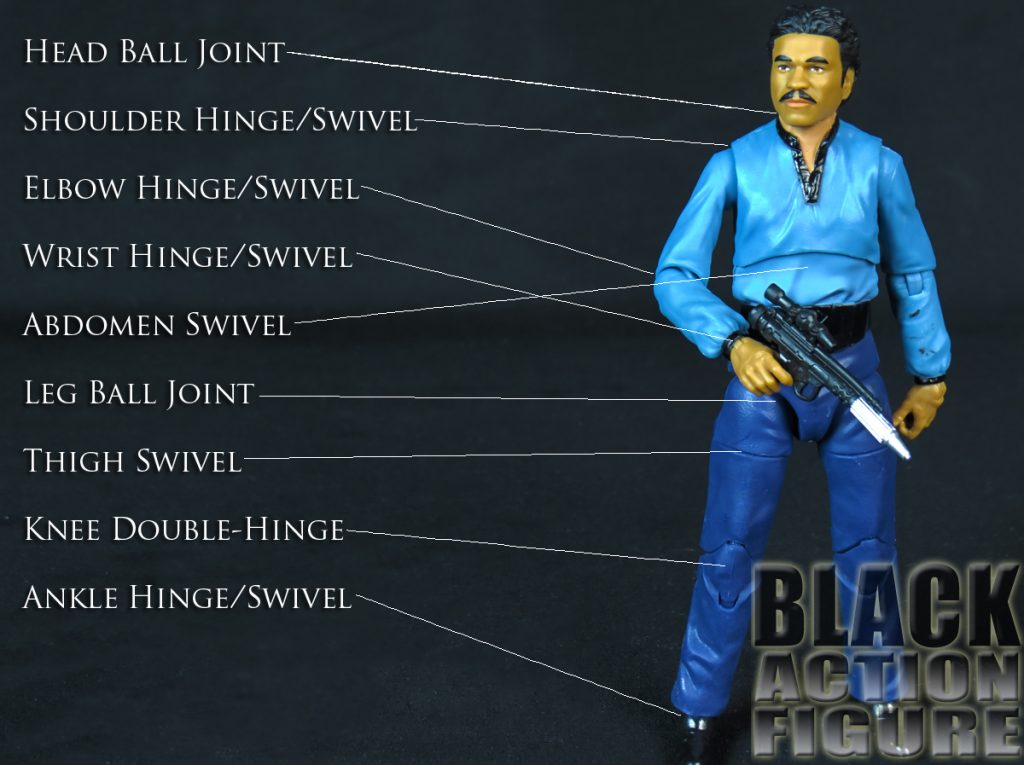 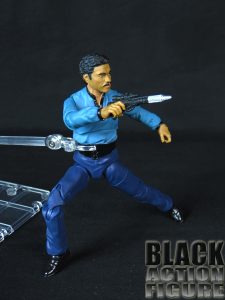 I don’t think Lando had too many action sequences during the filming of the Empire Strikes Back, so I won’t be posing him giving a karate kick to Boba Fett’s head anytime soon. That being said, this figure does come with a Hasbro standard of 26+ points of articulation.

I’m not really going to be missing double-hinged elbows, but there are other ways Hasbro could have improved this. It’s always nice to have figures that can look either up or down, so an extra hinge in the neck like Hasbro provides to their Marvel Legends figures would have been nice.

Also noticeably missing is waist articulation, but again, just something extra that would have been nice, but not exactly necessary.

To note, while you can achieve some level of articulation while the figure’s cape is on, you will be unable to achieve the full range unless the cape is understandably off of the figure. That’s when the party really starts. 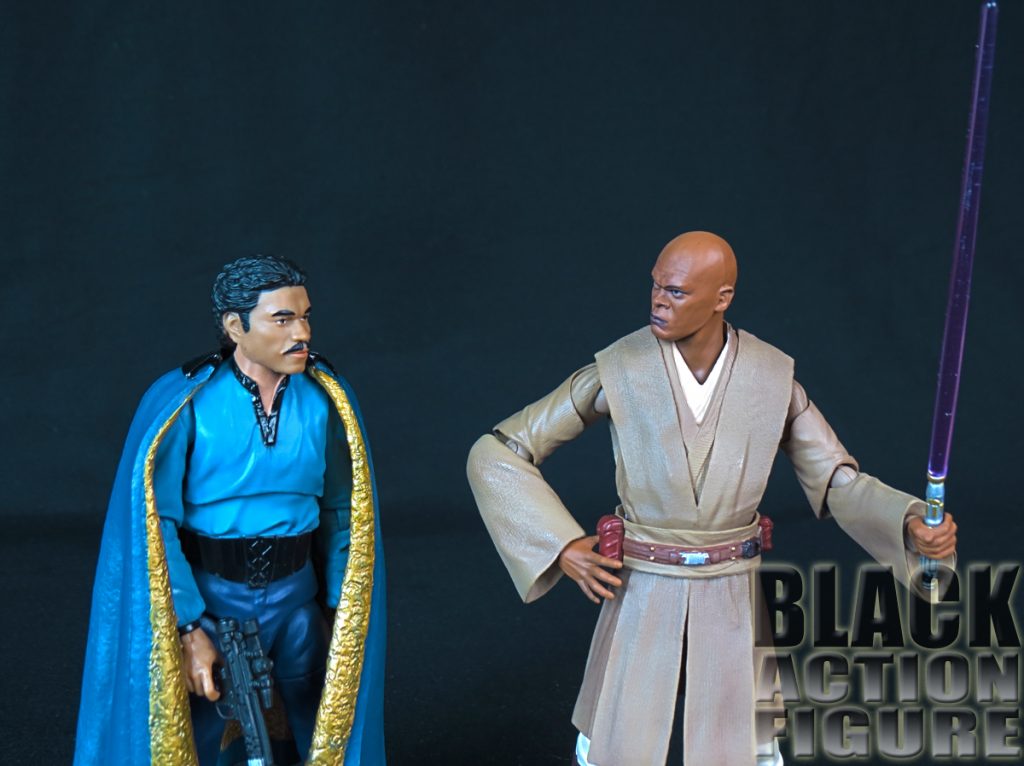 I think I unfairly judged this figure a little because the most recent review in my head was that excellent Bandai Japan SH Figuarts Mace Windu figure. I love action figures that you can just look at and say, “That’s [so-n-so].” I hate figures that kind of look like the character/actor, but then could easily be someone else.

My coworker was the first to see the figure after I took it from the box. His reaction was a little lackluster. Yes, he saw Lando Calrissian, but he also saw some Denzel and someone else.

I wish in this day and age of being able to produce movie accurate figures at a relatively cheap cost, that Hasbro would take more time producing some of these figures. It’s apparent that they see flaws too…they recently redid the Princess Leia headsculpt because the first one is pretty much garbage. Stuff like that when I still can’t trust Hasbro to do the right thing and produce accurate figures will continue to push me toward these Japanese figures to get my fix in.

Let me know what your experiences with finding this figure and what you thought about him in the comments below.