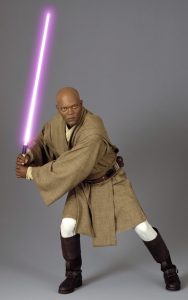 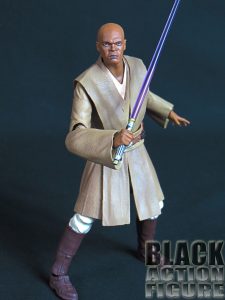 When Sam Jackson entered the Star Wars universe, you couldn’t tell me nothing…I was ecstatic. And the fact that he was playing a Master Jedi, icing on the cake. They could have told me he was playing “Darth Shaft” and I would have been happy. Even how he got his light saber was a bad ass story. “What color light saber would you like Mr. Jackson? Blue or Yellow?”  “Neither. I want Purple. Like Prince Purple. That’s how I roll.”  Okay, it may not have gone like that but I bet I’m pretty close.

Hasbro has yet to do a 6″ Star Wars Black Mace Windu action figure. My question is, why the wait? We have middle-age Obi-Wan, twenty something Anakin, tons of clone troopers, but no Mace Windu yet. Why the wait? It’s time for Hasbro to get off their ass. Luckily we have Bandai and their SH Figuarts collection. While extremely pricey, they have produced quality Star Wars figures in the 1/12th scale that I proudly include in my collection. They are (almost) definitely worth the cost. Enough of this noise, let’s check out the Bandai SH Figuarts 1/12th scale (6″) Mace Windu figure… 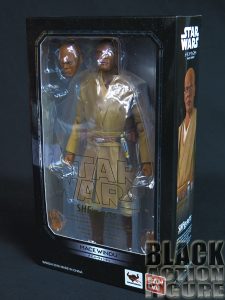 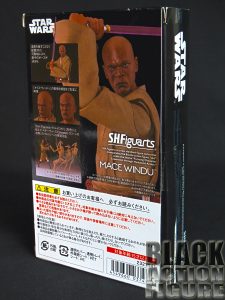 First off, thank you toyhaven.blogspot.com for giving me better ideas of how to photograph the packaging. By turning the package slightly, I’m able to show all four sides in just two pictures. Wish I thought about it before…

That said, the packaging. Love it in all it’s minimalistic simplicity. I think really the first emotion you get is anger because I was all like “I paid all my money for this?!”  But afterwards, you can come to appreciate that you get what you get in a box just big enough to hold it. I mean, I get mad at Hasbro when they give me this big-ass box and if I’m lucky I may get a laser pistol out of the deal. It’s nice that someone can just give me a design for a resealable box big enough for the figure and it’s accessories.

The front window is great, not much to say there. The back is pretty awesome as well with the figure in various poses. I know this toy came from Japan, but my “English Privilege” appreciates the little English that comes on the back.

Is the packaging display worthy? Perhaps. If you’re all in on the SH Figuarts Star Wars line and you are a Mint-In-Box collector, I can see you keeping this on a bookshelf, and referring back to the picture of the figure on the side of the box if you would like to revisit it. Sad, but I can still see it. But it may be the American in me that would want this “collectible” packaging to be just slightly bigger in size. As a rule, I try and keep all packaging that I spend $50 or more on (and this would include this figure), but if I didn’t this would have gone in the trash. Keeping something this tiny does not interest me. 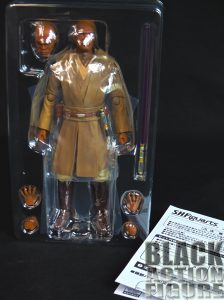 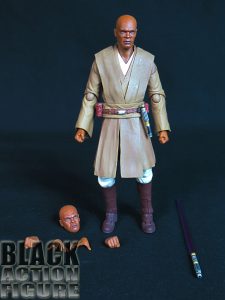 One of the things that I love about SH Figuart figures from the very few that I have are the accessories that come with the figures. It almost feel like I’m getting a mini-Hot Toys figure. And this figure is not the exception.

With this figure we get two different head sculpts, 3 pairs of hands, a light saber hilt that fits on the belt, and a fully extended purple light saber. Usually if a figure comes with instructions (and this one did) you know you’re in for a treat.

The pair of hands that come on the figure were both the closed fists. Nope, that won’t do. I need at least one light saber holding hand and one Jedi force push hand. The rest can go back in the package or in a baggie somewhere. I’m sure some of you feel the same.

I wish we got a Bandai-made figure stand in the packaging. That would have made for some really dynamic posing. But then, you would lose the fun of paying extra for that from Bandai, so forget I even mentioned that idea….

All in all, great accessories. The only other thing that I can think of they should have included was a Jango Fett head, like the Hasbro 3.75″ included with their figure. That’s not morbid at all… 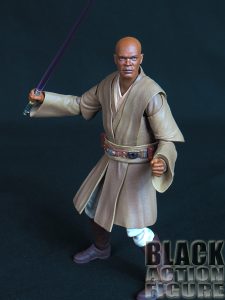 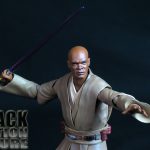 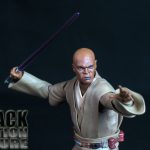 I’m kind of confused with the two head sculpts. Both look like Samuel L. Jackson, but you get one angry-face head sculpt, and then one slightly-less angry head sculpt. Kind of weird choices to include. I wish we got one where he was in mid-scream or something, but I guess these would do. To be honest, I really didn’t see much difference until I reviewed these pictures after the photoshoot. Definitely a difference, just not sure enough of one to care about.

The paint application as far as clean lines and everything is on point. In all accurateness though, I wonder about the color choice for his Jedi clothing. They seem to be more beige in color when maybe they should be khaki. The figure’s boots are also a little washed out in terms of opinion.

I know that may seem a little nitpicky, but when you’re shelling out the cash like this, it better be dead-on accurate. No problem in the facial arena, but the uniform could be a closer match to the one in the movie.

Otherwise, this will be a great addition to my 1/12 – 6″ scale display. Great figure and you can easily tell who it is…what more could I want? 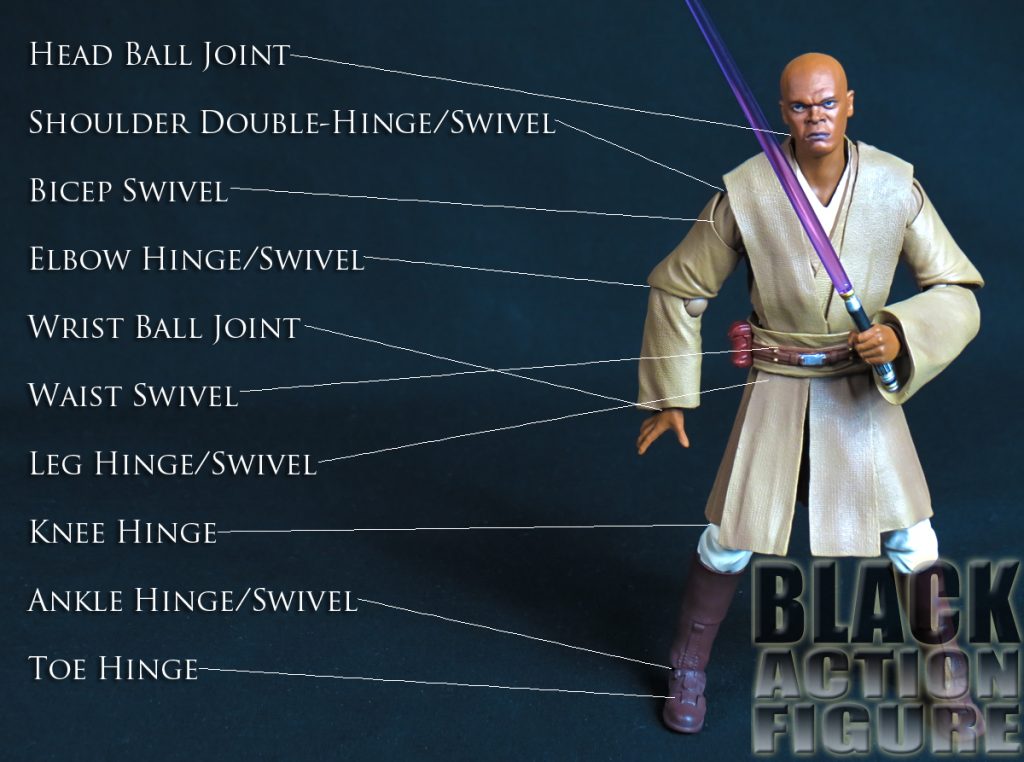 When it comes to articulation, SH Figuarts is no slouch. This figure comes with about 28+ points of articulation, and this really depends on how you count your articulated points. There were some that I thought maybe I could count, but really couldn’t characterize it as a real articulated point, so I left i t alone.

I do enjoy how strategic SH Figuarts has been in placing the joints in the best places so that they are mostly hidden from sight. Even looking at the picture above, I can just make out the inner elbow, the shoulder, and the toe. That only adds to the realism to the figure.

I do have one complaint…as with most of the SH Figuart figures that I own, the articulated joints are somewhat loose…making the figure feel a little cheap at times.  This did not bother me too much as the figure was able to get into a pose and hold it indefinitely. I wonder with regular posing if this will get to be a worse problem later.

Another nitpick…I wish the neck had a hinge on it so the figure could look way up or way down. No particular reason outside me just loving to have it. 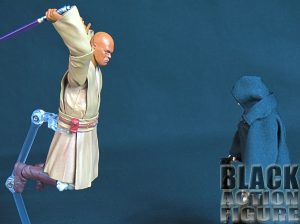 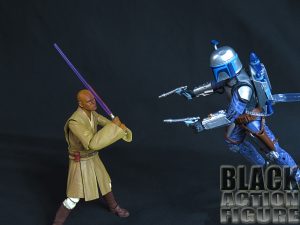 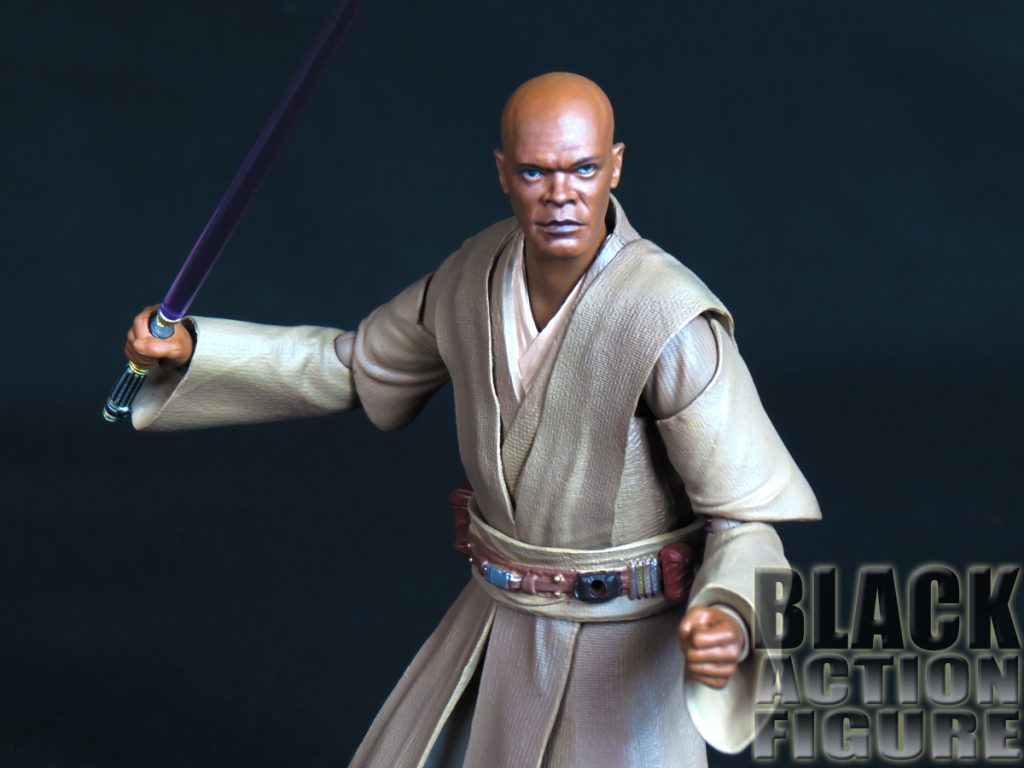 It’s no doubt that this is a great figure to have for any Star Wars fan. The novelty alone of having any Samuel L. Jackson figure is always a great thing.

I wonder if Mr. Jackson has all of these figures in his home. I wonder if you walk into his man-cave if he’s greeted with tens of figures that reflect his likeness? Not egotistical at all…I think he deserves the self-accolades for such an upstanding career.

My question now is: Where are the 1/6th scale figures? I know Sideshow Toys originally produced one years ago. But you know all things operate in cycles. I’m ready for Hot Toys or Sideshow to produce a movie accurate Mace Windu…and I need it like yesterday.

I really hope we get to see it one day soon. I mean, something has to be displayed with my 12″ collection. Otherwise, it would have been all for nothing…

Last thing: If you can fit this figure into your budget and you’re a Star Wars fan, this is a must buy figure. I give you permission…go ahead and splurge a little.