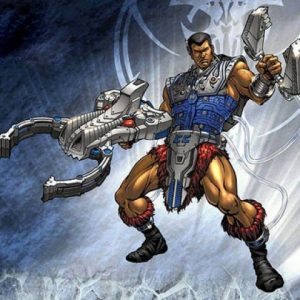 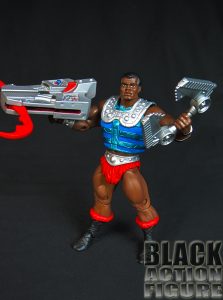 I never thought I would get tired of 1/6 scale reviews, but I thought I would mix it up a little.  Not everyone likes 1/6th scale figures, so I’m sure a little variety won’t hurt. And I have a box full of figures that need to be reviewed. Next up is the Mattel version of their first Black Masters of the Universe figure (and the only one produced in the first original line of He-Man figures), better known as Clamp Champ.

A little history on Clamp Champ…he was originally introduced in comic books. By the time the original figure was introduced, the original animated series came to an end. He was also to be featured in the New He-Man animated series, but that series was also ended before his introduction (can’t a brotha catch a break?). With that being said, his character has had limited comic book exposure…yet remains popular among the Masters of the Universe crowd.

In the MotU storyline, Clamp Champ takes the place of Man-At-Arms after a series of events has Man-At-Arms kidnapped.  He eventually settles into a role as bodyguard to the King after Man-At-Arms returns. He is proficient at many weapons, but his weapons of choice are the two different clamp weapons he carries with him (“Clamp” Champ…get it?).  And the word “Champ” is also significant as you can tell he bears a passing resemblance to the greatest champ of all time, Muhammad Ali.

Quite a background, but does his figure live up to the hype? Check out the review… 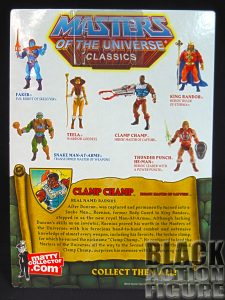 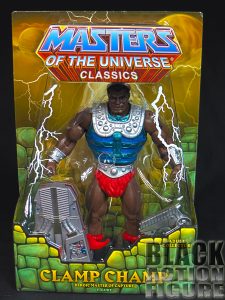 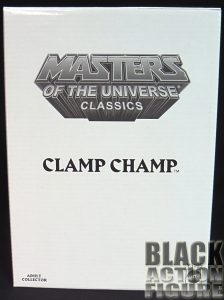 Like all MattyCollector exclusives (MattyCollector being Mattel’s Adult Collector website that is now defunct), the figured is packaged in a plain white box, usually with a logo of the line (Masters of the Universe Classics) and the name of the figure. If you feel shame buying action figures, feel it no more as the bottom left-hand corner distinctly says “Adult Collector,” making you feel reassured that, hey, no kids allowed! (yeah, right…)

Once out of the box, the packaging actually caters to the “mint-in-box” crowd. While this is my first pickup from the Masters of the Universe line (surprisingly), I can see a serious collector keeping this in the packaging and lining them up on a shelf. The packaging is unique…it’s not a normal clamshell, nor is it a box…kind of like a combination of the bottom third of a box mixed with a clamshell around the figure and accessories. The result allows you to see most of the figure and accessories without ever removing it. But, damn it, I’m a collector.  And a reviewer…and I can’t review figures inside the packaging.

The back is remiscent of other Mattel lines (like DC Universe Classics), showcasing different figures on the top half along with a bio-blurb of the figure on the bottom half. But no one really cares about the back. The party is all in the front. All in all, great display packaging, but not practical at all to you package-openers. 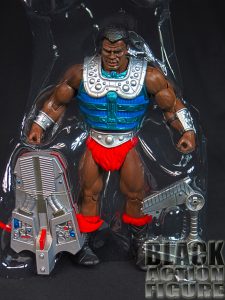 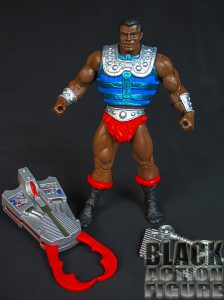 This Clamp Champ figures comes with…well, clamps (no mystery there). What I can’t figure out is why there is no spring action in the bigger clamp, like in the original figure seen in this old commercial from the 80’s:  https://youtu.be/Q27gui1mer8

When I found out the clamp is manually moved, a little piece of me that fondly remembered this old commercial died a little. How can you have a Clamp without it being spring-loaded? Well, it’s great for taking pictures and posing, but crappy otherwise. Not to mention that it is heavy, so when it is in the figure’s hand, unless posed right, he will come tumbling down no matter what.

The other smaller clamp actually looks better in his hand, even if it doesn’t really do anything. The accessories in general are just kind of there. Nothing exciting, but is proper and appropriate for the figure. 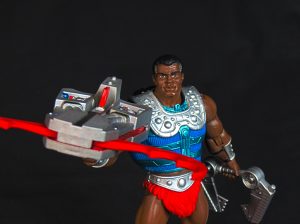 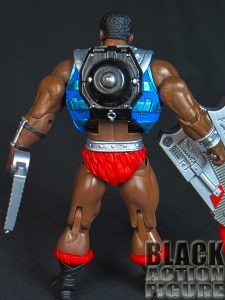 Since there is not much media except some comic appearances, I would guess I have to say that the likeness is spot on.  This character does have an updated look as shown in the picture above.  NECA has a figure that is closer to that more updated look.  This figure more resembles the He-Man and Masters of the Universe figures I originally grew up with. Where every man in Eternia wore fur shorts and everyone was muscled beyond comprehension. So pretty much the basic body shares the same mold as everyone else.  It was the extras that defined the character.

The head sculpt is on point. Never before have I seen such distinct Black features in a six-inch figure. The hair is more closely cropped than the original afro the character sported, easily giving him a more updated look. The armor on the front and back is detailed and painted without any visible errors. An all-around good sculpt for a good figure. 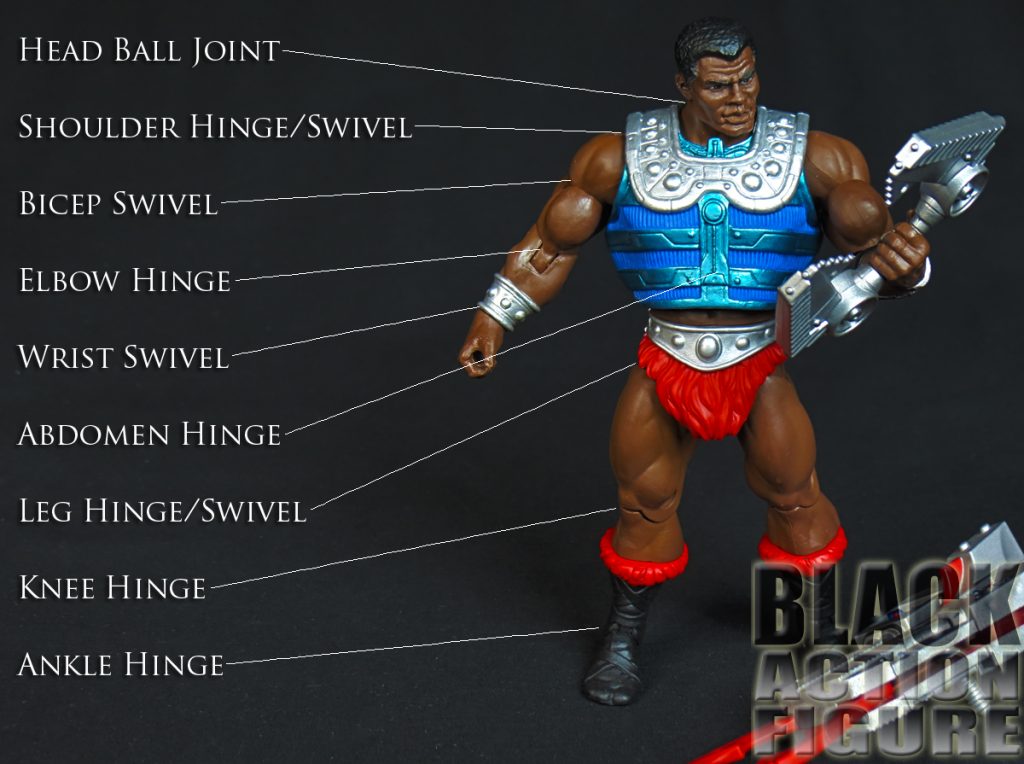 I have to be honest…for an updated Masters of the Universe figure (and to reiterate, my first), I really expected the articulation to be a little higher, or even more on par with Mattel’s other franchise, DC Comics Classics figures. With this figure, you get just about 20 points of articulation. Missing are industry standards like double-hinged knees and elbows, or even a waist swivel.

We do get an abdomen hinge, which is okay, but bend him back to far and you expose the figure’s belly button and abs, which makes it seem like a weird fashion faux pas rather than suitable battle armor.

To round out what else is missing, there is also no boot/shin swivel, and/or ankle swivel, which would have made posing a little better. Even a thigh swivel would have made some difference. A little disappointing in an otherwise solid figure.  I will score accordingly though, because some figures don’t even get 20 points of articulation, so I will give Mattel some credit. 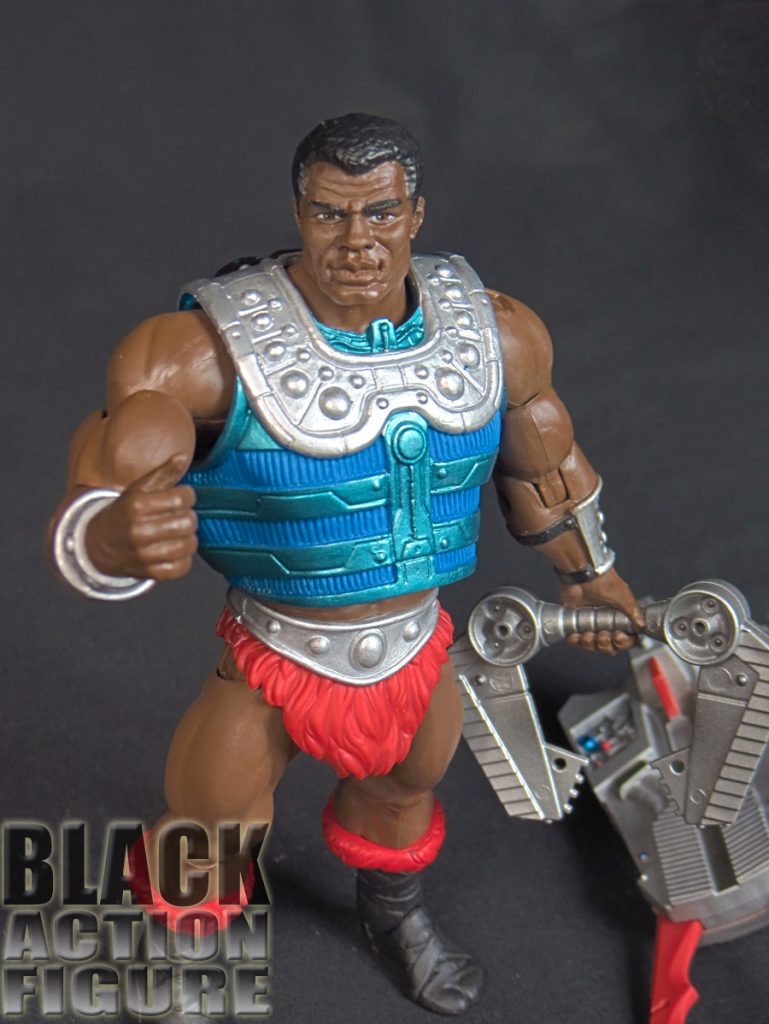 I don’t know if it’s because we’re more sensitive as adults but I am a little more than weirded-out at a half naked grown man running around in short-shorts battling evil with his half naked friends. I just don’t remember that when I played with He-Man toys back in the day. But today, it is a little more than obvious.

I do have to say that I hesitated for a long time before I got this figure. This figure came out four years ago in 2013 and I wasn’t willing to pay upwards near $50 for this figure ($35 for the figure and $15-$20 for MattyCollector’s exorbitant shipping and handling fees). Fast forward to the end of 2016 and (surprise, surprise) everyone is sick of taking MattyCollector’s shit and they have a going out of business sale. I was lucky enough to pick up three figures off of there at a price that didn’t make me wince (I think it was about $15 /figure).

If you get a chance to ever pick up this figure, he’s easy to recommend. An easier bet is his more up-to-date NECA counterpart (I would review it if I can find it in the house)…if you’re just looking for a nice looking statue, that’s more like it.  But if you want that 1980’s Masters of the Universe feel, this guy fits the bill.

Clamp Champ is definitely a champ…errr..winner in my book.