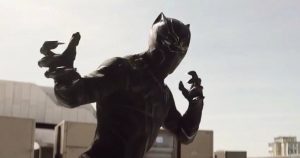 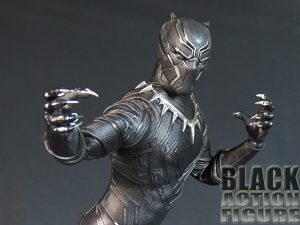 Let’s be real for a moment…no matter what I say, no matter what I criticize in this review, go out and get this figure. This figure is HOT (pun intended). It is selling out everywhere. Sideshow Toys has it on “Waitlist” and have removed it from their regular search tool, which is sometimes a good indication that this thing is going to sell out. A quick trip to eBay shows that this figure is already selling at a hundred dollar premium over the retail price.

Even though I named the Marvel Legends Black Panther “2016 BlackActionFigure.com Action Figure of the Year,” I’m pretty sure if this came out in 2016 like when it was originally planned, it would have been a strong contender for that spot. This 1/6 scale action figure made me glad that I skipped purchasing the SHFiguarts version…many of the reviews that I read online said that for the price, it under-delivered. Will this figure do the same? Check out the review and let me know in the comments or on Facebook if you were able to get your hands on one and what you think about it… 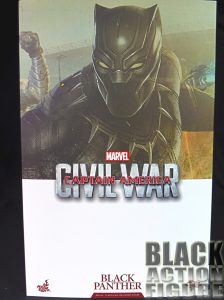 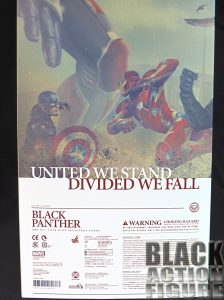 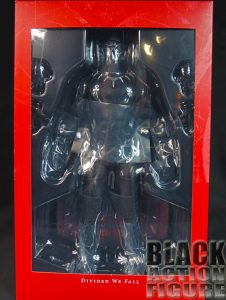 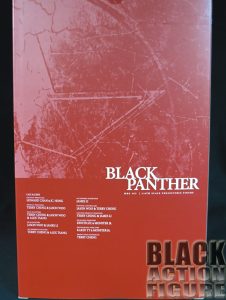 I always knew that some of the premium price that we pay for a Hot Toys figure usually goes into the packaging (along with licensing, designing, producing, etc.). In the past, I have always been impressed with Hot Toys packaging, but it has just been okay as of late. Don’t get me wrong, it is still nice, and definitely beats out some of their third party competitors like Art Figures or Subway Toys, but I feel a little lacking. I remember opening the War Machine (or Iron Patriot) packaging and just feel like I was blown away. With this packaging, I feel like we’ve seen it before…

The packaging consists of a top sleeve that slides off revealing the main box with a picture window showcasing the figure inside. That’s okay, but I feel like we already got that with the Guardian of the Galaxy figures. I guess I kind of expected with a new movie comes a new box design, but unfortunately that wasn’t the case. I do hope that in the future this changes.

With that being said, the top sleeve looks great with Black Panther readily showcased on the front and an artist rendition of the Civil War movie on the back and sides of it. Looks nice, but of course I was ready to move on so I quickly slipped it off.

Underneath the sleeve, we get a window box with our first look at the figure. My first thought was “who would want to see their figure hemmed up like this?”  I guess if you would like to display it in the box, you may still want to open  the box and remove all protective pieces of plastic and styrofoam packed with the figure.

The back of this window box was kind of nice. I don’t know if I was taking my time with the photo shoot or just didn’t care enough in the past to notice, but I always wondered who were the talents that went into making this figure, and right there on the back of the box, you get the “credits” for the people responsible in the production. Nice! That saves me from a Google search.

All in all, nice packaging, but kind of a “been there, done that” scenario with it. So not a low score, but an average score to match how I felt when I started to open this package. 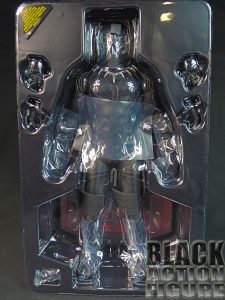 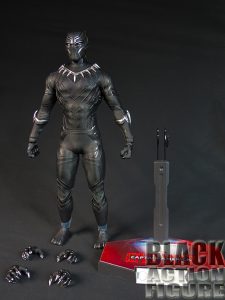 Man, the excitement of sliding that plastic out of the box was building. I couldn’t wait to see what came with this figure. I couldn’t exactly remember was coming with the figure, but I knew whatever it was would be badass. But then I looked at the front of the figure insert…

To my immediate disappointment, I only saw two pairs of hands. I mean, surely the rest of the accessories would be embedded on the bottom right? I opened the plastic and continued to be disappointed…all that was underneath was a figure stand and the instructions. I almost shouted “why the hell are there instructions? There’s nothing to instruct…”

The stand is actually pretty nice in its basicness. I love the name plate on the front and I like the design on top. I guess it will get used.

To be fair, the panther costume is probably the biggest accessory. This non-removable (or at least they warn us heavily against removing it) uniform is made from a pliable rubber-like substance. There are many warnings in the instructions against scratching it, tearing it, or wearing it down if posing the figure too much so take caution.

I think in the very least especially for the cost Hot Toys could have included a head sculpt. Granted, this may have delayed the figure even more, but it would have been worth it (see: Hot Toys Drax). Speculation on the missing head sculpt is that Hot Toys is waiting for the Black Panther movie to introduce a maskless Black Panther. Hopefully this test run proves fruitful for the next go around. 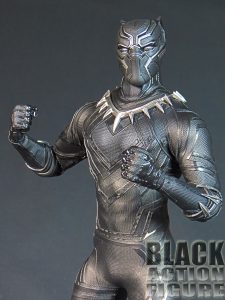 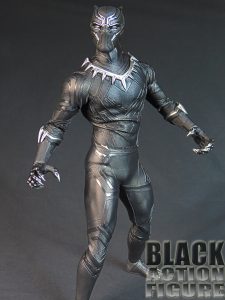 This is the part that was easy from the time I took the figure out of the package…and what Hot Toys thrives in making happen. This figure sculpt and likeness are directly from the movie. From the sculpting of the designs and patterns in his costume down to the pointy tips of the figure’s claws. This is movie-accurateness to the nth degree.

What makes it even better is that the Panther outfit on the figure also hides the seams to the figures arms, making this figure almost seamless. And when we pose the figure, the outfit responds exactly as you imagined it would.

No hate towards Hasbro Marvel Legends which did a damn fine job at a tenth of the price of this figure, nor no shade towards Bandai and their too expensive, under-developed SH Figuarts figure, but this Hot Toys figure is and will be the definitive Black Panther figure to beat, hands down. And what’s nice is that they can only go up from here…adding more accessories and a “hell yeah that’s Chadwick Boseman” headsculpt (missing one here will lower the score I want to give it). 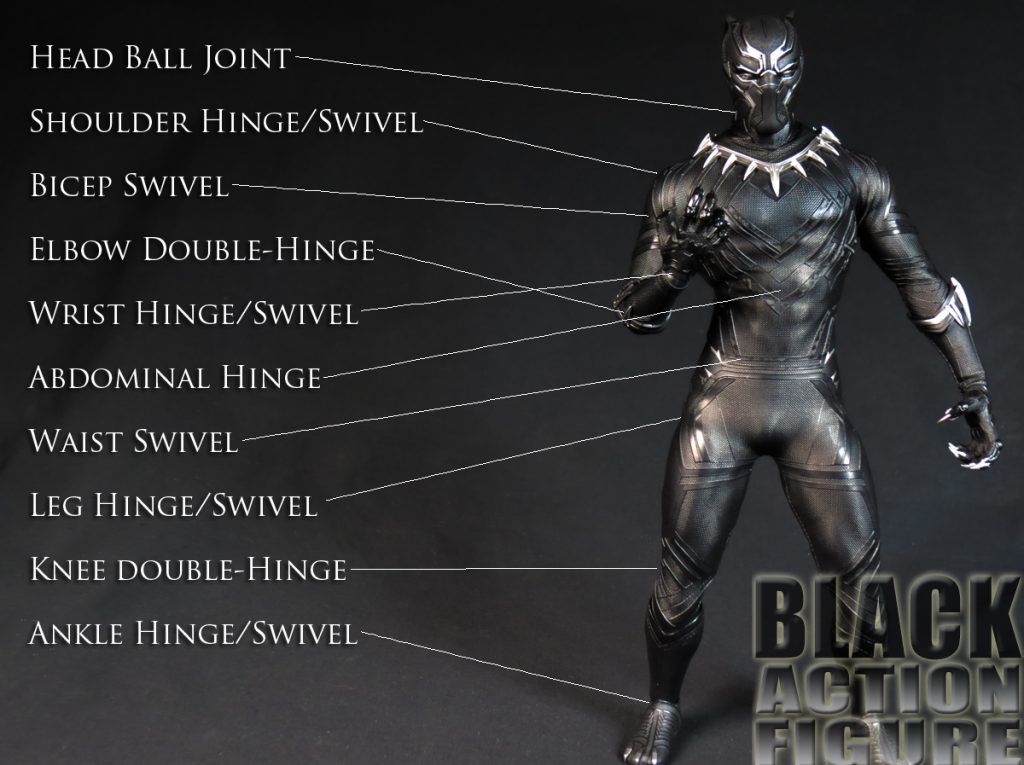 This figure features 30+ points of articulation (as it damn well better being a Hot Toy). As you can imagine though, that rubber-like suit on the figure while fitting well with the figure itself, it hinders some of the motion of the limbs like in the shoulder and leg area. It was enough to be annoying especially when completing poses during the photoshoot, but it was okay enough to look past sometimes.

However, with someone with claws, the natural inclination is to want to have an overhead swinging of an arm in a downward stroke, and this figure with the tight suit will not be able to achieve that.   Better to keep all action poses either shoulder-level or below. 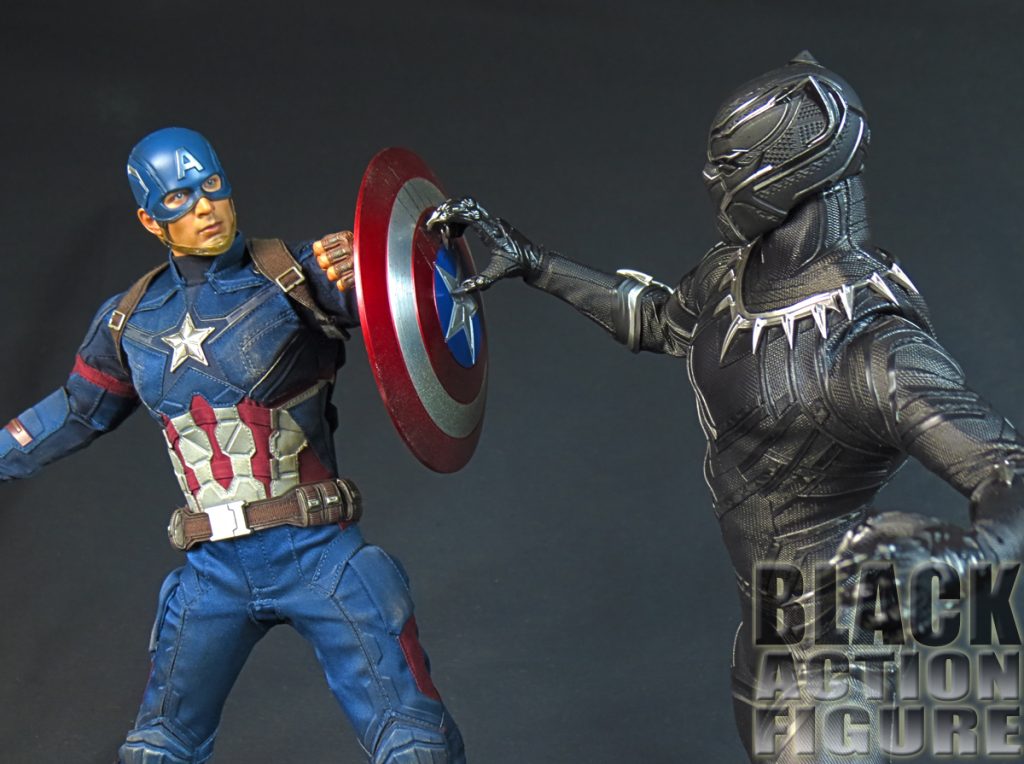 This figure was definitely in the running for last year’s award and was on the way to competing against another latecomer, the Falcon figure (which by the way is sitting on my desk ready to be reviewed).

I was actually hoping with all of the delays that Hot Toys would reward us with something cool…but it wasn’t meant to be. Still it is a solid figure. Paired with the Special Edition Captain America with the claw scratched shield, it makes for a great pose to sit on my shelf.

I can’t believe this figure has already been through and sold out at most major online markets. There’s no denying that this is a cool-ass figure, but I’m pretty sure that Hot Toys will check that mark in their notebooks and will definitely have more iterations of the Black Panther as they are introduced on screen.

You know what I thought of that I would like to see? Black Panther vs. Batman…now that’s a billion dollar idea. Marvel and DC take note…DC needs to be taking the most notes anywhere and everywhere…

This is the part where I would normally say something like “Hot Toys Black Panther is now available everywhere!” But I have no idea about how you can get your hands on one outside of paying exorbitant amounts on eBay. But I’m sure if you’re lucky, you could always find a comic book store or small online retailer that still has one for retail pricing.  Good luck! 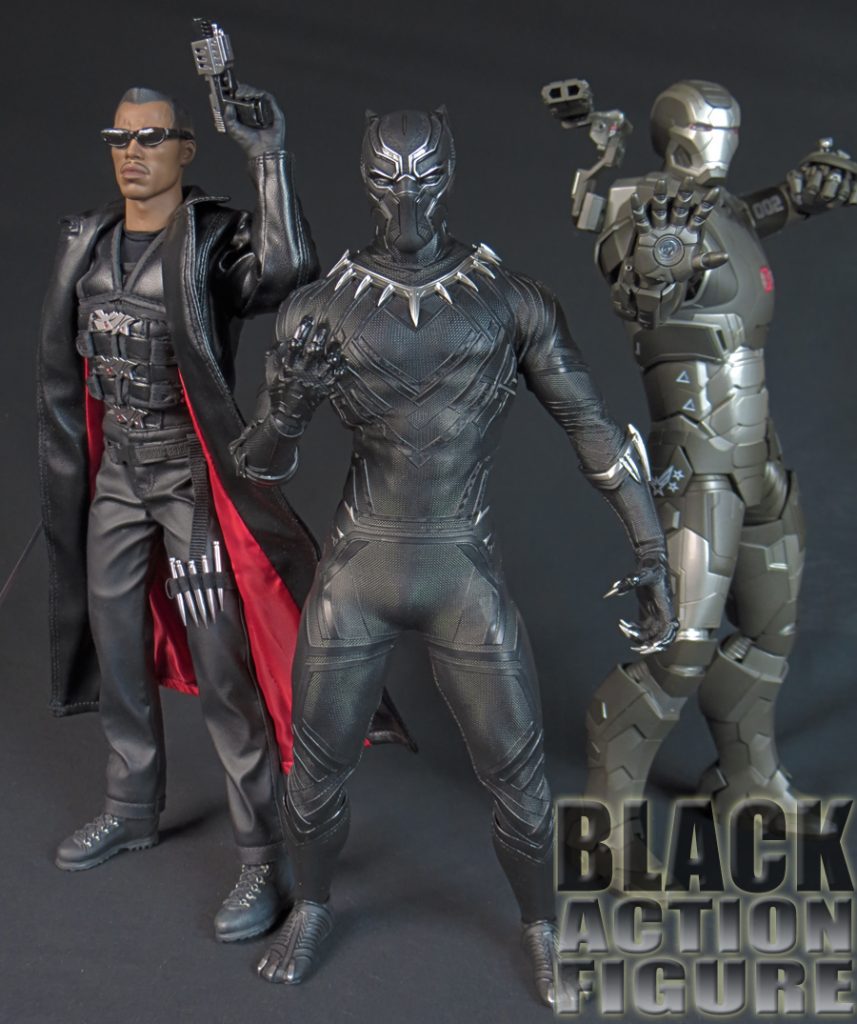