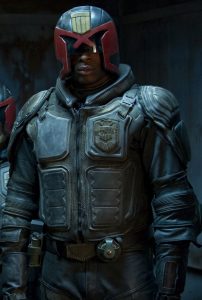 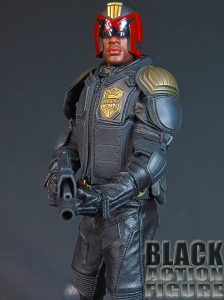 Okay, okay, I know you’re like “Who the hell is this?” and “Where’s this guy from again?” Well if you think back to 2012, Karl Urban played in a movie based on the comic book character Judge Dredd simply titled “Dredd.”  It had a lot going for it as it was a hyper-active rated “R” violent gorefest that quickly overshadowed Sylvester Stallone’s 1995 campy “Judge Dredd” movie. So now you know which movie this guy is in…I bet you’re wondering where he is in it?

Well, if you have seen the movie, over halfway into the movie, some dirty “judges” came into the building to kill Dredd and his partner. And if you can recall, Alvarez was one of the dirty “judges.” Now here is where it gets strange. Alvarez was played by an actor named Edwin Perry. But from a little Googling around the internet, I can’t find Edwin Perry’s real face anywhere…he’s only credited to this one movie on IMDB. And there is no other picture of him anywhere…it’s a little weird and disconcerting. (if anyone knows this guy, contact me…I would like to interview him).

I rewatched the movie to see if his helmet ever came off…and it didn’t. So guess what? The figure’s helmet doesn’t come off too.  One of my first disappointments when opening this figure.  How does the rest of the figure rate? Check out the review and let me know down below your thoughts… 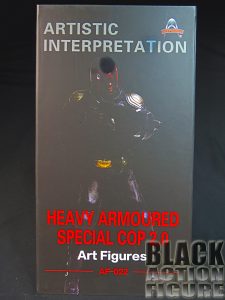 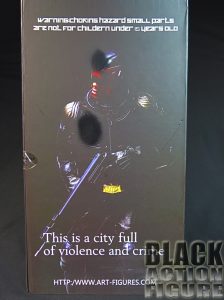 Having freshly come off another Art Figures box (Art Figures Dead Soldier reviewed here), I knew not to expect much. But when I first opened the box, I originally wondered who in the hell left an oil smudge on my box! Then I noticed it…there were several “oil smudges” on every side of the box, and seemingly strategically placed. 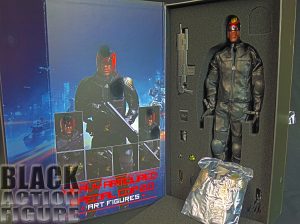 It was then I realized that since this was an unlicensed figure, to avoid a possible lawsuit, Art Figures strategically marked out the badges that would relate this back to the movie. But of course, who in the hell are they trying to fool? Really not sure this made a difference and just resulted with a marked up box. Other than the markings, the box is fairly boring and could have been designed by any fourth grader with access to Microsoft Office.

The inside of the packaging proved to be a little better. We still get the annoying smudges blocking [badly] all of the badges.  But at least this time the picture of the figure is in front of a city-like blue background. Much better than the outside.

The figure itself is protected with the foam most common with these third party 1/6 scale figure makers. Which is fine by me. 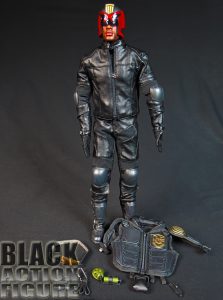 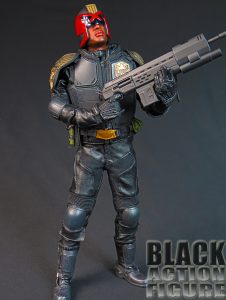 This figure thankfully did not come with a billion accessories that had to be meticulously placed or would shatter with slight pressure. I believe I was able to put on the accessories in about 20-25 minutes and continued on with the photo shoot.

This figure comes with a security vest, a grenade, a first aid kit, handcuffs, another side pack, what looks to be a can of mace, a clip-on knife, and a giant semi-automatic shotgun. I of course don’t remember all of this on him as he had very little screen time, but seeing that this is actually Art Figures third figure from that film, they were pretty accurate with some of the details.

What I mentioned in the intro definitely freaks me out the most…and not in a good way. This figure’s helmet doesn’t come off. Which is mostly disappointing.  I’m pretty sure this was done since his helmet never left his head during the movie and like myself, they had no freakin’ clue what the actor looked like. Otherwise I bet they couldn’t find a picture of the actor either after Googling him.

Noticeably missing from the accessories are extra sets of hands that normally come with 1/6 scale figures. But just like I discovered on the Dead Soldier review, this figure’s hands were bendable. I really don’t like this feature, but I guess it helps them from including a billion different hands. 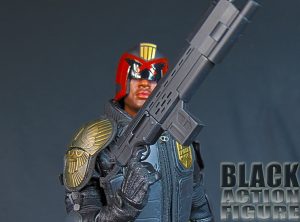 Besides the fact that there are no real shots of the actor who portrays this character, the sculpting of this figure and the likeness to his film counterpart is eerily accurate. The most impressive piece on the figure is the badge…you know, the one that’s been oil-smudged out of every shot.

The shotgun itself, although it comes with no paint apps to help it look more realistic, is pretty detailed and looks good in the hand. And the detail of the other accessories definitely lend to the authenticity of the character itself. 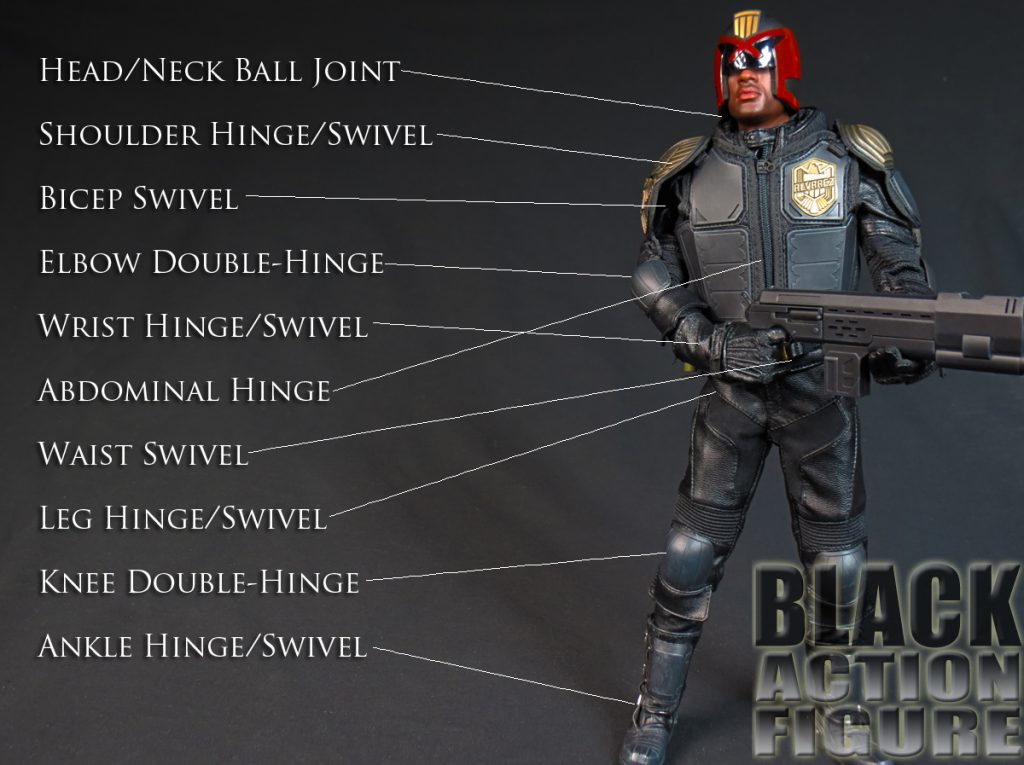 This figure has a pretty 1/6 scale standard 29+ points of articulation. What I like the most is that the figure’s pants and clothing in general allow for some freedom in it’s range of motion. The security vest however dampens some of that mobility especially around the shoulder area. 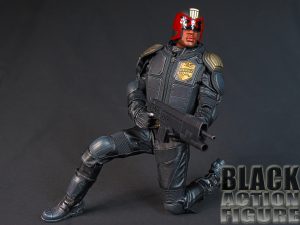 I really need to mention the articulation in this figure’s bendable fingers. I don’t ever think Art Figures or any other respectable company needs to include bendy hands with their figure. The bendy hands made it extremely difficult for the figure to hold it’s weapon. What makes it semi-acceptable is that the hands are mostly commonly used to hold a two-handed weapon, so posing the figure with both hands holding the shotgun is wholly acceptable. 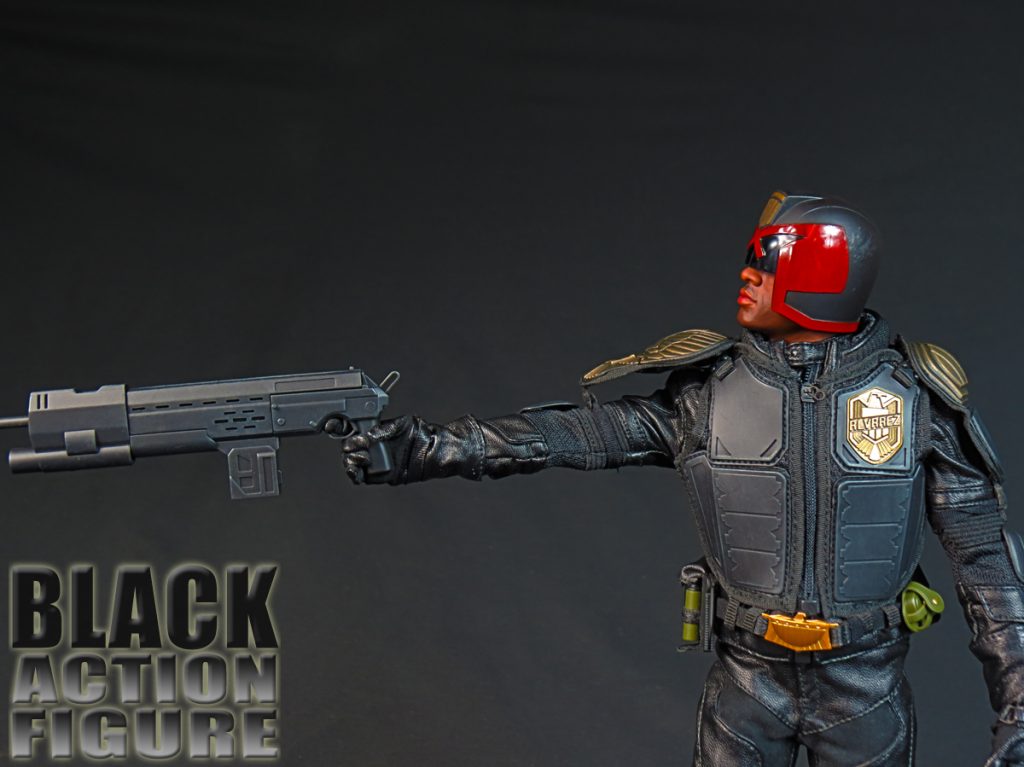 Companies that make unlicensed characters are funny sometime with the need they fill. They fill some pretty big holes and gaps in collections that may never see the light of day in plastic form.

With that said, I never thought in life that we would get a figure of an obscure character from a movie that only made $40 million domestically. And yet, I welcome this addition into those collections that are made up of Judge Dredd characters, or like myself, collections made up of seemingly random franchises starring Black characters.

This will make a great addition to anyone’s collection…