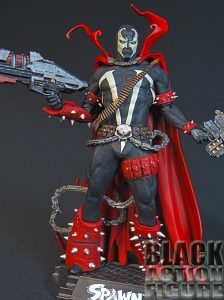 I remember back in the 1990’s when McFarlane Toys first started and the quality toys they put out then. They were easily then what NECA is today. They were the go to for beautifully sculpted toys. Unfortunately (or fortunately depending on the point of view), they were known back then as little more than “articulated statues”…once they get posed and placed on a shelf, they most likely remained.

Fast forward to today past all of the Spawn figures, Assassin’s Creed figures, and Walking Dead figures and McFarlane Toys have gone full circle (actual, they’ve probably gone full circle several times now in the past 20+ years). We now get a new Spawn figure, and lo and behold, it is actually a slightly “articulated statue”…this time on purpose!

It seems McFarlane Toys has given into what they do best, create beautifully made figures/statues…and now that their core audience (like myself) is potentially 20 years older than when they first started, many of them (us) really appreciated a beautiful statue…I now own several of them done by different companies. McFarlane Toys was pretty wise to produce a 7” statue that is easily collectible, keeps a fairly smaller profile, and costs under $20, in most places cheaper than a Marvel Legends figure.

From what I remember, Al Simmons was a former soldier killed in action and made a deal with the demon Malebolgia so that he could come back to life and be with his wife. Unfortunately, it wasn’t a well-planned deal…Malebolgia brought him back to life as one of his Hellspawn (or Spawn for short) and also brought him back several years after his Earthly death, when his best friend has married his former wife.

This Spawn figure features all of the great iconic sculpting that originally put McFarlane Toys on the map. Unfortunately for me, the articulation is held at a minimum with only 3 points of articulation (elbows and neck). The accessories are great with two pretty large weapons, but a huge minus when trying to place those weapons into his hands…with little to no force, the left hand broke off its joint….so now out comes the superglue. I was able to get it back on without much hassle, but it’s pretty discouraging that 20+ years and we have an issue with quality control.

All in all, a solid figure/statue and would look great on your desk. I noticed that Amazon has it for over $20, but BBTS.com and some Target stores I’ve seen have him listed as $17.99 or lower. Let me know what you think about him in the comments below… 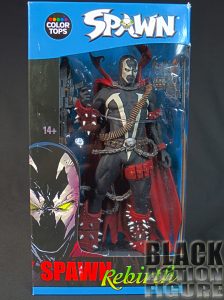 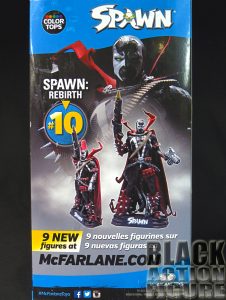 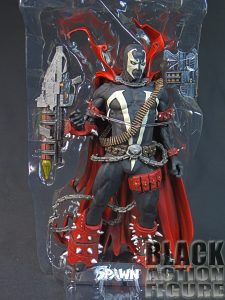 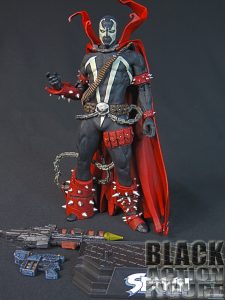 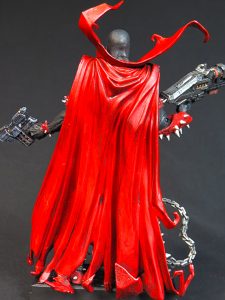