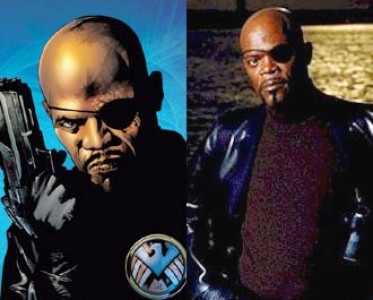 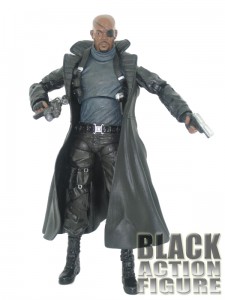 So about 3 weeks back I declared it was Samuel L. Jackson week and reviewed the Shaft figure.  Well, things obviously did not go as planned and while I was able to get a few posts out, I did not get to review another figure.  I actually have a couple of more figures to review and this one was to be last, but I decided to go ahead and jump to this because I have a bunch of reviews waiting to happen.

Anyway, this figure is the 6″ Movie Nick Fury, played by Samuel L. Jackson.  This version of Nick Fury is actually based on the Nick Fury in Marvel’s Ultimate line which in turn was based off of Samuel L. Jackson’s likeness. (confused yet?)  So in actuality, who better to play Nick Fury than the man that inspired the original design?  And before you go there, yes, Nick Fury is White in the regular Marvel Universe, but the Ultimate storyline knew no boundaries and did what they wanted within reason.

This figure was a Walmart exclusive.  The 3.75″ version of the same character is a Toys R Us exclusive and was on my list to review (that may still happen in the future).  This one came out towards the end of 2011 along with an Ultimate Captain America figure and a Movie Captain America figure.  These figures did not stay on the shelves long.  After initially selling well, they soon became peg warmers and Walmart quickly and quietly made them disappear.  If you’re lucky you may still see one in stores.  Luckier yet, (blatant plug) if you can get either my Facebook Fans or Twitter Followers up to 100 or more (either/or), this will be one of my giveaways.  So if you weren’t interested in buying the figure or missed it in stores, get some friends to join up in the fun!

Okay, enough of that.  … Let’s try that again.  This 6″ figure, while not officially designated a “Marvel Legends” figure, scales well with the rest of the Marvel Legends line. 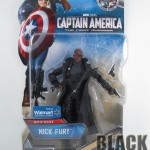 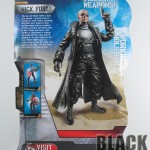 Packaging
All packaging in this short-lived series features a picture of the movie version of Captain America and has the movie title along the top.  Towards the bottom, the official “Only at Walmart” sticker appears along with the name of the figure.  Nothing too exciting.  The back of the packaging is a little more exciting with a full size picture of Nick Fury along with a little story blurb.  Also pictured are the two other figures in the lineup.  Better than the front, but still nothing special.
Score: 6.5/10 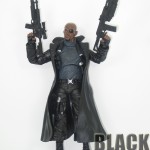 Accessories
I’m fairly impressed with the accessories in this world of less and less pack in’s.  This action figure comes with two semi-automatic pistols that fit in the shoulder holster and the leg holster, and it also comes with two separate military-grade rifles.  I guess if you have no super-powers, you want to make sure you can at least pop a bullet in da ass.  What would have made this figure even better is if he came with a figure stand.  The coat makes it a little hard to balance the figure and it is naturally hard to find stands for 6″ figures.  So taking a little off for that, but otherwise, not bad.
Score:  8.0/10

Articulation
Marvel Legends articulation has always been top of the line and this figure is (almost) no exception.  This figure has around 20 points of articulation, but what makes it hard is that his trench coat restricts a lot of it.  He can’t use his abdomen articulation and his arms do not go all the way down making some poses a little impossible.  As mentioned above, the coat also causes some balance issues and I had a hard time moving the legs around to find a balanced stance.  The coat looks badass, but takes some points away from making it so hard to pose him.
Score: 7.5/10 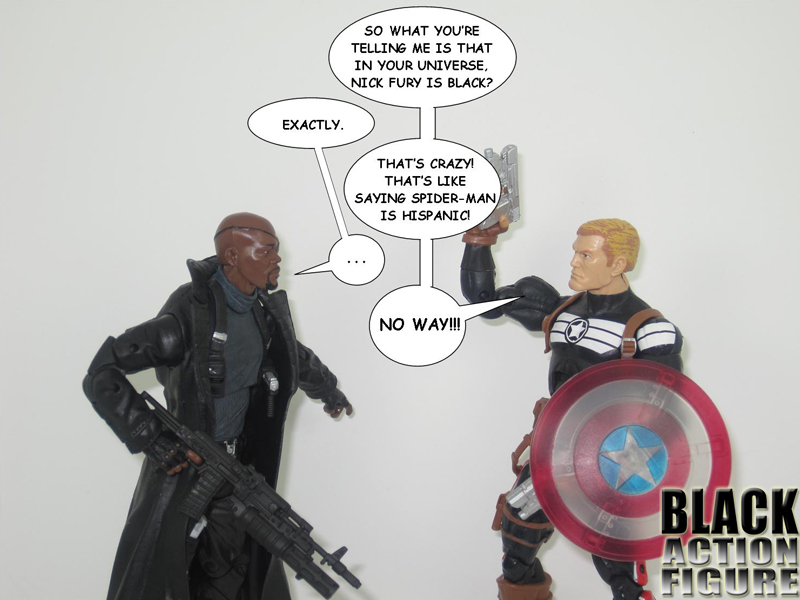 So all in all, a pretty well rounded figure.  Like I mentioned previously, it goes well with the Legends line and can fit right in especially with the new updated Marvel Legends.  It’s too bad this went away so quickly in the stores especially since it ties in well with the upcoming Avengers movie.  Makes me wonder how the Iron Man 2 line can sit on the pegs for almost two years, but this one comes and goes under 6 months.  If you see it, pick it up.  Give it a couple of years and it will definitely be a collector’s item, especially since Sam Jackson will be showing up in most of these Marvel movies in the foreseeable future. 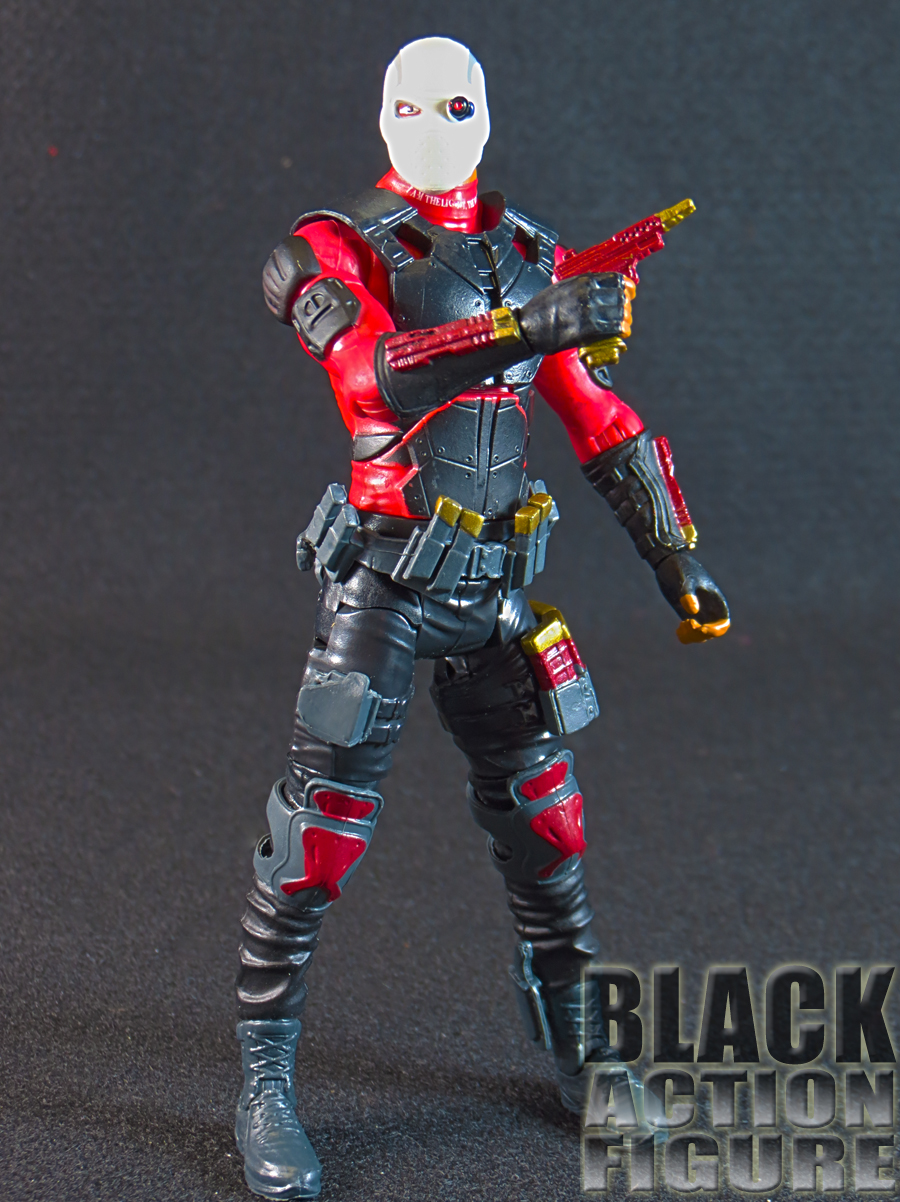