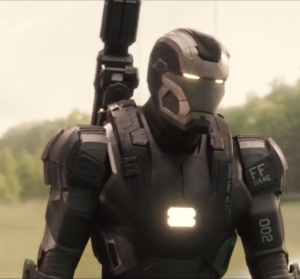 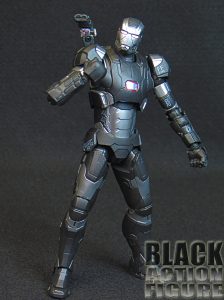 I told y’all I had a lot of War Machines that needed to be reviewed. But I’ve almost worn out my welcome in the “War Machine” review space, so this will be the second to last review for a while for War Machine (then maybe I can build up my backlog again).

This time around we have the Play Imaginative premium version of War Machine. The box states that it’s War Machine from the Iron Man 3 movie, but as we know, the War Machine scenes were cut from that movie, so of course the picture above is from Avengers: Age of Ultron.

Play Imaginative itself is an interesting story. After experiencing literally years of delays on promised figures, Play Imaginative spun off into another company called Comicave and mysteriously starting producing Iron Man action figures again. These action figures are also around 70%+ made of diecast metal, which makes it almost a smaller version of a 1/6th scale Hot Toys figure. They also have a lot of the Hot Toys extras: weapon-fire attachments, tons of extra hands in various poses, a figure stand, and the figure itself features light-up eyes and chest piece. So with all of these extras, will this 6″ figure review as high as it’s 12″ cousin? (short answer: probably)  Check out the review ahead… 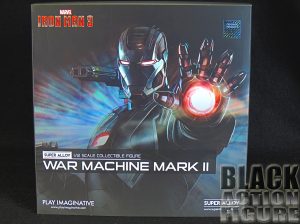 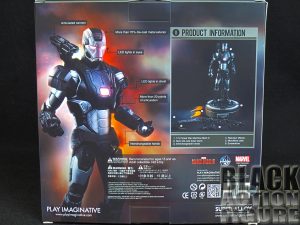 Premium figure? Premium packaging. I hate to compare it to Hot Toys over and over again, but the packaging is more Hot Toys than it is Marvel Legends. So some of that money going into the purchasing of this figure is definitely being poured into the packaging.

We get fancy War Machine art with a hologram foil sticker in the corner and the appropriate branding. On the back, we get a picture of the figure itself along with some of the features. A separate side picture shows off the tons of accessories that also come with this figure. 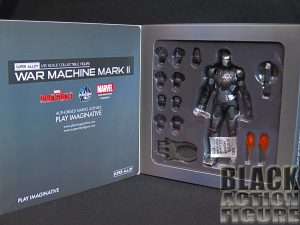 But that’s not all! We also have the ability to open the front cover of the box to reveal the figure behind a plastic window which is almost common with Asian action figures. So if the pictures on the box don’t convince you to pick up this figure, hopefully seeing the actual figure and accessories themselves would do the trick.

I will definitely keep the packaging around not only because it can store all of the extra accessories this comes with, but also because it looks great (and could possibly add to the resale value at a later date). 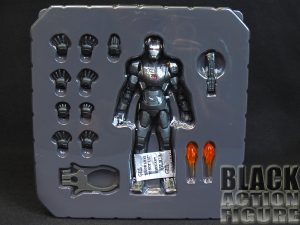 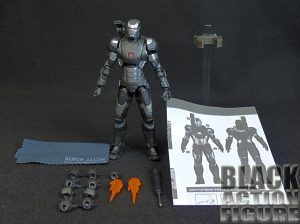 Have I mentioned how many accessories this thing comes with? This figure comes with four pairs + 1 extra hands, two weapon-blast effects, a figure stand, a microfiber cleaning cloth, a mini-screwdriver (to replace batteries in the figure if needed), the shoulder-cannon, and a set of instructions. Definitely a “Hot Toys” set of accessories.

The hands are easy to pop off and pop onto the wrist ball joint. The weapon-blast effects fit easily and semi-securely into the pair of hands that support them.

The shoulder cannon, a staple to any War Machine action figure, is nice, but a little hard to maneuver.  The joints are kind of too tight, and turning and twisting it can become a chore sometimes. It can go over either shoulder, but is not secured in a way that would keep it mounted on the back of the figure indefinitely. If you pick up the figure the wrong way, it may pop off. If you pose the figure a certain way, it may pop off. Etc.

Minor gripes, but overall a fantastic set of wonderful accessories that made even taking the photos better and more enjoyable. 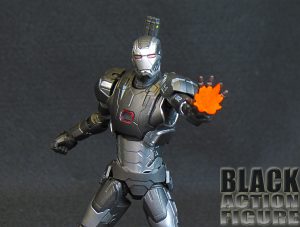 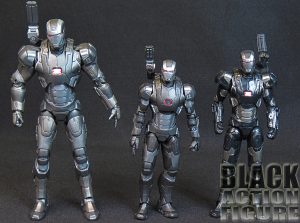 Another great attribute of the figure is the accuracy of the sculpting. Like both its Marvel Legends and Marvel Select counterparts (seen in the picture on the right), the sculpting and detail are pretty accurate to the original War Machine. Taking a look at the picture you can see that all three sculpts hold to a specific form and only variate slightly between the three.

The PI (Play Imaginative) figure is the shortest of the three, although it is supposedly roughly the same scale as the Marvel Legends figure. I think licensing dictates that it doesn’t compete directly with the Hasbro Marvel Legends line and so Asian 1/12 scale figures are always slightly smaller than the 6″ Marvel Legends. (or maybe Marvel Legends are just slightly taller)

Like the Marvel Legends figure, the PI figure has more accurate decals applied to the armor than the Marvel select figure. The PI figure also has an electronic portion to it, allowing the eyes and the chest piece to light up. The other two figures have either painted eyes and chest or decals as well, make it look decidedly cheaper than this figure.

The biggest omission which is almost forgivable is the lack of an extra head with the Don Cheadle likeness. Both the Marvel Select figure and the Marvel Legends figure came with an additional head, but this one did not. Of course the reasoning behind it was because the wiring in the head that allows light up eyes would not allow for this head to come off and an extra head to be put back on. Still disappointing. 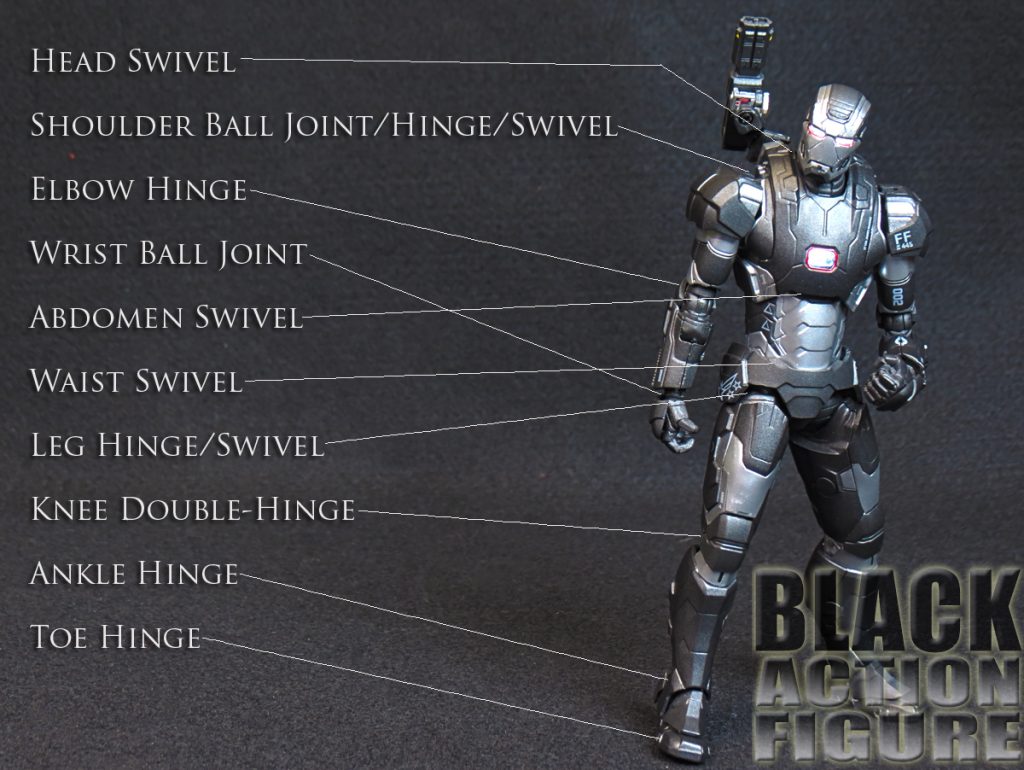 The back of the box makes claim that this figure has more than 20 points of articulation. After dealing with the Marvel Select and the Marvel Legends figures, I was pretty prepared to be disappointed. Luckily I was not. 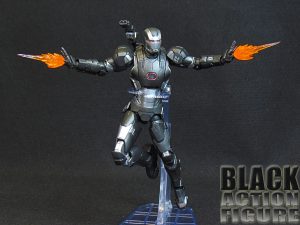 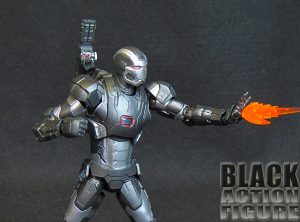 This figure features about 25+ points of articulation.When I started posing the figure, I was amazed at how good and natural some of the poses looked.  The weight of the figure due to the diecast metal, also made the figure fairly sturdy and easy to stand. Unfortunately the same weight did not allow for great “aerial” poses since the stand could not fully support it, but it was fun posing either way.

Some of the points of articulation were so good that I felt that there may have been more than one point. For example, the elbow bent so deep I thought it was a double-hinged elbow. It wasn’t until I put a little attention on it that I saw that it was just a cleverly built single-hinged elbow.

On the negative side, the head does have limited articuation due to the wiring inside. The figure cannot look up at all and is supremely limited in trying to look down. The ankles are also limited due to the armor, much like the Select and Legends figures.

An added plus is the triple-articulated shoulders. The arms are connected with ball hinges that allow the arm to come across the body more naturally. The hinge and swivel allow it to do everything else.

Great articulation and the natural movements made this a pleasure to pose. 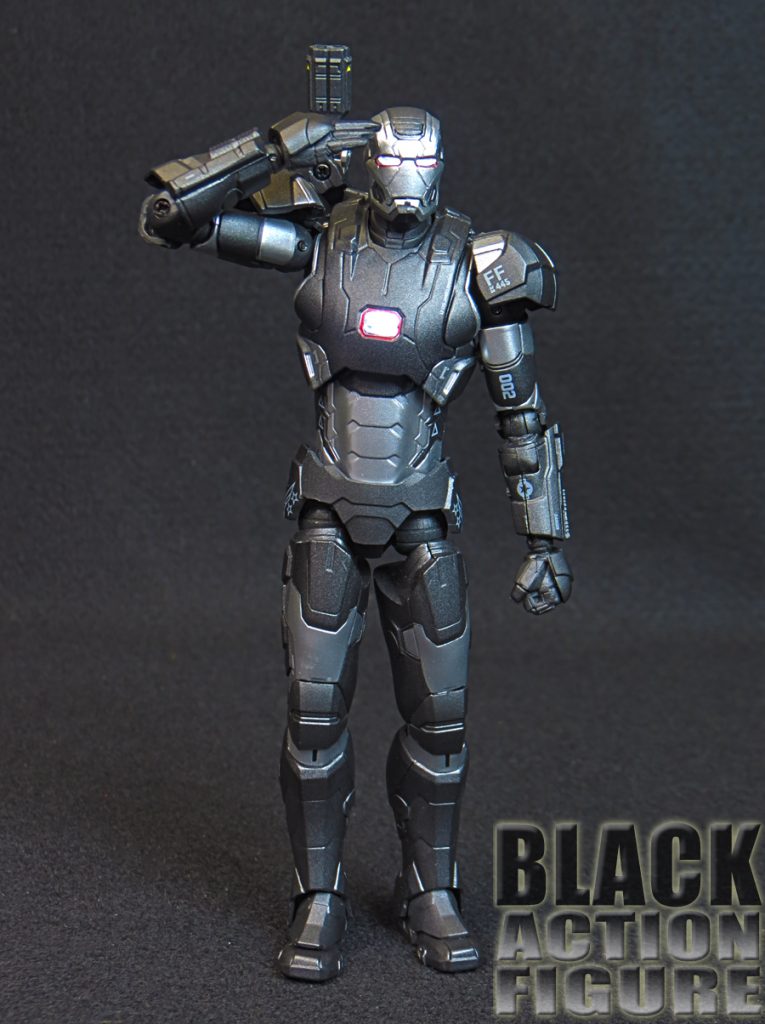 I remember first getting into War Machine and learning his back history. This man was in every way better than the original, but was never really put into the limelight.

I’m glad with the recent onslaught of Marvel Cinematic movies, we’re able to enjoy a character that deserves the praise. Although the character itself went through some changes in terms of actor (Don Cheadle vs. Terrance Howard), and some design choices (Iron Patriot in Iron Man 3), I’m happy that the War Machine license was able to rise above all of that to become a permanent and necessary residence in the MCU and the comic books.

Despite the characters downfall in Captain America: Civil War, I hope to see a resurgence in future films and continue to collect figures in the years to come.