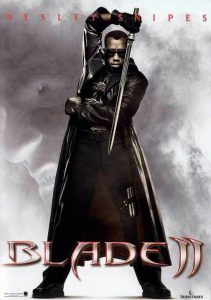 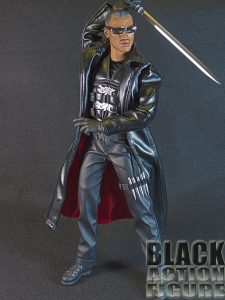 I remember when I purchased my first Hot Toys action figure, which coincidentally was the only figure I have given a perfect score on here – the Avengers Nick Fury (actor Samuel L. Jackson). I remember how exciting and new it was to enter into the realm of high end collecting. I wanted to keep getting that feeling and searched for more. The only other Hot Toys figure I wanted at the time was their Blade from Blade II figure. It had the potential to be as good or better than the Nick Fury figure. Unfortunately I missed out and I refused to pay eBay prices…

Forward to about a month ago…I found out that some company had copied…okay “bootlegged”…the original figure. And I was as surprised as other collectors that it was actually a decent figure! I knew this was meant to be…

So how does this figure live up to the hype of the original and is the quality what we have come to expect from a true Hot Toys figure? Let’s find out in the review… 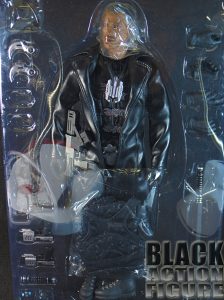 Okay first off you know I have a right to be suspicious…the figure came in a dilapidated cloudy plastic box. I wasn’t expecting an actual Hot Toys box, or a copy thereof, but something other than this would have been nice(r).

Taking the figure out of the first box, I come to a plastic enclosed package of the figure and accessories. Right away I can tell it is not very secure by how some of the accessories were free enough to move around inside. A quick visual check shows me that I have everything that it is supposed to come with, but seeing it end up like this is a little unnerving as I wonder what I have gotten myself into.

Luckily, everything came in tact. Most of the accessories were held in by a strip of clear tape. Pulling everything out reveals that nothing has been damaged in transit. With that in mind, I can still provide this almost inadequate packaging some type of rating. 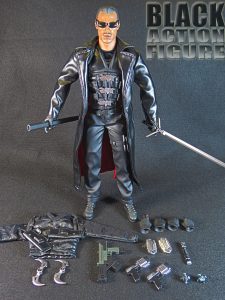 Well damn…if you’re going to be a Hot Toys bootleg, you better have the Hot Toys accessories to go with it…and the answer is a resounding yes.

With this figure we get almost all of the accessories that came with the original figure including sword and sheath, an exchangeable sword hilt (with the security blades extended), two wrist blades, two sunlight grenades, two throwing blades, two pistols, a short jacket with gun holsters, a larger automatic weapon, five silver stakes, two pairs of extra hands, and his signature sunglasses. I believe the only thing missing is another pair of extra hands, but believe me, I’m okay with that.

The only other thing I could possibly consider accessories is the movie accurate clothing. the jacket, vest, and pants work extremely well, even more than I could have imagined a knockoff would.

The accessories are accurate, but not very sturdy. Keep some superglue on you, you may need it. Some of the connections on the accessories are loose and may fall off (mainly the guns). The holster on the back where you’re supposed to attach the sword sheath also fell off. But I forgive all of that. I’ll pull out the glue and make sure everything is secure.

One thing to note was that I was extremely nervous about taking off and replacing the hands, which anyone who has dealt with a 1/6th figure before this is probably the most likely place to experience breakage. Luckily, hands came off and snapped back on without too much effort. 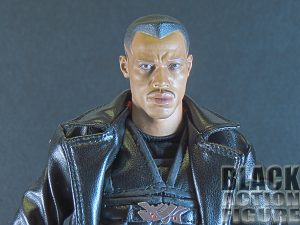 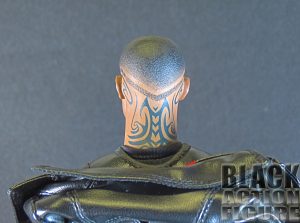 Let me touch on the head sculpt and likeness first: this IS definitely Wesley Snipes. It’s not like one of those Chinese knockoffs (that I may have purchased in the past) where you have to squint to see the likeness to the character. If anything, it’s almost like the manufacturer got their hands on the original mold.

And the painting is spot on. There are no visual mistakes that I can make out. You can even make out Wesley’s fade. And that tattoo on the back of the figure’s neck? Bad-friggin’-ass. This is looking more and more like this was worth the money.

Seeing that Nick Fury was my first Hot Toys figure, I came late in the game. I’m not really sure about the quality of the body being used here. It doesn’t quite feel like the same body type used for current figures, but it may very well be the body type they used back in the day when they made this figure. It seems a little loose and possibly too skinny in places, but most of that is hidden anyway by the superbly made, screen-accurate clothing.

If I were to pick on something, it would be the fact that the scale seems to be off.  Wesley Snipes is 5′ 9″, while this figure measures out to a full 12 inches…meaning that if this is supposed to represent Wesley Snipes, that would have made him 6′.  Maybe he’s wearing those “Prince” boots that give you an extra 3 inches. Yeah, that’s it. 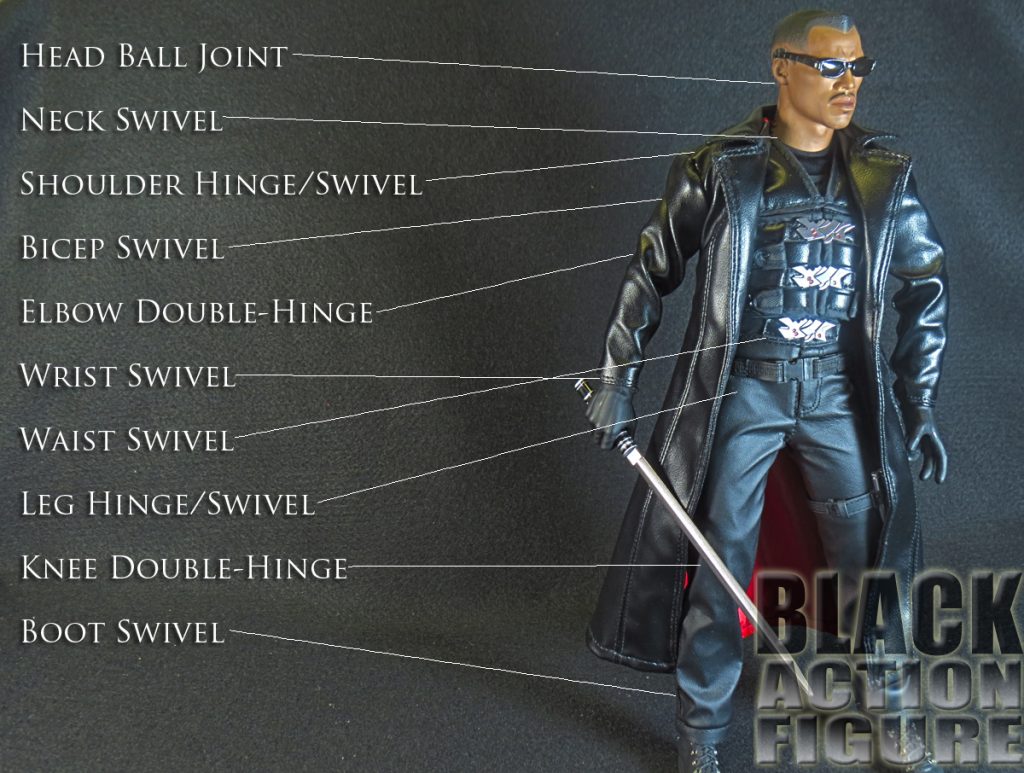 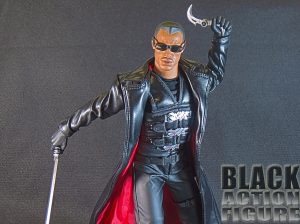 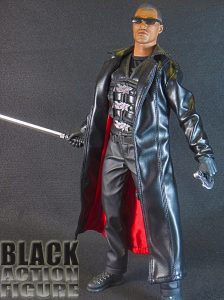 Another big deal about Hot Toys is the awesome amount of articulation that they put into their figures. Hot Toys figures are poseable as hell…and this figure doesn’t disappoint.

I couldn’t make out all of the articulation points since I didn’t want to really remove any of the clothing, but I would say this figure has a good 25 – 30+ points of articulation (from what I could make out).

I could basically put this figure in whatever pose I wanted too.  And the balance was good enough that I could get the figure to stay standing with little to no effort. Another plus in my book.

I like that the jacket and to some degree the pants allows the character to stretch and get into some of these poses. And with wiring built into his leather trench, it also complied to some action poses. There is some limitation due to the clothing, but not much. 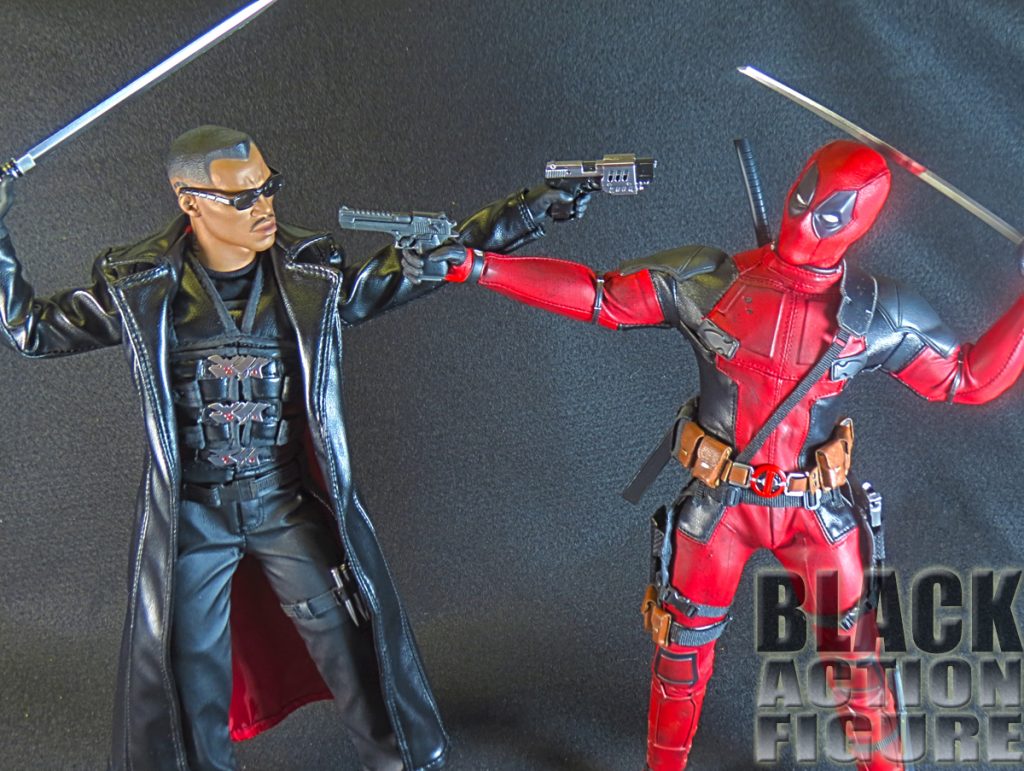 I can’t believe that I had the chance to add Blade to my collection. It is definitely a welcome addition. Maybe he’ll sit next to my Deadpool figure and they can reminisce about when Deadpool was just plain ol’ Ryan Reynolds and worked with (for?) Blade in the movies. Yeah, that would be something.

I could place him in my pending Civil War display. He’ll be on Cap’s side (if you care).

Better yet, I could do the MCU version of the Mighty Avengers/Ultimates. I’ll have Blade, Falcon, War Machine, Black Panther, Storm, and Luke Cage (you know a 1/6th scale Luke Cage figure is coming). Now that would be da shit.