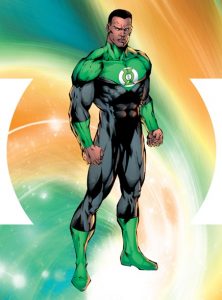 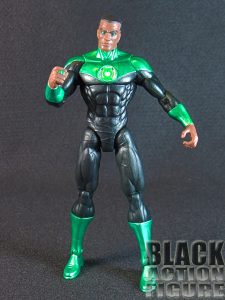 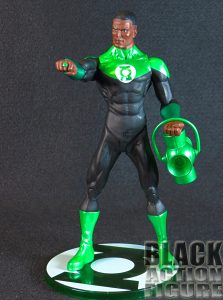 For years I wanted the John Stewart GL from the Blackest Night line back when DC Collectibles was still known as DC Direct in 2009. I tormented myself weekly looking at overpriced Amazon and eBay listings for this figure. I was determined to not spend over $30 for this figure (seen here on the right). I finally picked it up loose for about $20 on eBay. Then, right after I received that one, I picked up a carded one for $30 (again on eBay).

I was overjoyed. You couldn’t tell me nothin’! I had my definitive John Stewart figure that I was going to put front and center in my collection. I was grateful too that the New 52 happened and didn’t change his uniform. Perfect!

No sooner did I get my carded DC Direct Blackest Night John Stewart from 2009 that DC Collectibles announced a brand new New 52 John Stewart Green Lantern action figure. Was I kind of heated about it?  A little bit, since essentially it would be the same damn outfit I just got. But you know I was going to get it anyway. That was in November of 2015.

I am finally now getting to the point of wanting to open him and review the figure. At a glance, it is similar to the one that came before it six years ago. Now that I have it open, I see the differences and can now respect the pros and cons between the two. Let’s take a look at the DC Collectibles New 52 John Stewart Green Lantern… 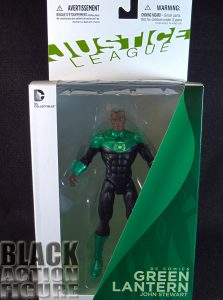 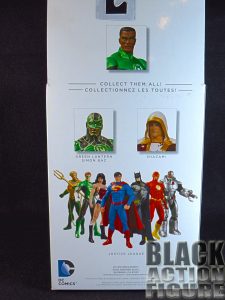 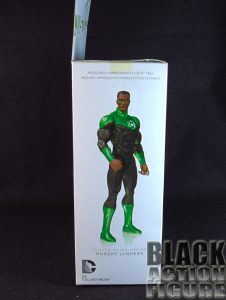 I believe this figure was one of the last figures to use this packaging before they switched it up to the current standard. I liked this packaging when it first came out because it was collector friendly, allowing collectors to either keep it in the box, or even take it out, check it out, then put it carefully back in the box for display purposes. It wasn’t perfect, but it worked for it’s time. The newer boxes are of course better suited for these purposes.

The one thing I really liked was the side panel to the boxes where they would share the original sculptor of the figure (in this case, Robert Lynders). It was interesting to compare styles and to quickly build a fan base on which sculptor worked on which figure. There were even times when I would do a quick Google search on a particular sculptor and find out more about his/her work. Fun times.

At any case, this was some okay packaging, but has quickly begun to show it’s age (quite literally as you can notice from the second picture that the tape on the box started to yellow). 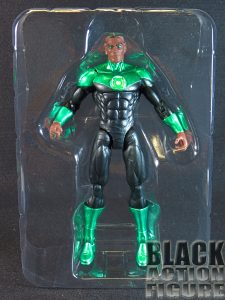 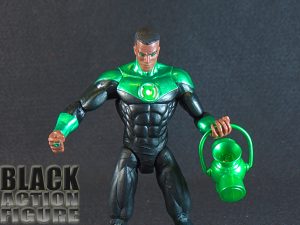 The biggest surprise came when I took the figure out of the package…and revealed NO accessories whatsoever. NONE! That is a super huge “WTF” in my book…

The Blackest Night John Stewart came with a Green Lantern battery and an action figure stand. Now I know companies are against putting stands in with their figures nowadays, but to not put in the damn Green Lantern battery?!  What the hell? We don’t even get a power ring construct…nothing.

To appease me, I took the lantern battery from my other Green Lantern figure and posed him with it. It’s almost a little too perfect because this figure has an open hand made for carrying the lantern battery…unlike his previous action figure incarnation.

The only reason I’m giving this category points is because the figure comes with an open hand. Nothing more to say about that except highly disappointing… 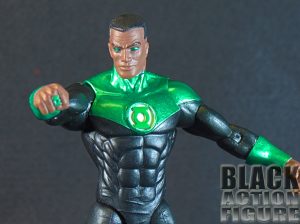 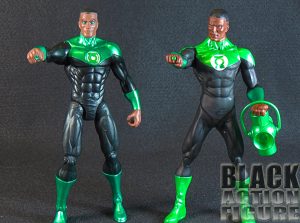 Phew, where do I go from here? I loved the sculpt of the previous Blackest Night John Stewart…but there is so much to love with this new one as well, as well as a couple of disappointments.

First change is the head sculpt. I actually prefer the head sculpt to the Black Night version…looks more intense. This new version has a more cartoony look to his features. I do like the green eyes though.

Next is the sculpting of his lantern emblem on his chest. The new one actually has it sculpted in while the older one only has it painted in.

Speaking of paint, instead of the muted, matte paint of the older figure, this newer figure has a glossy, more metallic look to it. The metallic green looks darker than the green on the older figure. Both of those make that a plus with me.

I have already mentioned the hands on this figure. Notice that on the old figure, both hands are closed, making it real hard to hold that lantern. The new one has an open hand, ready to snatch that lantern and claim it for himself.

And finally…the ring. On the older figure, we just get a circle, which always disappointed me. I always wondered why there couldn’t have been more detail on the item that defines their power set. Fortunately DC Collectibles heard my disappointment and made the ring on the new figure look like (gasp) a lantern! Is it a small wonder what good sculpting can do? 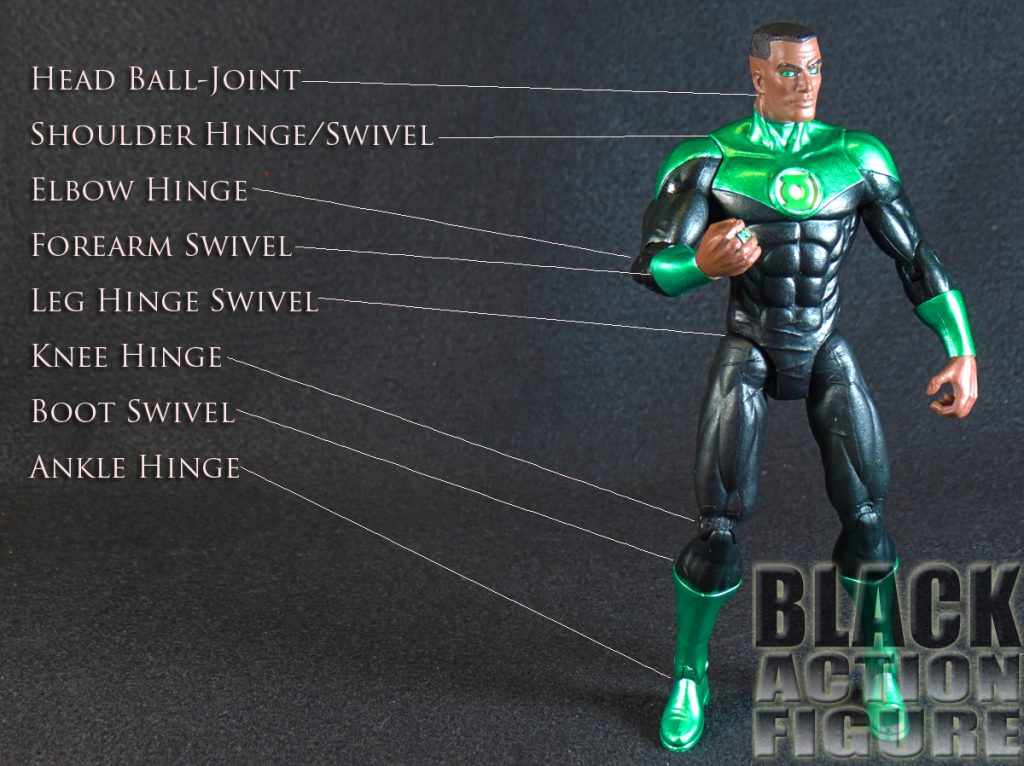 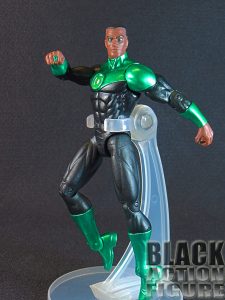 This figure has a disappointing, although not very surprising 19 points of articulation. Not much here to go on, which is fine because they didn’t give us any great accessories to go with it.

One kind of surprise was the boot swivel. I carefully twisted the swivel at the boot, thinking there really wasn’t anything there…but finding out that the swivel was just painted stuck. A little force and I now have some better leg articulation.

All in all, about par for the course with this particular line of DC Collectible figures. Their Icons line will feature more articulation. 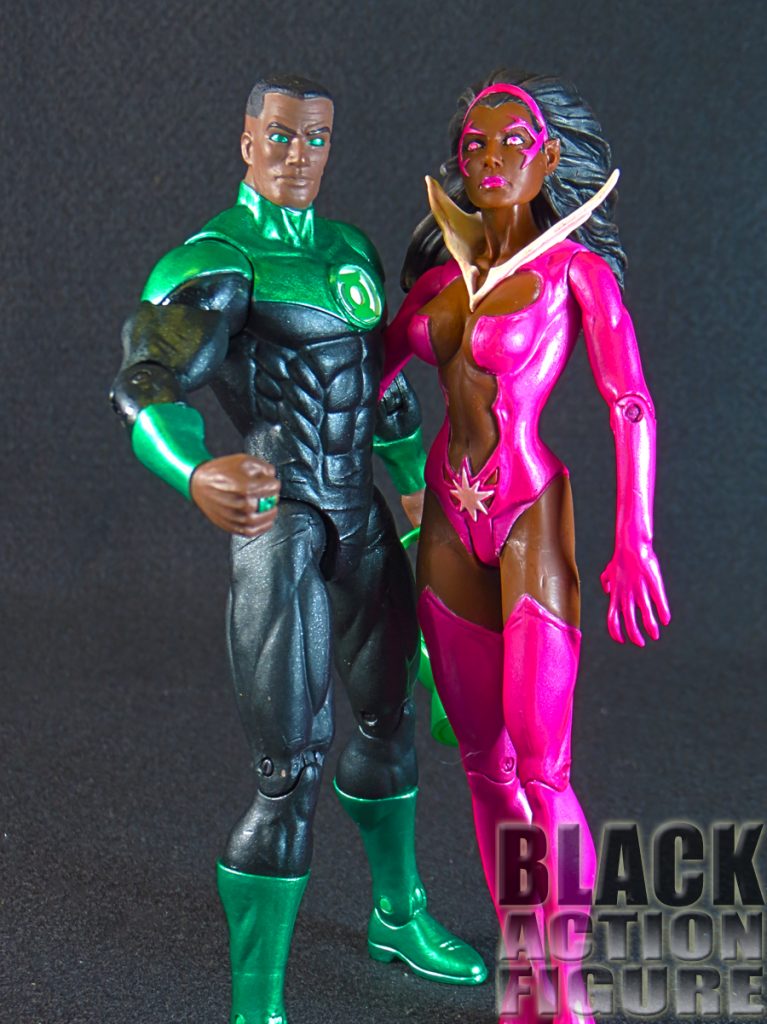 I’m glad I got this figure and got a chance to open it. It is definitely different than the Blackest Night one and definitely stands out in a crowd.

I was also able to get my hands on a Fatality figure (his previous arch-enemy turned current love interest). Together they are my Barack and Michelle for my Green Lanterns.

With this now open, I’m curious and excited to be able to move on the DC Icons version of John Stewart. Based on him from his “Mosaic” time period, I still believe it to be a really good figure which should mix better in the 6″ realm as well.

Which John Stewart Green Lantern do you like the most? This may very well be favorite (next to the DC Universe classic version, which did actually come with accessories). Sound off in the comments below…