As collectors, you may often wonder like I do, what’s next? There are so many collectible things featuring our favorite characters, but we don’t want to (or need to) buy it all…maybe even just a select few pieces to show your love for collecting.

As some of you may have noticed, I have begun to pick up statues and model kits of some of my favorite characters. They look great on a shelf and are great conversationalist pieces (I can’t begin to tell you how many people asked about my Kotobukiya Black Panther statue sitting in my Man-Cave at my last getogether).

If you haven’t realized, War Machine is one of my favorites, so when I saw this Dragon Model Kit statue, I knew I had to have it. Plus the fact that it’s already painted, so all I would have to do is put it together and begin enjoying it right? Just like a Kotobukiya ArtFX+ statue.

When I got the box, I was impressed by the look and the weight. The box itself was huge, and the design was almost reminiscent of a Hot Toys box. 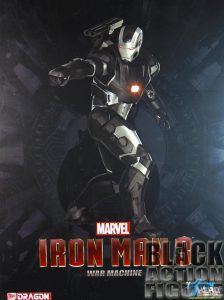 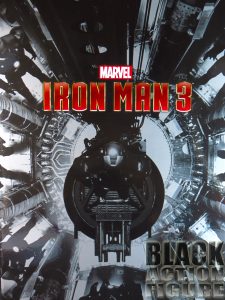 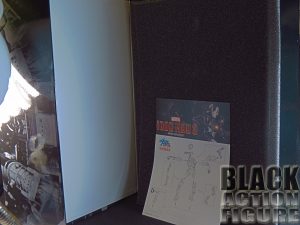 The slipcover on the box featured a shot of the figure inside. When I looked at it, I was like, “oh damn, the eyes and the chest glow like this?” Let me just tell you now that Photoshop is a wonderful program.

Slipping off the slipcover, we get the front of the box portraying a shot of the house party Iron Man armors in a circle. Which is a little weird because outside of the fact that War Machine didn’t stay in Tony Stark’s vault, this armor never showed up in Iron Man 3…it was cut to show off more footage of the Iron Patriot armor (which is just this armor with American flag colors painted on).

As soon as I opened the box, the instructions slipped out. Everything already looked pretty self explanatory, but I guess a set of instructions never hurt anything, right? 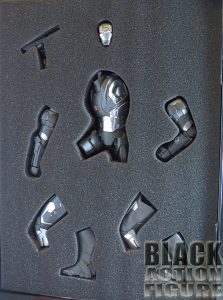 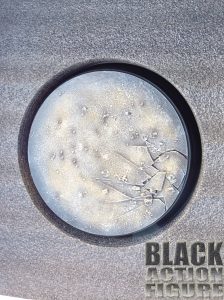 There are three levels of foam on the inside. The first thin top layer easily comes right off. On the second level, we get the War Machine armor. So far so good. And on the third layer, we have the base that the armor stands on.

I first had some slight buyer’s remorse when I took out the War Machine pieces and instead of solid, heavy pieces, I pull out hollow pieces of plastic. I was kind of disappointed that all of this packaging was all for several pieces of plastic. I’m thankful for the protection, but I still feel somewhat deceived.

The base was a little more solid, but still felt more hollow than it should be. It was definitely a change from the Kotobukiya Black Panther that I reviewed here.  That was a solid figure. This one, not so much.

I went ahead and pieced together the statue…err…pre-painted model kit and the final product does end up looking nice, but it is still missing the feel of a nicer statue.

I appreciate that everyone would like to cash in on the Marvel Cinematic Universe, but before I make another purchase like this again, I will definitely do a little more research. Unless the Dragon company changes their materials, I will most likely stay away from them in the future…unless I get a good price on something.

Let me know what you think about this War Machine model kit and if it lives up to it’s intended purpose. The shot below is where I’m keeping the statue for now in my man cave, opposite of my much more cherished Black Panther figure.  I know they are not the same scale, but still look nice together sitting on my mantle. How do you feel about statues, kits and collectibles in general? Sound off below… 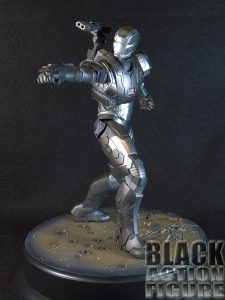 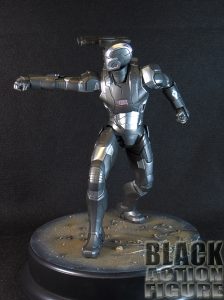 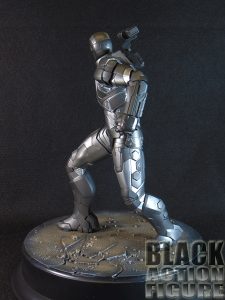 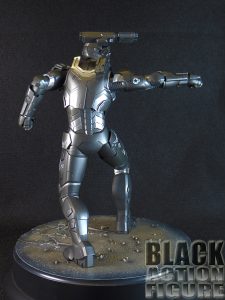 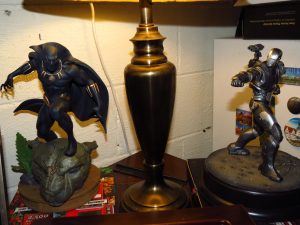