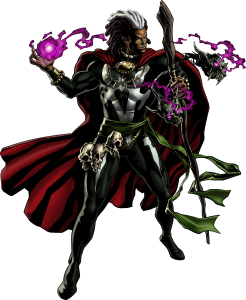 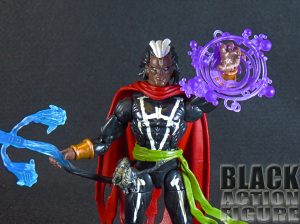 Okay, be straight up with me…did you ever think you would see a Brother Voodoo Marvel Legends action figure (or any type of figure for him…ever?)?!

When I saw this figure for the first time, I couldn’t help but do a double-take (aka “lost my shit”)…this character was actually on my list of must-haves and I get to cross him off! Mind-freakin’-blown. He’s probably one of my obscure favorites next to Luke Cage, Blade, Blue Marvel, Spectrum, and Misty Knight…I know a Blade is eventually coming and I expect Spectrum will be around sometime down the line, but if they ever put out a Blue Marvel anytime soon, Hasbro can just drop the mic and walk off stage.

I will admit, Brother Voodoo is not a popular Marvel character and the figure may eventually end up being a peg warmer (after the collectors are done buying him), but grab him if you can, because A) we have to support more diverse Marvel characters and B) this figure is freakin’ cool a.f.  So check out the review and see if you agree with me…

NOTE: Thank you Andrew Hill for reminding me that this is a repaint of the original Brother Voodoo that came out of the Doctor Strange Marvel Legends Boxset at the 2015 San Diego Comic Con…I wasn’t lucky to get it, but for those who did, this may be a retread of some familiar stuff, although definitely worth a buy. 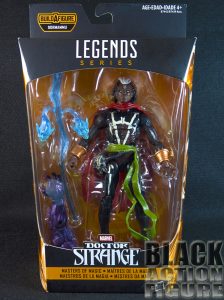 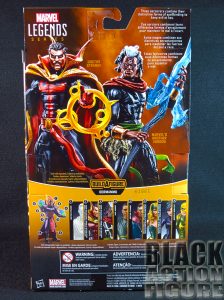 Standard Marvel Legends packaging this time with a golden highlight on a black background to give it a more mystical type look. It’s close to the recent X-Men wave packaging which is more yellow than gold, with both standing out in a sea of black and blue or black and red packaging.

As always, Hasbro’s presentation of the figure on each side of the packaging is superb and makes it enticing to just want to pick it up. I already own this figure and still picked it up again when I saw it in the store today. That shows they are doing something right. 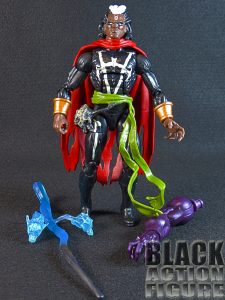 Accessories are sometimes hard when it comes to superheros.  It’s sometimes difficult to portray their power in a certain way that would make it both accurate and significant.

Most of the magic users lately (Doctor Strange, Nico, Scarlet Witch, etc.) have come with magic effects to help demonstrate their powers. Brother Voodoo comes with his signature staff made partially translucent to illustrate his powers. While the staff is a partially accurate version of the staff he carries in the comic book, I was slightly bothered that the disembodied demon heads attached to the staff are only looking down. There is no way to reposition them (and stay repositioned) without some effort. If Hasbro just included a little wire in the attached demon heads, posing this figure could have been more fun…and more comic accurate. Unfortunately we can’t have everything.

Good staff, but limited in poseability and I wish the “magic” figure came with some magic effects to show off its abilities. 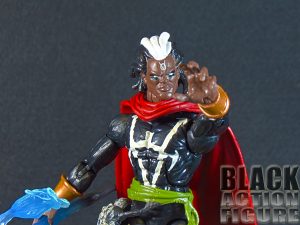 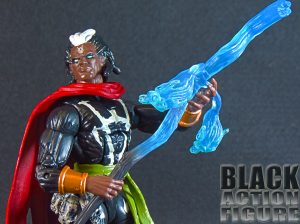 This figure is perfect and looks like he jumped off the pages of the New Avengers (or Mighty Avengers and wherever else he’s shown up).

The dual-colored dreadlocks are great. I love the fact that they made the figure with pupil-less eyes, which saves all of us from ending up with a cock-eyed figure. I like the detail of the black eye-shadow around his eyes. And the tattoo on his forehead. 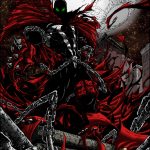 With all that said, I took a step back and looked at this figure. And I’ll be damned…his outfit favors another well-known black superhero…Spawn. The black outfit with the red, tattered cape. Even the markings on the front of the outfit favor Spawn’s. I’m not sure what happened there, since I know Brother Voodoo has been around since the 70’s. I don’t know…just found it oddly strange that Brother Voodoo’s appearance change would favor Spawn’s so closely. A Freudian-faux pas? One can only think so. 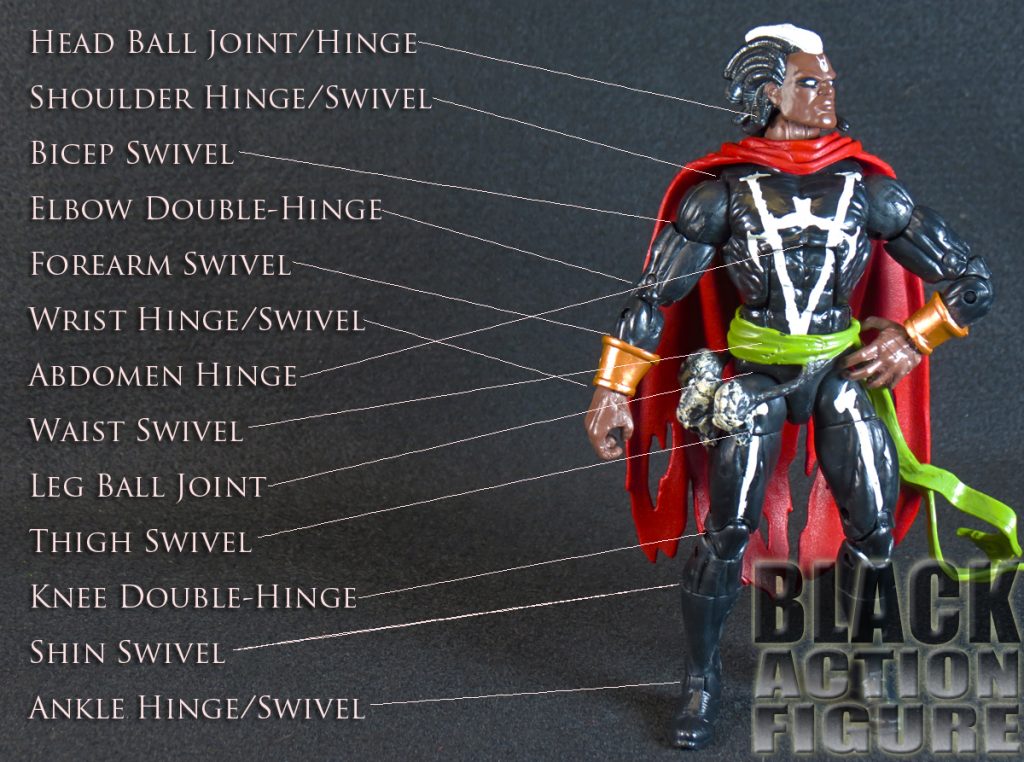 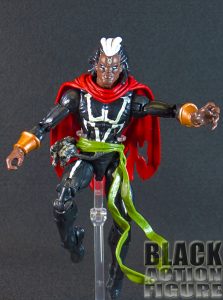 I wish sometimes I was a better poser so that I could take advantage of the different things you can do. I know there are some dynamic poses this figure could be doing, but I either don’t have the ability, the time or the patience to do so. But the proper articulation is there and it all mostly works fine.

I did end up having some trouble with the head. The figure can look down okay, but when I try to have it look up, the head pops off of the ball joint, mainly because of the molded dreadlocks. Which is fine with me. I don’t mind having some slight issues as long as they are fixable and the rest of the figure is pretty much on point.

In any case, great articulation rounds off this very solid figure. 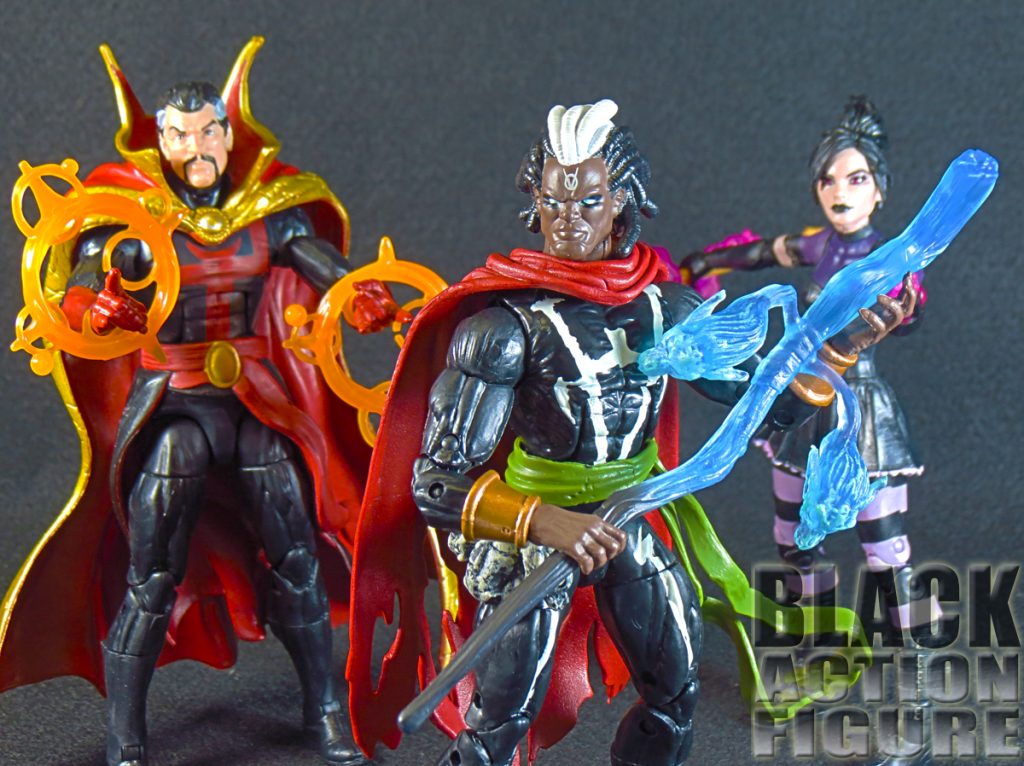 I think I’m still really amazed that this figure is a reality. Along with other figures in this wave I really didn’t expect (Nico Minoru/Sister Grimm). Along with probably the only figure I wanted from this year’s comic con Marvel Legends pack. And an awesome ass Build-a-Figure of a re-decoed figure I missed from last year’s Marvel Legends comic con pack. (I think they still need to re-release both the Hela figure and the Magik figure).

So now I have my Brother Voodoo, Luke Cage, Miles Morales Spider-Man and Misty Knight figures.  All I need are Blade, Blue Marvel, and Spectrum to round off my set of the urban Avengers…or Ultimates…or whatever.  Let’s make it happen Hasbro.

What did you think of this figure? Is he on your “must get” list like he was on mine? Let me know in the comments below….