I’ve been waiting all year for this one, ever since Luke Cage showed up in Jessica Jones last year. I binged watched this in two days the weekend it came out, and I enjoyed it. Was it perfect? No, but it is very rare any show, let alone a superhero show is…but it has so many pluses to it.

Let me get the controversy out of the way. I have read too many times that this show was “too Black” and it is often by a writer who never knew the origins of the Luke Cage/Powerman comic book.  Luke Cage was created back int he 1970s during the “Blaxploitation” era of film and tv. The writers brought a jive-talking Black superhero to cash in on the fame of movie heroes like Shaft and Superfly. His trademarked saying “Sweet Christmas” was a product of this time. Later after that era had passed, they teamed Powerman (as he was called at the time) with martial artist Iron Fist.

I write all that to say that his roots were in Harlem in the comic book over forty years ago. Harlem was mostly Black then, and it still is now. To complain that a show is “too Black” is idiotic. There is no end to shows we can deem as “too White”, but we have come to accept that as the norm so much that when a show features a mostly Black cast, people are offended. Get over yourself.

With all that said, let me get into some of the positives of the show. Netflix has done the character right. First off, they smartly cast Mike Colter as Luke Cage…mostly known for his many appearances in “The Good Wife.”  His powers are on point. He won’t be able to take on the Hulk, but he can hold his own. Impenetrable skin is there. Even his origin story is a close adaptation from the comic book.  Where they deviated was Cage’s “Hero for Hire” days in the comic book. They bring it up a couple of times and even make light of it, but he more or less accepted some form of compensation for his services. In this show, Cage refusing to take any money makes him a little more altruistic in character. 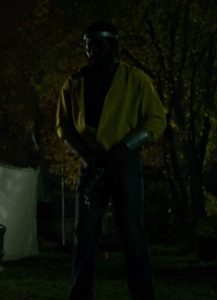 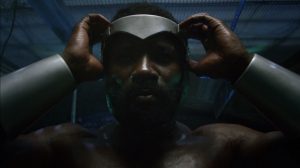 I love all of the sly references (or easter eggs) that refer back either to the original comic book or the Marvel Cinematic Universe. We get to see the famed open yellow shirt (or “blouse”) with the metal tiara and wrist bands that he made famous back in the 70s. Although today, he rightfully claimed that he “looks like a damned fool.”

The supporting characters were an added plus as well. Simone Missick as Misty Knight definitely was a great addition to this show…although she won’t have her own show anytime soon, rumor is that she will be showing up in Marvel’s Defenders along with Luke Cage, Daredevil, Iron Fist, and Jessica Jones. Mahershala Ali is cast as Cornell “Cottonmouth” Stokes. While he’s been acting for a while, I first noticed him in “The 4400” back in 2004 and knew he was a great addition to the cast.

SIDENOTE: There is some confusion as to which “Cottonmouth” Ali portrays from the comic books. There are essentially 2 “Cottonmouths” in the Marvel comics. The original one was a kingpin crime boss pimp known as Cornell Cottonmouth that gave Luke Cage hell. The other Cottonmouth belongs to the Serpent Society and they are often attached to Captain America villains. Being they are both Black, I can why there was confusion. I can’t find the reference, but Cage even mentions it in the comic book. When told that Cottonmouth was coming after him, he asks “Which one?” recognizing that he has crossed paths with both.

Rosario Dawson has a pretty prominent part in this series, reprising her role as “The Night Nurse”, and actually juggles around the idea of providing healthcare services to the superhero set since that’s all she appears to be doing lately (Daredevil, Jessica Jones, Luke Cage). Rounding off the cast we have Alfre Woodard who plays a corrupt Harlem politician and cousin to Cottonmouth, and the guy from “Sons of Anarchy,” Theo Rossi, playing manipulative thug Shades.

The tone was right. The setting was right. We have a good cast of characters and great actors playing them, so what are some of my gripes?

At times, the show felt a little like “New York Undercover” with the musical acts coming in the middle of the drama (funny story, but a younger cat who had no idea what show I was talking about said that the show felt like “Empire” to him with the musical acts). Raphael Saadiq (please get back together Tony, Toni, Tone) is here, the beautiful Faith Evans (with her husband’s picture hanging on Cottonmouth’s wall in his office), and the Delfonics are some of the musical acts featured on the show. At times, I was grooving to the music. At other times, I felt the music was an unnecessary distraction and a little out of place. The one exception to that statement was an original piece done by Method Man after Cage saves his life during a store robbery. I may have to make that joint my new ringtone.

The old school hip hop was pretty prevalent during the show, and even caught me off guard with how it was written into the script. I almost didn’t notice until I heard someone offer Misty Knight a lemonade and tell her “Lemonade was a popular drink” and Misty chimes in “and it still is.”  The title of that episode? DWYCK, the song from Gang Starr and Nice & Smooth which the lemonade line originated from (one of my favorite joints from back in the day…damn I’m old).

The pacing was slow sometimes. I felt there was a lot of unnecessary filler conversations that felt like it was placed in there to get us a full 13 episodes. I wish there was more action in it during these times.

There was even some political commentary fit into the storyline, although I’m confused on what stance the show was trying to take on the police issue. There are good cops and bad cops, but sometimes good cops temporarily turn bad and sometimes the bad cops are doing something for a good reason and damn I’m confused.  Are we for the cops or against the cops or both? 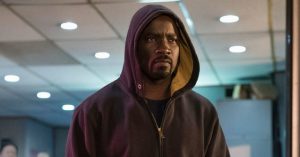 The “hero-in-a-hoodie” was a not-so-subtle nod to Trayvon Martin. I love the fact that towards the end the cops were confused who was actually Luke Cage when patrolling the streets when everyone starts wearing a bullet-ridden hoodie. Some of us have been there. I’ve been in Information Technology most of my life and have worked for some of the biggest companies in the world, but as soon as I put on a hoodie, I’m nothing but a common street thug.

Another note, in the flashback sequences, I just want to say that I know that Netflix has some money, so I wish Cage’s overgrown hair didn’t look like someone pasted their shaved pubes on his head. I’ve seen better wigs on Trump. I mean, it was really awful.

Overall, I loved the experience. I can’t wait for more. There was little-to-no reaction when Misty Knight insinuated that she slept with Cage while talking with his budding love interest, Claire. I wonder what the interaction will be like when Cage hooks up with the rest of the Defenders (including Jessica Jones) in the Netflix show. Keep in mind, in the comic book, Cage and Jessica Jones are married and have a little girl.