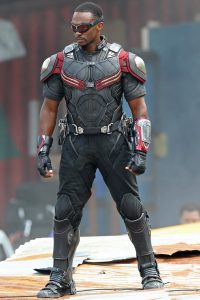 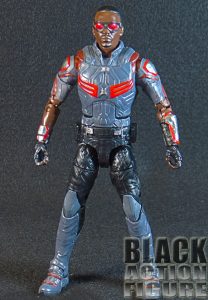 It only took over two years and four films (Captain America: The Winter Soldier, Avengers: The Age of Ultron, Antman, and Captain America: Civil War) before Hasbro has finally given us a Marvel Legends 6″ figure to add to our growing collection.

I’ve seen Falcon’s popularity grow since his debut in Captain America: The Winter Soldier. I was in retail stores around this time and have seen at least three separate cases of where kids were specifically looking for a Falcon action figure. In one of those cases, the mom even asked me if I knew if one even existed. Sadly at the time I had to tell her that Hasbro has opted not to make an action figure of a major character from one of that year’s biggest movies. Yes, I did throw a lot of shade Hasbro’s way.

Fast forward to today and we finally get a 3.75″ Falcon figure AND a 6″ Falcon figure…but OOPS, both are coming 4 months AFTER the release of the movie itself (although in all fairness 2-3 weeks before the DVD release). AND on top of that, the Marvel Legends 6″ Falcon is a Wal-Mart Exclusive…making it a field day for scalpers and re-sellers across the internet…so with all of this drama tied to it, does this figure make the cut? Check out the review… 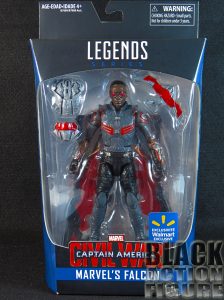 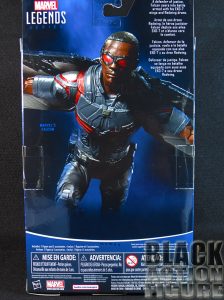 Marvel Legends packaging has always been a high scorer, and this is no different. I may be biased towards the Marvel Legends line, but I admit feeling pretty good walking down a store aisle and seeing a generous portion of Marvel Legends figures hanging on the pegs…how it should be. Not the sparse, desolate landscape we have seen especially in the Star Wars section. Both Wal-Mart and my Toys R Us have done a really good job in the last few weeks of having figures in stock.

On this packaging, I love the mixtures of black and bright blue…definitely making the figure stand out. A few percentage points lost for the “Wal-Mart Exclusive” sticker all on the front. I really don’t like exclusives…it makes this hobby tedious and then having to turn around and depend on eBay for those hard to find items, just upsets me more.

Anyway, packaging is good, great window on front, and great representation of the figure on the back. 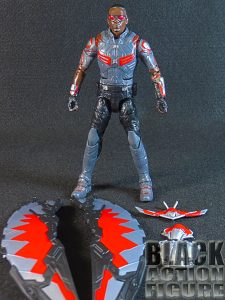 This is where the figure begins to falter to me. We get of course get the removable wings, along with the backpack and the Redwing accessory in both full form and retracted versions. 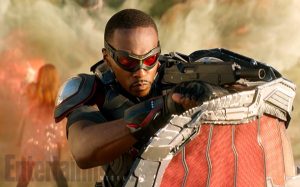 A couple of things wrong with this.  First, we are of course missing the weapons…Hasbro refuses to include a damn weapon with this figure. A quick Google search of course shows that Falcon does indeed use weapons in the Civil War movie. Why are we not getting weapons with this figure? And here is Hasbro rubbing salt in our wounds…the figure itself features hands that are set in the “gun-holding” pose…with no weapons to put in them, why would Hasbro even include them?!

The next issue is the case of the missing additional head…not really a requirement, but since the 3.75″ figure included an additional head, I almost thought it would be a no-brainer for Hasbro to throw in an extra “unmasked” head in this package. But nope…we must have reached our plastic allowance for this figure. 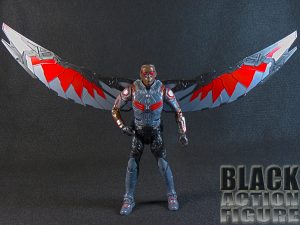 My third issue is the Redwing accessory…I just happen to have the accessories for the 3.75″ figure out when I was doing this photo shoot and happen to look at the Redwing accessory with that figure…and found out that it is essentially the same exact accessory with different paint applications. The same size and everything. So you’re telling me that Hasbro couldn’t even scale up the Redwing accessory for this figure?  It doesn’t matter anyway…unlike the 3.75″ figure, there is literally no where to place this accessory…no stand, no clips, nothing. I’m sure for those who display their action figures they’ll figure out a way for Redwing to maybe hang next to Falcon…some fishing string or something. Very disappointing.

Not really an issue, but a warning: make sure you put the wings on the right way. For the first part of my photo shoot, I had placed the wings on the outside of the backpack, making them curve outwards, which I thought was funny.  Re-examining the setup, I figured out that the wings clip in the peg holes on the inside of the backpack, making the wings curve inwards, which is what makes the most sense to me. Just wish there was a quick instructional paper inside the package to explain this, but I quickly realized my mistake. 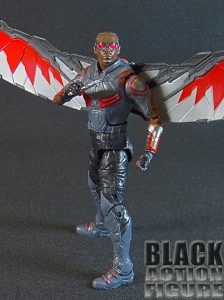 I’m a little mixed on this category too. After reviewing the 3.75″ Falcon, and basically enjoying the level of detail in sculpt and paint application, I expected this 6″ figure to knock me out of my seat…but instead feel like it’s just a big “meh”.

The sculpt is essentially the same, just some changes to account for additional articulation and other things. Yes, it still resembles Anthony Mackie, but in this 6″ scale, I almost have to squint a little bit to see the resemblance. What was fine for the smaller figure begins to distort a little in this one. 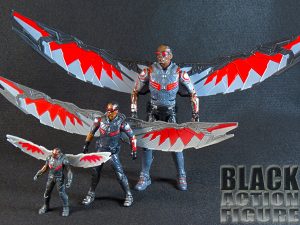 As far as the paint application, the wings are excellent. But the figure itself is kind of questionable. I guess I expected more painted details on the outfit, or at least some shadowing effects in some of the monotone areas. Instead, we get a figure that is either painted or cast in a different plastic than the 3.75″ figure. A quick comparison seen to the right shows the differences in the two figures (I threw the 2.5″ figure in there because it was next to me…not to really compare the paint application).

Because of this, I question the likeness of the figure to the source material. Things look very out of proportion and not correctly colored. It’s because of this, I am very much looking forward to the Hot Toys figure and hope that maybe Bandai gets around to including this figure in its SHFiguarts line as well so we can get an accurate 6-incher. 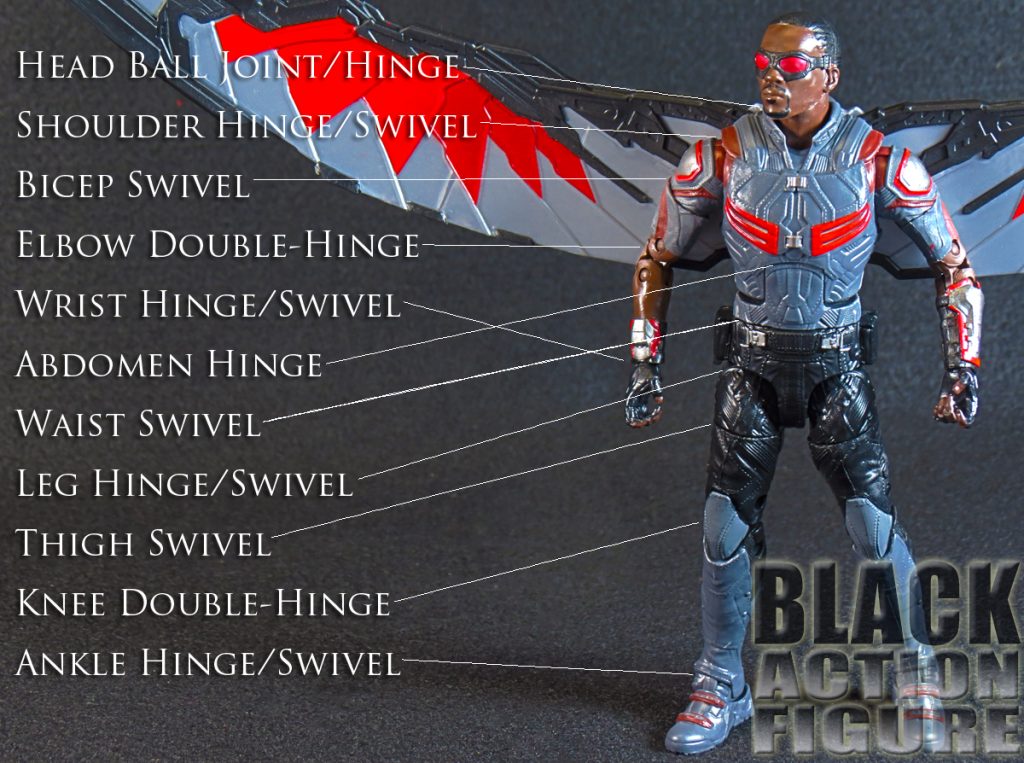 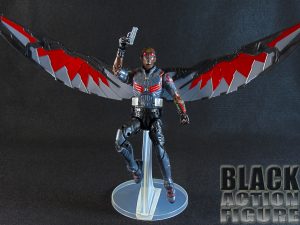 This figure features over 30 points of articulation, but even with so much available articulation it still has it’s issues.

For one, again unlike the 3.75″ figure, the wings are static. No moving these wings up and down unless you take the wings out of one of it’s pegs. But then it becomes a little unwieldy.

Next, the neck, although on a hinge, does not let the head go all the way back (like the figure is looking up) due to the shape of the figure’s head. If you try, the figure’s head will most likely pop off of it’s ball joint, which does not hurt the figure, but it is not suggested you try either.

We do get the double-jointed elbow, the wrist articulation, and the abdomen hinge that we didn’t get with the 3.75″ figure (but normally get with any Marvel Legends figure) so no complaints there.

All in all, a decently articulated figure, even if there are some hindrances that stop the full range of motion on some of the hinges and swivels. 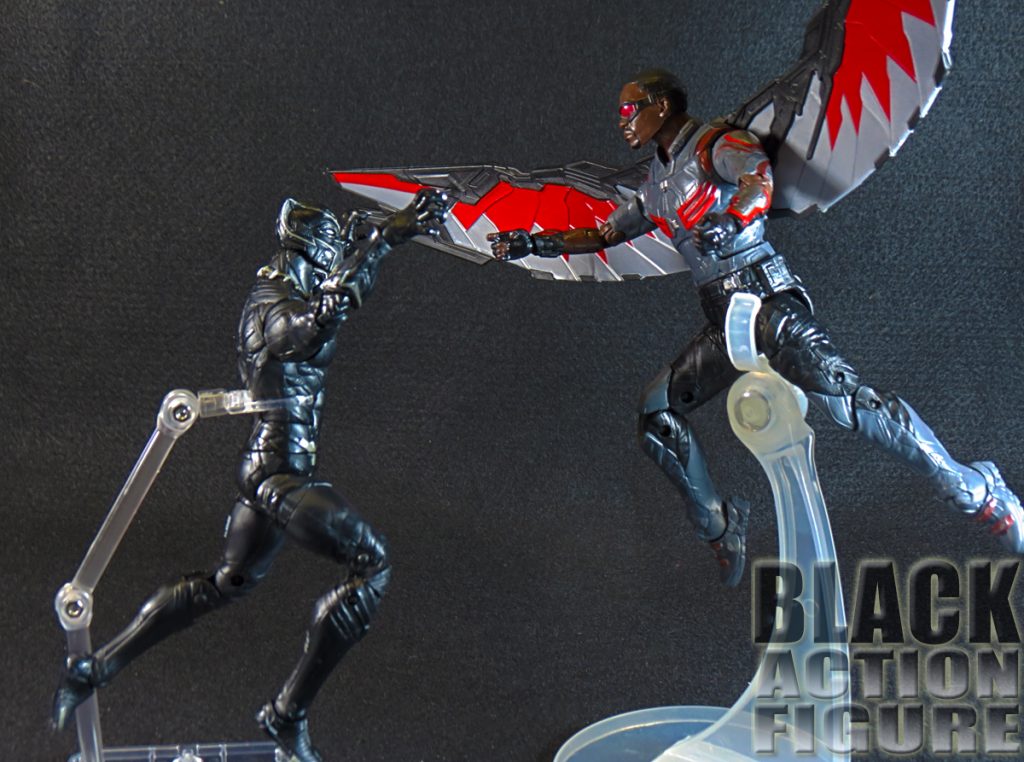 I have to be honest…I really thought I would love this figure more than the 3.75″ version, but it kept becoming apparent that it was going to seriously fall short of my expectations. It’ll look good with the rest of the team, but I really wanted it to be my standout figure on Team Cap, and to me, it just didn’t do that for me.

I’m glad that Hasbro got off of their collective asses and decided to put out a figure. It was an insult that this figure didn’t come out two years ago. To be fair, we still don’t have a movie Vision figure, but I don’t think the demand or want of that character was as high as it was for this one.

I’m looking forward to the release of the Hot Toys figure. I think there are enough differences in outfits to justify this purchase and would love to see a movie accurate version of the character.

Did you get this figure? Let me know what you thought about it in the comments below…