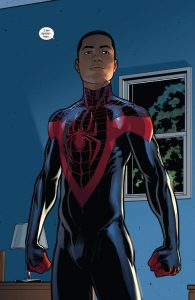 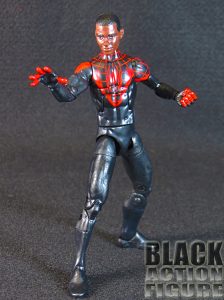 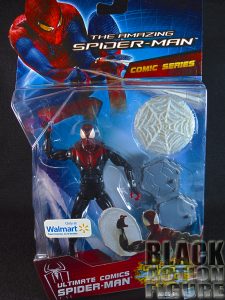 Hasbro really knows how to work the emotional spectrum. You see, four years ago back in 2012 after Sony rebooted the Spider-Man movie franchise into “The Amazing Spider-Man,” Hasbro made a set of 6″ figures (officially unofficial Marvel Legends) exclusively for Walmart made up of both movie figures and comic book figures.  One of these comic series figures turned out to be Miles Morales himself, the new Ultimate Spider-Man.

Now I was both excited and sad at the same time. Excited that we get our first Miles Morales Spider-Man.  And sad at just about everything else. The sculpt wasn’t that great. The accessories didn’t make sense for this character. And they made a 14-year old boy into an adult male action figure. Then you turn around the card only to see that they mentioned Peter Parker’s name, but they didn’t even have time to bother with Miles Morales. It seemed everything about this figure is wrong. You can see my excitement for it because I’ve had this figure for almost 5 years and I haven’t even seen fit to review it on B.A.F.

Zoom to today, and we now have Hasbro putting Marvel Legends figures out like their name was Toy Biz. We’ve had so many waves in the last couple of years that I literally cannot keep up and pretty much gave up on trying to collect the smaller 3.75″ line. And then Hasbro goes and makes me really happy…they make a Miles Morales Spider-Man figure that literally blows away whatever they did before and corrects most of the mistakes of the first one. Get ready yall, because I think this is going to be a positive review. Let’s take a closer look… 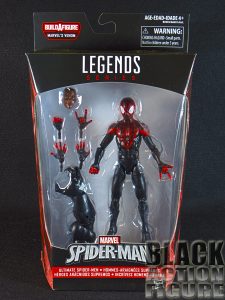 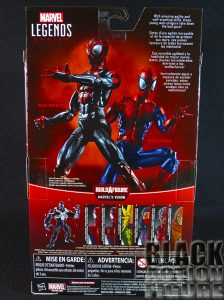 Just looking at the packaging from four years ago (see above) and what it is today reminds me of how far Hasbro has come in terms of package design, especially with the collector in mind.

Gone is the mindset that you have to toss the packaging after you rip it open. You can remove and replace the figure nowadays at your leisure.

The red and black color scheme is also a plus. It nicely frames the front of the figure, while also accentuates the posed figures on the back of the package.

On the back of the packaging we also get what was missing from the last figure…a name! Along with Peter Parker, we get Miles Morales properly identified. We also see the figures in the rest of the wave along with the Build-A-Figure bonus for owning all six figures.

Yes, we’ve seen it before and yes, we’ve reviewed it before, but sometimes it still manages to impress me. 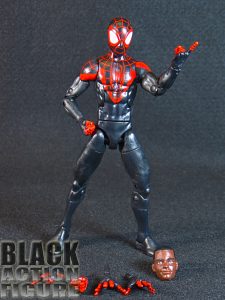 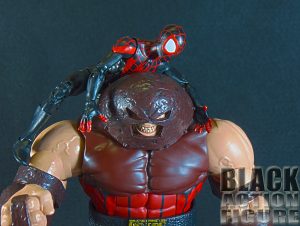 What I like about Hasbro nowadays is that they are putting in better accessories for their figures. The original Miles Morales Spider-Man figure came with a Spiderweb Shield and a figure stand. First, when in the short time for this series have we ever seen Miles web up a spiderweb shield? And really, how lame is that?

This figure comes with two extra pairs of hands in various poses, and a separate unmasked Miles Morales head. Seriously, how effing cool is that? Just the fact that we can have the figure posed without his mask is pretty damn great and I’m glad they are including this more and more with action figures with secret (or sometimes not-so-secret) identities like Spider-Man, Daredevil, Black Panther, etc.

The hands included are pretty good as well. We get a closed fist pair, a “THWIP” web-shooting pair, and an outstretched set of hands to make it look like he’s either climbing, or even delivering his patented Spider-sting…it works great either way.

All-in-all, even without “spider” accessories, I’m pretty pleased with what we’re getting, especially the separate head. I think the only thing that would have made this better is if we got some genuine (to Miles) spider webbing and effects. 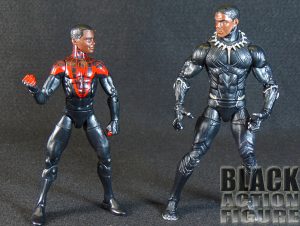 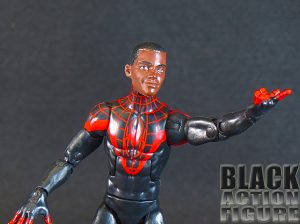 There are so many good things and maybe one or two nitpicky things I have with the sculpt and likeness.

First up the height. Finally, Hasbro gets that 14 year old boys shouldn’t be the same size as full grown men…and to that end, we get an action figure that is properly scaled to be shorter than the 6″ scale. They have already done this with Wolverine and various female characters (Kitty Pryde comes to mind). In the picture to left, it is pretty apparent that the Miles figure is significantly shorter than the Black Panther figure.

As far as Miles himself, the Miles head sculpt is a close representation of the comic book version of him. The only negative to the head is the goofy look on his face. The eyes were painted too glassy, almost as if his parents were a little too liberal with the Ritalin.

The paint application on the figure is accurate and just like in the comic book, I like the contrast of the red to the black.

Like I mentioned in the accessories, each set of interchangeable hands are sculpted perfectly for this figure. They definitely add to the overall effect of the figure. 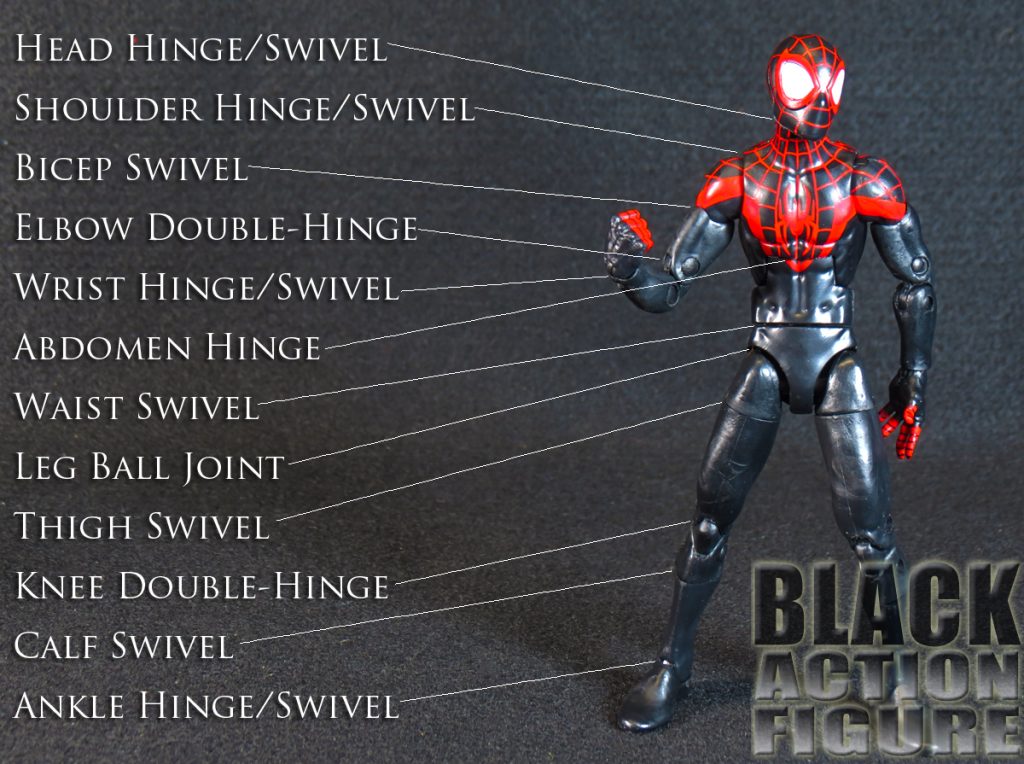 This figure has 32+ points of articulation, as a Spider-Man figure should have since being Spider-Man is almost synonymous with being super agile. 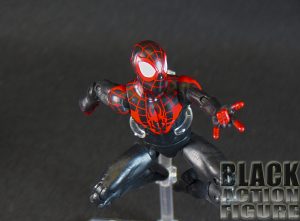 Several included points of articulation make this figure great to pose. For one are the rocker ankles allowing the figure to pose with the foot and leg almost at a 90 degree angle. Also included is the hinge in the neck/head which allows the figure to look all the way up. The wrist hinge is a great little feature that I wish more figures had. And finally, the abdomen hinge went almost completely unnoticed by me until I looked closer at the figure. I don’t know if this is testament to a great sculpt to have this incorporated so well or it can be attributed to my oversight. For any reason, it is a wonderful addition.

The only complaint I have is the exposed joints when you move the legs around…I can actually almost see the ball joint attachment. I think with a slight bit more tweaking, this would have been one of the baddest figures coming out of the Hasbro camp. 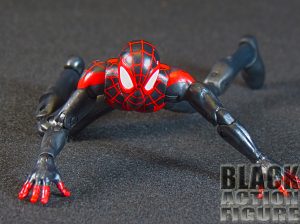 This figure to me is the quintessential Miles Morales Spider-Man figure to have. With the addition of Miles to the current universe, I don’t think he’ll be going away anytime soon…so thank you Hasbro and Marvel for giving us one of your best figures to date this year. Now all we need now is Robbie Reyes Ghost Rider, Amadeus Cho Hulk, and the Laura Kinney/X-23 Wolverine and I’ll have my new Fantastic Four!