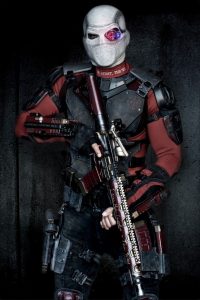 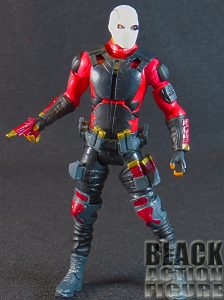 Well check this out! A figure review of a movie character BEFORE the movie has come out! The planets must be aligning somewhere for me to be able to do this. I actually was able to pick up this figure almost two weeks ago now and completed my photo shoot about a week ago…and yet somehow it has taken me this long to post a review on it. I think the real reason is because I didn’t want to do this review before I did my Ghostbuster’s one…

At any rate, here is my first review of a Deadshot action figure…but definitely will not be my last. Between the Medicom MAFEX Deadshot, the Bandai SHFiguarts Deadshot, and the Hot Toys Deadshot, I have about three more reviews coming…who am I kidding, probably five more.

I wasn’t feeling Will Smith as Deadshot at first, but through the onslaught of advertising and the many trailers I have seen, I have grown to like Will Smith as one of my favorite DC villains/anti-hero. Not as crazy as Deadpool, and not as serious as the Punisher, Deadshot almost fits in between…and Will Smith has so far brought a good translation of that to the film. But now, has Mattel done this action figure of him any justice? Read on to see… 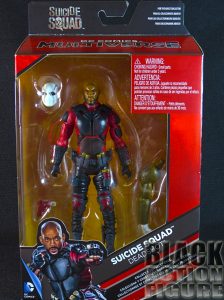 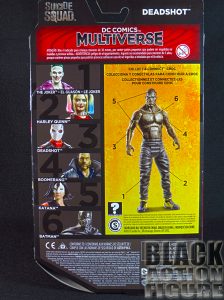 The packaging is nothing new. Unlike Hasbro who uses different colors on the same basic packaging to distinguish between their different waves, Mattel almost lazily does the opposite. Their packaging is the same red and black color down the line…whether it’s for Batman v. Superman, or Suicide Squad, or the Flash TV Series, you will get the same basic black and red packaging. Consistent, but boring.

With that in mind, taking a look at the front, we get to see a look of Will Smith as Deadshot on the bottom left, with the action figure prominently displayed in the plastic window. I’m not going to lie…seeing this shot made me really excited for the figure…only to be thoroughly let down (more on that later).

On the back, we see more figures in this wave along with the Collect & Connect figure, Killer Croc. Since we’re on the C&C figure, let me talk about it for a minute. The back features 6 figures which contain pieces for the C&C figure, but many mistakes have been made: 1) Unlike what Hasbro has been doing with Marvel Legends, not all of the Mattel figures are available, so it is wholly possible that we won’t be able to complete the figure. Next, depending on which other Suicide Squad figure you pick up, you see a special version of Croc with a jacket on. Here’s where it gets confusing…it seems that in order to get Croc with a jacket, you have to collect a whole other set of figures…again, not all of them are available yet.

So what we get is a convoluted mess when it comes to wanting to try and collect figures to put Killer Croc together. Honestly, it’s not even worth the confusion and money, so either wait when these fall into the bargain bin months from now, or look into getting another “action figure” of the Croc from another company (which is probably what I’m going to do).

Anyway, this packaging is the same basic stuff, but I feel like I’ll ignore whatever crap is going on for the C&C figure on the back. 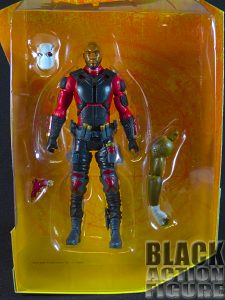 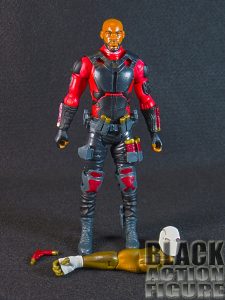 This figure comes with the masked head, the Collect & Connect piece for Croc, and…one effin’ gun! Are you effin’ kidding me? What adds insult to injury is that it’s not even his main sniper rifle gun. It is a crappy red gun. Made out of that shitty rubber Mattel and Hasbro use so that kids won’t poke their eye out or whatever the hell that shits about…

So you’re telling me that we have weapon’s master and master sniper Deadshot and in all of those Mattel meetings going on, you only saw fit to give this figure one stinking handgun?! GTFOH!!!!

I was trying to tell myself that Mattel was taking the responsible route and not trying to promote the growing fear of gun violence among our youth. But that all got thrown out the freakin’ window when I went back to the store one day and saw the damn Rick Flag action figure. This figure comes with not one, not two but THREE freakin’ weapons including a pistol, a rifle, and a grenade launcher! WTF?!? So you’re telling me that you can include all of these weapons with Rick Flag’s figure, but not with the weapon expert Deadshot?! Keep the damn Collect & Connect piece and put in some more damn weapons.

Let me calm down. That’s okay though Mattel. My MAFEX Deadshot will more than make up for your egregious lack of accessories. 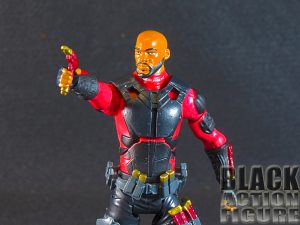 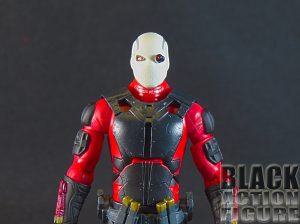 The costume on the figure is admittedly a pretty good match to the character itself, but one thing continues to bother me. Mattel put all of these “accessories” on the costume including extra guns, knives, magazines, etc…all of which cannot be removed. What a lame-ass idea.

The masked head is actually a decent representation of the character, and probably with it on is the saving grace for this figure. The unmasked head suffers from the ultra-glossy/shiny paint job which makes the figure look like a wax doll than a representation of an actual human being. Where is Mattel getting these shitty paint jobs from?

The one gun does look like what we will see in the movie, but is ultimately still a failure. I really wish we had the rifle to this figure… 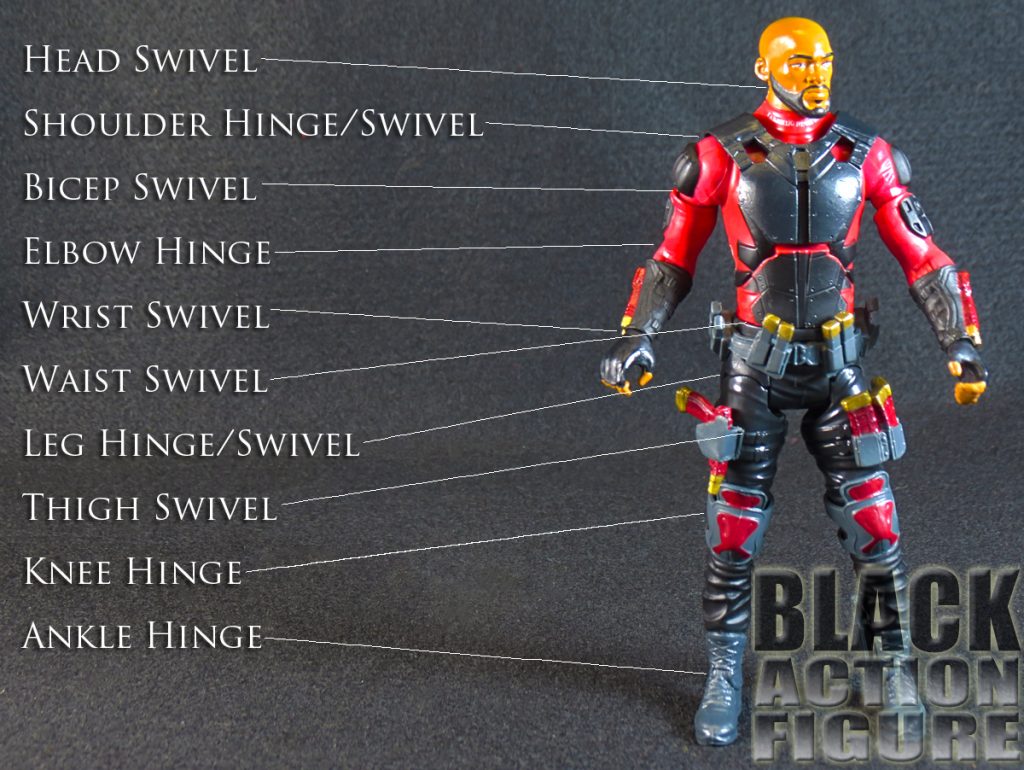 This figure has an okay 22 points of articulation. Really nothing to write home about for a 6″ figure. I know Mattel has done better in the past with their figures including an ab crunch.  But they have been really falling off on this category lately.

Why can’t Mattel take notes from Hasbro? Why can the Marvel Legends figures now look up and down, but Mattel’s figures can’t? Are these universal mysteries that will never be answered? Nothing more to say here… 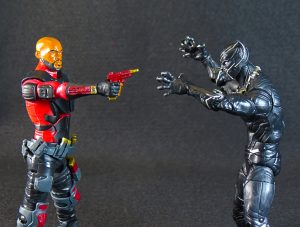 This figure was so disappointing in so many different ways. I really like the character and I really wanted to like this figure. But Mattel made this figure so below average that I would be ashamed to show my face in public if it was my division of Mattel that’s putting out this crap. 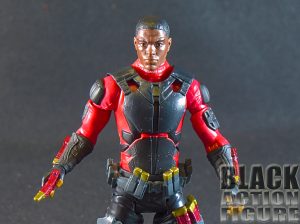 The Hasbro Marvel Legends movie version of Black Panther was so, so, so, so, much better than this apparent dud. Just for shits and giggles and since it was close to me, I put the T’Challa head on the Deadshot figure to see how it would turn out. And to my pleasant surprise, it doesn’t look half bad.

How can we get Mattel to stop putting these crappy figures on the market? Do we strictly stick to the Japanese figures coming later? I’m open to suggestions…sound off in the comments section below.