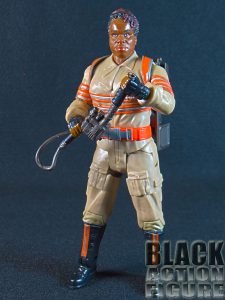 Leslie Jones is a funny bitch. When I first heard that they were rebooting Ghostbusters with an all-female crew helmed by Melissa McCarthy, I was like “meh.” But when I heard that Leslie Jones was going to be the obligatory (see: token) Black person in the crew, I was all like “hell yeah, I’ll go see that just to see Leslie!” Now the trailers have all been kind of okey-doke, but people who have already seen it said that they laughed and came out okay with seeing it, so right now I’m leaning more towards checking it out.

Knowing that the Ghostbusters was revamping the franchise, I didn’t think that this would include action figures, but I walked into Walmart one day and right there in front of me was the first Leslie Jones as Patty Tolan action figure. Now I kind of doubt that a Hot Toys figure will come out for this movie, so this may only be a one-shot, so I thought “why the hell not?” So check out the review and see what I thought about this Ghostbusters Patty Tolan figure… 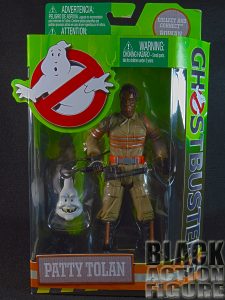 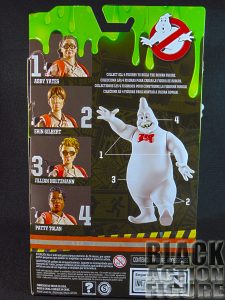 The packaging is more or less standard fare for Mattel figures (which in turn borrows heavily from Hasbro figure packaging). We get a resealable window box that the figure comes out from the side with minimum damage to the package itself…in case you want to hold it in your hand for a few minutes then put it away for the millions of dollars you’ll make from keeping the figure fresh in the package. Or just throw that shit away, like I plan on doing.

On the back we get a close up shot of all four Ghostbusters in all of their looking-nothing-like-the-actors glory…more on that later. We also get a look at the  pieces you can put together to build some other random figure…more on that later too.

A moderate layer of mediocrity with just enough to ship the figure in. 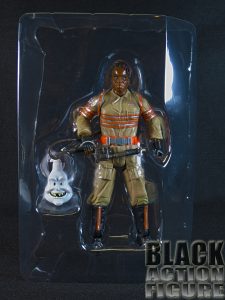 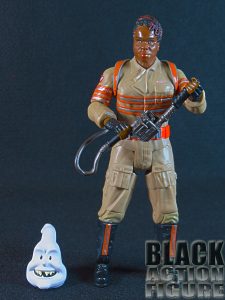 Once we break open the package, we basically see that we get one real accessory with the figure, and that is of course the proton pack. Although I’m sure there is more accessories that Mattel could have included with this figure, they of course go with the bare minimum. The proton pack at least looks nice and does come off of the figure, but the proton gun is made of that rubbery material that when it gets bent, it’ll stay bent unless you lay a book or something on it to flatten out. I hate the rubber material with action figures…if these figures are marketed towards adult collectors, which some of them are sometimes (not necessarily this one) then I expect the accessories should accommodate the adult collector, not the random kid whose mom lets them pick one up. That of course is a general statement. Kids are not playing with action figures anymore anyway, they are out catching Pokemon somewhere outside…

Also included (but not counted as an accessory) is the head of the figure that you need to purchase all four Ghostbusters to get to put together. A definite marketing ploy that has worked well in the past for both Mattel and Hasbro, but in this case definitely does not entice me to pay upwards of around $80 so that I can make this “ghost” figure. I paid the full price for this figure because I wanted to review it on my website, but rest assured, we’ll see the others at Ross, TJ Maxx, or 5 Below before the year is up. I can play the long game…and may even then not want to buy the rest. I really don’t have the room.

Anyway, I feel that for the price, we really aren’t getting what we are paying for. Hasbro has fortunately stepped up their game somewhat including extra hands and heads where appropriate. This is the bare minimum they could have done and they did it. 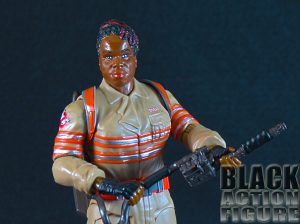 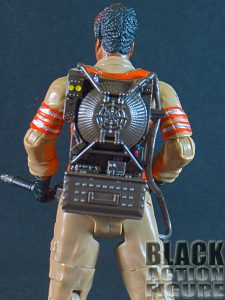 I can tell you right off what’s wrong with this figure…and all of the figures in this series. Have you ever seen Lionel Richie’s “Hello” video? Go ahead and Youtube it, I’ll wait (here’s the link for good measure)…good, now you have a reference to what I’m about to talk about.

This figure looks like the blind lady in that video sculpted it. Yes, you have all of the elements from the hair to the lips, etc., etc., but when you put that all together, this DOES NOT look like Leslie Jones…like a warped, alternate version of her, but not her.

This figure also differs greatly from the prototype figure they showed off at the Toy Fair. That figure had either a matte plastic or matte paint job…this figure has a glossy look to it to make it look like the character is in a constant sweat…or just got done eating a bucket of KFC or something. Definitely a huge difference between the prototype which kind of favors Ms. Jones to the reality which makes it seem like it was a rush job.

A note to Mattel…keep putting shit like this out and I can see more and more licensing going to Hasbro…which in some cases isn’t much better sometimes.

Outside of the glossy paint job, the rest seems okay. The proton pack is surprisingly detailed, although mostly just made up of a brown plastic with some of the design filled in with different colors.

Overall not a great start for Leslie’s first action figure of her. 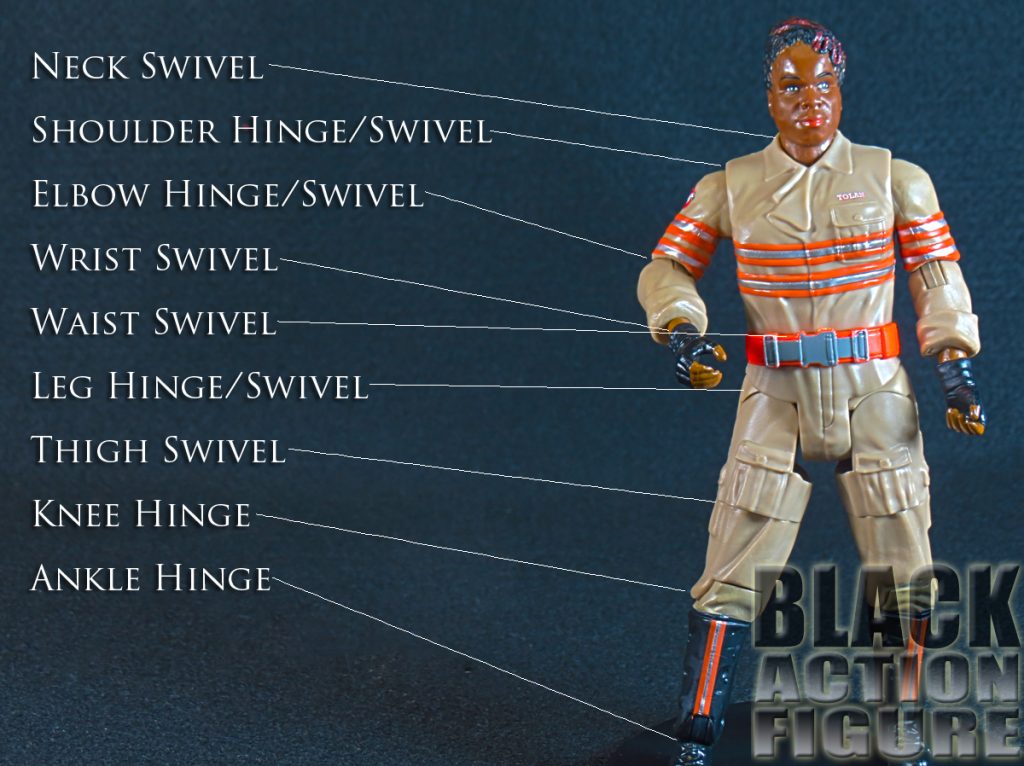 This figure has about 22+ points of articulation which is about standard Mattel fare, although we usually also see an abdominal hinge too, which this figure does not have. And that’s okay. 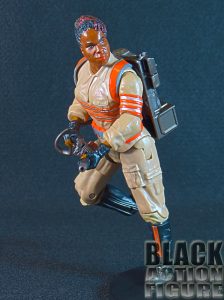 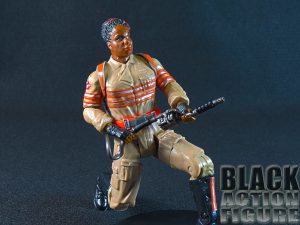 This figure is actually incredibly agile especially when paired with a figure stand. You can basically have it in a running pose thanks to super hinged ankles, or a kneeling pose. For such an otherwise average figure, I’ve probably done some of my best posing with it.

One surprise to me is that I accidentally found that this figure had waist articulation…apparently some paint had dried in the joint and I originally thought it hadn’t. I tried again applying just a little more pressure and it finally gave in.

The neck was a downfall for me. Most of the figures nowadays come as a head that attaches to a ball-joint at the neck. This figure’s head and neck are all one piece, so there will be no looking down or up for it.

Better than average, the articulation on the figure is for me the best thing about it… 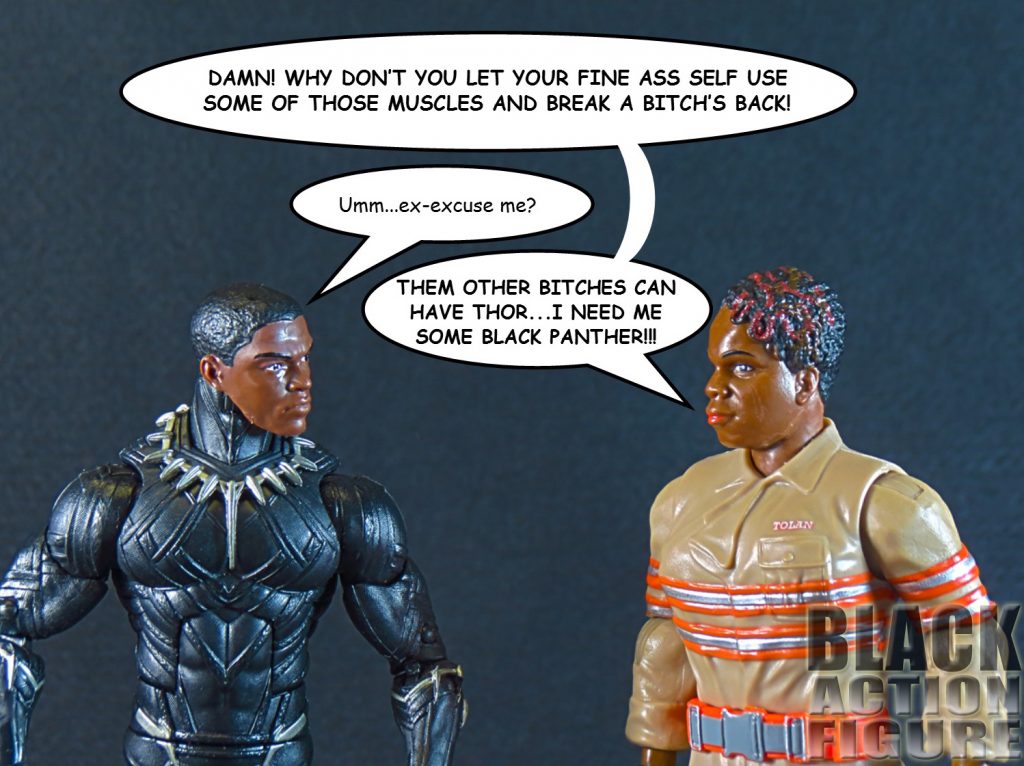 Like I said before, Leslie Jones is a funny bitch. And I think we needed a better action figure representation of her to celebrate that. I mean, I guess I’ll take what I can get. I don’t see Hot Toys stepping up to the plate anytime soon and the Japanese will mostly skip out on this franchise.

Needless to say, I hope this Ghostbusters movie does well for her sake. I hate when Saturday Night Live alums quietly disappear into the ether never to be heard from again (I’m looking at you Tim Meadows). Hopefully this can lead to more roles elsewhere…and a better figure of her to follow.