Wow, I haven’t done one of these in five months! Granted, I haven’t been reading a lot especially since I have a lot of other commitments in my life, but from time to time I can sneak in a few comic books.  One thing like I always like to remind folks…I’m two years behind.  So while most people are gearing up for a “Rebirth” or perhaps a “Civil War II”, I’m still reading old stories.  Let me know in the comments or on Facebook if you have a favorite title you would like for me to check out and maybe feature on the site… 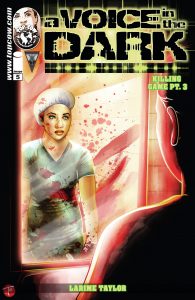 This title continues to be one of my guilty pleasure readings. No superheroes. No fantasy. No horror.

This story is simply about a biracial girl and her serial-killing, murderous tendencies as she goes through life on a college campus in a small town. Is it wrong that I’m rooting for the killer?

Really good read that I always look forward to… 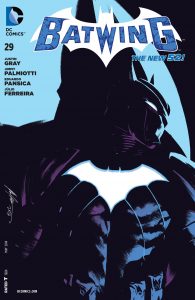 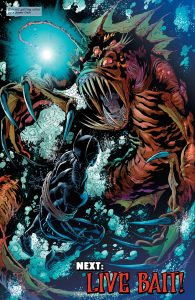 You ever read a title month after month and you know that it can’t last forever because if it’s barely holding your attention, you know that there are folks waiting to cancel it?  That’s how I feel about Batwing.

Don’t get me wrong, I really enjoy Batwing…or maybe the concept of Batwing. A Black version of Batman in a suit that’s a precursor to Batman Beyond…how can you go wrong? Yet somehow they do…

This conflict with these villains and his family has to come to an end and he should be focusing on bigger stuff…I’m really waiting for them to take this somewhere. 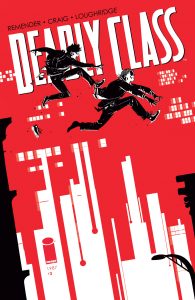 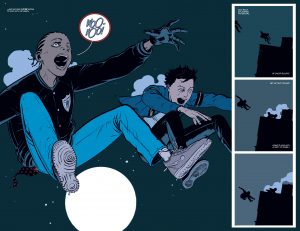 Another of those stories I look forward to every month. Not as believable as “A Voice in the Dark”, but a fun ride nonetheless.

A group of teenagers who show promise at being total badasses get recruited by an assassin school, total chaos is sure to follow.

In this issue, we see a friendship start to grow between two boys who may be at the school for the wrong reasons…

I’ll be sure to watch this one and see where it leads to.. 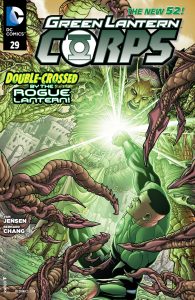 Another solid issue with my favorite Green Lantern, John Stewart, and his team as they chase a rogue Durlan lantern across the galaxy.

The Green Lantern Corps are currently under siege by the Durlan race (also known as the same race that produced Chameleon Boy from the Legionnaires). In order to get a leg up on the situation, John Stewart looks for the one person who may be able to help them, a Durlan Green Lantern that turned his back on the corps.

I continue to enjoy the Green Lantern titles and hope that continues as I see changes happening in this new “Rebirth” era. 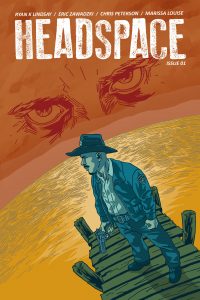 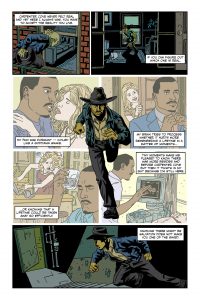 First book in the series and so far has not been too memorable.  I actually forgot what it was about besides a Black sheriff who chases down a suspect and they are on a space station maybe?

Wait until I get to issue #2 and I’ll let you know if this is worth picking up. Right now it serves as a filler to break up the monotonous rut that Marvel and DC seems to fall into sometimes.  I’ll look forward to seeing if I will actually like this story…maybe more to come… 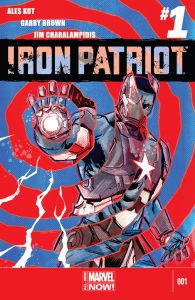 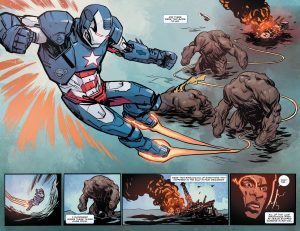 I can forgive the fact that the first Iron Patriot was actually Norman Osborne in a stolen, repainted, Iron man suit. This new iteration of Iron Patriot is actually James “Rhodey” Rhodes in a repainted War Machine suit.

Only he’ll have the power…to make sure that this title doesn’t suck shit. I can already tell it’s already shaping up to perhaps not be that long of a run.

Also, not everything that happens in the movies has to happen in the comic books too, or vice-versa (I’m looking at you Black Nick Fury). 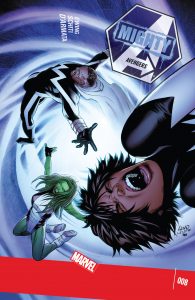 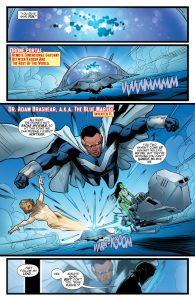 Another fun title…in this one we see She-Hulk as a confirmed part of the group kicking it with the Blue Marvel and Spectrum.

We get that old school mad scientist vibe with that old school origin story and big reveal towards the end. I love how satisfying each issue is and how it leaves me wanting more!

So far we’ve only seen the team really do one big mission. Would like to see them all together again on another big mission. 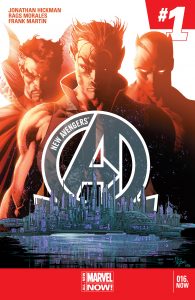 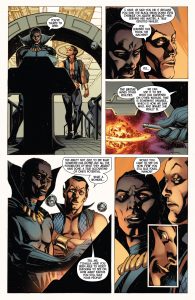 Black Panther continues to shine as a member of the mysterious superhero Illuminati that is trying to stop their world from colliding with other Earths from parallel universes.

One thing to look forward to is the bitter exchange between Black Panther and Namor.  It’s obvious how much they hate each other, but are determined to work with one another to hopefully save their universe from being destroyed. 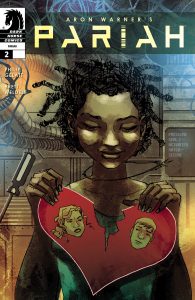 Scared for their lives, the people of Earth jettison a group of genetically modified human teens into orbit for them to hopefully never to come back.

The story goes on to show how they relate to one another and how they will use their skills to hopefully save them from a certain death.

Still early in the game for this one, but I’m enjoying so far… 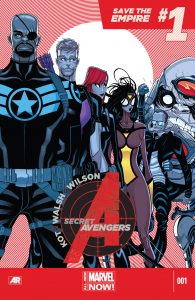 SHIELD agents Black Nick Fury and Phil Coulson lead their team of superhero black ops agents (and MODOK, who has for now begrudgingly switched sides). Kind of a different tone than the first iteration of the series.

The first series didn’t really altogether work for me. I don’t get why Hawkeye always gets teamed up with his ex-girlfriends or ex-wife, but somehow that’s supposed to work.

I do miss Taskmaster working with the group. That’s who needs to be in this group, Taskmaster and Deadpool. Between the two of them, that would sell the shit out of this comic book. 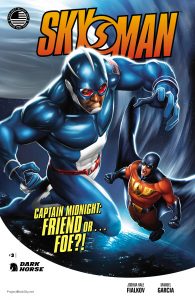 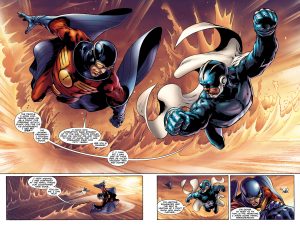 With a solid story and beautiful artwork, Skyman continues to be a solid monthly reader.

The one thing that I hope for is that they can move on with the current storyline and get into some more action.

A good read with more to come… 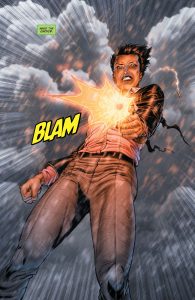 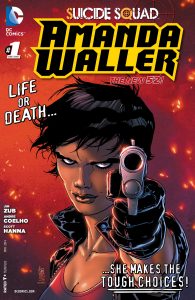 I’ve always wondered since “The New 52” came out…Waller has always been protrayed as a Black woman (sometimes overweight, sometimes not) since forever…did the “New 52” change her origin story or does the artist take liberties with her “look”? She’s either some other ethnicity or she’s Black with a great perm (or wig).

Not that any of that matters…I just like to talk shit. This comic book one-shot gets into the head of Amanda Waller and why she’s the bad-ass chick that gets to run her own black ops Suicide Squad (or Task Force X). Perhaps a good jumping on point if you have never read Suicide Squad before or want to know a little about what she’s all about. 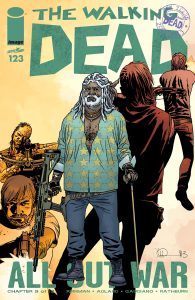 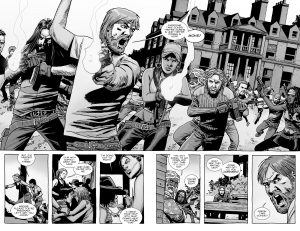 Last but not least is The Walking Dead. Never to really disappoint, except I’m about tired of this “All-Out War”. So much in fact that I haven’t even finished the second half season of the television show yet. I’m going to get to it, I’m just a little depressed we’re getting to the “Negan” era on the show and I know how well that ends up in this book.  Of course the outcome will be different on television, but I’m not sure that either will be satisfying.

I think this one is Chapter 9 (out of 12), so I’m almost over this story arc. Hope the next one works out a little better for our band of survivors…