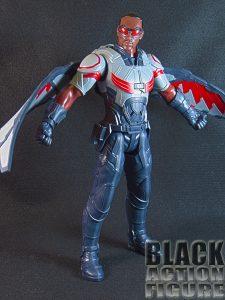 Captain America: Civil War is still going strong in it’s second weekend in theaters. I had this wonderful plan how I would celebrate everyday last week with a different post, but life happened. But while there is still a strong showing in theaters, I feel that these reviews and posts are still relevant and timely.

I will start off with saying that I never thought I would buy a Hasbro “Titan Hero Series” action (using that word loosely) figure. Take everything you hate about the 5 points of articulation that have been pouring out of a lazy ass Hasbro lately and then blow it up three times and make it even worse. That what the Titan Hero Series has been for me.

I can count on one hand how many of these Titan Hero Series figures I have actually purchased. I even bought one that I couldn’t bring myself to ever open and ended up selling it for $2 at a garage sale this past weekend. Nothing has really appealed to me. Until I saw this Falcon figure sitting in Toys R Us and I was instantly intrigued. The initial thought was “this doesn’t suck shit,” which is my usually feeling about figures in this series. Check out the review and please let me know in the comments if you agree or disagree. 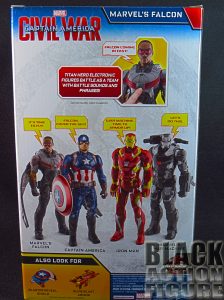 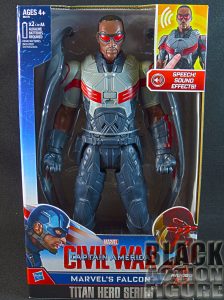 The packaging is what of course catches my eye first. This is one of the first figures out representing the new movie. I was ready for both the movie and the collectibles so of course even though it was a Titan Hero Series (calling it THS from now on) figure, I was still intrigued.

Being an electronic figure that spouts out phrases the actual character may (or may not) say, the figure itself was partially out and we were able to get a good luck at it. I’m surprised to say that at first viewing and even now I could see that it did not suck. The openness of the package allowed me to get a great look at the figure inside and see that this figure actually resembles Anthony Mackie albeit in the cheapest way possible.

Turning the package around on the back and we see the other figures in this “wave” including Captain America and Iron Man (of course) and War Machine. Now I have gotten an electronic War Machine before sometime after Iron Man 2 from Marshall’s at a steep discount. I say this because I don’t hate this War Machine printed on the back at all and have seen him several times in person. But I’m not ready yet to commit and I’m sure with the oversaturation of these figures in the market and what seems like poor sellthrough ( I see them sitting on shelves everywhere I go) I am pretty confident I will be able to pick one of these up at another steep discount.

At any rate, the packaging always seems like something that can make or break a figure…and at least this packaging got me to pick it up and examine carefully what’s inside. I am definitely conflicted because it is still a THS figure. 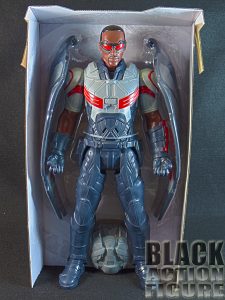 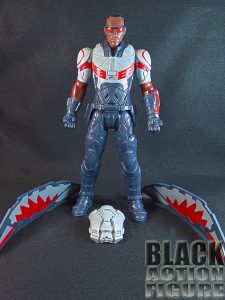 I would have been disappointed if we got a Falcon figure without his iconic wings, but rest assured that is exactly what we get…along with his backpack which is used to attach the wings. Aaaaannnndddd that’s about it. No frills with this one. You get what you pay for and what you are paying for is a cheap plastic talking figure with the basic minimum of “accessories”.

The wings themselves are extremely curved and are molded in that position so there is no way to get a “flat” look to them. That is unfortunate because they tend to look awkward if put in an “up” position. For this matter, I tend to leave them down.

The backpack is okay. What would have been better is if a slot opens up and Falcon’s robotic companion, Redwing, popped out the back. Could have been a nice and easy action figure. But again, you get what you pay for.

So to be fair, I’m basing my score a little higher because I really don’t expect much out of this figure, so whatever they give me is great. For a twenty dollar figure, this is roughly average. If it was a fifty dollar figure it would have scored low.  If I picked it up for ten bucks from TJ Maxx (you know it’s going to happen with all of the overstock), then it might have scored a little higher.  We’ll wait and see that score when I pick up that War Machine (at a discounted rate). 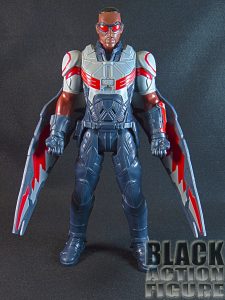 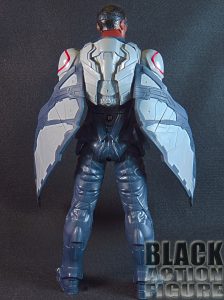 I really don’t like Titan figures. I may pick up some of these movie figures for like $5-$10 from a discount store, but other than that, they can rot on the store shelves.

With that said, this figure really got me because of its likeness to Falcon star Anthony Mackie. It’s no Hot Toy, but it does have a passable likeness to the actor.

Along with the likeness, it’s actually not a bad sculpt. The detail in the costume is pretty nice. Not as much paint application as I would have liked, but the variations are there. The red pops against the different grays and such.

I guess the one thing I can complain about is how plastic looking this figure looks. Just looking at these pictures, you can tell a cheap plastic was used to make this figure. It doesn’t have the matte look like on a Marvel Legends figure. But I can’t stress enough, you get what you pay for. But for twenty bucks, this is a pretty decent likeness and sculpting all around. 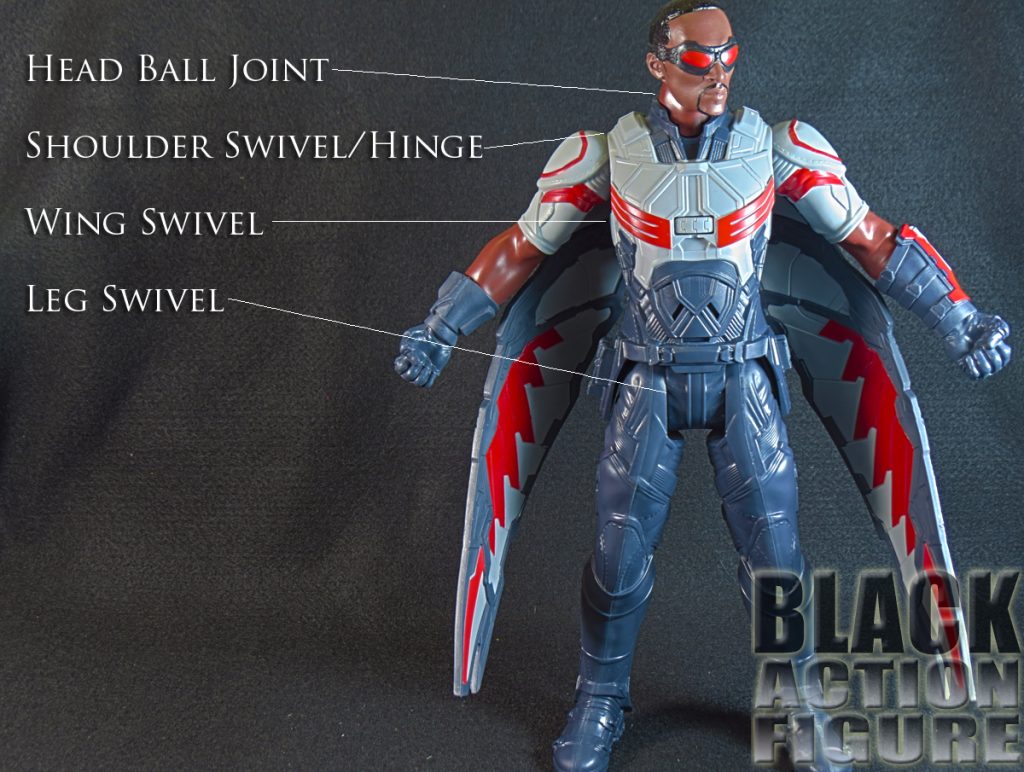 I don’t even know how to stress that if this figure did not look like Anthony Mackie, he would have stayed in the store. It’s disappointing knowing that Hasbro continues to sell figures with crappy articulation. Even Mattel has been adding extra articulation on their cheapy 12″ figures, as possibly a selling point over the crapfest which is their Titan Hero figure line.

This figure has about 7 points of articulation…9 if you count the wings.  What’s surprising is that the figure’s arm is on a swivel/hinge, which gives it better motion than I thought it would, but it is rendered almost pointless because there is no wrist articulation, so the figure’s fist is in an awkward position whenever you lift its arm.

I guess one positive point is that since there is little to no articulation in the legs, the figure is able to stand upright with almost no issue, wings up or down. But that’s just me being positive. As a collector, unless I’m purchasing a statue, I love articulation. I really like posing my figures and often revisit my display to change their positions. To me, this figure can either look left, look right, or look straight ahead. He may be going to the back of the collection…or to Goodwill if there is no reason to keep him. 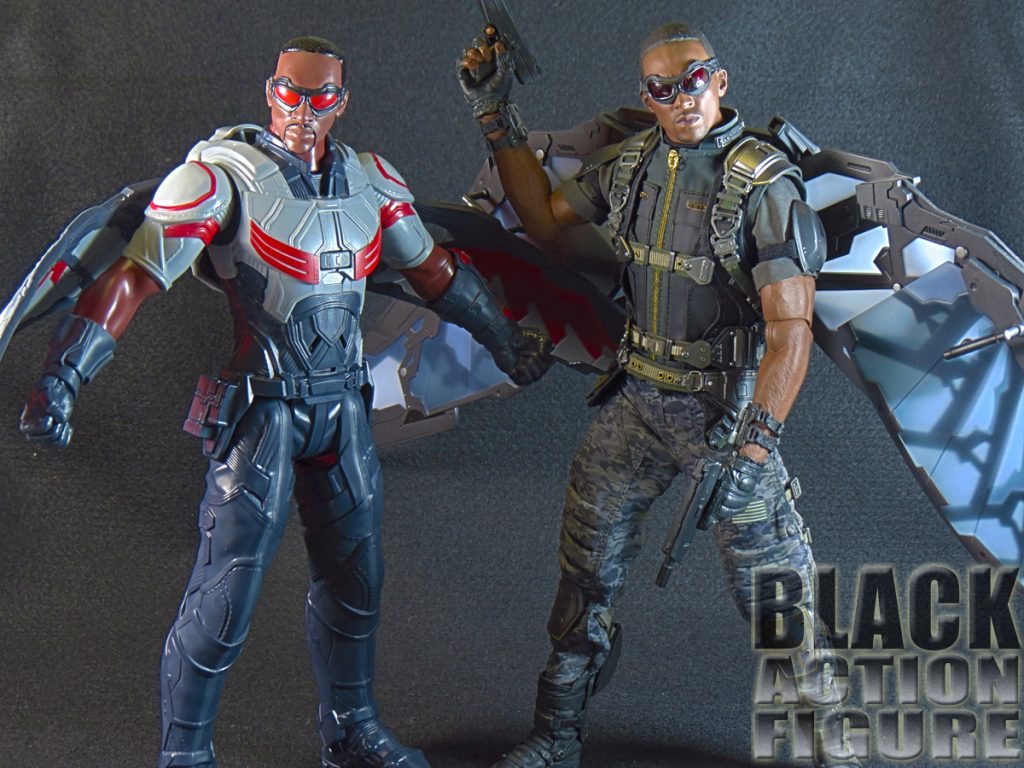 I really loved Captain America: Civil War. It checkmarked a lot of boxes in my “what a movie should have” category (if not all). When I see a good superhero movie, I am going to want collectibles from that movie.

Avengers: Age of Ultron was a wash…I came out of that movie cancelling pre-orders and avoiding buying most of the collectibles (at least at full price).

This movie made me want to get more product…and as a collector and a movie-phile, that’s what a good movie is supposed to do. Even though I got this Falcon figure before the movie came out, the hype and early reviews alone made this an easy decision.

This figure may not go into my main collection…my Hot Toys CA:CW Falcon will have that honor…but he will be a good placeholder somewhere on the shelf.  I would say that this is a great purchase for younger kids. I already got one for my daughter’s classmate for a birthday gift…hope he liked it!

If you’re not a Hot Toys collector…I think this would be a good addition to your collection to showcase your love of Falcon and the CA:CW movie. But if you do plan on getting the Hot Toys version…it would probably be wiser to use your twenty bucks towards the down payment of that figure.

NOTE: If I have some time, I’ll make a Youtube video of this figure talking…but I’m pretty sure that if you have visited any store (Walmart, Target, ToysRUs, Kmart, etc) you have heard it all.