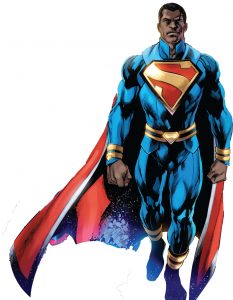 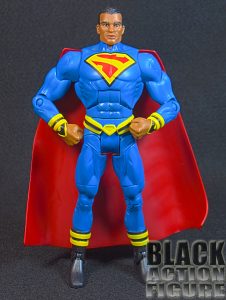 I have to say, I thought when this figure was first announced that I would have a hard time finding it. I even wondered if it would even be widely distributed after the ill critical success of Batman v Superman, which produced a metric shitload of sub-par Mattel toys. But Mattel and retail distributors proved me wrong. It seems that within a day I was able to find this figure first on Amazon, then in Wal-Mart the very next day. I have been back to a few stores now and have seen it hanging on the peg several times. So if you’re interested, go out and get him! 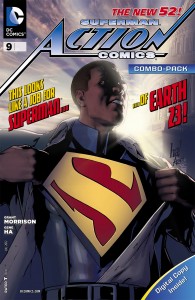 Now that I got that out of the way, I’m still in somewhat disbelief that they made a figure out of Earth 23 Superman a character that I first talked about on this site over three years ago after he appeared in an issue of Action Comics. With such a rich history of other Black superheroes that DC and Mattel could focus on, I’m kind of surprised and kind of not surprised that this is what they chose. Still no Icon, Rocket or Hardware. But I digress.

Earth 23 Superman is an alternate universe version of the Superman that we all know . From interviews with creator Grant Morrison, it is said that the basis for this version of Superman was President Obama and Mohammad Ali.

In all honesty, the Multiversity series that features this character is on my backlist and I don’t know when I’ll be able to get to it, but I’m still glad that the powers that be felt free to go ahead and put an action figure out. So before I drive myself crazy rapping Above The Law’s “Black Superman” in my head, let me go ahead and get into this review… 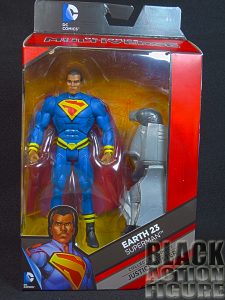 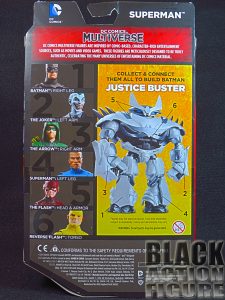 The packaging to me is not very special. Slightly reminiscent of the last time Mattel tried to put out 6″ figures (remember the “Unlimited” series), they have up the ante with resealable packaging…similar to Marvel Legends or Star Wars Black.

On the front, a basic picture window with the figures name blazoned across the bottom right corner.

On the back, we get a listing of all of the figures in this wave, including a New 52 Year One Batman and Joker, and TV Series Arrow, Flash and Reverse-Flash. All of which have been grossly unimpressive.

We also get to see the Build-A-Figure Collect & Connect figure for this series…the “Justice Buster!” Wait, really? The Justice Buster? Is this DC and Mattel’s lame attempt to try and garner some of the popularity of Marvel and Hasbro’s Hulk Buster. Unfortunately at least in terms of my own opinion, this Collect & Connect did not make any of the figures more appealing to me and will thus skip it (more in accessories). 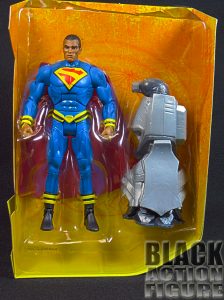 Unless you’re paying for the higher-end figures of this size, you will most likely not receive any accessories.

This figure came with one thing…the left leg of the Collect & Connect “Justice” Buster. Nope, don’t need that.  Anyone want an extra leg?

Superman is usually the harder character to produce accessories for. Since Superman himself is a weapon, Mattel has to think outside the box. They could have included an attachment for the figure’s various powers like heat vision or freeze breath. But nope…you get what you pay for and what you get is not that much. 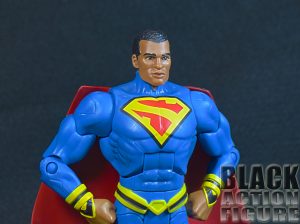 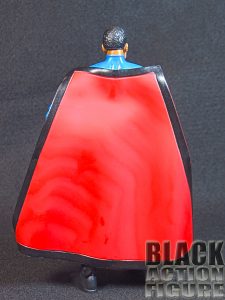 Sculpting and likeness are two hard categories especially for relatively new characters like this one. You really don’t have the reference material to base it on and it has to live up to its Earth 1 cousin.

The body itself seems like we’ve seen before in many variations. It is basically the older DC Universe Classics body more or less with a new head slapped on.

The head of the character, while it is definitely a Black man, only slightly resembles its comic book incarnation.

What drives me crazy is the lack of an “accurate” version of the “S” symbol on the chest. The “S” symbol in this case should be covering the majority of the figures front side. Unfortunately it seems the abdomen point of articulation keeps the “S” logo from getting too big.

The cape is also very accurate to the comic book. It clearly doesn’t completely wrap around the figure’s shoulders and does not have an “S” logo on it. 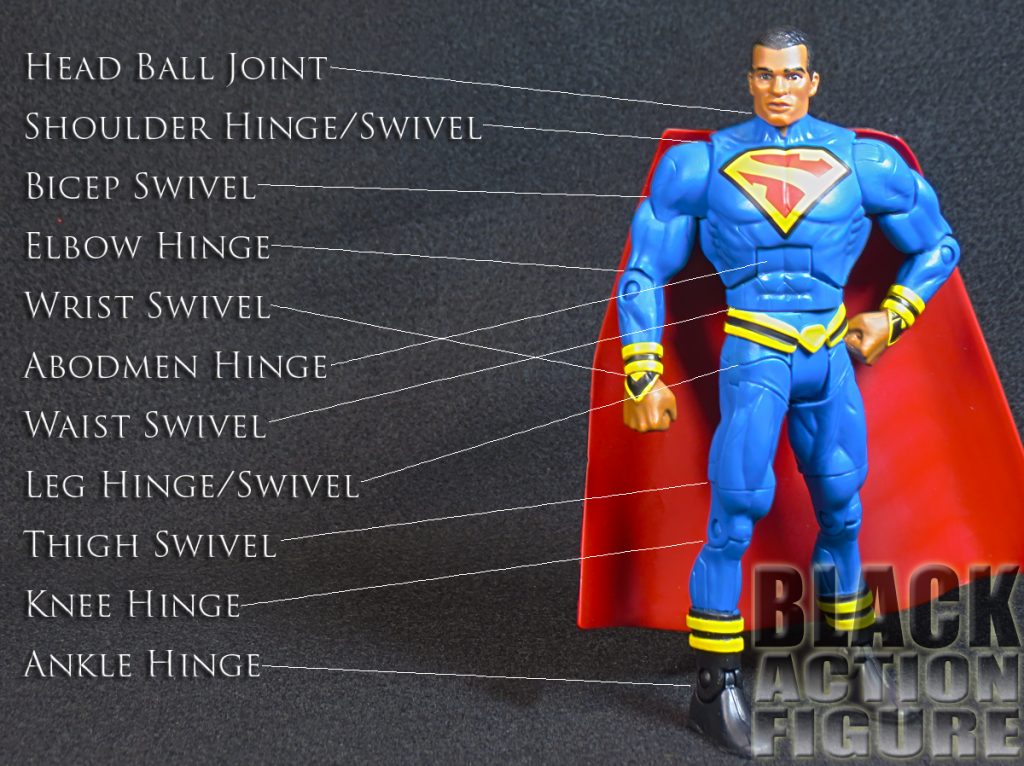 What you see is what you get and what you get is a figure with a body that Mattel continues to use. With 23+ points of articulation, this figure is no slouch. But then again, it really isn’t that great when compared to similar products like Marvel Legends and Star Wars Black.

I personally wonder when Mattel will change it up a little bit with their articulation scheme and give us something fresh and original. Unfortunately that’s not today so we will keep on truckin’ with the getting old in the tooth, lame articulation.

One thing to note, the head does not really rotate back all the way which I think is a necessity for flying characters. There is a decent enough amount to pose it some, but this ability should be better defined. I feel like Mattel has cheaped out and has all but given up. 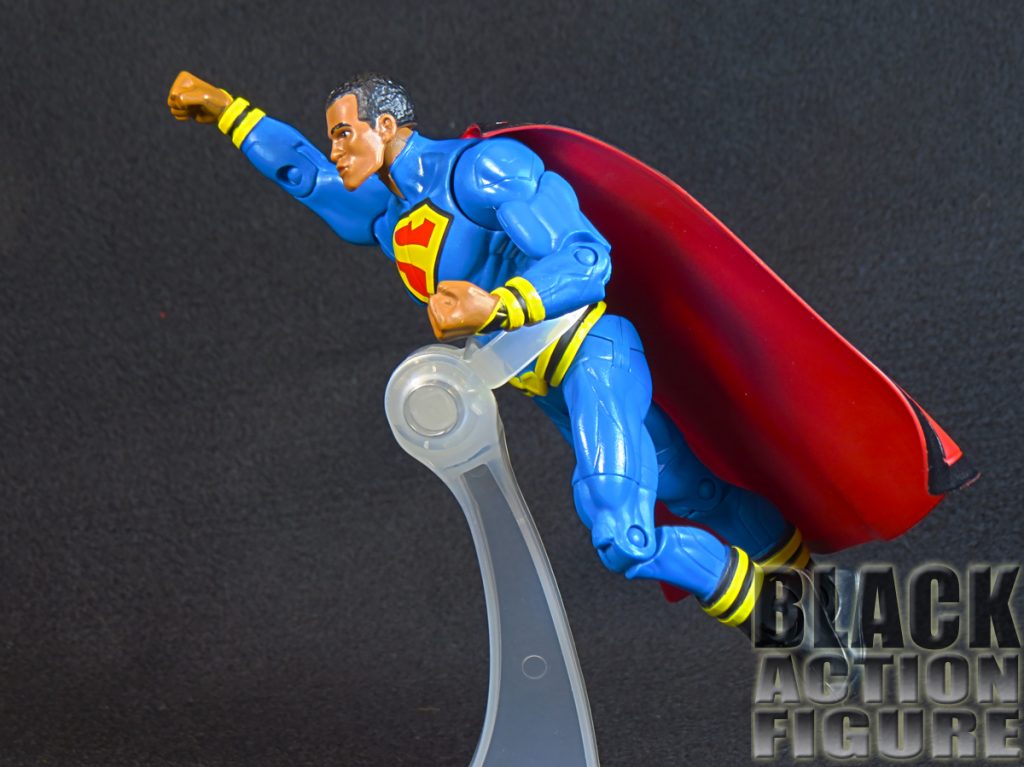 Then you have the kid demographic. What Black kid would not want a Superman action figure that looks like them? I know I definitely would want that figure. I remember the many times that I just pretended to be Superman…how cool would that be to have one that I could aspire to actually be?

Do I think it’s a little lame? Yes, a little.  Earth 23 Superman. Why couldn’t we have a Black Superman in the top 5 of the 52 universes left?!

Conspiracy aside, I do still look forward to seeing what Mattel will put out next.