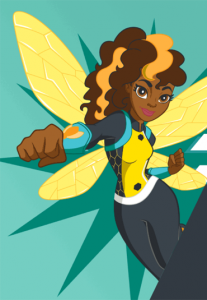 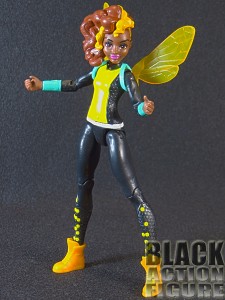 Target’s experiment is working. It’s been three weeks since I purchased this figure and my three year old has been asking me for it everytime she sees it sitting on my desk. She can’t wait to claim it for her own.

Previewed at the New York Toy Fair earlier this year, Target and Mattel has come out with an “action figure” line targeted towards young girls to coincide with an animated series featuring the same characters. In the initial wave we have a line of 6″ figures and 12″ dolls including Wonder Woman, Supergirl, Batgirl, Harley Quinn, Poison Ivy, and Bumblebee. Noticeably absent is Katana, who has been featured for the show, but so far no figure representation (more of that in the last section).

From what I’ve seen, this line has been well received. The sell through is incredible, especially on the 6″ figure line. Whether it’s collectors or it’s actual kids buying these things, but I went from seeing an endcap at Target with at least 40 figures on it last Monday to having about 2  figures on it the following Thursday. Several things are helping this push. For one thing, it’s being highly featured on the endcap in most stores. As I was looking at them, an advertisement featuring the new line came on the wall of TV’s in the electronics section behind me. And it helps that Easter is coming up, and people are prepping the Easter Baskets for their kids full of toys and candy. At any rate, these things are proving to be pretty popular, so how do they rate in the collector world? Let’s take a look at Bumblebee, the first BlackActionFigure in the line… 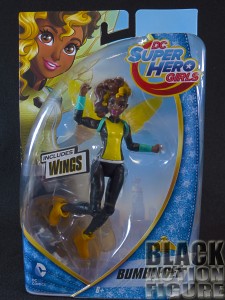 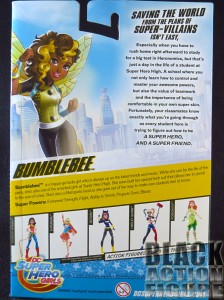 The first thing that grabs you is the bright colors on the packaging. Before it was placed on the endcap, it was in the “girls” doll aisle, next to the Barbies and the Bratz dolls, but there was no problem with it catching my eye. Not only are the colors bright, but notice it is very patriotic. The color scheme is very red, white and blue with some yellow thrown in for highlights. Notice that these are the main colors for Wonder Woman and Supergirl (not to mention Superman).  Not that I’m interpreting anything, but just food for thought.

The artistic representation of the character on the packaging card is very reminiscent of the Marvel Universe figures. The art itself with the big eyes and the bright colors remind me of the other doll offerings located in the same aisle. I guess this is how you appeal to the young.

Let me speak on this now since I brought it up. Again Marvel Universe figures and packaging were guilty of doing this too – the artwork is a close representation of the figure inside, but not exactly a 1:1 match. I find myself (in my collector mode) instantly drawn to the differences, including the two hexagonal designs on the front of the costume from the art on the front (and back) of the card, but not on the figure. Then the differences grown. In the art, the character is wearing short sleeves, while the figure is wearing long sleeves. The design on the side of the art is different from the figure itself. The list goes on and on.

Then I have to remind myself, I’m a grown-ass man buying a little girl’s toy and they don’t care about such differences. I doubt they would even notice or care. But it bothers me nonetheless and I wonder what came first…the artwork or the figure. It was obvious that at some point those teams stopped talking to each other.

At any rate, the back also includes a cutesy blurb about the line itself, and then leads into a bio-blurb of the character and her powers. Also listed is the rest of the first wave of figures. Take notice that these are being marketed as “action figures” as shown towards the bottom of the back of the packaging. These are not Dolls! 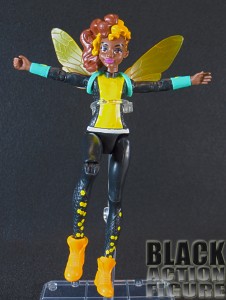 If you could not tell, this is not really an accessory-driven line. Any Marvel Legends or DC Universe Classics fans would expect maybe bigger articulated wings, a shrunk-down version of the figure, some energy attachments to show off her sonic boom powers, and maybe even a left-leg from a build-a-figure (or collect-and-connect, which I believe Mattel used to call it). Slightly off subject, the first build-a-figure should have been Giganta.

But I digress. Really for the money we’re paying ($10 for 6″ figure) we’re really lucky to get anything at all in this economy. The best they could really do is include a removable backpack that the wings are attached to. If you want to get technical, that can be considered the “accessory”. But who is going to take the wings off of Bumblebee? Besides my daughter who is constantly disassembling all of her toys.

Anyway, the wings were it, as advertised on the front of the packaging (“INCLUDES WINGS!”). Nothing exciting or unpredictable. 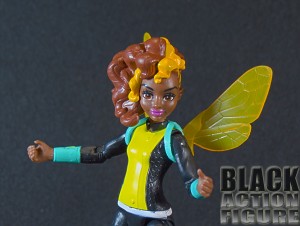 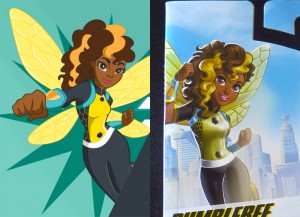 If the only reference so far was the likeness on the packaging, this figure would get a bad score. But as you see on the picture on the right, it seems the art was simplified for the show. The artistic hyper-realism was toned real down, and the colors were made flatter with less shadows.

So if we use the show’s promo art, then I would think its a better match to the figure itself. Notice that the design on the side has changed and the sleeves are now long. While I do like the design on the packaging better, the cartoon promo art is a closer match.

Just another note, the design of this whole costume really reminded me of Pixie from the X-Men. Very similar color scheme and wings.

As far as paint application which I only notice when it’s bad, it’s actually not too bad until you reach the belt area. From there it was like anything goes. Again, I can only think of the quality you get when it is only a $10 figure, so I’m not sure how much I can complain. We get sloppy paint apps on $20 dollar figures, so who am I to judge? 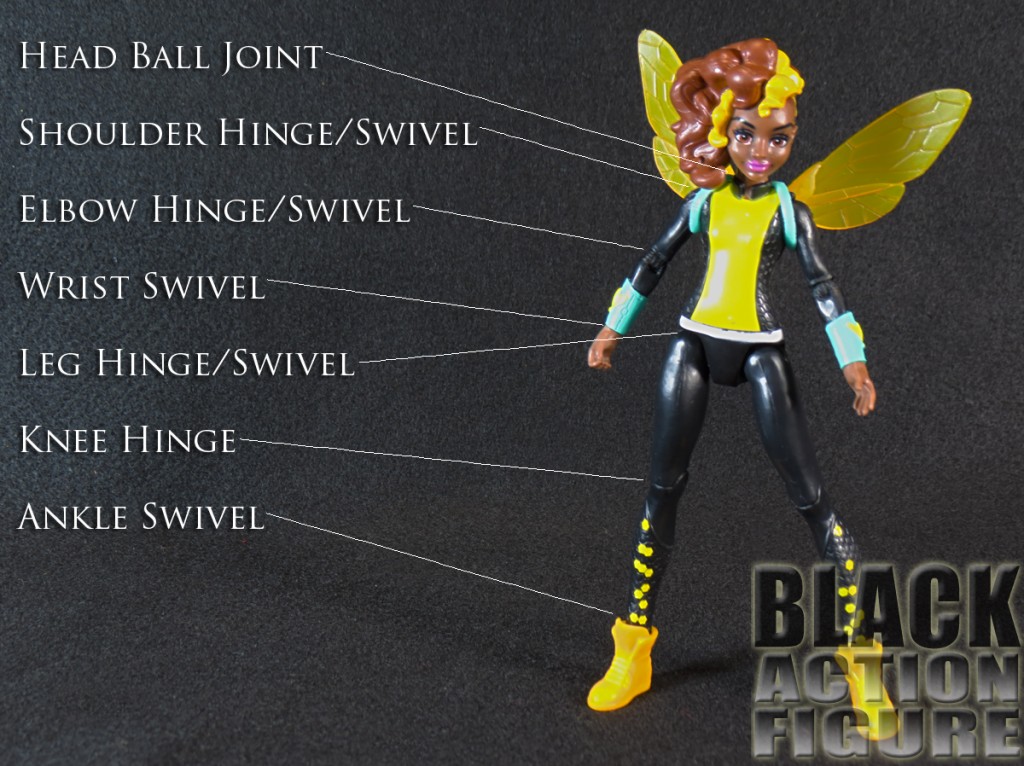 But not everything is rosy. Noticeably missing is waist articulation and better neck articulation. You can currently twist the neck left and right and down, but no-go on having the figure look up, which I believe is a necessity for any flying character. Also, an ankle hinge would have been nice as well (again, flying character). But other than that, any kid would have plenty of fun posing this character.

This figure also has some pretty awesome balance. I was able to pose the figure and keep the stance in almost any configuration I could put it in. This is great for collectors who would like to display the figure on a shelf somewhere. 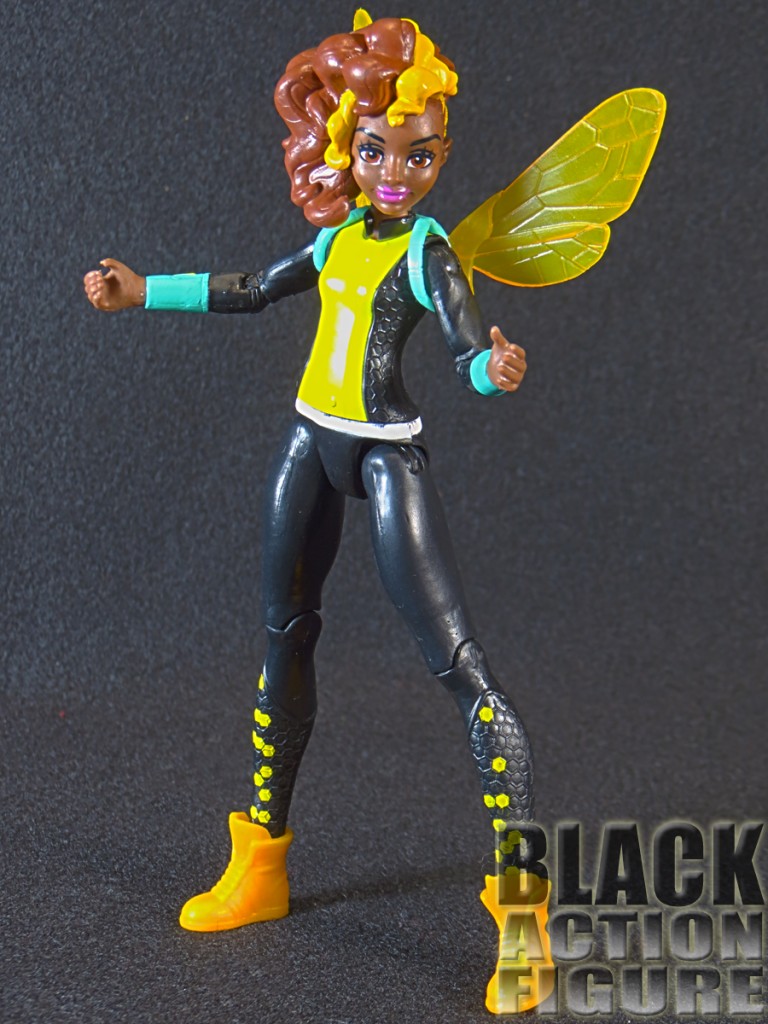 I know damn well that half of the purchases out there were not made with gifting to kids in mind. I tried to look something up about this line and found plenty of posts of grown men and women who couldn’t wait to get their hands on this line.

I’m glad they included a Black character in their line-up…I’m halfway surprised though that it wasn’t Vixen. While Bumblebee has been around since the 1970’s (really, I looked it up) I initially wouldn’t have thought she was the first choice for their token person of color, but then I think about her recent appearances on Teen Titans, Young Justice, and Teen Titans Go! animated series which probably puts her as being the most widely seen at this point.

Which brings me to Katana…what happened to Katana in the line? She’s the seventh character featured on the show, but has failed to show up in the action figure line. My first thought is because she’s being featured as a criminal in the upcoming Suicide Squad, but then again, so is Harley Quinn (who is undeniably more infamous). She’s had her own comic book series for awhile and was even in Arrow for a hot second (with occasional reoccurring appearances). Why are we not getting this figure? Let’s hope there is a second wave and they right this mistake soon.

Another random thought. I can see why collectors may like this series. It reminds me of the highly stylized characters seen on the Kotobukiya line or similar lines. Not really my cup of tea. I had my chance 2 or 3 times to pick up the entire line and chose not to do so. I would still like to see Katana and have the option of getting that figure, but other than that, this figure is most likely headed to the hands of my three year old. She’ll definitely put it to good use…