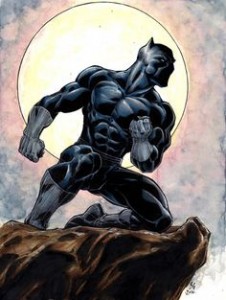 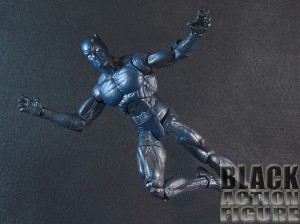 I never imagined that after I pre-ordered the Black Panther Marvel Select figure from Marvelshop.com that it would be in the mail and delivered to me just a little over a week. It never happens like that, especially items you truly want to add to your collection. Black Panther is one of my favorite characters in the Marvel Universe…and not just because he’s Black. It is because what the character embodies. He’s the king of an African nation, one of the most technically advanced nations in the Marvel universe. He’s one of the smartest men on the planet, easily in the top ten holding his own with the likes of Tony Stark, Reed Richards, Beast, Dr. Doom, etc. And he’s a complete bad-ass with his fighting skills. It would be hard pressed for me to guess who would win if he entered into a room with someone like Batman.

So yes, I collect every Black Panther collectible I can get my hands on. And it’s only going to be easier now that the character will be one of the heroes featured in Captain America: Civil War and his own feature film later down the line. When they announced an exclusive Marvel Select figure, I made sure to get on the pre-order list. And I’m very glad I did. To put it simply, this figure is pretty damn awesome. Let’s take a look at the review and see why… 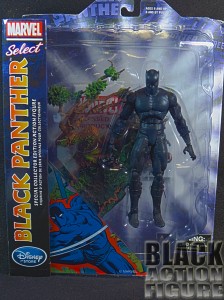 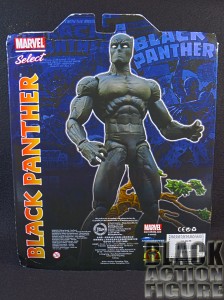 Now I have a little issue, and it’s not with the packaging. The packaging itself is basic Marvel Select. You have a self-contained bubble on a card back. We know the Marvel Select figures look good when arranged on a bookshelf. But take it out of the package, and the package itself (at least to me) is just trash. We all know this and that is not my issue.

My issue is that this is considered an adult collectible piece. So why when I received it did the package itself look beat to hell? It looked like it went through its paces…honestly, it looked like someone owned it for years and decided to sell it off on ebay. The figure inside was still good, but the package was beat to hell. Isn’t this a new figure? And if so, why did they send me the one out of the hundreds (or thousands) they have that looks this way? I’m still trying to piece that together. The corners are frayed, pieces of the cardboard is bent in places and the plastic bubble was hanging halfway off the cardboard back.

Again, this isn’t an issue for me. I open most of my action figures…especially when I’m trying to review them. I’m wondering about those mint-in-box collectors who are going to carefully store this on their shelf or in a box somewhere. I’m sure they don’t want it to look like this when it reaches them.

Unfortunately, I can’t fault Diamond Select for this…it’s pretty much Marvelshop’s fault. “Take what we give you.”  I suggest that if you can wait and you have a Disney store near you, to go there and cherry pick from that stock, because I don’t have much faith that Marvelshop or Disneystore will be able to get this to you in a desirable form.

Package is still nice. I like the artwork on the front and side and the outlined picture of the figure on the back. 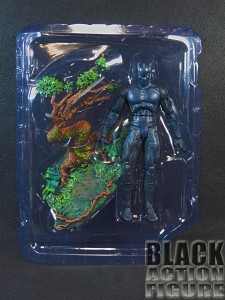 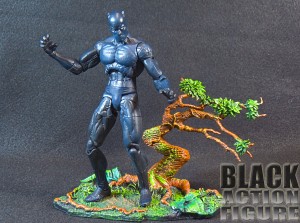 The thing with Marvel Select is that even though the figure really doesn’t have any accessories that make sense, they usually include a big-ass base that you can use to display your character on your shelf.

Included with the figure is a stand that is part grassy knoll, part gnarled, miniature tree. We get it, he’s from Africa. Really unexciting.

I think I would rather have seen one or two sets of hands. Nope, not here. Maybe a chunk of Vibranium? No, not everyone would get it. Here’s a chunk of motherland, deal with it.

Not a great accessory for an otherwise great figure so I’ll deal with it. It’s nice that we get something, but some more research would have help find some perfect accessory for the figure. 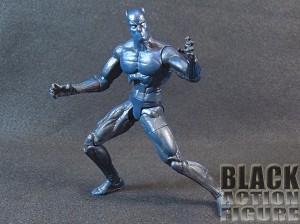 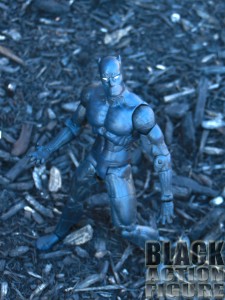 The last two scores are really not a true indication of how great this figure is, but the Sculpt/Likeness really brings that idea home. This Black Panther figure is comparatively the same design as the Hasbro Legends figure that came out a couple of years ago, but the sculpting and painting is nearly superior to an already great figure.

The first obvious difference is the paint job. While the Hasbro Marvel Legends Black Panther figure has blue highlights to make it seem that it came right from a comic book page, this one is not so highly accentuated. We still get the “it’s so black it’s blue” coloration of the costume, but done in more subtle tones making the figure a little more towards the realistic side.

The sculpting is top-notch. I always thought even how nice the Marvel Legends figure is, the head is a tad bit too big for the body. Here, the proportions seem truer to scale making an overall well sculpted figure.

The costume is a true comic representation of an older Black Panther design. Honestly if it was more in scale with Marvel Legends, then I would easily replace the Marvel Legends one with this one. This figure has become my new Black Panther favorite. 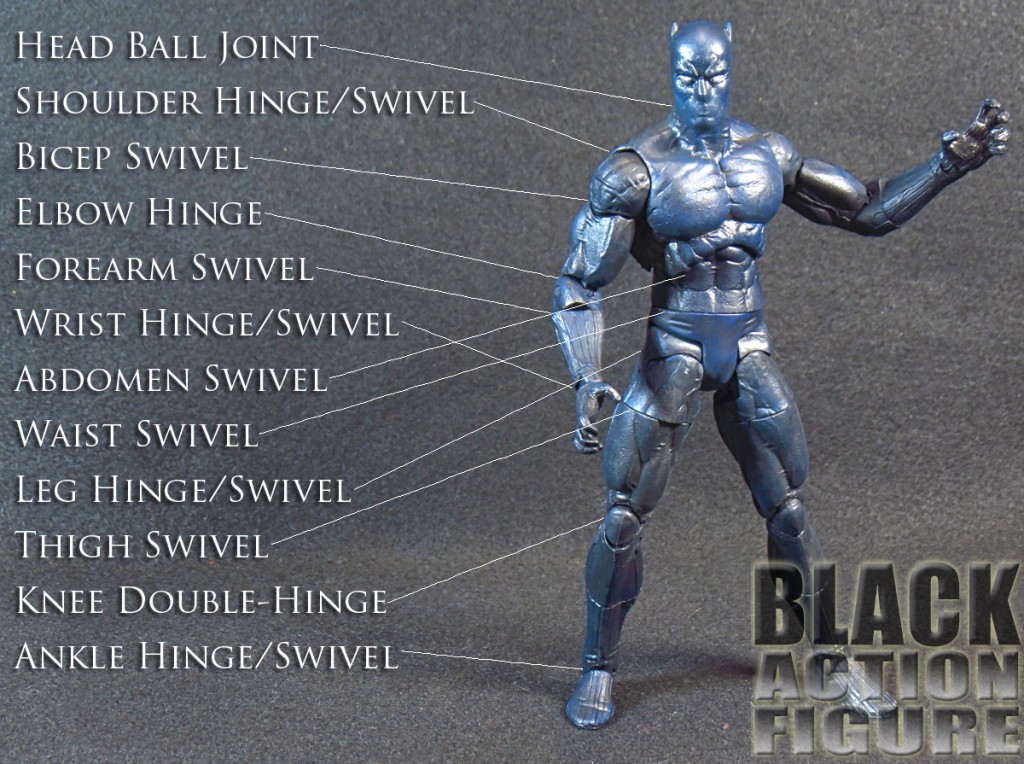 And now for the biggest surprise…this figure is well articulated! I mean, like Marvel Legends well. This figure has over 30 points of articulation. I’m assuming that this will now be the new norm for Marvel Select figures going forward as they are issuing a new Spider-Man figure and have a new Captain America figure coming out based on the movie.

Some nice touches with the new articulation includes head motion that allows the figure to look down. Also included is waist AND ab swivels. If I had some real posing skills, I would put the figure through the tests, but since I don’t, just believe me when I say that the articulation on this figure is very nice. 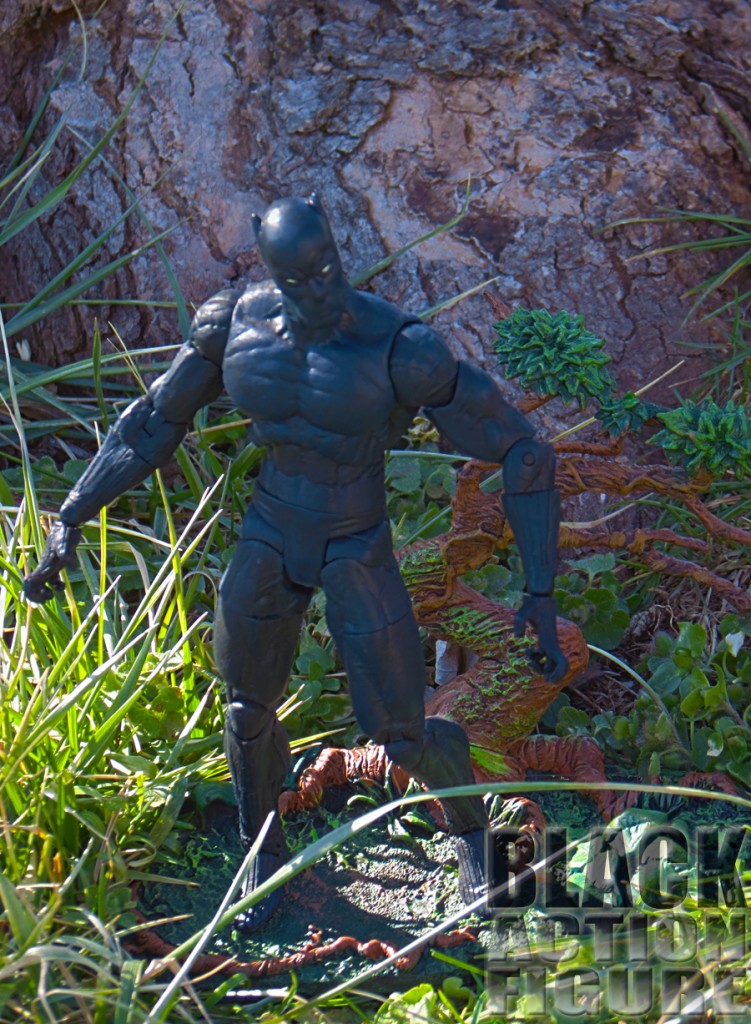 Thankfully, Marvel Select does not have the same release schedule as Hasbro Marvel Legends, otherwise we’ll all go broke and develop a disease due to all of the different scales of figures. They are able to handpick some of the ones that will potentially do well and have a strong connection with the upcoming movies. Black Panther was a no brainer pick and I’m glad to be added it to my Marvel Select collection.

What do you think about this newest offering? And do you think that it should have a wider distribution than just the Marvel and Disney store solutions?  Sound off in the comments…