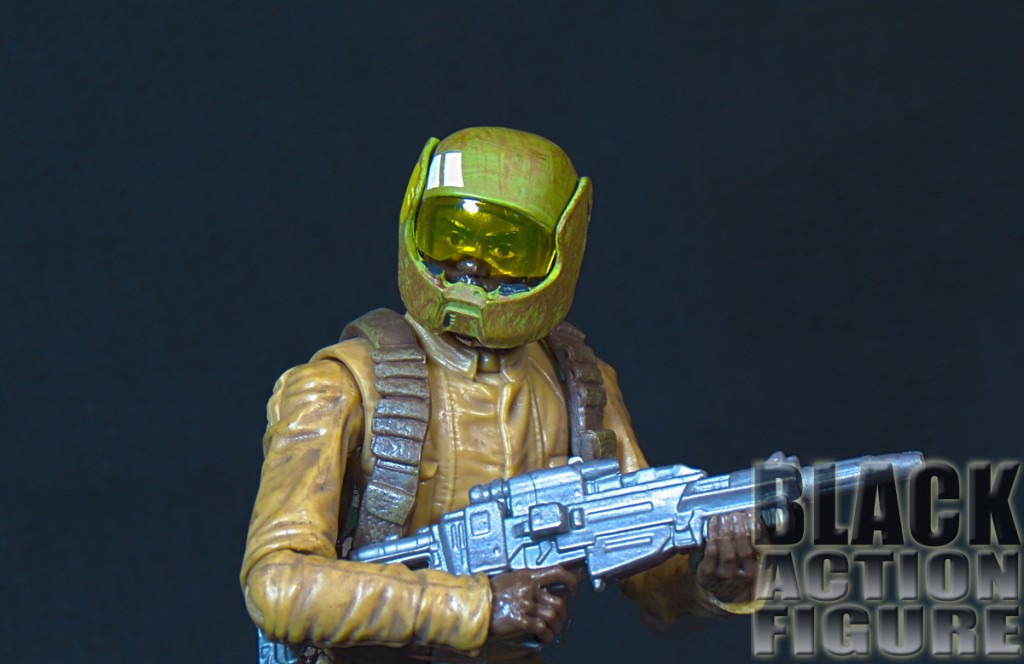 Okay, I have seen Star Wars: The Force Awakens twice now, so do you all remember when the brotha Resistance Trooper we’ll affectionately call “Tyreese Mooncrusher” passes by the screen for his big debut? You don’t? Nope, me neither. In fact, I barely remember any of the resistance fighters. I mean, I’m sure they were around. When they were at the Resistance headquarters, they were swarming all around the place, right?  Right?

Remember whatever you like, Hasbro went ahead and made a troop-building figure for the Resistance. And not that I’m complaining, but if you troop build this figure, you’re guaranteed to have people thinking that you have the space equivalent to the Black Panther party fighting those “white” Stormtroopers.  Now that’s a Star Wars I wouldn’t mind watching…

In all seriousness (sort of), I was surprised when I picked up this figure to see that he was Black. I’m kind of actually surprised that they didn’t do two different figures, one Black and one White, like they did on the 3.75″ Rebel troopers a few years back. But we all know that Hasbro is cutting corners where they can and in the long run, it doesn’t really matter if he’s Black, White, Yellow, or Red, all Resistance fighters are cannon fodder anyway. They’re just there to help progress the main character’s story, right?

Since I have him here, let’s take a look at the Star Wars Black Series 6″ Resistance Trooper. 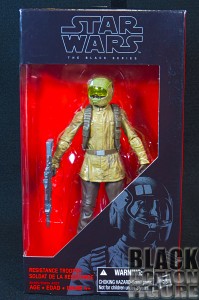 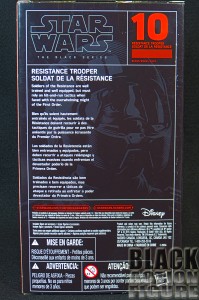 I have a confession to make. I’m actually tired of reviewing/grading the packaging. Especially since most of my figures get opened anyway and most of the packaging ends up in my trash. I was actually really doing it for the “mint-in-box” collectors out there, or the ones who like to open their figures, but then put them right back in sometimes.

With all of that said, I’ll refrain from grading the packaging unless for any reason it just blows me away. But really, between the regular releases of Marvel Legends and Star Wars Black figures, nothing has really changed all that much outside of some design elements.

Check them out. Just looking in the window and seeing all that red makes me think that we’re not getting many accessories with this figure, and that’s kind of upsetting. But other than that, kind of generic in its own right.

It’s funny to me that Hasbro is putting out a lot of characters that have either been scaled back to 30 seconds or less of screen time or completely edited out the movie altogether. I think Hasbro must be fuming right about now because outside of collectors, not many people are going to know or care who these side characters are.  If they only gave poor “Tyreese” some actual screen time, then he would sell more to the kids. As of now, I’m wondering if the kids even knew there were other fighters out there outside of the various aliens and the X-wing pilots. They’re gonna pick these things up like they picked up Constable Zuvio…not at all. 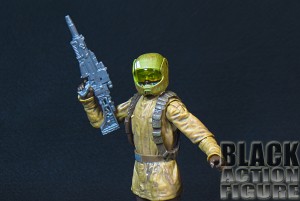 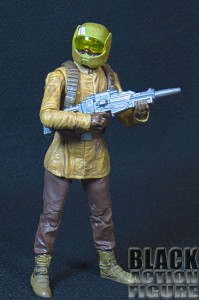 Let’s get the figure, because really that’s what it’s about, right? In terms of accessories, we are left sorely lacking. It’s bad enough that we don’t really see poor “Tyreese” in the movie, outside of a blaster, what else could he have come with, a Resistance supply box?

What can be said about the blaster? Looks like the standard generic laser rifle. Nothing special here. I actually wish Hasbro would have gave it a wash of some type to give it more of a gunmetal type look. It doesn’t look as cheap as Finn’s olive green super-soaker (see the review right here), but it does still feel cheapie, like Hasbro just really didn’t care. I mean, they know we’re going to buy it either way, right?

Comparing it to the Stormtroopers, there is no comparison. The Stormtroopers come with 2 or 3 weapons and sometimes will have a riot baton and shield or a flamethrower, etc. Not our Resistance friend here…he has to fend off the hoards of the Dark Side with one plain-ass laser rifle. 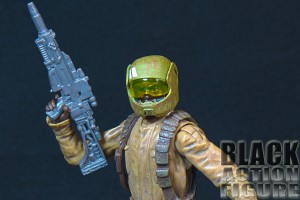 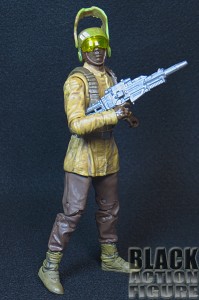 I’m going to give him an average score.  I mean, he needs something. I’m not sure if this figure was even based off of a real person, so I have nothing to compare him with.

The paint application is pretty good and he does look he has the correct colors of one of the Resistance fighters (from the ones I could even remember). 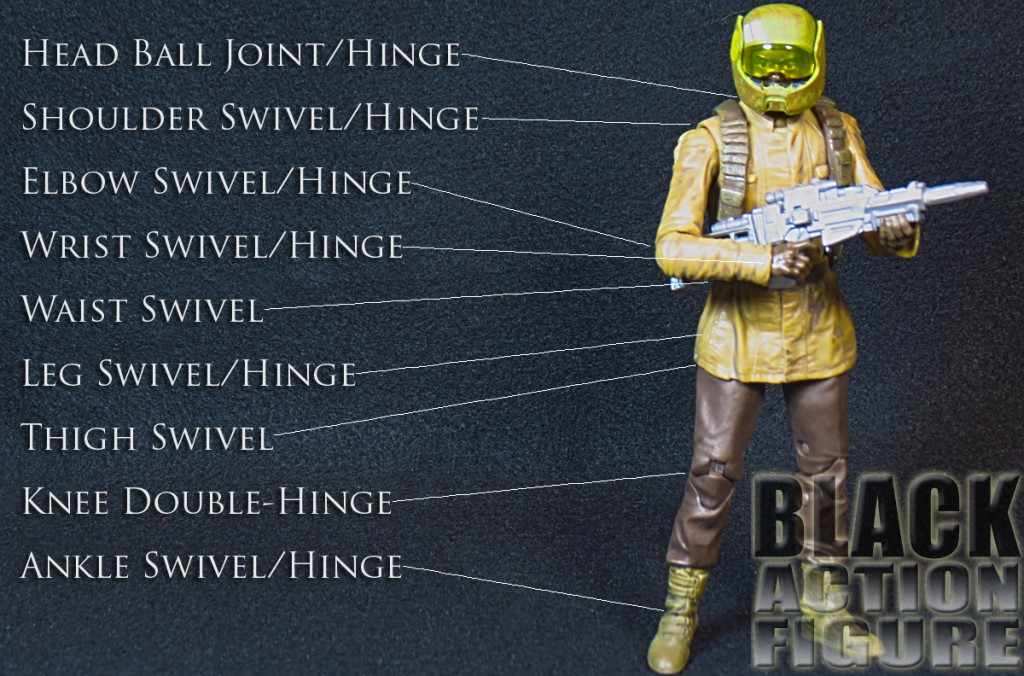 Generic-ness aside, the articulation on this figure is pretty nice! This figure has about 30+ points of articulation, including a faceplate that swings upward.

Funny story on the faceplate. I knew that it had to be articulated because of how it looked and feel, but it would not move for me and I didn’t want to break him.  I just kind of gave up that it could be moved. All until I saw that other people were able to flip the faceplate up. I tried again and put a little more muscle into it. Luckily, I believe the paint application just made it stick a little more than usual and I got to see “Tyreese” a little better.

One major thing to note – even though he does have waist articulation, part of the jacket assembly prevents this figure from articulating at the waist. A huge deduction for that. I think it would have been better if they just didn’t include waist articulation…in that way, I wouldn’t expect it.

On the plus side, this figure has the extra hinge on the neck, allowing it to have a greater range of motion than figures that don’t have it, meaning it can look up or down better than other action figures. 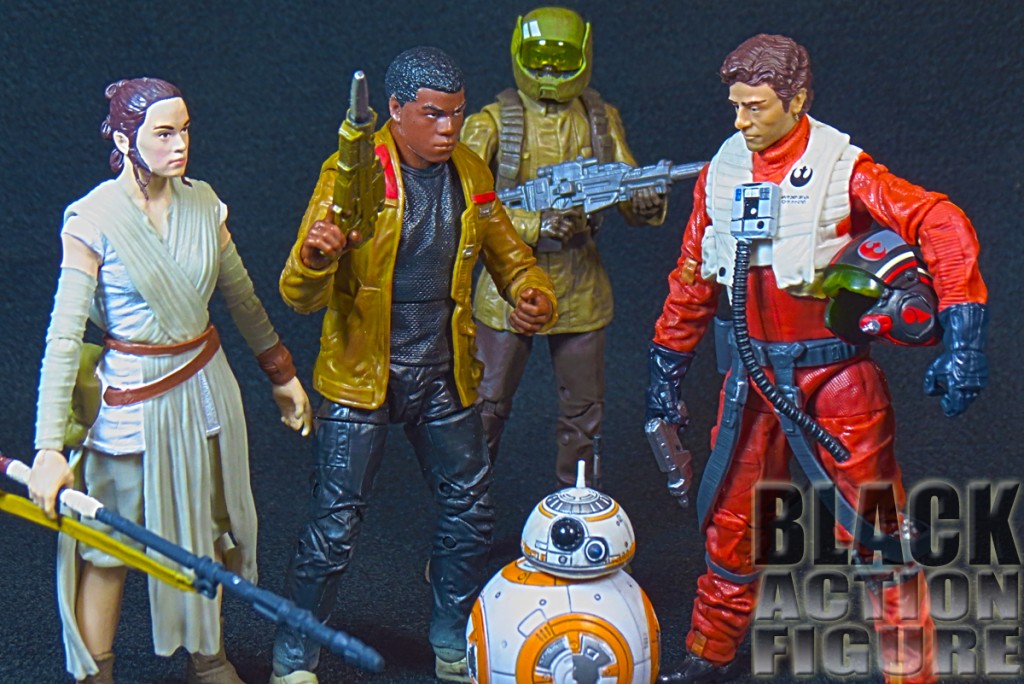 At the end of the day, this figure is going to sell no matter what. As the movie nears the $2 billion mark world-wide, this marketing giant will sell almost anything as long as they slap the Star Wars name on it. And I’m pretty sure they have tried.

I really hope that Hasbro stops setting this trend of releasing stuff that has very little to do with the actual movie because they were edited away or something. At least little kids will have something for their 10 different First Order Stormtroopers to fire at.

I really can’t wait until this movie will come out on DVD (actually digital, because, you know I know I can do that). I’m going to go frame by frame until I see this guy, just to prove to myself that he exists. If he doesn’t, then KMBA Hasbro.