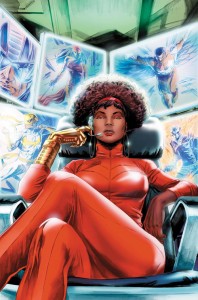 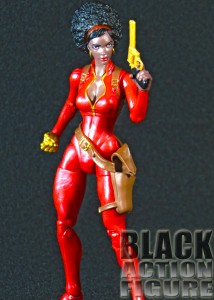 If you are a Hasbro Marvel Legends fan, then you already know that this has been a busy year because they have been pumping out Marvel Legends figures left and right with no end at sight. I can’t even begin to name all of the characters they have or will put out this year alone, including the Build-A-Figures and exclusives, but I wouldn’t be surprised if the number would be close to around 100. Just looking back at the lists I know they’ve already put out about 70+ figures.

With so many different (and sometimes reiterated) characters, some character choices have been a pleasurable surprise to me. Case in point, I never expected to ever own a Misty Knight action figure. I’ve been a Misty Knight fan for a long time and the last thing I enjoyed her in was The Fearless Defenders with Valkyrie and company.

Even Hasbro’s distribution has been inherently better. I never expected to walk into a store and walk out with a figure that I wanted (without doing some serious searching). But I was able to do just that at Toys R Us, a store that never seems to have what you want. A quick Amazon search even showed that she was available (and at a cheaper price than TRU). Before I get into the review, I’m just going to say this now…go ahead and order it…here’s the link

. Marvel does not have any end to their character selection, but now is the time to capitalize on owning this figure because I kind of doubt we will see it again anytime soon… 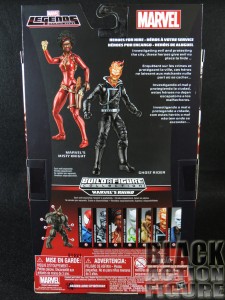 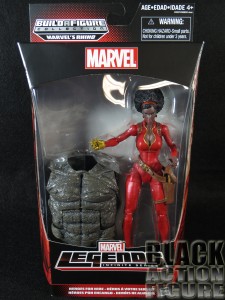 Like most of the newer Marvel Legends Infinite series, Misty Knight is packaged in the nice collectible packaging.

The front labels Misty as part of the “Heroes for Hire” series. This is where it gets weird. When you flip it around to the back, you see the “Heroes for Hire” series consists of “Marvel’s Misty Knight” and “Ghost Rider”. This is weird because I don’t usually equate Ghost Rider as a “Hero for Hire”, not because he hasn’t been one (I’m sure almost all B-Heroes and under has taken a turn as one), but because he hasn’t been one in recent issues.

Then there’s the case of the Build-A-Figure. You see, I would name another character in the series, White Tiger, a “Hero for Hire” before Ghost Rider. And that would make more sense, especially since both Misty Knight and White Tiger come with the same Build-A-Figure piece. It defies logic and must have been some weird decisions coming from corporate about this apparent mixup.

Anyway, the back again is pretty standard. What’s interesting to note is the different languages (on the front and back). It’s like Hasbro has stuck with this universal packaging for a while now and it saves them a couple of bucks from using two or more different packaging for different countries. Bravo to you Hasbro for saving a couple of bucks…then turning around and charging us more while you’re saving. Capitalism in its finest. But I digress… 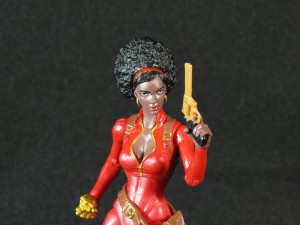 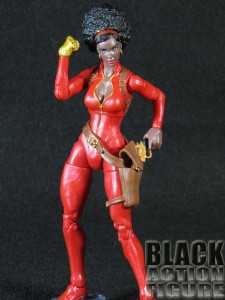 The second Hasbro figure within the last week that I have reviewed that has only one accessory (I’m looking at you Finn). This figure comes with a gold revolver, a possible 357 Magnum. But unlike Finn, Misty Knight has two advantages: the first advantage is that this figure has a holster in which you can place the gun when not in the hand, and the second advantage is that this figure comes with a Build-A-Figure Rhino piece, so at least I know I’m 1/6 of the way of having a whole other figure.

Because of those two advantages, I will have to rate this figure a little higher than I did Finn. But I think this figure could have come with two different replacement arm accessories showcasing the fact that she has a bionic right arm. In a previous wave, the Marvel Legends Machine Man figure came with replacement extended arms, so I don’t think having a couple accessories of that nature would be that much of a stretch (pun not intended). 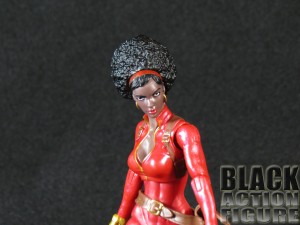 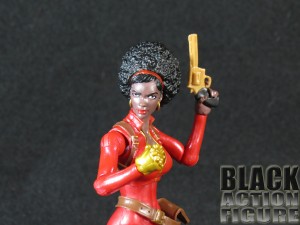 Let’s speak on the sculpting first…top notch. I love the Afro. I love the cleavage revealing jump suit. I love the holster, even if it is proportionately a little too big. But everything works well and the figure is sculpted right from the pages of Fearless Defenders.

But let’s talk about the paint for a minute. You ever get a great figure only for something to be painted awkwardly and throw off the whole figure? For me, it was this figure and the figure’s eyes. For some reason, the left eye was not drawn symmetrically with the right eye, causing the figure to look like it has a glass eye. The only pose that looked mildly correct to me was with the figures head down looking directly at me. Otherwise every other shot seems awkward. The figure is either staring aimlessly off to the distance or just looks cock-eyed. I’m hoping that it was a painting error and that all Misty Knight figures are not like this.

Really, I just have to keep in mind that this is a Misty Knight action figure. A great sculpt with a slightly awkward paint app is okay, right? 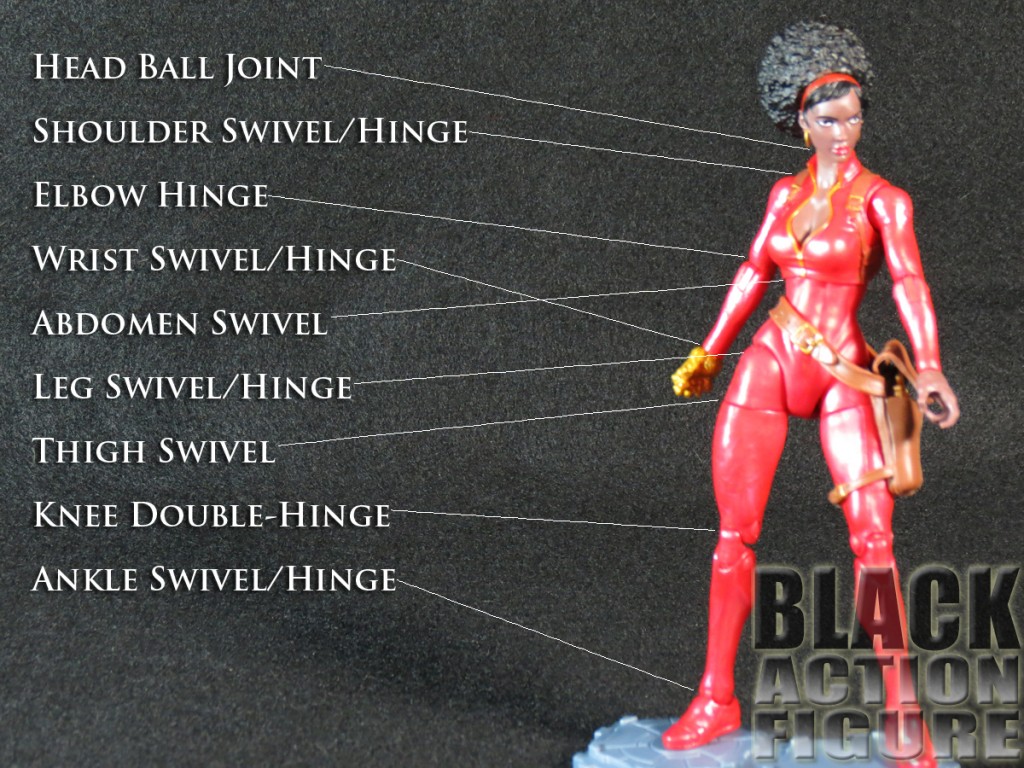 This figure has a respectable 26+ points of articulation. Some of the highlights include the wrist hinge and the ankle swivel/hinge, making for some great poses.

But there are two huge misses. First, I was unable to keep the figure standing without the help of a figure stand. This seems to happen with most Marvel Legends females, although this has been the hardest one to keep standing.

The other miss is the head articulation. The newest Marvel Legends figures have been able to put their head all the way back, in a “looking up” pose. Because of the sculpt of this figure’s hair, that articulation has been made nonexistent. To the left, right, and slightly down are the only ways this figure can be posed.

Other than those two huge misses, I enjoyed posing the figure. I even took the recent Valkyrie figure and attempted to pose the two figures together like their iconic pose in The Fearless Defenders series: 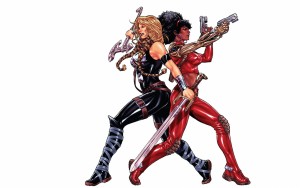 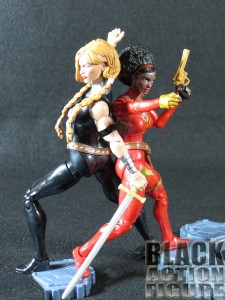 I was kind of close, but I have to say that it was very hard getting even this much without figure stands and a lot of patience… 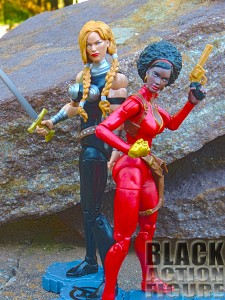 Seriously yall…I can’t reiterate enough. I really can’t believe we got a Misty Knight figure. If they follow up one day with a Colleen Wing figure, I think I would lose it.

I really like the diversity in the last few waves and hope it continues. While I know we should be getting a Falcon-Captain America soon, I would love to see other diverse characters like the Blue Marvel, Manifold, Sunspot, Photon/Pulsar/Spectrum, Rage (which we should be getting in 3.75″), or the new Power Man. Shit, I would settle for the new Blade figure they promised us for the last 3-4 years.

Go out and get this figure now!