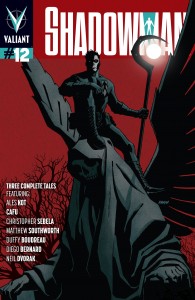 The verdict is still kind of out on Shadowman. I love the premise, but at this point we’re 12 issues in, and there still doesn’t seem to be a real established storyline. The hero, Shadowman, still seems kind of shallow. The stories read okay but I really wish there was more depth.

At any rate, even at this point you can pick up the story and still know what’s going on. I think the weirdest part of the whole book is that Shadowman doesn’t feel attached to the Valiant universe unlike the other titles (Harbinger, X-O Manowar, Archer & Armstrong, etc.).  Not that it necessarily has to, but I feel more of a connection with the other titles sometimes.

Still a solid read, so check it out and let me know what you think about it in the comments. 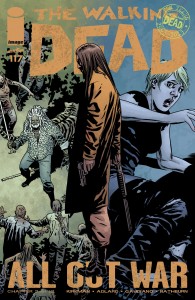 I love The Walking Dead…I loved the comic book before the tv show, but both have their strong (and weak points). Case in point, by this issue we are still dealing with Negan, the main antagonist of the story for the last few issues. And it is getting pretty damn old. I wish someone could just put a bullet in his head already. 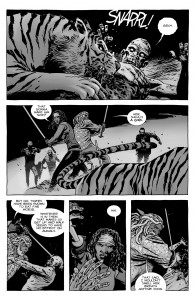 I also want this storyline to hopefully be done soon because I believe we are approaching the “Negan” era on the TV show, and I want to see how the comic book wraps up this storyline before comparing it to the tv show.

Still loving The Walking Dead every issue.  And every issue we see Michonne swinging that sword is a must read!