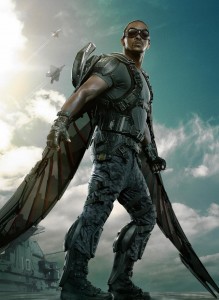 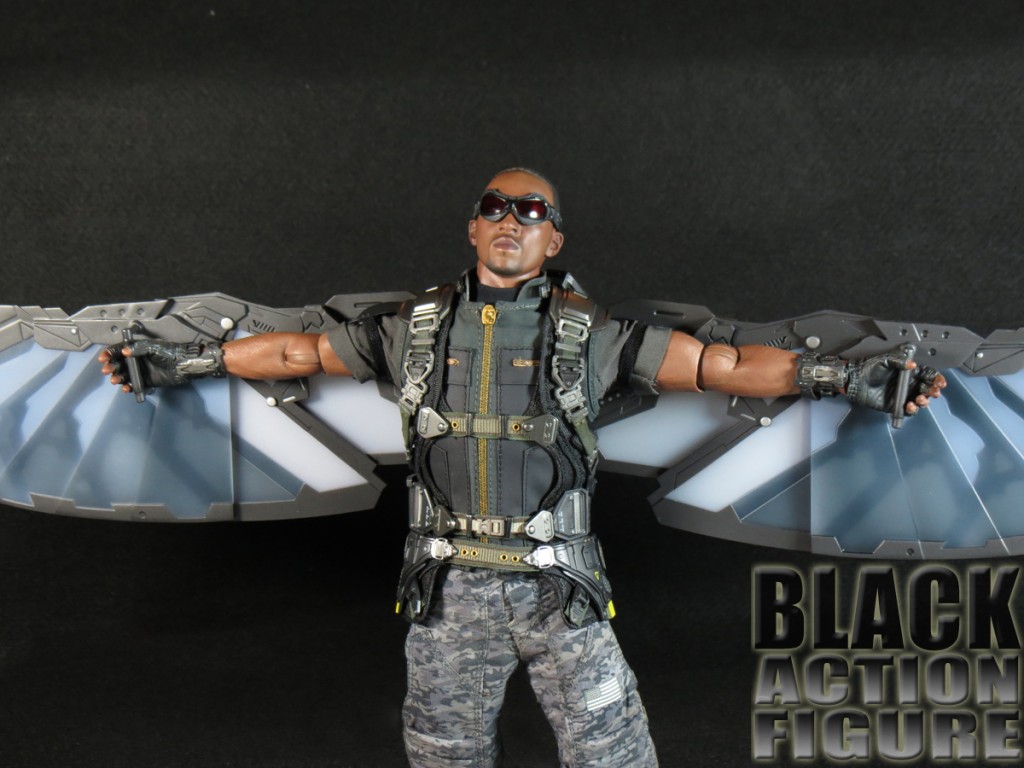 For a person who collects and reviews action figures and toys, I must admit that this has been the most fun doing a review of an action figure in a long time. Falcon from the ‘Captain America: Winter Soldier’ movie has been one of my most favorite characters in the Marvel movie franchise (next to War Machine). They have taken Captain America’s partner-in-crimefighting from the comic books and have modernized him for the 21st century.

The Falcon portrayed in this movie is kind of a mix of the regular-universe (616) Falcon and the ultimate-universe (1610) Ultimate Falcon (both from the comic books). And he’s just damned awesome all around.

From the minute I put my Hot Toys preorder in, I knew I wanted this figure. I knew this figure would have all of the awesomeness that Hot Toys usually puts into their action figures. And after the disappointing 3.75″ movie figure and 7″ Marvel Select figure (not to mention a noticeably absent Marvel Legends figure), I need this figure to be beyond awesome, and not surprisingly Hot Toys has come through. 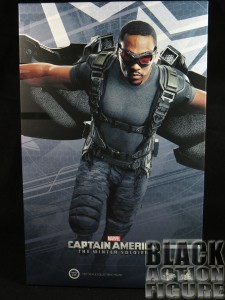 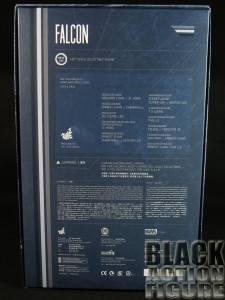 While deservedly still awesome, I was not as impressed with this box as I have been in the past with Hot Toys’ packaging.

The front of the box features a 3/4 wraparound image of the Falcon and the back has all of the facts, credits, notes, etc. What I felt was missing was the awesome “WOW” factor you get when opening a Hot Toys action figure. I was looking for the translucent window slip-cover or the metallic overlay on the front.

Not this time. And where it is sometimes a joy going through the “levels” of the packaging on a Hot Toys feature box, the front of the box can be simply slipped off…while it does reveal an insert cover of the Falcon Hot Toy, it doesn’t lend to the excitement or the anticipation I usually get when unboxing one of these figures. It seems a little shallow to be disappointed at such a thing, but in this case I was very disappointed. We don’t even get a picture window to preview the figure before being able to open the box. 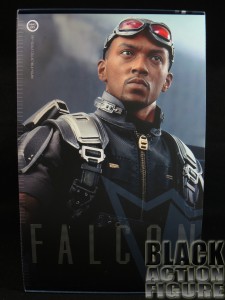 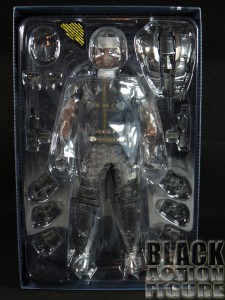 I’m hoping with the slew of ‘Avengers: Age of Ultron’ figures coming out that they don’t make the same mistake. I already have two more Hot Toys figure reviews in the works, so hopefully my disappointment in this apparent lack of effort in packaging this figure is made up by these other figures.

Even Noland, from my last Hot Toys review had a better box than this one…and that was a decidedly subpar figure.  Maybe that’s how Hot Toys operates… 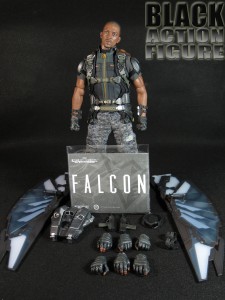 As always Hot Toys brings the heat in accessories for their premium action figures. I mean, it’s the friggin’ Falcon, so you know it has to have at least some kick-ass wings.

One thing to note, it is often overlooked (mainly by me) but usually the clothes can be considered “an accessory”, especially those with working zippers, buttons, etc. Falcon’s movie-accurate suit is just too awesome for words. I remember when I got my first Hot Toy, Nick Fury/Sam Jackson, and I was amazed by how the zipper actually works! Now while I have gotten several premium 1/6 scale figures since then, I’m still amazed at a working almost to scale zipper working on a figure that is 17% the size of a normal human. Then I get sort of depressed because I think of the tiny Chinese hands that must be putting these together. Then I look at my figure and get over it again. 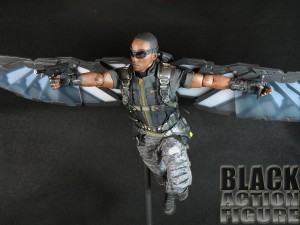 I’m not sure how, but both the Marvel Select figure and the 3.75″ movie figure both missed out on including guns with the figure. I can almost forgive Hasbro and their silly version of what they call Falcon, but Marvel Select is usually on point and missed the ball on it. Thankfully (and expectedly), Hot Toys comes through and includes an awesome pair of weapons for Falcon to wield.

This figure also comes with a stand, but not the same basic stand that came with Captain America or the Winter Soldier. This is a bigger base stand with a long pole that will allow you to pose the figure in flying poses. An added plus! 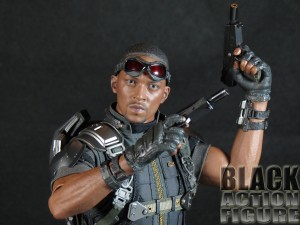 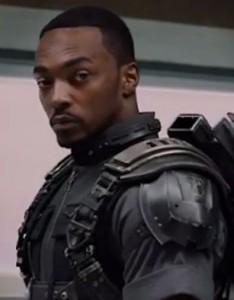 I’ve seen forums and other reviewers say that Hot Toys missed the mark on the likeness department, but I disagree. I think the likeness is pretty much on point. I think it helps that I’ve seen most of Anthony Mackie’s previous movies (‘8 Mile’, ‘She Hate Me’, ‘The Manchurian Candidate’, and even unfortunately ‘Pain & Gain’) so I feel I may have a better reference point. A lot of reviewers don’t even remember him from anything and think he’s a relatively new actor. Needless to say, I think the head sculpt is very accurate.

The uniform is also very detailed and accurate to the movie. Again, Hot Toys has provided us with an extremely movie-accurate version…you pretty much get what you pay for. 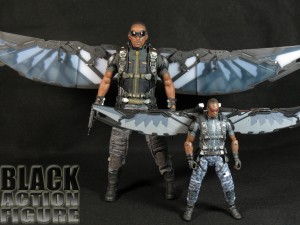 orgive me for saying this but I did a previous review on the Marvel Select Movie Falcon. While that satisfied a much needed desire for an action figure version of a movie favorite, this Hot Toys figure literally makes (forgive my political incorrectness) that figure look like its retarded half-bred cousin. While accurate in detail, the face sculpt was a mess on this figure. If anything, the Marvel Select figure cemented the fact that I was going to purchase the Hot Toys figure if for anything just to have a movie accurate version. 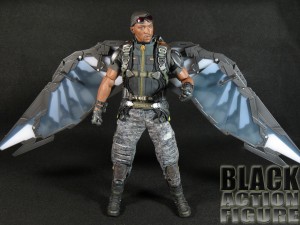 To note, even the wings are partially articulated, allowing you to even bend them down in a fashion (eat that Marvel Select). My only desire is if they could be even more articulated than they are…maybe even bending all the way back to simulate that he is in a nose dive or something to that nature. 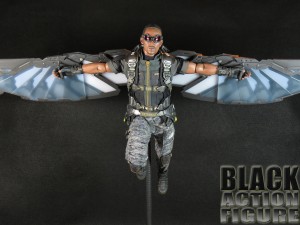 One other thing I noticed about the arms – in order for the hands to grab on to the wings, you must kind of pull out the arm (kind of like dislocating it) to be able to twist it around to get it in the position it needs to grab the wings. Not completely user-friendly, but enough to the point in which you can do your flying poses.

Also, I’m not sure all Hot Toys are like this, but you’re able to bend his head back far enough to simulate better flying poses. In the end, you are left with a hyper-articulated figure that’s able to pull the in-air or on-ground maneuvers that you desire. 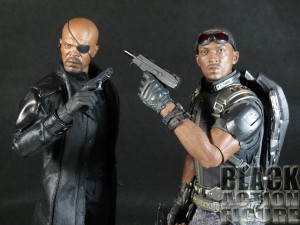 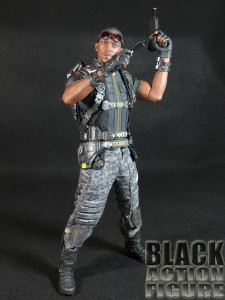 Avengers: Age of Ultron is in less than one week, and I have already seen a screen shot with Falcon/Anthony Mackie talking to Tony Stark/Robert Downey Jr., so we know that Falcon will play some role, however minor in this film. And we know that he will definitely be in the next Captain America movie (Civil War!) so this character is here to stay!

This figure is definitely an added bonus to my collection…second only to Nick Fury (and War Machine too…). I can’t wait to see what they do with him. Hopefully what they don’t do with him is put him in another uniform justifying Hot Toys to make another Falcon figure…I’m perfectly okay with this one.