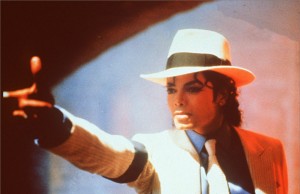 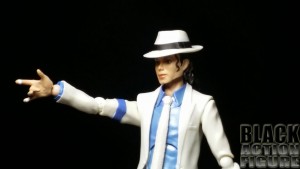 When it comes to 6″ action figures, I have usually stayed in the Hasbro/Mattel realm. I often see other offerings on toy sites that deal with imported figures (mainly from Japan), but who wants to pay a more premium price for the same character?

Well, I’ve recently purchased some SH Figuarts action figures from Bandai, and I am now insanely jealous of the Japanese. “Why” you ask? Because these are some of the best damn figures on the market. Upon opening, I discover they are almost like opening mini-Hot Toys figures…which is probably the justification for their premium pricing. 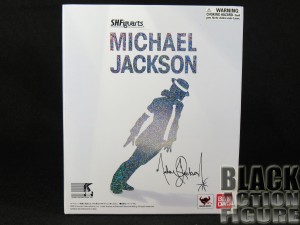 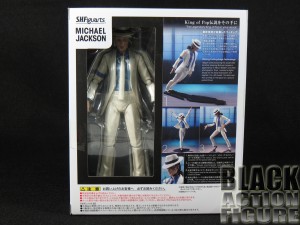 I recently purchased three different SH Figuarts action figures…Michael Jackson, Iron Patriot, and Injustice Batman. And all three come in different packaging. So the first thing I’ve noticed is that the packaging is not dependent on the brand, but more the figure inside. That alone makes it extremely different.

The front…uhh, the back…uhh…well, one side of the box has the words “Michael Jackson” and his silhouette doing his infamous “Smooth Criminal” lean embossed in silver. We also get a reproduction of the King of Pop’s signature.

On the other side of the box, we get a window showcasing the figure itself along with several pictures of poses the figure can be placed in. 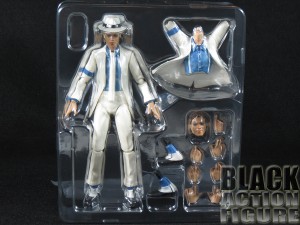 Once you open the box, you’re presented with the figure and all available accessories (which will be detailed in the next section). I like the clam shell where it keeps everything in place and secure without the dreaded “twisty ties”. The shell itself is easy enough to open, but be careful. If too much force is used opening the shell, all of the extra accessories could pop out and fly all over the place. I had an extra hand pop out and it took a little while before I could find it again.

Overall pleased with the packaging. It is collector driven, but does not feel as bulky or unnecessarily too big as a Hasbro Marvel Legends or Star Wars Black figure. My only confusion is what can be determined as the front. If I ever want to display it, I wouldn’t know which side to place it on. Of course you want the figured displayed, but that silver metallic embossed cover makes for some good displaying as well… 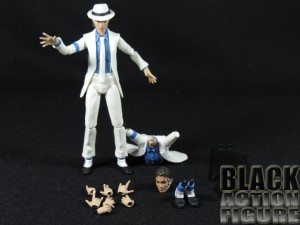 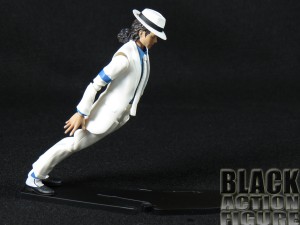 This figure comes with an assortment of different accessories. Along with his removable hat you get 7 extra hands in different poses. You also get a different Michael Jackson head with a “smiling” Michael. There is an extra body that allows the figure to do poses with his arms out and his coat flared out. There are also a set of feet that attach to the “shadow” stand and allow the figure to recreate the famous Smooth Criminal Lean.

While there are plenty of accessories, not all of the accessories switch out easily. The head, body and feet easily come out, but when working with the hands you have to be extremely careful. While I did not break the wrist joint, I had to throw up a prayer that it wouldn’t break every time I switched out a different hand. For my final display, I will just pick one set of hands and the rest are going to go back in the box and back in storage. 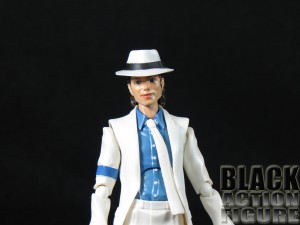 I think Bandai Japan did a pretty good likeness of Michael Jackson. There is something in the end though that makes the figure a little plastic…but truth be told, wasn’t Michael a little plastic in real life? (okay, a lot of plastic)

Even though the features are simplistic, they are put together well. The hair (with the removable pony tail) is also well done and is a good representation of Michael’s jheri curl-turned-permed hair.

The smooth criminal outfit is exact down to the tape (or bandaids) around his fingers. It is a good representation of his Smooth Criminal appearance. 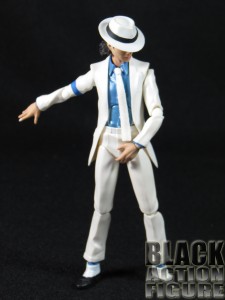 One thing I would like to note is how well this sculpt allows me to pose the figure. No matter how I pose the figure, it comes off looking like one of Michael’s dance moves. There are some poses that I have done on purpose (like the infamous crotch grab on the right) but there are poses where I just moved him around and it just made him look like he was dancing.

The hat is a big part of it. I was able to hide half of his face or prop it up so that you can see him smiling underneath.

From what I can tell, the paint apps are really good (disclaimer, I’m not a huge “this paint is a half a millimeter off” type of guy, but I can tell when it is done right). 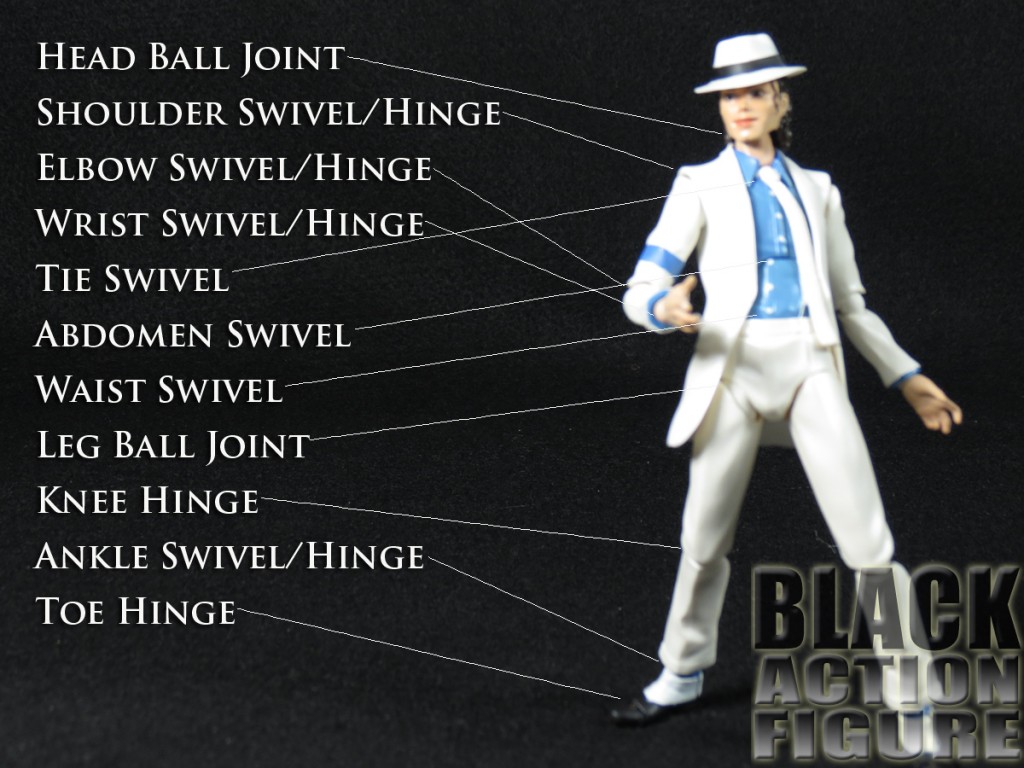 [Sorry for the crappy picture, not sure what happened]

Being my first S.H. Figuarts action figure, I already expected the articulation to be excellent. I’ve heard many reviews of other figures and almost knew what to expect. But let me say this…if you are an articulation snob and you want to pose your action figure and for it to keep its pose while standing a certain way, let me tell you that Bandai SH Figuarts is the way to go. (I can’t wait for the S.H. Figuarts Darth Vader to come out)

This figure has easily 26+ points of articulation that I can count, but I’m pretty sure I’m missing some and it could easily be well over 30. What makes this figure so unique is the ball joint/hinge system this figure uses at the shoulders, elbows, knees, and head. It just makes this figure so versatile and easy to pose and stand. Like I said in the previous section, it is really hard to not put this figure in a great pose.  Even the tie is articulated!

One thing to note, the leg where it is attached to the pelvis area does not out very far. As soon as I do, the leg pops out of its ball joint. Kind of a huge minus, but all it means to me is that this figure won’t be doing the splits anytime soon (which surprisingly is not very Michael-like anyway).

Other than that, this figure will not disappoint most articulation-freaks. 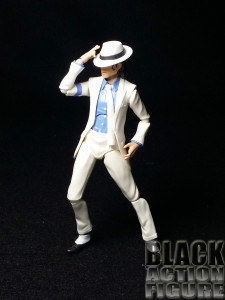 For my first S.H. Figuarts figure, I think I chose a good one to start with. Most of the Figuarts figures I’ve seen on the internet are mostly Power Rangers or some other Japanese franchise…or Iron Man related (stay tuned for the upcoming Iron Patriot review).

My main concern is that I really don’t know the difference between S.H. Figuarts figures, Revoltech figures, or Miracle Action Figure Ex (MAFEX) figures. I’ve heard great things about all of them and look forward to comparing the different types as more options come to our shores since most of these are Japanese/Asian franchises. (I guess I have to take a trip to Japan where I’m sure some of these would be cheaper).

At any rate, this is a great option for those who can’t afford the 12″ Hot Toys Michael Jackson sold mostly now on eBay…and only around 10-15% of a Hot Toys price.