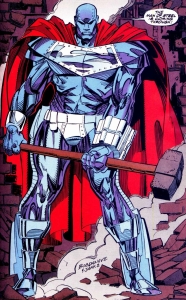 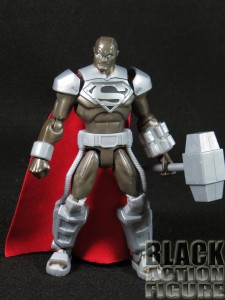 Last but definitely not least at our look at the DC Total Heroes Universe is the Superman-wannabe himself, Steel. The character himself is probably somewhere near the bottom of my Top 10 DC characters that I like, but he’s a decent character with a decent powerset. He almost reminds me of Cyborg in a way, being another Black character that relies on technological equipment and armor (see also “Hardware”). But in my mind, John Henry Irons/Steel is more of a “Tony Stark/Iron Man” type of guy for the DC Universe.

The Steel action figure is part of the last Total Universe wave for 2014 (along with Hawkman). I was actually kind of surprised to see Steel in the lineup since he hasn’t been very active in the comics lately…well at least for me. But don’t listen to me, I’m over a year behind (roughly 14 months). For all I know, DC could have given him his own book by now…and probably have subsequently cancelled it.

At any rate, lets take a look at Mattel’s offering of Steel in the Total Heroes action figure lineup. 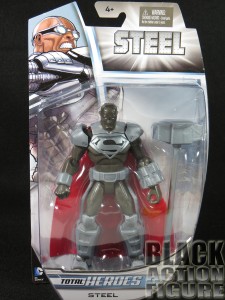 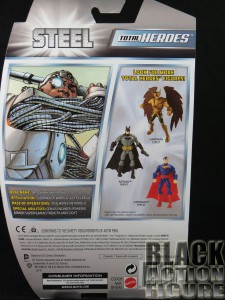 My last three reviews were all Total Heroes Ultra figure reviews so I almost forgot what the regular packaging for the Total Heroes line looked like.

And here it is, pretty basic. Blister bubble and card. While I like the front of the card, it suffers from what most of this line suffers from – inaccurate representations of the drawn character on the front and back. What they are showing is some iteration of Steel probably pulled from some DC archive. BUT it looks nothing like the figure in the blister window!

So you’re telling me that no other image exists that Mattel could have used to show off the actual figure that comes in the package? Give me a sec, I’m Googling “DC universe Steel”. Oh snap! Look how many pictures I get that look like the figure that they’re selling us! Some of them might not be a one-on-one exact shot, but I can tell you this, they are a lot closer than what Mattel is trying to seell us on the front of that packaging.

A very disappointing miss on Mattel’s part that will definitely affect the scoring. 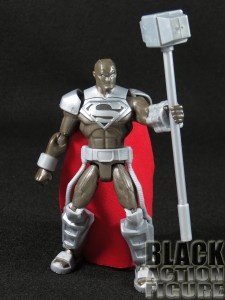 Remember kids, this is not an “Ultra” figure, so we will get the bare minimum in accessories…which lucky for us includes Steel’s hammer. In comparison, Hawkman did not come with ANY weapons, so I will definitely settle for one.

I’m not sure there would be enough with Steel to make him an “Ultra” figure anyway. He could possibly come with an extra un-helmeted head, some extra hands and…that’s about it. There’s not much to him.

So of course, the scoring is going by the fact that he is a basic figure coming in the basic Total Heroes line and did manage to include the most significant (if not the only) weapon in his repertoire.

Sculpt/Likeness
I did something different that I did not do for my other “Total Heroes” reviews. I added a comic picture of Steel (shown at the top) to show how close Mattel actually got at Steel looking more like an original figure rather than a kit-bash from their standard set of parts.

While the shoulder armor is the same or similar to other figures (Cyborg, Luthor, etc.) there are a lot of new pieces to this figure. The “S” shield chestplate is definitely new. The molded different sized armbands on the figure’s wrists are new. The bottom legs/boots are brand new as well. I can tell that all of the new pieces were specifically made for this figure to make him as accurate to his comic appearance (again, shown above) as possible.

Now Mattel may move on and reuse the hell out of all of these new pieces on future figures, but a strong handclap on all of the new tooling. 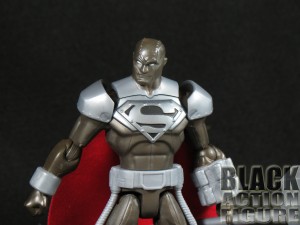 I would also like to take note that I really love the cloth cape. I haven’t reviewed a Total Heroes figure on here yet that had the cloth cape, but I have the Batman, Superman, and Bizarro figures that also have the cloth cape and to me it’s so much better. They did cheap out and leave the logos off of the back of the cape, but it is a small sacrifice to actually work with the cloth cape.

Taking a closer look at the figure’s face, I can see the detailing they put on the head sculpt. You can see the rivets in the head and a distinct wrinkling in the sculpt. And even with the broad nose, you can almost tell that this character is distinctly Black (if you didn’t know otherwise).

It looks like there is very little paint going on here. Instead, most of the pieces look to be molded colored plastic, either a dark metallic gray or the lighter silver pieces. This solves the crappy paint apps that I saw on figures like Firestorm and I believe it was a smart move on Mattel’s part.

All in all, a solid figure in both sculpt and likeness. 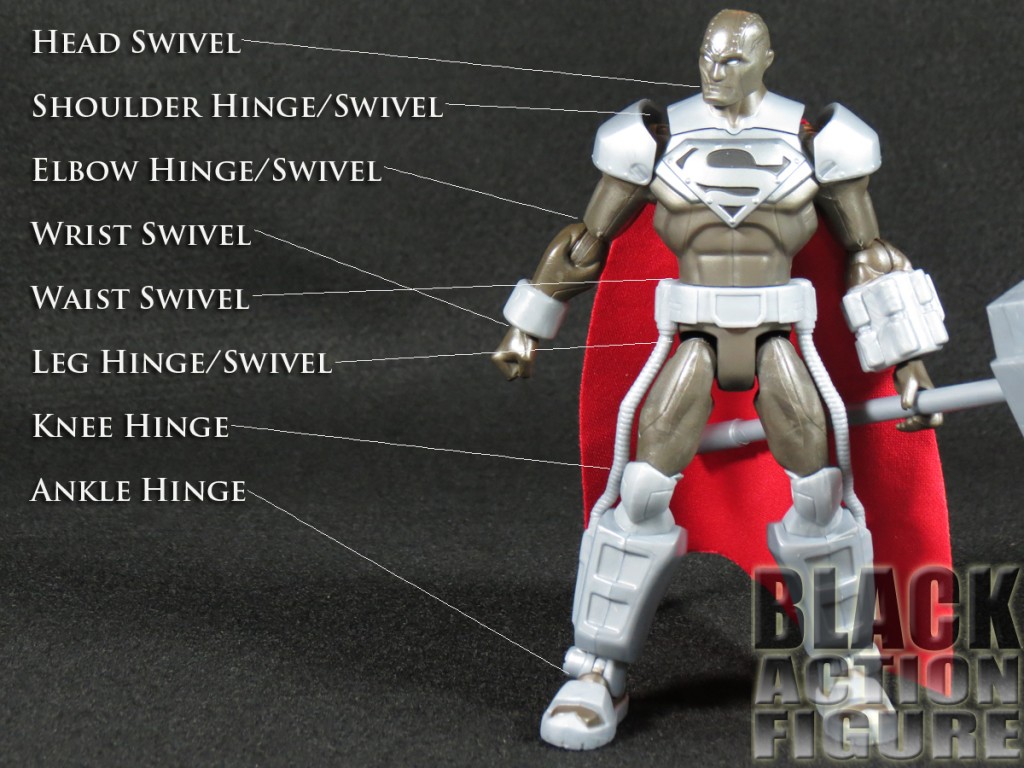 The Steel figure has the same basic articulation as the other Total Heroes line, so we are looking at about 20+ points of articulation.

A couple of things to note. For one, the head is like Cyborg’s and will only swivel on its joint instead of looking up and down. Which is disappointing because he is another flying character.

The other thing is that even though there is clearly a hinge on the figure’s left elbow, the figure’s arm will not bend for anything. I also feel like if I apply too much pressure, the arm can snap right off. I have yet had to face this issue with any of my Total Heroes action figures and wonder where the defect lies…with the figure or with me. For now I am content with him having a straight arm but he will lose a couple of points for this. 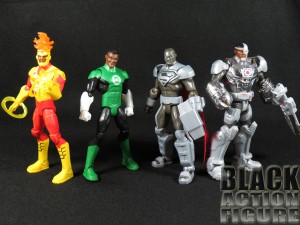 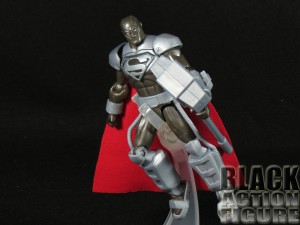 Well this is it so far for my DC Total Heroes week! And that really took less time than I thought it would. I think that’s all because of my holiday schedule allowing me some time to actually get these reviews done.

I definitely love the Steel action figure, but out of all of them, I would say Black Manta was my favorite. And then after that it would be Cyborg. The other three (Steel, Firestorm, John Stewart) may be a tie.

Check out my sidebar poll on the front page and get your voices heard! Let me know who you think should be the next Black DC Total Heroes character. Personally, I would love to Vixen, but at this point, I think Black Lightning may be a better bet than her.  And of course, if you liked this review (or even if you didn’t like it) be sure to check out the other reviews on my site.