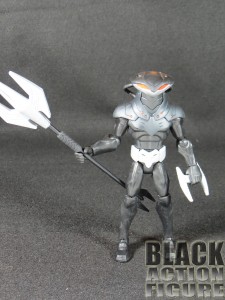 I have a confession. As much disdain as I have for Mattel and their handling of the DC license, I have to say against my better judgment that they have been doing a really nice job on the DC Total Heroes line. Yes, it is highly-stylized, and yes it is more or less tons of kit-bashing. But damn it if I haven’t gotten some real good figures from this line lately.

With that said, I’m making this week (or the next two weeks, schedule pending of course) DC Total Heroes week! We already have the John Stewart Green Lantern done. Along with Black Manta, we have Firestorm, Cyborg (yes, another Cyborg), and last but not least, Steel – from the latest wave of DC Total Heroes. So kick back, relax, and take a look at some really great figures.

Packaging
Because Mattel didn’t think that Black Manta would sell well in retail, they decided to make him an exclusive on their MattyCollector.com website. Now let me just rant for a few seconds. Why would they create a line of action figures that are apparently aimed at boys to actually be played with, then make some of the figures exclusively available on an Adult Collectors’ website? Does Mattel really think that kids would not want a Black Manta or a Firestorm? Do they really consider Steel more retail ready than Cyborg (their San Diego Comic Con exclusive)? That shit right there really doesn’t make sense to me. I’ve been trying to think it over but come up with nothing. 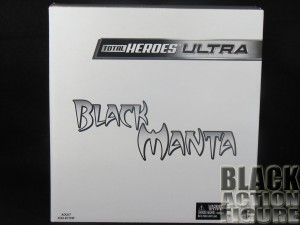 Anyway, like most Mattel exclusives, Black Manta is shipped in a plain white box (for “mint” protection of the figure inside). Once you take the figure on the card and bubble out of the package, that’s when the real fun begins! 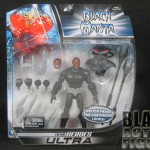 Out of the box, you get a pretty nice carded figure and just from first glance you can tell that this figure comes with tons of accessories. The front of the card has an excellent illustration on the upper left of the card. What I did not know before owning this figure was that Black Manta has his own look to his name…which is prominently found on the white box and the upper left hand corner of the card.  We also get “Total Heroes Ultra” distinguishing itself from the plain-jane “Total Heroes” you find in the store. 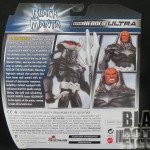 On the back of the card, you get your obligatory bio-blurb, and then three different shots of Black Manta posing with both of his included heads and also one with his helmet on. Very cool, and right to the point. The only thing that is missing would be the “upcoming figures” most action figures have. I guess that maybe Mattel didn’t think there would be any upcoming figures.

All in all, well done packaging and one that deserves the premium treatment since in most cases people are paying a premium price for it. 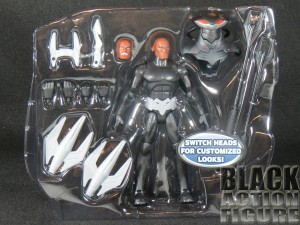 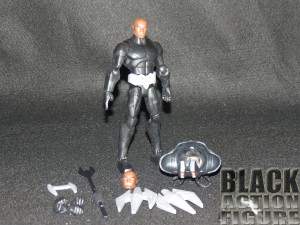 Yes, still getting what we are paying for! Again, out of the package, you can tell that this figure comes with a bevy of different accessories.

Taking the accessories out of the plastic blister keeps the same feel and scope of looking at them within the package.

You get two more sets of hands, the punching set of fists and the weapon fists.  You get his two weapons which attach to the back of the figure. You get two spear/tridents.  And you also get two different heads, slightly annoyed Black Manta, and scarface-snarl Black Manta. This figure also comes with a helmet that fits right over the figure’s head (which makes me like this figure even more).

I only have a couple of gripes with the accessories. One, the tridents fit awkwardly in the figure’s hands. At no point was I able to do a really cool stance with this figure holding the tridents. And if you try to force the tridents into the hands too much, the tridents themselves just fall apart.

The accessories definitely make this figure. Seeing as this is a Total Heroes “Ultra” figure, the extra accessories make this a figure worth having. Most of the figures in this line come with only one or no accessories. 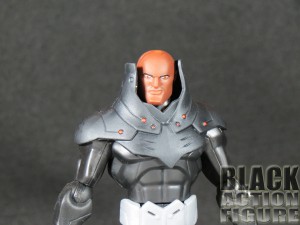 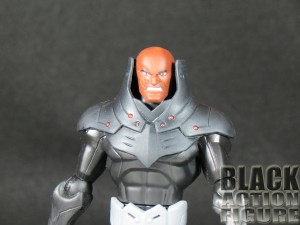 Both of the included heads are done well. To note, this is the first and only Black Manta figure that I own where the helmet comes off to reveal the man himself inside. And then at that, we not only get one head, we get two separate heads, one with a calm, menacing glare to him and one where he is scarred (most likely by Aquaman) and angry as hell about it. Each head sculpt is done surprisingly well for this stylized version of the character.

Add in the helmet and there is no doubt that this is the Black Manta that we’ve grown up with over the years. Thankfully, he’s not wearing the skin-tight wetsuit from the 1970’s, but has a suit of armor suitable for his underwater battles.

Let me reiterate that most of the Total Heroes line is a big pot of kit-bashing. Meaning most of the figures share the same base body, arms, and legs. But it’s what Mattel has done with those pieces that makes this so impressive.

Again, only a gripe or two. When I first took the heads out of the package, there was a noticeable seam going across the middle of the head. Luckily, when the head is on the figure, it becomes less noticeable, but I still know it’s there. Also, if I did have one other complaint about this whole line is that the paint on the figures is so basic (which of course, allows these figures to be cheaper). Very paint by the number and does not have the dramatic shadowing or paint washes that other figures have.

In terms of likeness, although this set of figures borrows heavily from the DC New 52 design, I’m not quite sure this Black Manta is the same as his New 52 counterpart. Doing a comparison of them side by side (using the DC Collectibles Black Manta reviewed here) I immediately notice the differences in the design. While of course not a deal breaker, it just goes to show how differently styled this line of figures tends to be and is in a league of its own. 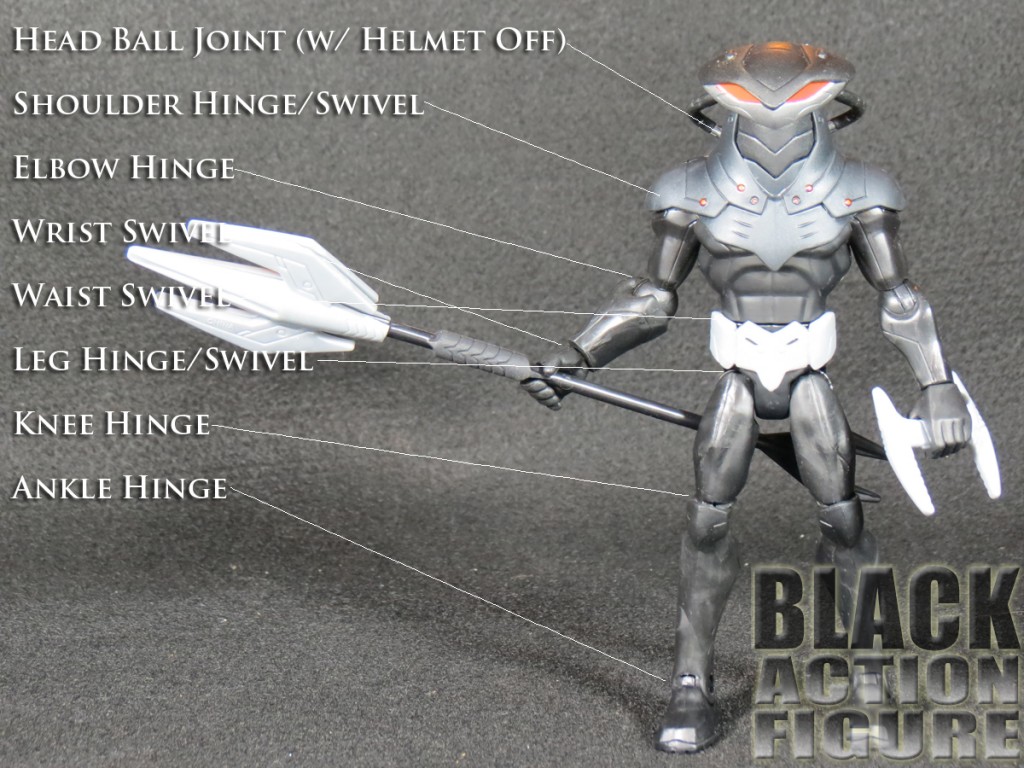 While nothing to write home about, this figure does have roughly 18+ points of articulation. Not bad for Mattel’s low-end figure line and is about the norm for all Total Heroes figures.

Areas where his articulation is hampered include his head while the figure’s helmet is on (the helmet does not move once on) and limited articulation at the shoulders where the body armor harness restricts full range of motion.

EDIT: I missed a “Swivel” in the elbow…bringing the total points of articulation to about 20. I’ll change the score slightly to reflect that. 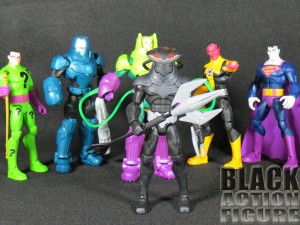 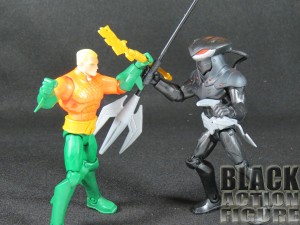 I really didn’t think I would like this Total Heroes line of figures, but it ended up growing on me real quick. This figure only solidified how great this line is to me. Of course where there is a positive, there is usually a negative. So far since this line is marketed mainly to boys, there are no women in this series. No Wonder Woman. No Cheetah. No Vixen. No one. I really think this line could use more of the female influence.

Beyond that, I have to say that I really, really, really like this figure. Not only because it is a well known Black Super-Villain (I know, I shouldn’t celebrate a super-villain , but there are so few of them), but because it reveals that Black Manta is…well, Black.  While those who watched the Young Justice animated series on Cartoon Network already know this, I still feel there is a population out there that this little fact has to be made known. He can hold his own up there with Luthor, Joker and Sinestro.