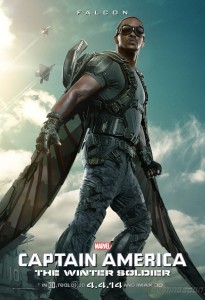 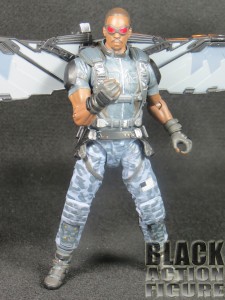 Marvel not surprisingly has had a really good year. They had Guardians of the Galaxy, which absolutely has to be the surprise hit of the summer…but they started with a little movie in the spring called Captain America: The Winter Soldier. Unlike the disappoint that was Iron Man 3, Captain America was able to sustain and even amp up the hype built up by the Avengers. This movie managed to do a lot of things: be a political thriller, be a way better sequel to the original, and make a very mediocre television show (Agents of Shield) surprisingly a million times more interesting.

They also managed to do one more thing…introduce the next major, Black Marvel superhero, the often underrated but highly effective Falcon. In fact, this is probably the first time I’ve seen so many kids (and people in general) excited about the Falcon. To me, he made the movie better than it would have been. Yeah, yeah, there was the Black Widow, but we’ve already seen her in Iron Man 2 and the Avengers. It was good that they brought in some new blood.

Needless to say, I had to get my hands on the action figure. Knowing that the Hot Toys version was coming but wouldn’t be out for at least another year, I patiently awaited for the seemingly inevitable Hasbro Marvel Legends version. But Hasbro’s Marvel Legends Infinite line went through two waves of action figures, and yet no Falcon. And the disappointing-looking 3.75″ version never made its way to retail shelves since retailers stocked up so heavily on the first wave of figures that manage not to sell well (sometimes I wish I was a buyer). Luckily, Diamond Select Toys announced that they were adding the movie-version Falcon to their Marvel Select line of figures. The initial pictures flooding the internet had me hopeful and now I have it in my hands…did this figure live up to my expectations? 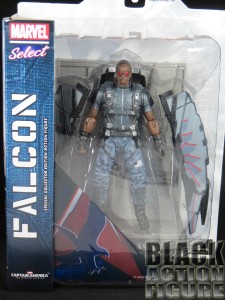 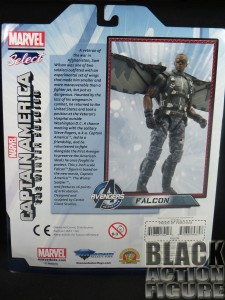 Like all of Marvel Select packaging, you get an oversized blister pack that is at least triple the size of the actual figure. I like the fact that Marvel Select can be stored like books with the left side facing out…but I’m also disappointed that they never put a picture of the figure on that side so even if you arrange all of your Marvel Select like some deranged action figure library, you will never know what the figure looks like until you pull the figure out and look at it…leaving this wide open for some of your more obnoxious friends to come over and manhandle your mint-in-box action figure.

My solution? Rip that figure out. Although…stop…wait. This is a Marvel Select figure, so please have a pair of bolt cutters or a very sharp utility knife handy. These figures usually come with metal-lined twisty-ties galore. And this figure did not disappoint. Once I had the figure out of the blister bubble, I had at least 7-8 twisty-ties to either cut off or manipulate. I really feel bad for the little Chinese-hands that had to twist those ties into shape. I get arthritis even thinking about it. Thank you little Chinese-handed person. Screw you DST for making them do that. Please consider making your packaging frustration-free. It will save you a lot of money and consumers from a lot of frustration, time, and bodily injury.

What’s interesting is that this figure is packaged with the wings to the side, but it almost looks like the wings are bound to his arms around the shoulders. Nope, this is not the case. That’s just how they packaged it folks. Also, its funny how the background accessory is so loose in the blister but the figure is all tied up like it was made with 10karat gold.

Anyway, be good to your figure and free it! Just beware, I never try and save even the card of my Marvel Select figures, so be prepared to toss the packaging after you remove all of the effects (figure, accessories, etc.)! 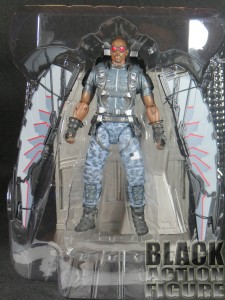 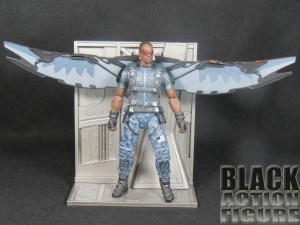 Marvel Select figures rarely feel skimpy on accessories. If you don’t believe me, check out their Venom figure. Marvel Select almost has it right with the Falcon figure.

Included are a pair of detachable wings, and a base. Noticeably absent for those who have seen the movie is a pair of semi-automatic handguns that fly out of nowhere from some wrist mechanism. He uses these as his primary weapons…unfortunately they did not include any weapons with the figure. (I guess we’ll have to wait on the Hot Toys figure before we get a Falcon with guns).

The wings are great and definitely an approvement over the 3.75″ figure (which I did NOT get by the way). At least they now look like the wings in the movie. I thought I would be more excited, but they just plug in and pull out. Nothing exciting about that.

Sculpt/Likeness
In this category especially for movie figures, I would like my figure to look like the actor, and to Marvel Select’s credit they usually do well. And they kind of got it right. 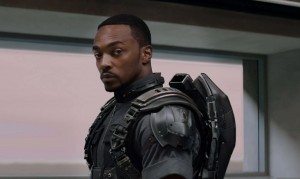 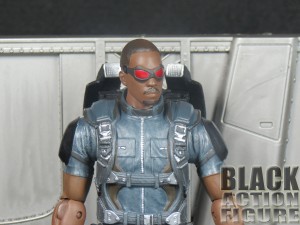 If I had a better profile shot, I can almost see it. But looking at both the actor and the figure side by side, the figure turns out to be a distorted version of him. It’s not quite right. It’s definitely a Black man, but not quite Anthony Mackie. 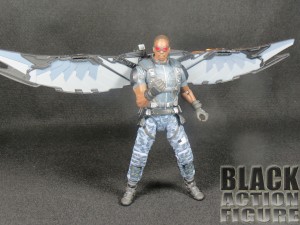 Other than the likeness, I do like the accuracy of the costume. But even then, there is something distorted about it. Looking at the pictures above it almost feels that the backpack on the figure is way bigger than the backpack in the movie.

Everything else seems fairly accurate. There is even an American Flag emblazoned on to Falcon’s left leg…a detail I missed on the actor in the movie. I’ll have to look for it next time I watch the film.

Another thing that bothers me is that the goggles don’t come off. And maybe that’s what is distorting the figure. I wish the goggles would come off akin to the masks on the Iron Men figures coming off revealing the character inside.

As you can probably tell, I was all gee’d up to like this figure and I just can’t. It’s just okay to me. It definitely would have to be in my collection but then again, didn’t necessarily have to be.  Makes sense? If so, can someone explain it back to me? 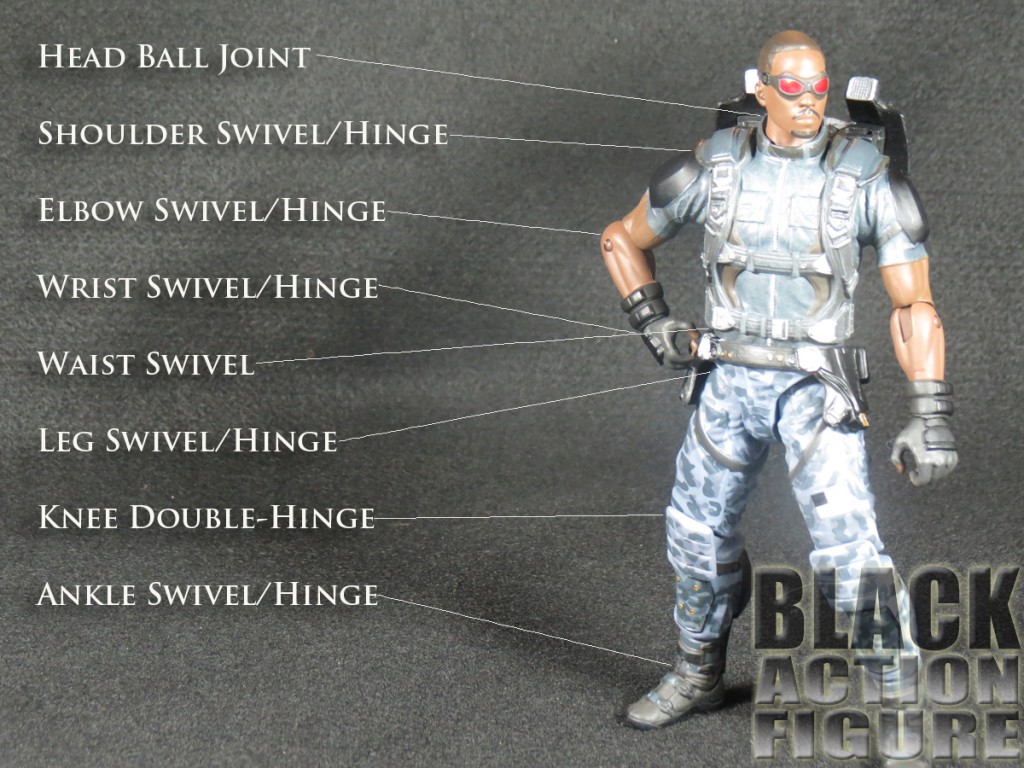 I have to say, I’ve been pretty impressed with Marvel Select articulation lately.  They went from the low teens to the mid-twenty points of articulation almost seamlessly and without lack of detail.

Falcon comes with 26 points of articulation, although not all points work as well as the others. Some noticeable points to check out is the ankle…while there is visibly a hinge there (to point his toe down), it is seriously hampered by a part of his uniform on the back cuff of his leg rendering the hinge baasically useless. And I was also spinning his wrist to find the correct position on where it bends on the hinge. Also, I believe every action figure that is based on someone who flies should be able to have the ability to push back the head like it was looking up for some dynamic posing. None of that here.

Definitely some nice articulation all around, but still some work to be done on this and other figures.

Articulation Score: 8 out of 10 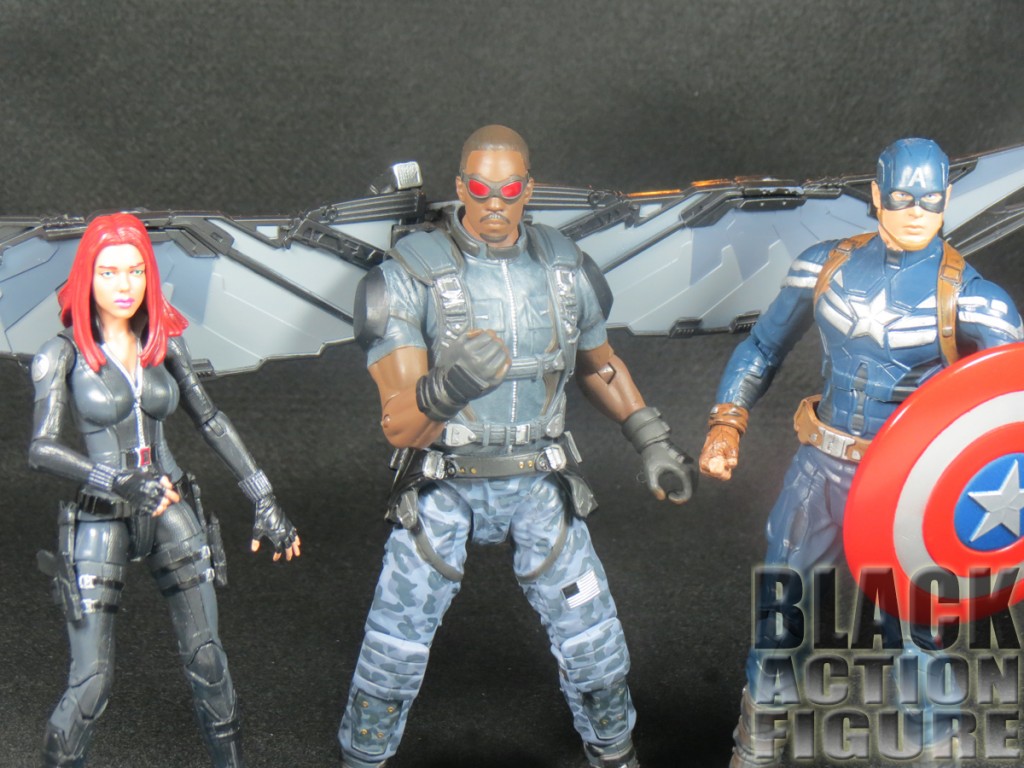 I saw this movie once in the theaters.  I even own it now digitally. I think it is a great movie and it deserved some great figures. Hasbro Marvel legends put out some decent movie figures, but it left me wanting more. Marvel Select has put out a Captain America and a Falcon, but I still want more. Guess it’s up to Hot Toys to save the day.