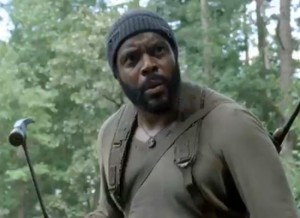 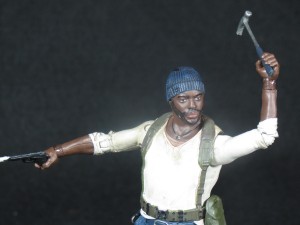 How quickly a week goes by.  I had planned for a whole week of The Walking Dead goodness (including a review of the infamous and beloved comic book) getting ready for the Season Premiere. I still plan on doing all that stuff, but instead of the week leading up to the season premiere, let’s just now dub this next “The Walking Dead Week”!

Next up is Tyreese, or how my coworker so eloquently put it, the “ex-con from the Wire”. Last season, we left Tyreese with (spoiler) three little white girls in his care…and the fun times just keep rolling!

The last time we looked at a figure in this series it was the Michonne action figure…and I liked it so much, I made it part of the site masthead…(although I think that’s getting kind of played out and it’s time for another one)…but I digress.  Let’s get into taking a look at The Walking Dead’s Tyreese. 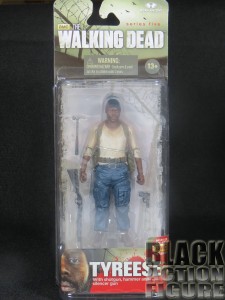 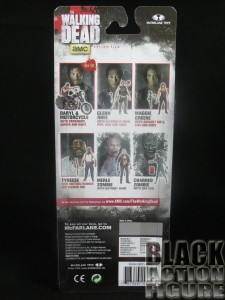 I had to read back at my Michonne and Pets review to see if I felt the same way about the packaging then as I do now…and surprisingly, I do. The packaging is simple, minimalistic, but yet still so effective. I think other companies need to take note…usually people collect the figures inside and could care less about big packaging that may look good on a wall.

I saw a Walgreens display the other day that featured The Walking Dead figures, Halo figures, and Assassin’s Creed figures all arranged neatly in a 4×4 arrangement.  The display drew me to it even though I either already had the characters I wanted from each of those lines. I guess it’s because the focus of the packaging is for the figure inside, and there’s not a lot of hoopla on the card itself.

The front is a basic “AMC The Walking Dead” card, featuring the TV series figures (as opposed to the Comic Book series figures). We get the figure in the blister with the figure’s name and included accessories along the bottom.

Flipping the card over, we get to see a listing of all of the figures from that wave including Daryl, Glenn, and Maggie (note to self, I may have to do a review on the Glenn figure).

That’s about it. A basic card that just works!

Another thing that I like about this series is that McFarlane Toys really likes to include accessories with their figures, which is always a plus. The Tyreese figure comes with a hammer, a shotgun, and a pistol with a makeshift silencer. All weapons needed in the battle against the undead (just make sure to always aim for the head).

The only gripe I have about the accessories are how it fits in the figure’s hands. The hammer seems to do okay, especially in his left hand. I was able to get the pistol into his right hand, but it was an awkward and loose fit. The shotgun to me was a lost cause. I tried to just get this figure to hold the shotgun in any way possible and I just gave up out of frustration.

So an “A” for the included accessories, but a “D” for making it fit in the figure’s hands. I would say that would average out to a strong “C+”. 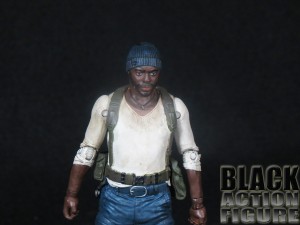 For a 5 inch figure, I think the likeness is good. Not great, just good. When I first saw the figure in the package, I thought, “Wow, this really is Cutty from The Wire!” (Yes, I love The Wire as much as I love The Walking Dead).

Let’s start with the basics…the outfit is on point. Knit hat? Check. Suspenders/belt with side pouches? Check. We even get a “YinYang” necklace that I never noticed he was wearing in the show. It took it being on the figure for me to go back and look for it around his neck on the show. Alright McFarlane, you get points for that.

The basics are there in the facial sculpt as well. So what’s the biggest difference between the figure and the actual actor (Chad Coleman) who plays Tyreese? Coleman has always had expressive eyes that could portray so many emotions…fear, anger, betrayal, joy, calm. This figure…has dead eyes (no pun intended). It looks as emotionless as the Walkers they kill. I mean, even in the show when he’s killing…errr…re-killing the Walkers, his eyes go big as he’s knocking a hole in their head with his hammer. This figure just doesn’t give the same feel to the character on the show.

So props on getting the character technically correct…and a minus on such a bland expression on his face. 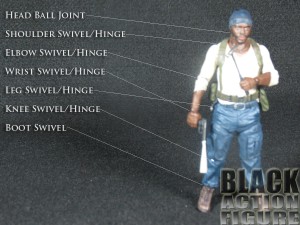 Definitely basic in its articulation, but better than some of the figures in the same or similar height range that I have been reviewing. The one main thing that would make this score a little low is that I find it incredibly hard to stand and/or pose this figure. I took fewer pictures at a lower quality just to finish up the shoot and looking back at some of these shots, it definitely shows.

Some final Thoughts…
I like the McFarlane Toys version just okay, but I really can’t wait until someone does a 12″ version of both the Tyreese character and also of Michonne. That’s where I see my money going towards someday. So nothing more to say…it’s 7pm central on a Sunday night and the show should be coming on in another couple of hours. I hope everything works out for our group and please don’t let Tyreese die anytime soon on the show. 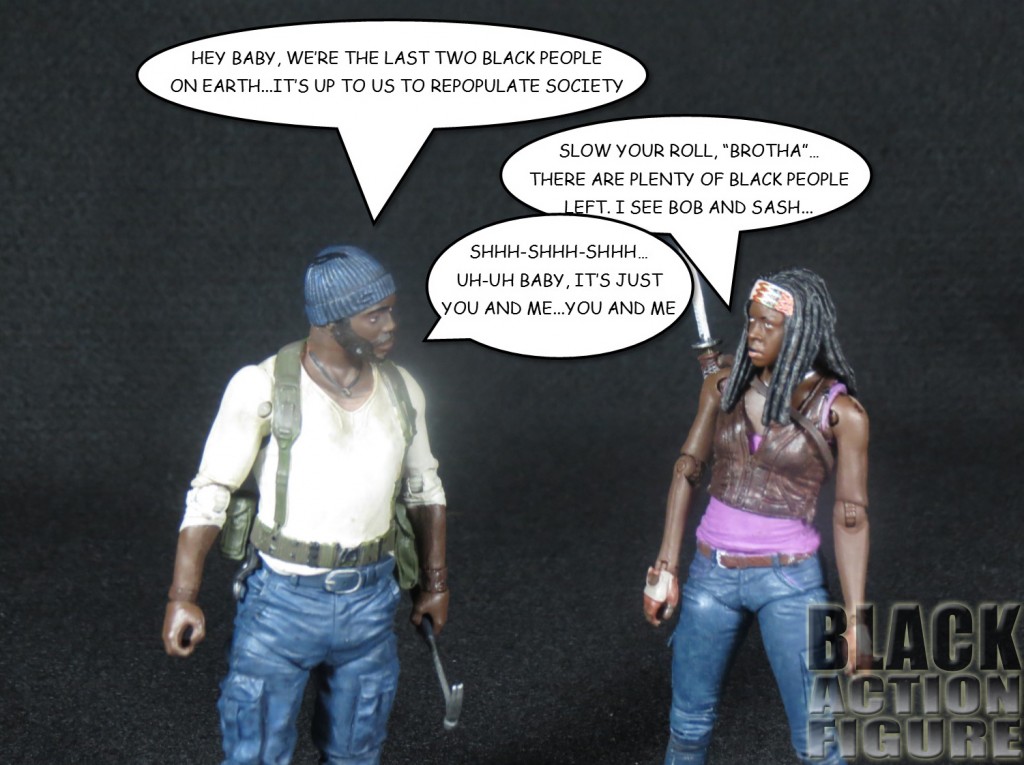