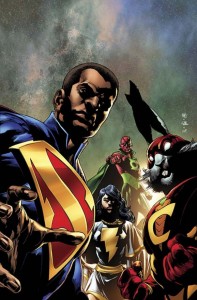 Remember a year and a half ago when I talked about the comic book Multiversity, a book that features the Black Superman of Earth 23? Looks like it’s almost here…(finally).  Looks to be a limited series with the potential to be a full blown series later on. Let’s hope DC Collectibles picks up on these characters – I would love to be reviewing the Black Superman action figure.

I also like that they kept the 52 alternate universes first established in the limited series aptly named, 52.  In it through a series of events, the DC Universe goes from being infinite to a series of 52 parallel universes. Since the Vertigo universe and the Wildstorm universe were two of the original 52 universes, and since they were joined with the current DC Universe to form the “New 52” universe, I wonder which parallel universes were created to fill that hole. Now if you understood that last statement, you are as deeply entrenched in the DC Universe as I am, whether that’s a good thing or bad thing.