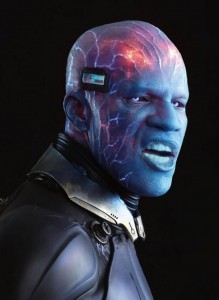 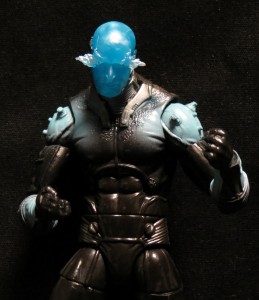 One week into Black History Month and I don’t have a review up? Blasphemous…let’s take care of that right now. Next up is The Amazing Spider-Man 2 Marvel Legends Infinite Series Electro action figure.  *Deep Breath*  I would hate to have to say that anymore than I have to. If you have been living under a hole somewhere, Electro will be portrayed by Oscar award winning actor, Jamie Foxx.

This time around, Hasbro has revamped their Marvel Legends line by trying to make it more of a premium experience like their Star Wars Black 6 inch figures…including an additional $5 markup from $15 to $20 a figure (I remember when Marvel Legends first came out they were $7.99 MSRP).  The trade offs are there (and we will discuss them later), but this move has definitely boost this line into the “Adult Collectibles” category.

Hasbro has started us off with two series of figures this year.  One for the new Captain America movie, and one for the Amazing Spider-Man 2 movie (which this one is from). From what I’ve seen, it has definitely been a great start. Collectors everywhere are scrambling to get their pick of these latest figures. So how do they stack up to previous Marvel Legends offerings? 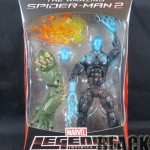 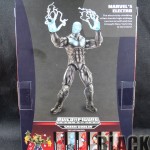 The packaging is the first difference you notice when picking up these figures. Gone is the wild, comic book feeling blister packaging that is often obliterated by taking the figure out (although I usually save the card backs). Now a la Star Wars Black, we get adult, dare I say “sophisticated,” looking packaging. And just like Star Wars Black, you are able to carefully open up the packaging for access to the figure and place it back with little to no damage to the packaging itself.

The front of the box has a display window prominently showing off the figure and other accessories (along with the Build-A-Figure piece). We get the movie’s title along the top and the Marvel Legends logo and character name on the bottom. Very simple yet very elegant in execution.

The back of the box is equally impressive to me. Again, gone is the comic art found on the previous two years of packaging. Instead what we get is a photographic shot of the figure itself along with a bio-blurb of the character. The bottom portion of the back of the box features a picture of the Build-A-Figure pieced together and the other figures that are available or will be available in this line. 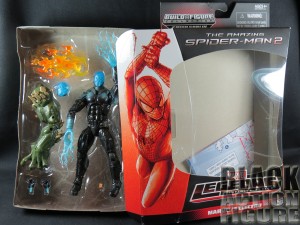 As mentioned before, the nice part about the packaging is the ability to carefully open the box from either the left or the right (carefully cutting the one piece of tape keeping the box close) and just slide the figure right out of the packaging. The figure and accessories are nestled within the molded plastic shell and (get this) can be removed without having to undo a twisty tie!

I was pretty impressed when DC Collectibles upped their game. I was equally impressed when the Star Wars Black line came out. Well, this is a similar redo to cater to the collectors. Even mint-in-box collectors could open it up and close it back, although I doubt that they would.  The figure itself is wedged firmly into the plastic and sometimes a piece of tape keeps the accessory from moving all around. 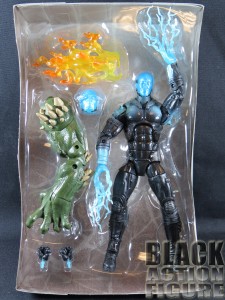 Thank goodness that Hasbro was smart enough to try and include significant accessories along with the figure since they would like to charge us 25% more than what we’re used to paying. This Electro figure comes with an extra set of non-electrified hands and and extra electrified head. So now we can mix and match at our pleasure (take that Iron Man Assemblers!). Seriously though, this allows me to choose how to display my figure and I chose for my display one normal and one electrified hand along with the electrified head. 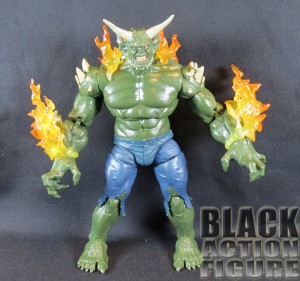 This figure also comes with two Build-A-Figure pieces which I don’t really consider an accessory but is worth mentioning. Included in the packaging is the left arm along with flames to attach to that arm for the Ultimate Green Goblin figure. I actually have all the necessary figures so by opening and reviewing this figure, I was also able to complete my Build a figure.

In afterthought, I wish there was maybe another set of hands or some other accessory, but what we got seems to be good. 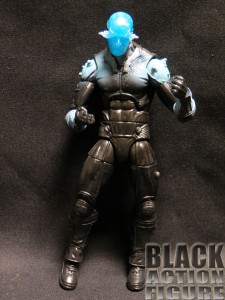 Okay with this category, I’m going to be very opinionated with this figure. It’s because this figure does not look like Jamie Foxx. At all. Outside of the movie-correct costume and detailing, the facial sculpt is not of Jamie Foxx.  Now let’s take it one more step: this figure does not look like a Black man at all! While some or even most of us comic book fans are coming into the realization that Jamie Foxx, a Black man, has taken the role of a traditionally White character (like Sam Jackson as Nick Fury), others deny that it should be done. People have fought back on it…think Idris Elba as Heimdall in the Thor movies. To me, this is a huge slap to the face of Black actors everywhere. Even though Hasbro knew that Jamie Foxx was going to do the role, they still did not use his likeness on this figure.

But who knows? Maybe Jamie Foxx took the role and did not sign over his likeness to the branding crew. I kind of doubt it because I own a Django figure which looks exactly like him. Maybe Hasbro didn’t think they could sell this figure without it looking like a generic man.  Who knows…I just know that this sculpt is not of Jamie Foxx and thus the score will be affected by it.

Now on a positive note, it is not a bad sculpt. This figure can easily be displayed in any of your collections. Maybe you want it in your Marvel movie collection. Or maybe you want to customize it a bit and put it in your Marvel comic collection. Whatever the case, this figure does present you with viable options. The detail itself is pretty good. I really like the sculpting of the electricity shooting out of his hands. It gives us one less accessory to pose with (aka clip on plastic electricity) and it flows with the sculpt itself. Very nice touch.

Other than the head, the rest of the body is a nice solid sculpt and I enjoy the electric blue paint job matched with the translucent blue head and hands to make the figure itself feel electric. Even though the original (comic version) Electro threw around yellow bolts of electricity, I’ll forgive the movie adaptation of the character and fully accept the electric blue and black makeover. 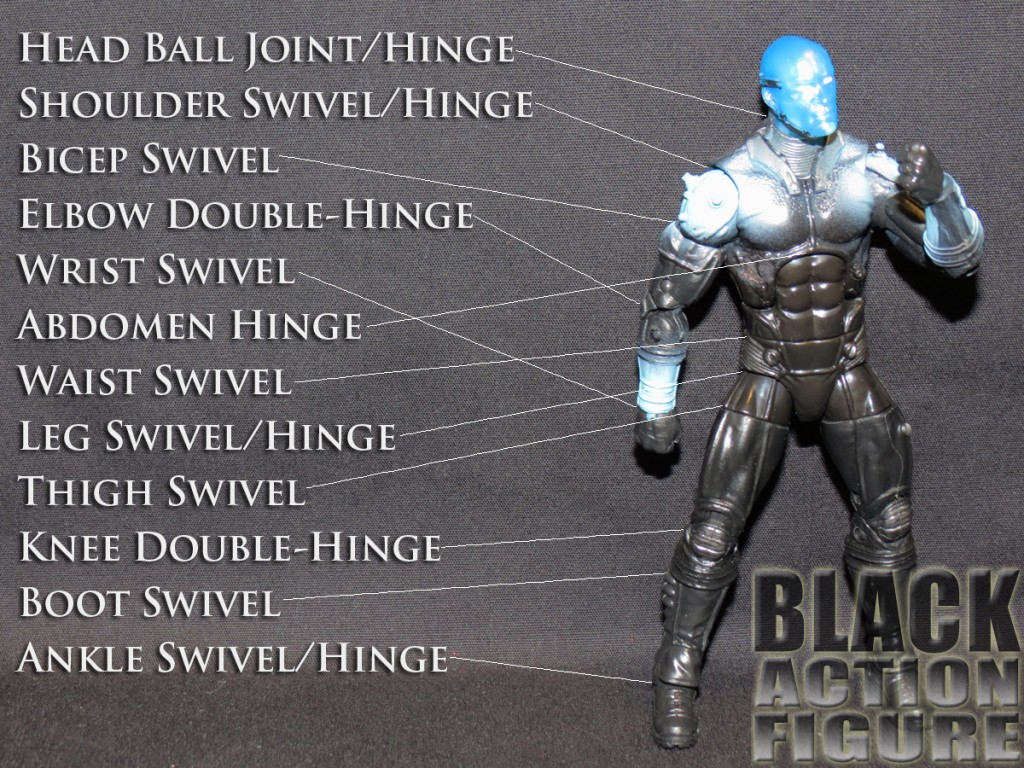 Some of the notable points include the ability to look up and down. Seriously. You would not believe how many figures that should have this feature do not have it so when you get one that does have it, shit, celebrate it. Makes action poses even more dramatic.

The double-hinge elbows and knees is always a plus along with the swivel/hinge ankles. This has started to be a standard with most current Marvel Legend figures and I definitely welcome it. One thing to note is that the bottom front of this figure’s pants do hamper some range of motion, which is always a negative. Other than that, this is a pretty solid, articulated figure. 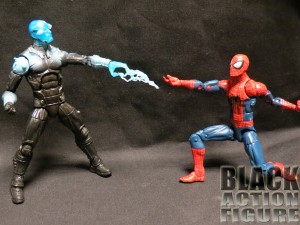 I’ve been around on many action figure sites and forums and the general consensus is that this is not a choice figure to pick up. Even with this negativity behind it, this figure is still one per case and everyone still loves collecting a bad guy. While I have not seen him on too many pegs in the store, he is still pretty easy to come by…case in point, click on the Amazon link below, he is currently ready to be yours for (now listed at $24.95 and will probably bounce around in price for awhile).

I went in not really caring about this figure either way and turning out to like it a little. While again, there is no likeness to be seen(I’ll have to wait on the Hot Toy for the dead on likeness), this is still a solid figure and I will be happy to display it in my Marvel movie section. With that in mind, I hope we get the other two villains some kind of way…a Marvel Select Movie Rhino would even work well with the Marvel Legends scale.

If you are even moderately interested in owning this figure, go ahead and pick it up. I don’t guarantee complete buyer satisfaction, but I think you won’t be disappointed…