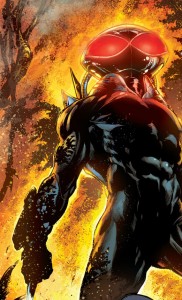 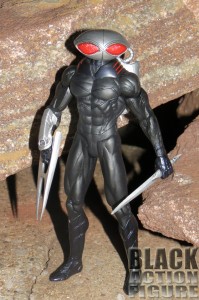 Raise your hand if you thought Black Manta was White…I mean, yes, his name is “Black” Manta, but I always thought of him as a White guy wearing a Black scuba suit. Wait, scratch that. 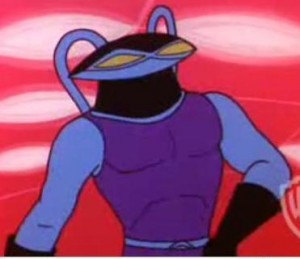 When I first watched the Superfriends back in the late 70s/early 80s, I had no clue that he was wearing a scuba suit. I thought he was just some weird, bug-eyed alien dude that could breathe underwater and was the arch-nemesis to Aquaman. I didn’t even know those things coming out of his head were breathing tubes. I just thought the dude had antennas on his head.

For whatever reasons, I don’t think Black Manta originally was going to be a Black Man. He came at a time when even the best villains were White. When I finally found out that Black Manta was…well, Black…I nodded to myself in acceptance and smiled at DC being bold enough to make a prominent villain Black. I mean, just like we need strong, Black heroes, we need equally strong, Black villains in the market.

I’ve watched Black Manta progress over the years turning himself into a real badass. I always thought of him as a little bit of a buffoon, always losing to Aquaman. But while Aquaman still wins his one-on-one battles with his water-logged “Lex Luther”, it’s been a close match and I wouldn’t even mind if Black Manta won every now and then just to keep Aquaman humble.

This New 52 redesign was one of the better ones for me out of all of the New 52 redesigns. With a slick jet-black wetsuit, silver armor and weapons, and glowing red eyes on his scuba helmet (the better to blast you with his eye lasers), this character’s look translated well into a menacing action figure. Let’s take a look… 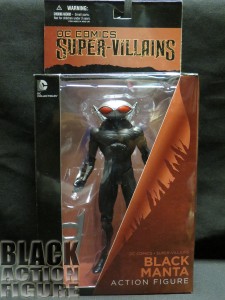 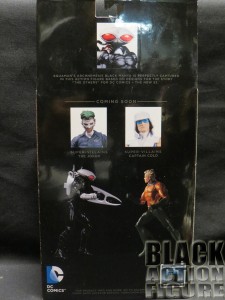 I’ve always enjoyed DC Collectibles packaging. I believe other collectors have as well. So much that I believe Hasbro will be copying them in their next wave of Marvel Legends in the “Display, Take Out, Put Back In, ReDisplay” model.

With this new “Super Villains” line of the New 52, we get a slight redesign of the packaging. It continues to keep the same basic look of the other DC Collectibles figure packaging, but it adds a striking black design to accentuate the fact that, yes, these are the Bad Guys.

The front of the packaging prominently announces the DC Comics Super-Villains. The front features a peekaboo box which allows you to see most of the figure inside the packaging.

The back is the boring part and I really wish DC Collectibles would put as much attention in the front and sides as they do the back. We really only get a headshot of this figure, plus headshots of other figures in the line including the Joker and Captain Cold. To finish off the back, we get a pretty tame fight between the Black Manta and Aquaman figures. *yawn*

Pretty standard and solid packaging. I’m keeping the box which almost says a lot for me (especially when I have no room in my house). 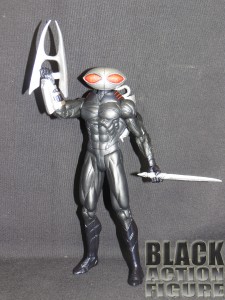 I was resolved to only accept that this figure only had the claw weapon that is seen on the front of the package. It seemed pretty acceptable to me that at least something came with the figure.

I was pleasantly surprised to find that the figure’s non-removable gear pack on his back contained two removable stilettos! That was an unexpected plus for this figure.

Now, the accessory that we should have received: an alternate head. An alternate head would have made me given this figure the highest score. Oh well, hopefully the next Black Manta figure will include one.

As it is now, I’ll award 25 points out of 100 for each of his weapons. Every bad guy should have a health assortment of weapons.

As you see, I’m trying something different that I would like to include on more of my reviews – video. I want to play with video enough to maybe put out a video review (I read somewhere that people prefer that over reading)…and maybe even leading to my own podcast one day. (If anyone would be interested in doing one with me, let me know…) 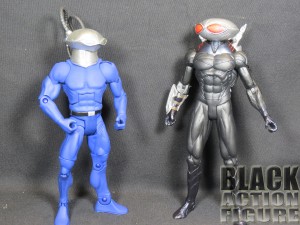 Anyway, what can I say…I love this figure. This sculpt and look is so much more threatening and menacing than his last incarnation. Before the DC reboot, Black Manta was like Aquaman to me…a little bit of a joke. He wasn’t very threatening. He was easily defeated most times. He didn’t have any memorable appearances to me.

This Black Manta has easily succeeded his predecessor in every way. The black wetsuit (vs. the bluish-purple), the lower profile breathing tubes (instead of the “antennas”)…even the neck line looks better.

The florescent red eyes against the silver of the helmet set this figure off. You just know he’s ready to get into it. The included weapons look like they come straight from the comic book itself.

As you may know, I’m not a big “paint app” kind of guy, but the paint application is spot on and clean.

The only thing that would make this better? Just like the accessories, I say a new head. A helmetless version of Black Manta would have the score near perfect. 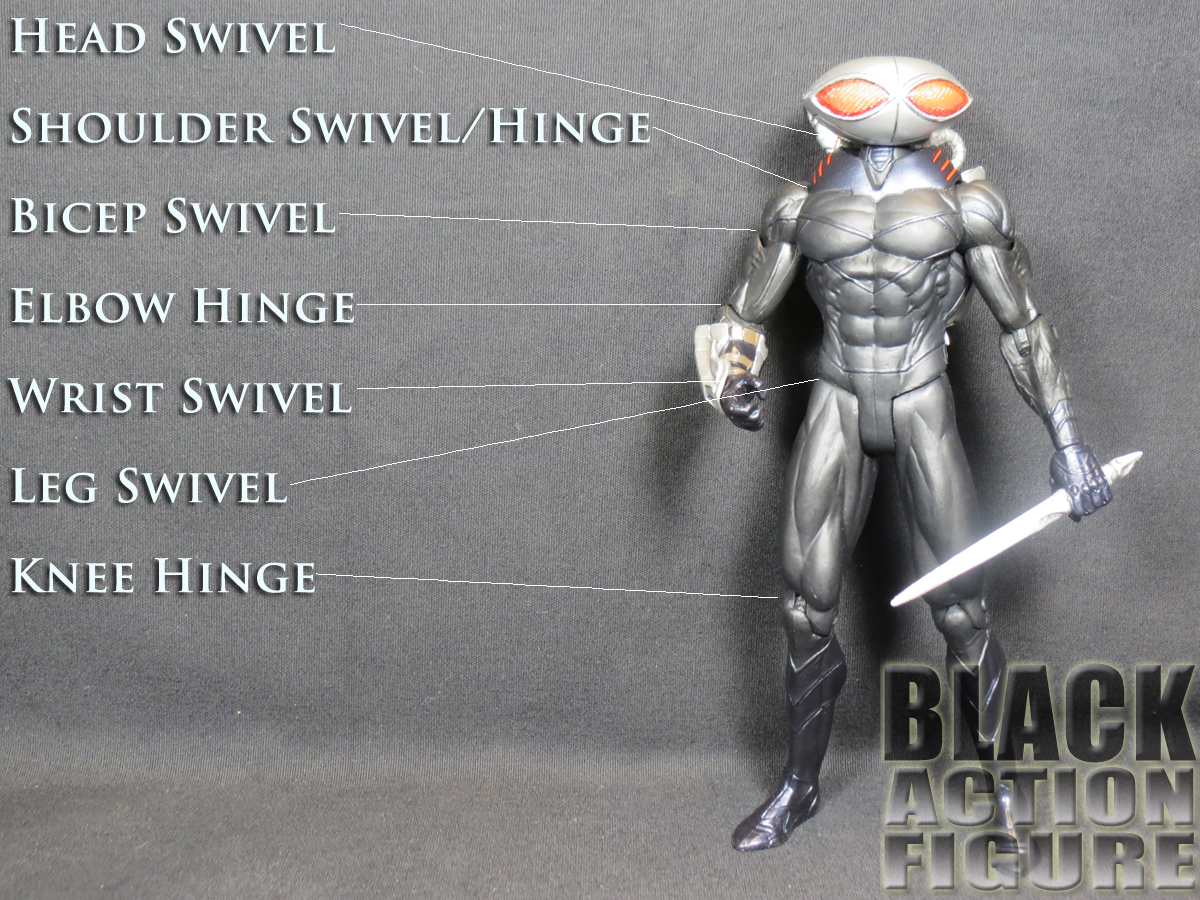 While DC Collectibles continues to miss the boat on articulation, they are getting better. This figure has around 15 points of articulation. What’s most noticeable is the increase in arm articulation.

Of course the included articulation is not always perfect. The swivel of the head is hampered by the breathing tubes. I found myself posing his head over his left shoulder only to turn around and find that his head is back facing front.

The head can also not look up and down. I love when increased head articulation is added in a figure because it gives more dramatic poses. The ability for this figure to look up or down again would have increased this score above average.

The lack of a thigh (or shin) swivel is also a little unacceptable. If not give us these things, at least make the ankle have a swivel.

While I’m on the subject of articulation, I believe while Mattel is limiting their offerings, now is the time for DC Collectibles to ramp up theirs and add some articulation in to boot. They may even see more mainstream retail outlets carry them.

Somewhat dramatic articulation…but not enough of it.

Some final thoughts…
Fun Black Manta fact…Black Manta’s first name is “David” (I knew I liked him for a good reason).

Fun Black Manta fact #2…Black Manta’s initials are something we use often around my toddler daughter…although it doesn’t stand for Black Manta when I use it with her.

Black Manta is a choice figure to have in your collection. If for anything just to torment poor lil Aquaman…he just doesn’t get beat up in the comics enough. I do find it funny that someone who can punch Superman a city block (Aquaman) still has trouble with Black Manta, but whatever. I’m not a writer, just a consumer.

Let’s hope that Black Manta continues to grow as a strong supportive character in the comic books…because that will lead to more and better collectibles! 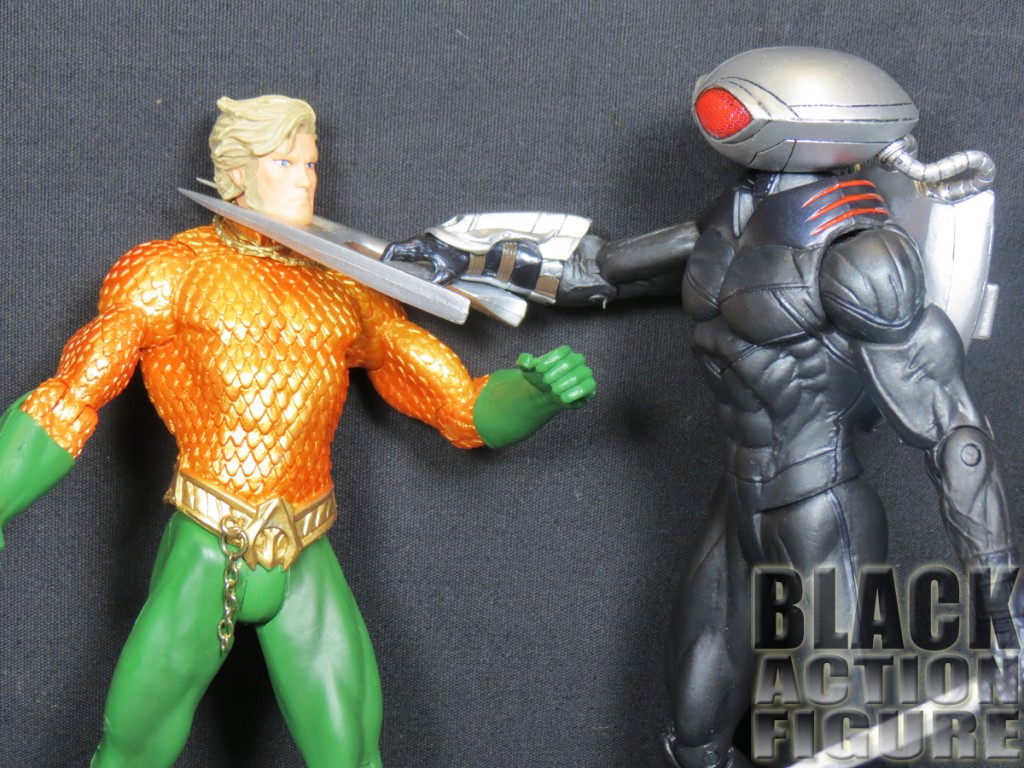