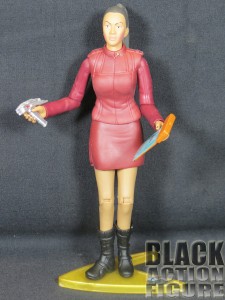 I don’t have much time tonight and I really wanted to complete a review so I picked one that I’ve been holding on for awhile and would be semi-easy to review (I think).  I actually was going to review this figure before the last Star Trek movie came out. Well, I missed that deadline and that movie is already on DVD…so instead of waiting another three years for the next one to come out in order to review this figure, I think I’ll go ahead and knock this one out.

We have Cadet Nyota Uhura portrayed by Zoe Saldana in 2009’s reimagining of Star Trek. I actually couldn’t wait to get this figure especially since they didn’t do a toy line for this last movie. When I got the figure, I realized why. Let’s go ahead and jump into this review… 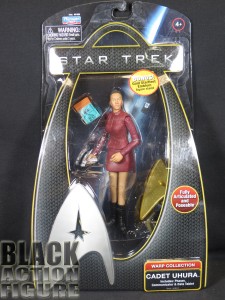 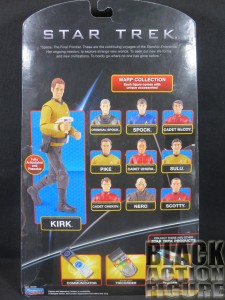 Nothing really bad to say about the packaging. As far as packaging go, it’s pretty basic. On the front we have Cadet Uhura prominently displayed on the blister pack with the features and accessories almost lazily thrown on there for good measure. Very lackluster…nothing about it really makes me think this is nice packaging. I’ve also started to dislike packaging where you can’t tell what the figure is right away if it was on a peg. I have to commend Hasbro for perfecting that. I can come in and take one quick look at a peg full of Hasbro figures knowing which ones I have and don’t have. Although I did not purchase this figure in a store, I have readily become prejudiced against mediocre packaging.

The back of the card is just as boring. We have all of the figures available in this line and some boring-ass, fake plastic communicators and tricorders along the bottom. Nothing on this back screams “BUY ME NOW!!!” If it doesn’t at least try, why should I care to collect any of these? Unfortunately (or fortunately) I didn’t care, so Cadet Uhura will be my only foray into this collection. 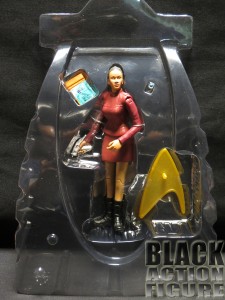 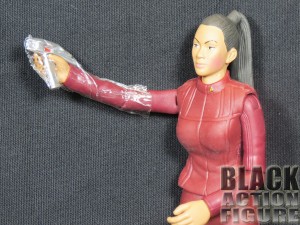 One of the saving graces of this figure is accessories. I can’t stress enough how important accessories are to give a figure some worth. At the very least, manufacturers could include the stand…luckily Playmates has provided us with both great accessories and a nice figure stand.

This figure comes with a phaser, a communicator, and a datapad. These are done very well and are very relevant to the figure, so no complaints there.

Also included is a Federation Logo styled action figure stand. A pretty nice bonus, but after taking the figure out, I really understand why they need it. There is no way I would be able to keep this figure standing without it leaning on something so the figure stand is not only a nice way to display this figure but is very functional as well.

One thing I found strange was how they sealed the phaser to this figure’s arm to presumably keep it from moving or shifting inside the package. This is probably the first time I have seen this done in this way. Certainly effective and maybe a little better than the way Hasbro does it (with little clear rubberbands). Regardless, it worked. This figure is over four years old and is still in the same pose in the package as when it rolled off of the assembly line. 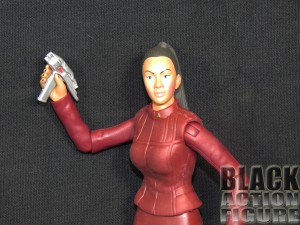 To me, this is the start of the downfall of this figure. I struggled to see the likeness of this figure to Zoe Saldana. Yes, this figure shares some of the same distinct features like the shaped eyebrows and eyelashes, and phony pony (nice to know they still have weaves in that century). But it feels almost done in the simplest way possible. Almost like those cheap Playmobil action figures you get when you buy the jeep playset. It feels like the same creepy emotionless stare.

As far as the body, they got it all wrong. They really didn’t go for actual person accuracy. While maybe a nice generic figure on the …err…action figure, this in no way is a scale model of Zoe Saldana, who is about 80lbs wet. Zoe doesn’t really have any breasts while this figure does. It’s just kind of awkward.

The paint application of this figure is again…basic. The colors are flat and boring. What’s even funnier is that the paint that they used tends to get reflective when flash photography is used. I had to adjust my pictures using Photoshop or turn off the flash and backlighting altogether. Otherwise I would have just had to retake these shots again.

Does this figure look like Cadet Uhura in this line? Definitely. Zoe Saldana? Not really. 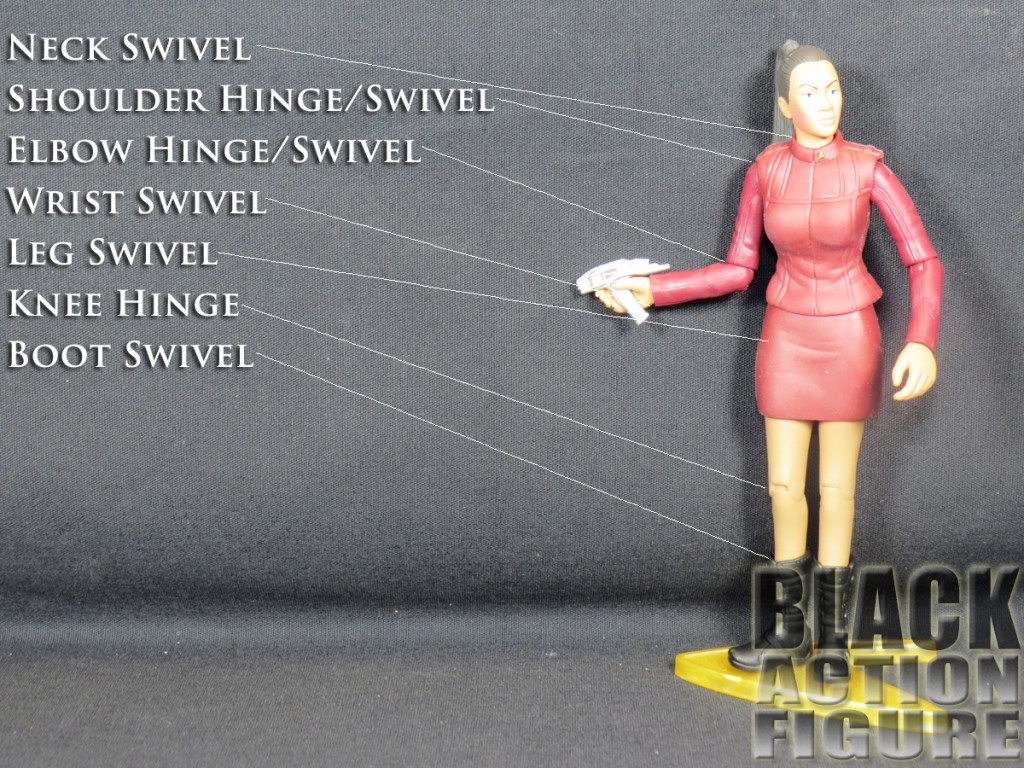 This figure comes with surprisingly a nice set of articulation. Arguably the best thing about this figure. If you have it in your collection, you can tell people that you got it for the articulation (which is said that you have to explain in the first place).

I have counted just over 17+ points of articulation. Impressive especially since the rest of the figure is sorta crap.

To note, I believe the figure has some type of waist articulation, but the rubber clothing prevents that from turning.

While I respect the articulation of this figure, it will still get an average score.

Some Final Thoughts…
This review turned out longer than I ever thought it would be.  This is one of those figures they rush to production without really caring about the details that collectors worry about. Since this figure is from a movie that is over 4 years old now, I’ll go ahead and end it right there.

EDIT: Okay one more note…I wondered why they didn’t make any figures for the Star Trek: Into Darkness movie…now I know why. Playmate, thank you for trying, but please next time either get better sculptors or just leave it be…they obviously picked the latter this time around.