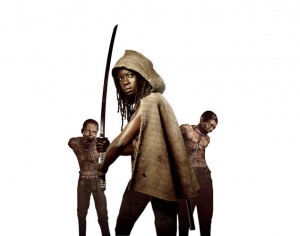 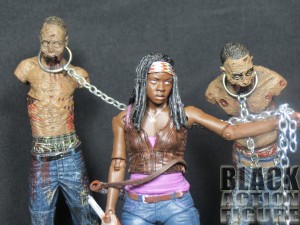 I decided to finally review my Michonne and her pets for a few reasons: 1) The Walking Dead has premiered for this season and we’re already three episodes in of some goodness, 2) Michonne is a badass, and 3) My wife just Cosplayed her at the Wizard World Nashville Comic Con.  This felt like a good time to feature these figures and since I’m about six months behind in reviews, why not?

Michonne portrayed by actress Danai Gurira has readily become a fan favorite among The Walking Dead viewers (not to mention The Walking Dead comic).  It was pretty evident how popular she was since my wife got stopped every five feet to be asked if she could have her picture taken which she graciously submitted to.  Michonne is (hopefully) here to stay! Thanks to the popularity of the character, the action figure is just as popular.  Let’s take a closer look at what McFarlane Toys has produced for our collecting pleasure… 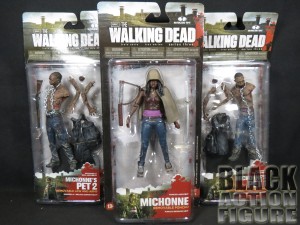 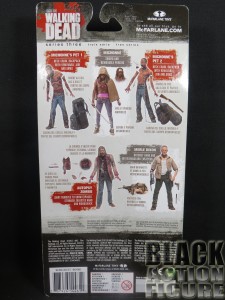 Even though this is basic card and blister pack, there is definitely a reason I like packaging. I think the skinny feel lends to the fact that you don’t need packaging twice as big as the object within to showcase the action figure. It fits well on the peg, or it stands tall if placed on the shelf. Fairly versatile.

I have a few Assassin’s Creed figures that McFarlane Toys just put out and the packaging on it is similar in terms of size. I like the consistency that they keep between their lines (this, Assassin’s Creed, and Halo) even though it basically becomes throwaway once the figure is opened. I remember back int he day when McFarlane Toys packaging was huge (along with the figures). I’m glad to see them progress.

The front of the packaging is drab and draped in shades of brown, reminiscent of the look and feel of The Walking Dead television show. Each figure is clearly marked (Michonne, Michonne’s Pet 1, Michonne’s Pet 2) so I don’t get confused who’s who (like that would happen, but you never know!).

The back of the package on all three figures shows off the figures in The Walking Dead line, the main characters being Michonne and Meryl Dixon (the rest are zombies although not necessarily throwaway zombies).

As far as packaging goes, it’s pretty standard across these three figures, so if you’re a cardback keeper like I am, you really only have to keep one in the series. The rest of the packaging can go ahead and be dumped (in my humble opinion). Nevertheless, this is a very solid entry in terms of packaging. 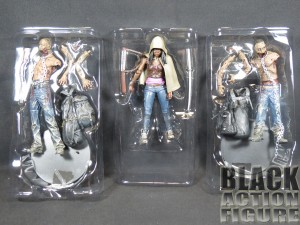 With the few figures that I have in The Walking Dead series (comic based and show based), I’ve never felt cheated on the amount of accessories that come with these figures.

Michonne comes with a removable poncho, her trademarked sword and wearable sheath. I was grateful for essentially getting these three accessories until I opened up the pet zombies and my mouth just about dropped.

Along with the figure (both essentially have the same accessories) you get a chain leash, a backpack to carry Michonne’s supplies, a shotgun with one of the pets (which fits into the backpack), and a stand to presumably keep the figure from tumbling over carrying all of those accessories.  But wait, there’s more! You also get the figures missing arms and jaw in case you would like to use it with another scene, maybe a setup with our heroes surrounded by random zombies! Be warned though…it is nearly impossible to put in one of the zombies’ jaws into place…although I may attribute that to having fat fingers.

Needless to say, I’m pretty pleased with the amount of related accessories. While Michonne did not come with a stand (or even holes at the bottom of her feet to accommodate a stand), the figure still stands up pretty good on its own so I’m okay with that. 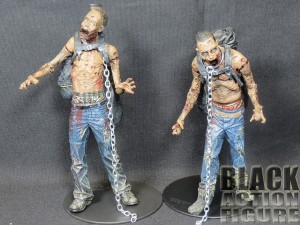 The zombies were pretty easy to do, so they get a pass. I mean, even if they didn’t exactly look like the pet monstrosities that they are, would we really care that much? I have to say since I’m getting them out the way now, one thing I didn’t notice with the pet zombies on the show that I have with these figures is that both of their pants are sagging. Is it because they were both black before being zombiefied? Is it because they’re not being fed properly and their pants are sagging from weight loss? Are they just ‘keeping it real’ We’ll probably never know…

Now the Michonne figure itself, well, the likeness is pretty amazing. You can see in this preview post from the toy fair that I was amazed at the dead-on likeness of the tv version of Michonne. The pessimist in me thought that this was the prototype and the finished product would be nowhere near this good. Thankfully, I was wrong.

The sculpting in this figure is some of the best I have seen at this 5 inch scale. The permanent menacing scowl on her face sets it off, and the accurate paint application and detailed sculpting of the rest of the figure – from the top of her dreadlocks to the flaps of her shoes – is a near perfect representation of the character.

I know McFarlane Toys has been rumored to be using 3D imaging of the actors themselves to produce such high quality sculpts. If that was the case, I definitely applaud their efforts because this is the type of quality we should see in all of our figures.

Articulation
Getting the zombies out of the way again, they have about 6 or 7 points of articulation. That’s very forgivable. They’re zombies. 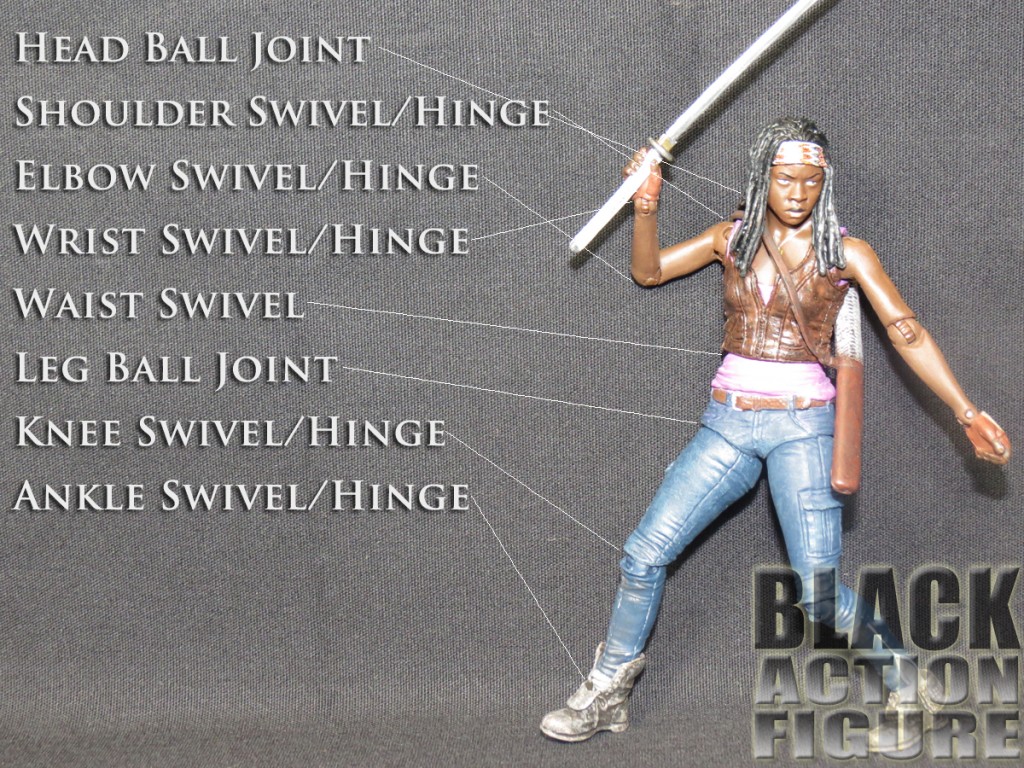 Michonne on the other hand has over 24 points of articulation. I knew McFarlane had it in them to add adequate articulation to their figures and this just proves my point. And even though this figure has the longer hair which usually impedes head articulation, Michonne has a pretty good range of movement.

One thing to note, the hinges have some sort of click/lock feature on them (look at the right wrist and the left elbow in the picture above) which I believe helps the figure keeps the pose. I want to say more but really don’t feel the need to. Great articulation all around. The only thing I may have added is a thigh swivel and also more range of motion in the figure’s arms so that she could have held the sword with two-hands better. 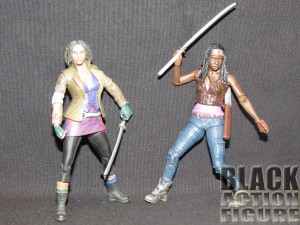 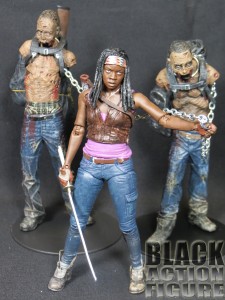 I know this is sort of comparing apples to oranges, but this Michonne figure is a VAST improvement over the comic based figure. Not only with better articulation and better accessories, but also better facial expressiveness. This figure also feels a lot more “real”…which is good since it was based on an actual person.

I look forward to the other figures in this line. I hope they find room for some of the other Black characters on the show. While “T-Dog” is no longer on the show, fan favorite Tyreese has taken his (token) place among the group. Played by “The Wire” actor Chad L. Coleman, I think that should definitely be included in the next wave of figures. Let’s hope he stays alive long enough to possibly enjoy it!