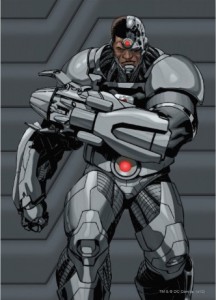 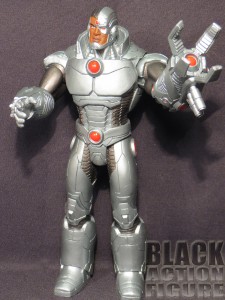 I did this review over at floridageekscene.com, but I like Cyborg the figure and the character so I added him over here as well.

I’ve mentioned this before on here, but Cyborg was one of the first Black super-heroes that I thought was really cool. I watched him fight crime on Saturday mornings during the “Super Powers: Galactic Guardians” cartoon (Super Friends revamp). Around the time I started to collected comic books, I was a little disappointed to learn that he wasn’t on the Justice League of America like in the cartoon, but in the Teen Titans.

Long story short, a few years ago, Cyborg joined the Justice League, albeit a Justice League without Bruce Wayne Batman, Superman, or Wonder Woman. Then “Flashback” occurred and the powers that be made him the premier superhero in that timeline, although there was speculation that they did this to prepare people for the New 52 Cyborg, where he becomes one of the founding members of the New 52 Justice League.

This is the figure based off of that character…so did DC Collectibles deliver? Check it out after the jump… 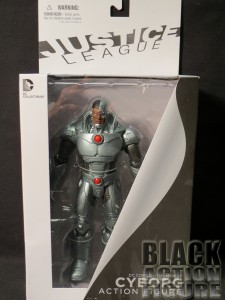 We once again see the standard packaging for a DC Collectibles figure. The packaging is highlighted with shades of metallic gray to match the color scheme of Cyborg. Even though it seems very monotone, I actually dig the color scheme and think they executed it very well. The window box prominently showcases cyborg in all his awesomeness (can you tell I like the character?).

On the right side of the box we get a silhouette of Cyborg. The silhouette is so big, it almost covers Batman and Superman’s silhouette in the background…but they still manage to get a cameo shot in there. So far, I believe Batman has the most cameo silhouette shots out of all of the figures…and well deserved.

On the left side, we get a production prototype shot of the figure and the name of the sculptor. Surprisingly, unlike the rest of the New 52 Justice League, this figure was not sculpted by Jack Mathews but by Brian Fay. In the picture itself, we see that Cyborg has on his Sonic Blaster, although we can only see his normal arm in the window box…so does that mean an accessory comes with the figure? (more on that later) 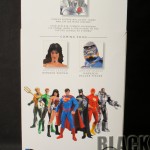 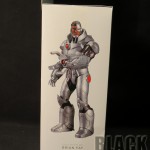 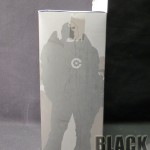 On the back we get the normal setup: Cyborg’s head-shot, a bio-blurb, a “Coming Soon” section with Wonder Woman (reviewed here) and Darkseid head-shot, and a group picture with the seven JLA members.

Nothing new and revolutionary here, but still as effective as previous figures. 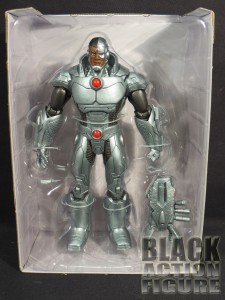 Hidden from view in the package is an arm attachment with Cyborg’s sonic blaster! A very appropriate accessory and weapon for our man-machine superhero. My only grievance is that they didn’t include more attachments. We know he has more weapons and accessories that pop out of him…maybe next time.

I definitely have a complaint about the lack of stand (like I usually do) and my main gripe is that a stand came with the Flashpoint Cyborg.  So DC Collectibles, I think I would rather have a figure stand than nice packaging.  Keep them on the card a stick a stand in there you cheap bastards.

The sculpting on this figure is excellent. The level of detail that the sculptor Brian Fay added to this figure almost makes the premium price of this figure worth it. Just to see some of the detail around this figure’s neck amazes me what they do with action figures nowadays.

I’m not a big “perfect paint on an action figure” person, but I do notice one or two things. The silver paint application on the armor portion of Cyborg is done with a metallic matte silver. The red portions on the figure representing glowing energy is also done well. The glossy red paint is a stark contrast to the silver metallic matte and it almost “glows” with power.

As we get more action figures from DC Collectibles, I hope to run into more of Brian Fay’s work.


Sculpt/Likeness Score: 9 out of10 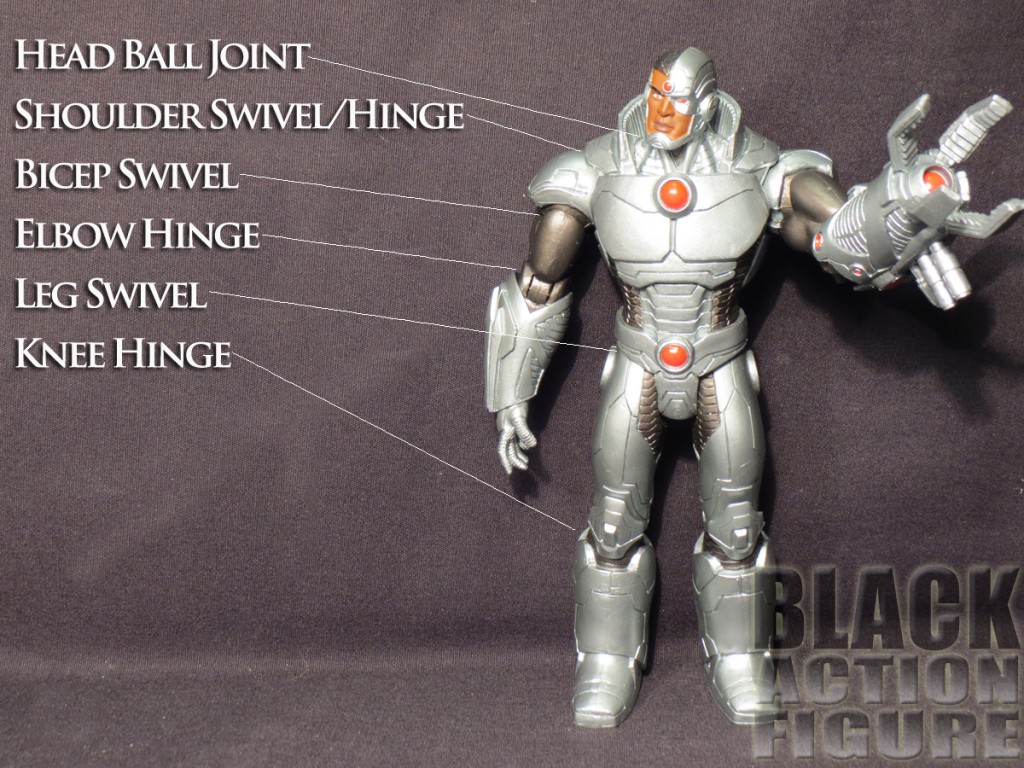 And now the downfall of the entire series to me – the articulation. This figure has only 13+ points of articulation…once again making this more an articulated statue than an action figure. After reviewing Mattel’s Hawkman (reviewed here), I know there is hope that at least Mattel will put out a decent figure that may not look quite as nice, but will have great articulation.

I have to mention that the arms are very hard to maneuver due to some of Cyborg’s “Cybernetics”. His attachment only swivels part of the way due to the design. The figure’s arms should swing out with the hinge, but it is very stiff and any extra applied pressure could possibly break the figure.

*UPDATE*: I forgot to mention the Forearm Swivel in the picture to the left. This brings the articulation to an almost respectable 15+ points, although still not that great. I’ll give him an extra .5 point.

Articulation Score: 5 out of 10 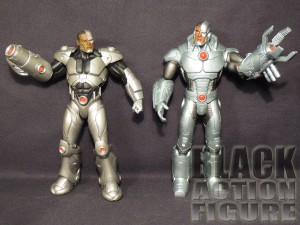 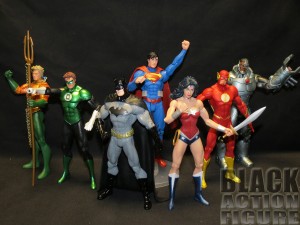 And while I love that there is a person of color in the New 52 Justice League (I guess John Stewart would have been redundant), I can’t help feel like I would not have loved the comic book if it weren’t for the late, great, Dwayne McDuffie who put together one of my favorite teams of Justice League to date. If they had kept him on, I wouldn’t doubt that we would have seen Icon, Rocket, and Hardware on the team as well (which they did anyway on the animated series, Young Justice as a nice little shout out). 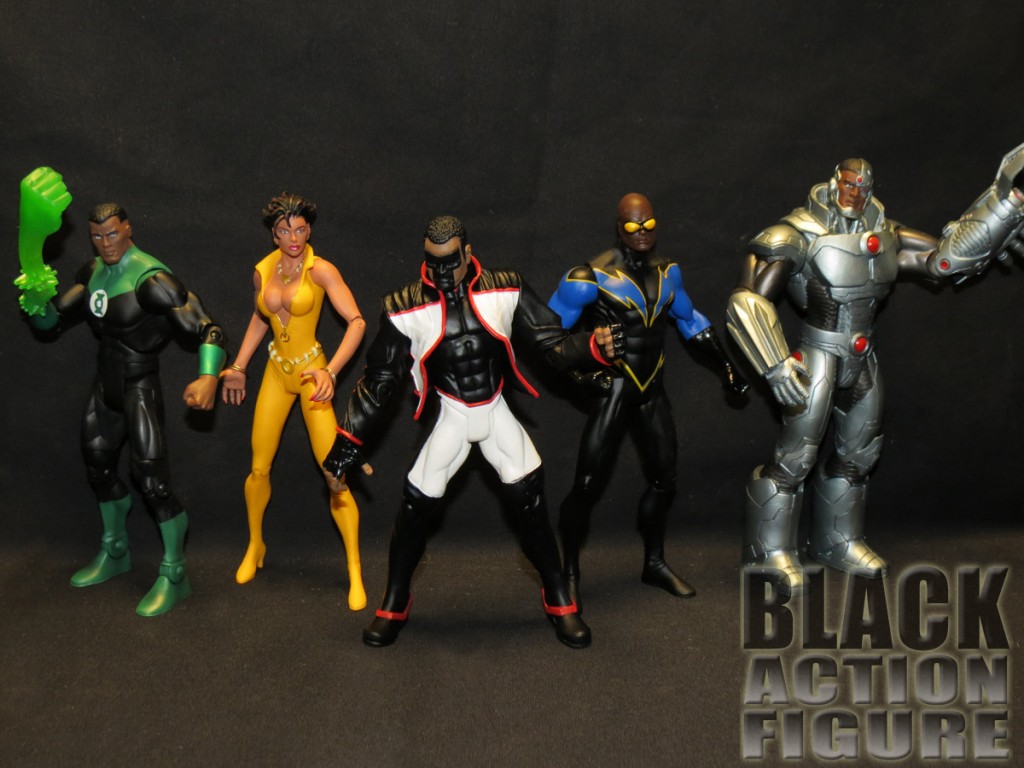 So my team is a definite shout out to Dwayne McDuffie, Tony Isabella, John Ostrander, Marv Wolfman, George Perez, and all those others who made me believe that I could be a hero too… 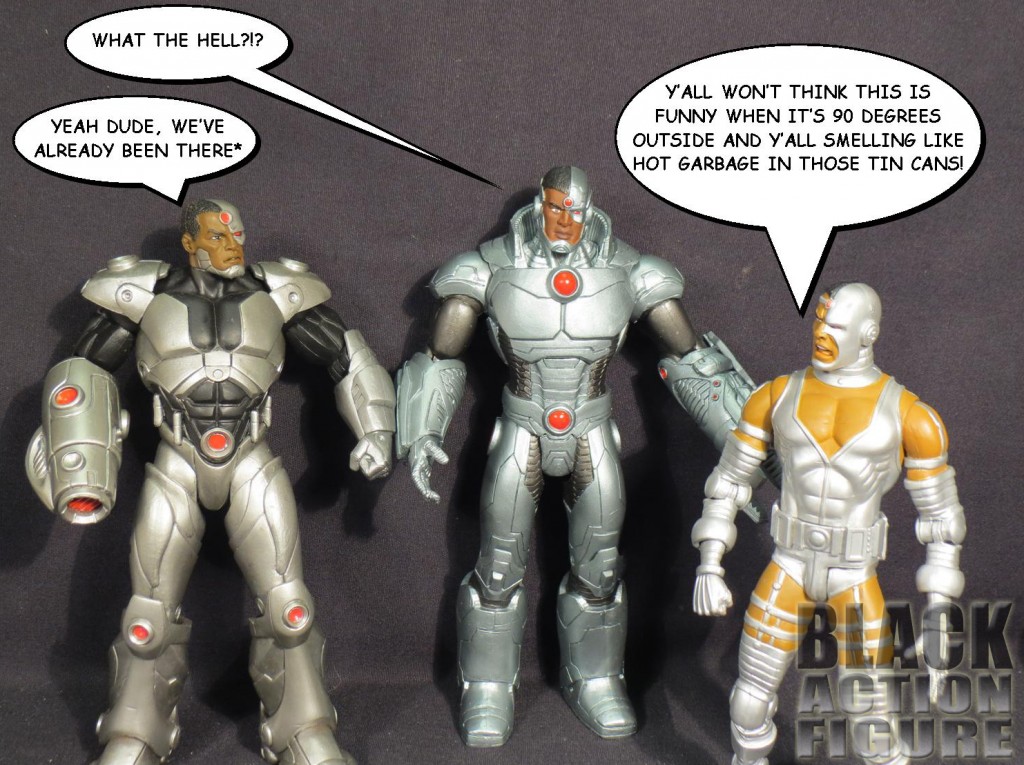