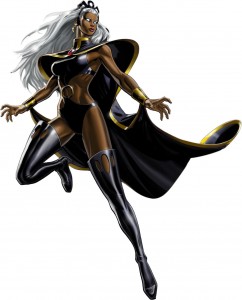 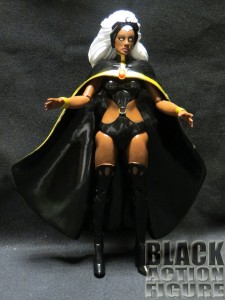 This Storm action figure adds to Marvel Select’s impressive selection of Marvel characters. What’s nice about Marvel Select (via Diamond Select Toys) is that they don’t release a lot of new action figures year and they don’t have to. But they do seem to deliver on a pretty steady basis.

Up next is the review of Marvel Select Storm…did Diamond Select Toys do her justice? Hit the link to find out…

Marvel Select packaging has always been great. It is a big size package, so you feel like you’re getting a lot whether you’re getting a big-size figure like the Hulk, a figure with accessories like Storm, or sometimes both (Thanos).

The front of the packaging features Storm with a huge X-Men badge on the front. We get a first look of the Danger Room accessories this figure comes with.

The packaging is great because the figure can be put away like a book on the bookshelf. On the left side, we have a drawn image of Storm – so when placed on a bookshelf, this is what you will see to differentiate it from other Marvel

On the back we see a picture of the figure along with the Danger Room accessory put together and a bio-blurb of Storm. The bio itself is fairly up to date speaking on her marriage to the Black Panther and her membership in the Avengers.

One of the things I don’t like about this packaging is that it is hard to open carefully. So I recommend that if you are a “mint-in-box” collector, don’t even think about opening it. Because once I opened the package, I just went ahead and threw away the box because it was no use keeping it in the shape it was in. 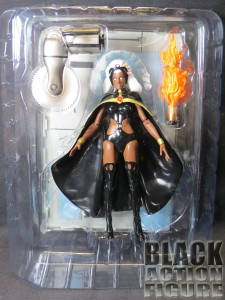 Now while the Danger Room is a great accessory, I wonder why we don’t get some type of lightning bolt accessories like we do with the Marvel Universe counterpart. In fact, there are no accessories to even suggest what Storm’s power may be. But to me, other factors make up for the lack thereof. 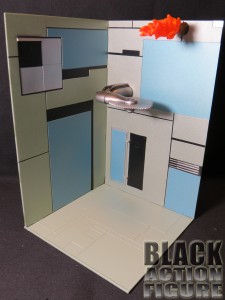 The Danger Room itself is a great display piece and can be combined with other Danger Room displays found with other Marvel Select X-Men such as Cyclops and Colossus. Will Storm’s training allow her to avoid and evade the flame of fury and the buzzsaw of death?!

On top of all of that, they even include an action figure stand. Diamond Select does not feel the need to skimp on a 5¢ piece of plastic. 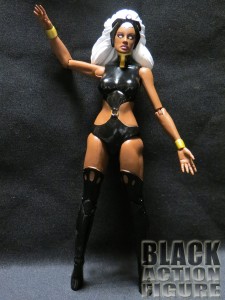 Marvel Select figures have never disappointed when it comes to the sculpting and likeness to a character, and this figure continues that trend. The sculpting and paint application is near perfect. Storm looks just like she did when she was first introduced to the X-Men back in 1975. Hooker boots and barely there swimsuit covered by a cape. 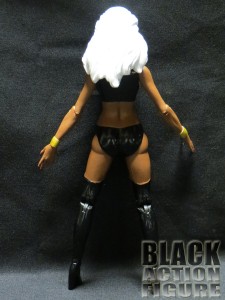 It wasn’t until I took a shot of the back of the figure that I realized something. DISCLAIMER: I am (generally) not a perv. With that being said, I think Storm was sculpted by a brotha, because from the back she looks like she’s smuggling two basketballs in her costume! I don’t think I’ve seen something so uhhhh, ummm…anatomically accurate…for a Black super-heroine. DISCLAIMER #2: this figure is meant for Adult collectors! Go ahead Marvel Select, I ain’t mad at’cha. I’m going to have to give you a perfect score just for that. (Note: please re-read first disclaimer). 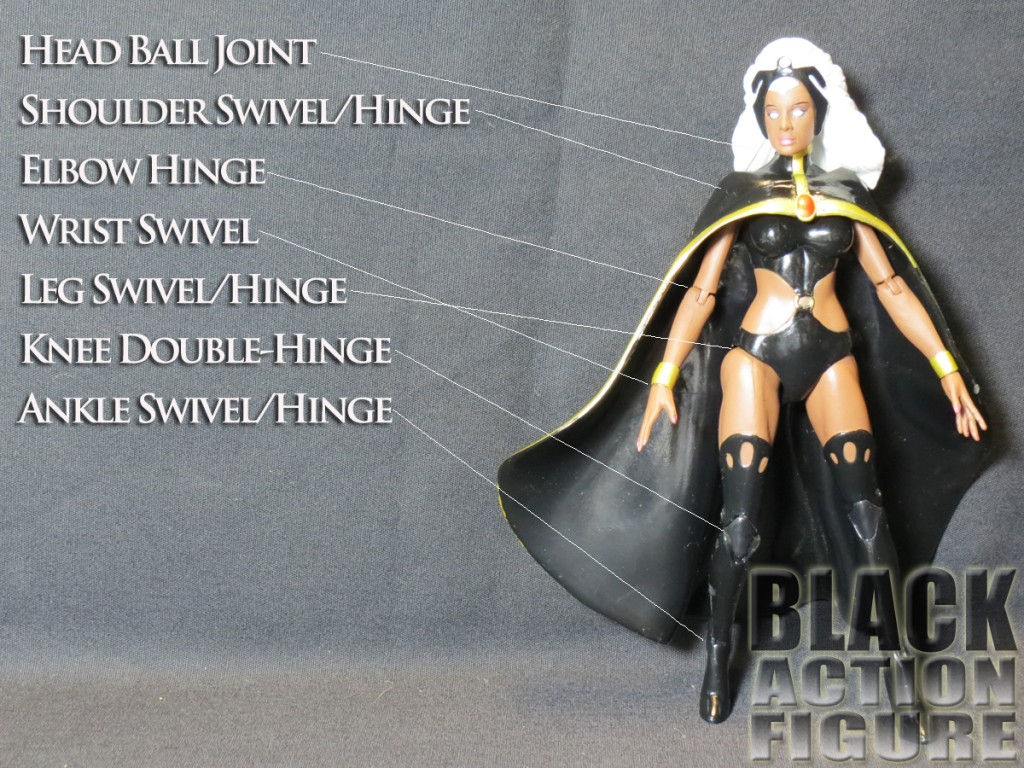 The action figure has about 20+ points of articulation which is a great number especially for a display piece. So articulation is not necessarily the downfall of this action figure, but there are issues which make it a little disappointing at times. For instance, the sculpted hair does not allow this figure to move its head up and down very well.

Another issue is the enhanced gluteus maximus. Because of her “enhanced” sculpting, Storm is unable to move her legs forward and backward to any sufficient degree. 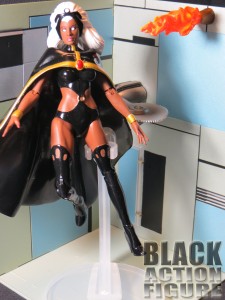 The cape also impedes with the full motion of the figure’s arms at the shoulders. While this is better than its Marvel Universe counterpart (where the wrists were attached to the cape and that figure couldn’t move its arms at all), this is still bitter pill to swallow in terms of proper articulation.

Even with the obvious downfalls, there are still some decent poses that we can place the figure in for display on the shelf. (NOTE: the stand shown in the picture to the right is not the one that comes with the figure)

I’m fairly new in collecting Marvel Select, but with it’s current track record, I’m not bound to stop anytime soon. I’m looking forward to the near future offerings including Rhino, Nightcrawler, and Venom, and I hope to see more displayed at next month’s New York Toy Fair.

As long as Diamond Select Toys keeps putting out quality, solid figures in their line, they have a fan (and a customer) with me.