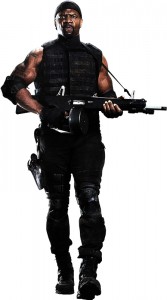 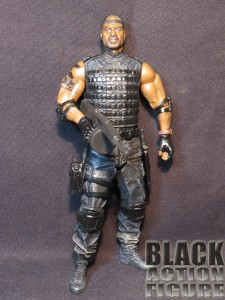 Okay, so I will chalk that up as 2 hours I’ll never get back again…but to make that movie a little more acceptable, Diamond Select Toys put out several figures based on the movie. This one in particular is of actor Terry Crews as “Hale Caesar”, the heavy weapons specialist of the group.

I was kind of surprised, but a little delighted that Diamond Select and not NECA got the contract. NECA sometimes plagues their figures with amazing design but cheap plastic. To date, I have broken about 4 NECA figures from just trying to move their arm or leg at the articulated hinge. Diamond Select has done real well with their Marvel Select figures and other franchises, and I think this may be a start of taking away some licenses from the NECA movie collectible empire. How did they do? Review after the jump… 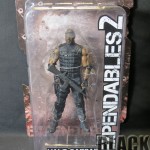 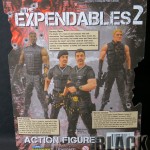 ince I’m most familiar with Marvel Select made by Diamond Select Toys, I’ll compare the packaging to it. I never liked how much extra packaging Marvel Select does at times. It seems sometimes all they put in there is an action figure and it seems like packaging to the extreme. This packaging seems scaled down and just about right. To be honest, I had to remind myself that this was NOT a NECA figure, because the packaging did feel like it at times.

On the back we get some nice graphics, a preview of all of the figures in this release, and a bio-blurb for each character. This makes it nice because Diamond can use the same universal packaging for all four figures. But once the figure is out of the package, you might as well throw it away. I’ve been spoiled by DC Collectibles boxes where you can place the figure back inside if so desired. 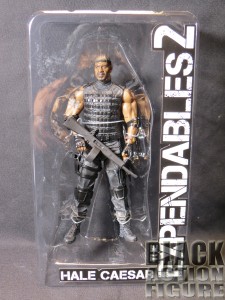 When a friend of mine first looked at the figure, he noticed that the figured had a gun harness and a knife harness, but he couldn’t see the actual gun and knife accessories. He thought I got ripped off and I did too. That was until I opened the package. 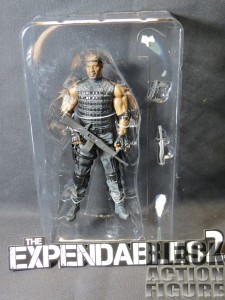 Both the gun and the knife are conveniently placed underneath the “Expendables 2” sign on the package. I can see how this can be easily missed if someone is not looking for it. If you do get this figure, remember to check behind the sign.

On top of the weapons, there are some moveable accessories already  worn on the figure. Caesar comes with a watch elbow pads, kneepads, and 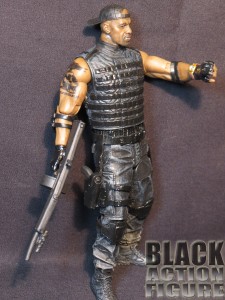 a gun and knife holster belt that can all be removed (some easier than most). These little details add to the figure, but in thinking of cost savings, adding rubber pieces to reusable sculpted arms saves money from sculpting new parts for a figure. At any rate, a good addition. I think Diamond has really started to come into their own.

I do wish that this figure came with a heavier weapon, but as we see in the movie promotional picture above, he is carrying his signature weapon, so no more complaints here. 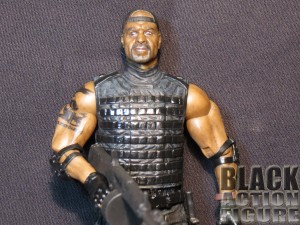 I really want this to look like Terry Crews. And at certain angles like a profile shot, it sort of does. But a straight on view reveals something different. Caesar looks more like an old man than Terry Crews. Crews himself is 44 and he had to be a year or two younger when he filmed the movie. This figure looks like he should be about 60.

Other than the questionable head sculpt, the body sculpt and paint applications are top notch. We even get to see an Expendables tattoo on the figures right arm. The body armor looks and feels great. Even the backwards cap he is wearing looks good. Not too much to complain about here… 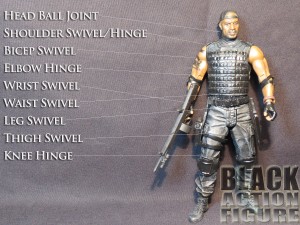 Articulation is respectable on this figure. We get about 18+ points of articulation, which is good for an adult collectible figure. Any less and the figure would be a glorified statue (I’m looking at you DC Collectibles) and any more could have taken away from the sculpt. I am happy with 18+ points and he will be sitting proudly next to my Sam Jackson Shaft figure.

A couple of points of articulation that were noticeably missing include ankle articulation (hinge and/or swivel) and a abdominal hinge. Past that, we get a decent articulated figure.

I’m pretty satisfied with this product, even though I wish the head sculpt was a little more accurate. Terry Crews is one of those versatile actors who shows up in anything and everything, but I think this is the first time he has had an action figure made of him…and deservedly so. Let’s hope he does some more action movies (no more White Chicks, please!) that will produce a line of collectibles that will show off his likeness even more. 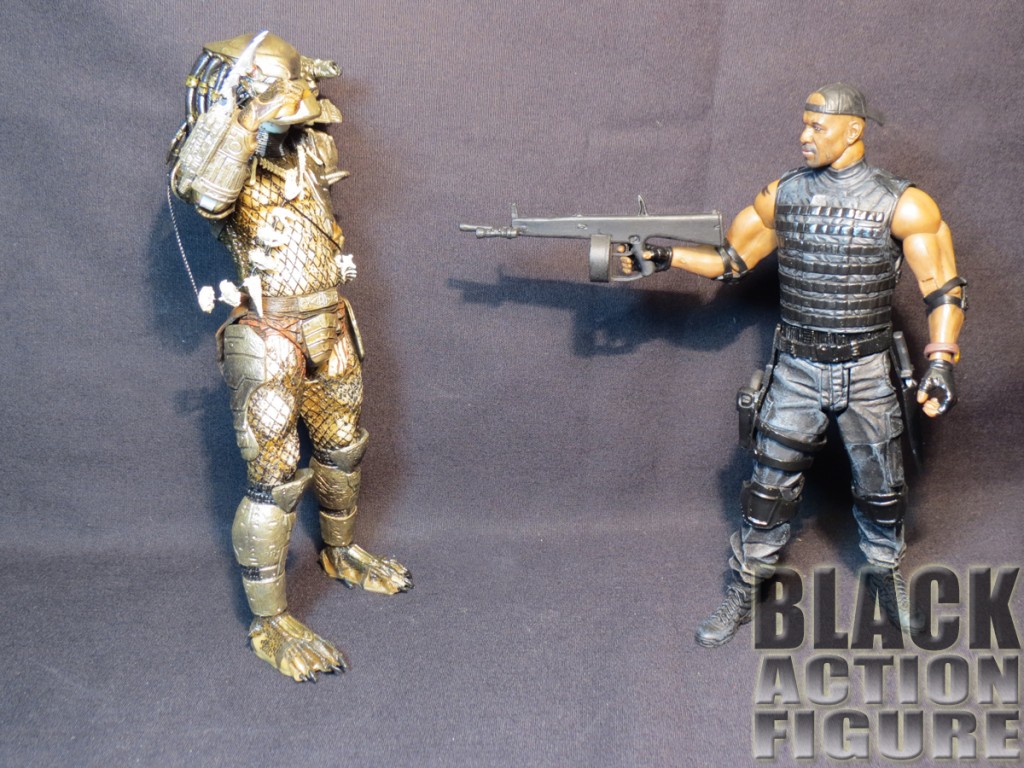