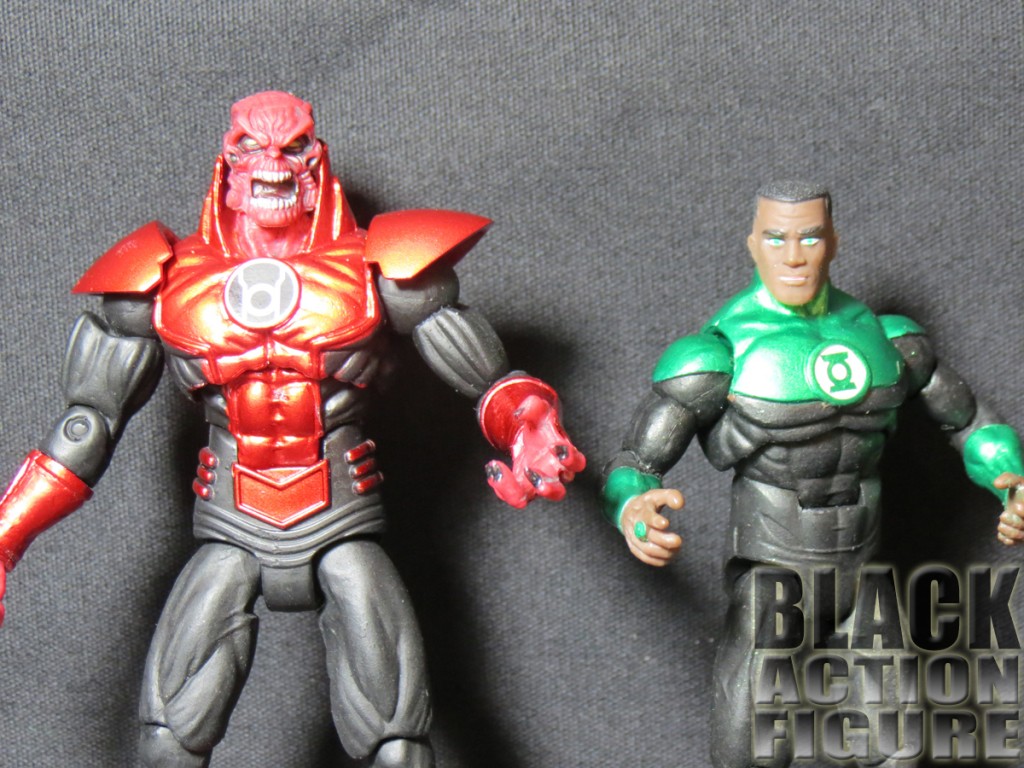 It’s taken me awhile to get back on the horse and do some reviews.  I’m completely backlogged and have tons of things coming up. With that being said, I took some review pics of the New York Comic Con 2012 DC Collectibles exclusive, 3.75″ John Stewart and Atrocitus, before Christmas and since I have some time and I really need to do some reviews, let’s do this!

This set adds to the seemingly John Stewart Green Lantern fixation I seem to be in. For some unexplainable reason, I have been all over the internets collecting John Stewart GL’s. Also, for some unexplainable reason, he has to be one of the harder figures from any retailer (Mattel, DC Collectibles, etc.) to obtain. If there was not a secondary used market (aka ebay), I don’t think I would own this figure in any forms.

What also adds to the fascination to this set is that this is DC Collectible’s second Comic Con exclusive of their new 3.75″ line. I am still pretty excited that they went into this size range and look forward to more figures from them where Mattel failed miserably (Infinite Heroes line anyone?). So how do these figures compare in an ever growing 3.75″ environment? Click on the link below to read the review… 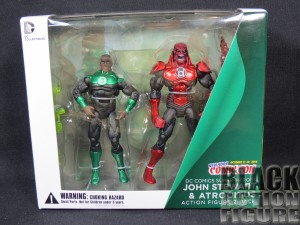 DC Collectibles has standardized their packaging across all of their lines, so we will see similar packaging whether it is Green Lantern, or Justice League, or Arkham City, etc. They have also matched it to look similar to their new(ish) logo. With that said, there is nothing new here. We have a collectors’ box (this is DC Collectibles) showcasing the figures in the front.

On the right side of the box, we get a closeup shot of the two figures. Taking note, this is a little different from the usual DC Collectibles design. They usually feature a silhouette of the figures on this side. But, this being a NYCC exclusive, the change is nice. On the left side, we get production prototype shots with the name of the sculptor underneath. In this case, we have two different sculptors, Paul Harding who sculpted Atrocitus and Robert Lynders who sculpted John Stewart. More on that later. 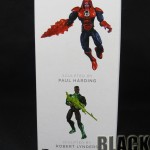 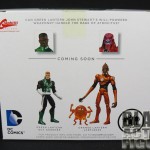 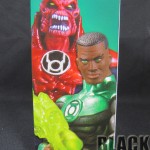 On the back we see the obligatory head shot of the figures along with what is coming next from DC Collectibles. Their next exclusive appears to be Guy Gardner Green Lantern along with the Orange Lantern Larfleeze. Great, more figures, but it seems to be a sausage-fest at this party…guess what DC Collectibles (and Graphitti Designs)…there are women too in the Green Lantern world. Let’s come out with an Indigo-1 and Fatality Star Sapphire already! 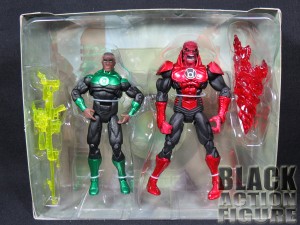 It always feels good nowadays when action figures come bundled with accessories. With all of the cost cutting savings people are doing nowadays, you never know what you’re getting or if you’re going to get it. Luckily, we get two different accessories in this set, one for each lantern.

John Stewart gets a green sniper rifle for his accessory, celebrating the fact that he was a marine sniper before he was a Green Lantern. Atrocitus comes with a red energy flare. 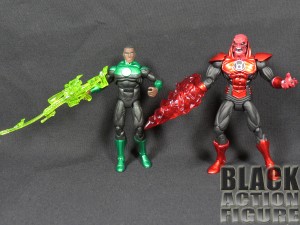 John’s sniper rifle fits awkwardly in his hand. With a little manipulation it will stay, but it will definitely fall out if you look at him cross-eyed. Atrocitus’ weapon is a little better – it just slips over his hand.

Another thing that bothers me is that John’s accessory is made from soft, malleable plastic…which means it bends. You can bend it back to the regular shape all you want, but sometimes when this stuff bends, it tends to stay in there. I don’t think you would want to fire a bent sniper rifle. I don’t think those are accurate at all. 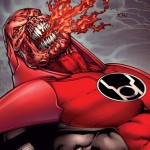 Let’s do Atrocitus first, because this one is easy. This figure is dead on (see right). All that is missing is some red blood-like ooze shooting out of his mouth. Other than that the sculpter, Paul Harding, did an excellent recreation of this comic villain. I feel he is ready to terrorize my other figures. 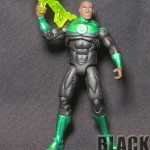 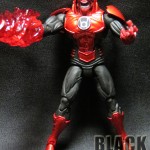 John Stewart on the other hand has left a lot to be desired. Kudos to Robert Lynders for trying his best, but from prototype to production figure, there is a lot missing. For one thing, on the prototype, it looks as if John has a hardcore grimace on his face, like he’s about to take someone out. What I received was a figure with a permanent surprised look. The ratios of his body is a little off. Almost like the chest on this figure is a little too big. You can tell it is a different body type than the Kyle Rayner GL that came out earlier last year, but Kyle Rayner looks a little more natural while John comes off looking a little freaky. 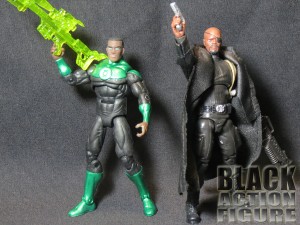 One thing to note in terms of size, the DC Collectibles 3.75″ action figures seem to be slightly smaller than Hasbro’s Marvel Universe (and related lines) action figures. They are not as small as Mattel’s DC Infinite Heroes line, though. Even with the slight size discrepancy, they may be able to fit in well with your Marvel 3.75″ collectibles.

Sculpt/Likeness Score: 7 out of 10 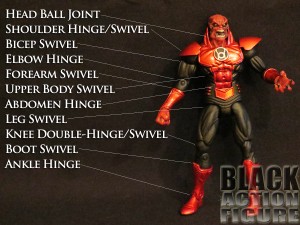 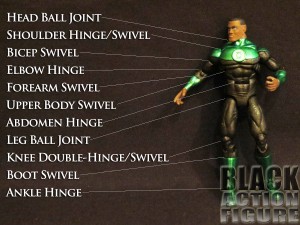 Now while I applaud the high number of articulation points for a 3.75″ figure, I also have to warn you…a lot of the articulation is very stiff and if you play around with it for too long, it may be prone to snap right off. With that being said, be careful when trying to turn a hinge or swivel on this figure. If it is a little tight, work it back and forth.

Fortunately, my figures did not break, but I have seen several video reviews on Youtube where the figure just snaps at the arm or at the leg from too much pressure being applied. If that happens, have the super glue handy or be prepared to hit up ebay for your replacement.

I have to honestly say that I got really excited when DC Collectibles got into the 3.75″ game. I thought that these figures will be the Hasbro Marvel Universe of the DC characters. I was sort of right. These are sort of the second year of Hasbro Marvel Universe, where the sculpts and articulation started to get better. They have a little ways to go before they reach Hasbro’s current level (think Beta Ray Bill, Kraven, Nova, etc.).

I honestly can’t wait until they come out with more figures and even move away from the Green Lantern characters. A New 52 Justice League in this size would look great on the shelf. Until then, I’ll continue to enjoy my John Stewart & Atrocitus figures.