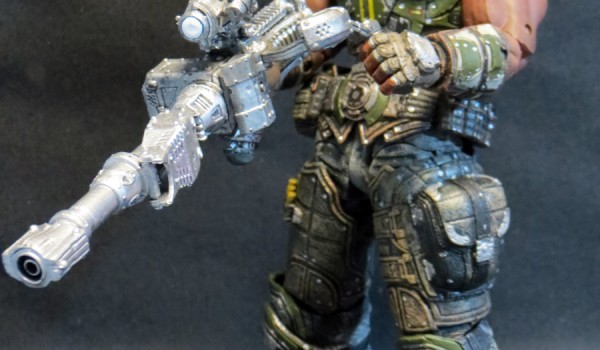 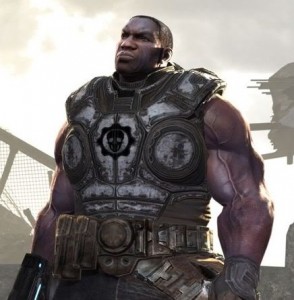 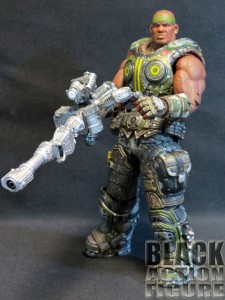 The original Gears of War video game blew me away. When Gears of War 2 came out, I was in line the day of release at Circuit City (remember those?), one of the few times that I paid full price for a video game.  Then Gears of War 3 came out and I…had other things to do. I did not pick up and play the game right away.  I really had other priorities at the time.

Well, I finally picked it up around the beginning of summer, and yet again, was blown away. After playing it, there was one thing I knew…I had to pick up an Augustus Cole action figure and review him on my site. I was finally able to get one and was all set to review him a couple of months ago…but just like I sat on playing the game, I sat on reviewing this figure, choosing instead to review newer figures. I now have the chance to review him and after a request on my Facebook page, I bit the bullet and sat down to write this review. Join me after the break to check out Augustus ‘Cole Train’ Cole from NECA’s Gears of War 3 series. 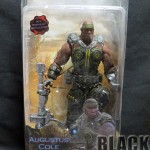 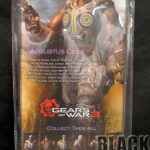 Although I like NECA figures, I do have to admit that I really dislike their packaging. It’s not that it is not decorative enough or boring. It’s because they put most of their figures in a clam shell. I really dislike clam shells. I still remember buying my first Sony Walkman (or maybe it was its Sears knockoff) but when I got it home, it took an act of God to try and get that clam shell open.

The design on the packaging is fine. You get a shot of the character the figure was designed after along with important things like name. They even included the name of the weapon, the infamous “One-Shot”. More on this later. We also get a blurb that this figure has over 30 points of articulation! Now we’re talking!

On the sides we get two different shots of Cole from the video game. I believe NECA includes all of these shots to prove that they put out quality figures (most of the time). 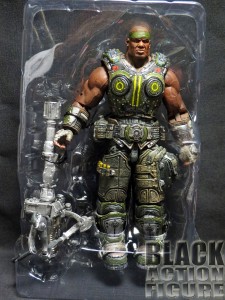 The back has the production prototype shot of Cole and a little bio-blurb. What’s funny about this shot is that we see a different weapon in his hands than the one they packed him with. It’s all good, the one that got packed with him is bigger.

Once you get the figure out of the package, you are now faced with those little twisty-ties. This figure is also so huge that they had to put it through the package to keep him secure. After about 15-20 minutes of cutting out, untying, and pulling, you’ll finally have your figure free. The clam shell package does not really allow you to reuse for display purposes (if you used a knife to get it open like I did), so in the trash it goes. 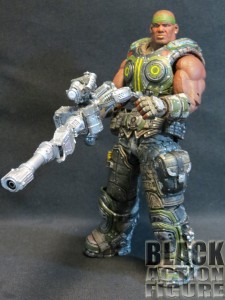 Fewer and fewer action figures these days are coming with accessories and you kind of get happy when one does. This Cole figure comes with the legendary One-Shot weapon. Why legendary? You only have to play the game to get that answer. During the game when I equipped this monster, I was able to take down some of the biggest enemies in the game with just – yep, you guessed it – one shot. There were advantages and disadvantages to this weapon, but it was still pretty great.

While I do appreciate the weapon, I have to say that I had some difficulty trying to figure out how to position the weapon in Cole’s hands. It’s not immediately obvious how to put it in and once you get it in his hands, there are only a couple of poses you can do with it.

My suggestion? Include more weapons. It’s obvious you already have the mold for them (since they are included with other figures) and in the game, you have the ability to hold four different weapons. Why not include this, a pistol, and a couple of grenades? That would have made this category a 10/10 for sure. Guess it wasn’t meant to be… 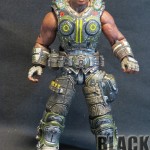 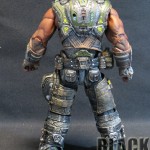 NECA puts out some of the best likenesses in the business, and this was no exception. They used the 3D character graphic straight from the game to sculpt this figure, and it shows as this figure looks exactly like Cole from the game.

My only gripe is that there are a bunch of pockets and holsters and weapons on his body that are sculpted in and cannot be removed. So we are teased with a canteen on the side of his belt, but it can’t be removed at all.  It would also be cool if we could remove his armor some kind of way. It seems that these characters live in their armor 24×7 and we only get to see them out of the armor at the end of the game… 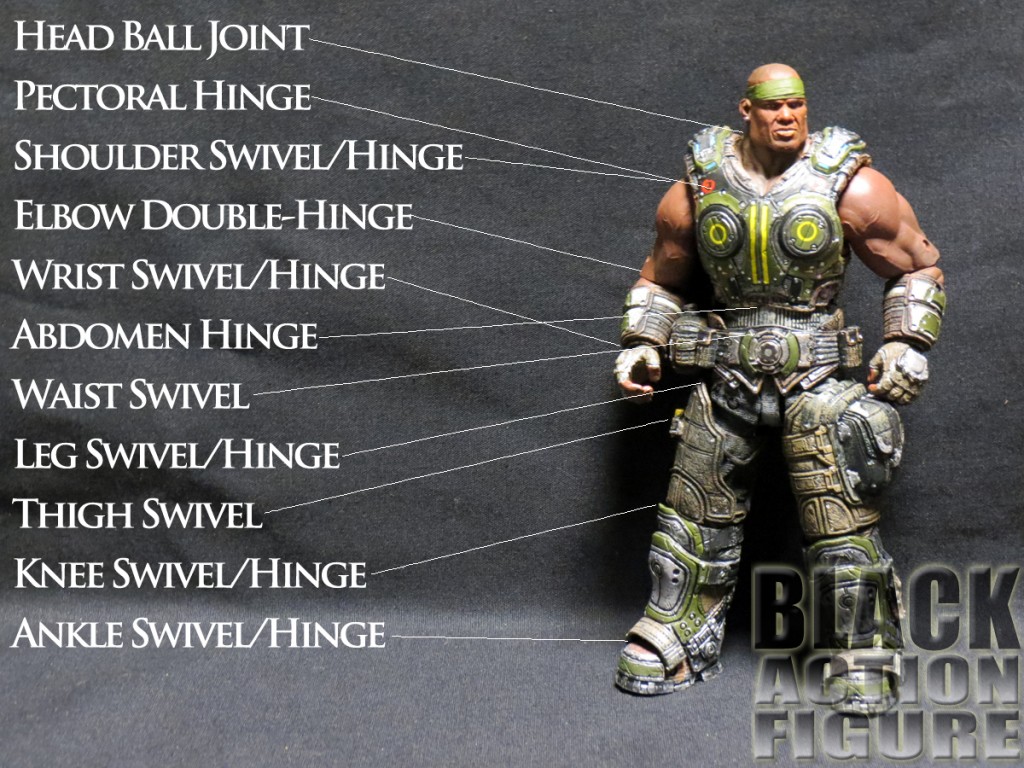 Different people calculate articulation in different ways. I try to be fair and accurate when making my assessment, but sometimes where I will see one point of articulation, someone else would see two.

Some notable points…there is what I am calling a pectoral hinge that allows this figure to pull his arm back in a more natural looking pose. Now that’s some extra! I also like how the leg hinge works with this figure…a break from the normal ball jointed legs you see in figures.

To note, while the ankle does have a swivel feature, Cole’s armor prevents him from using it effectively. Despite that tiny flaw, this figure is getting a perfect articulation score because who doesn’t love a super articulated figure? I’m not even sure I have this many points of articulation… 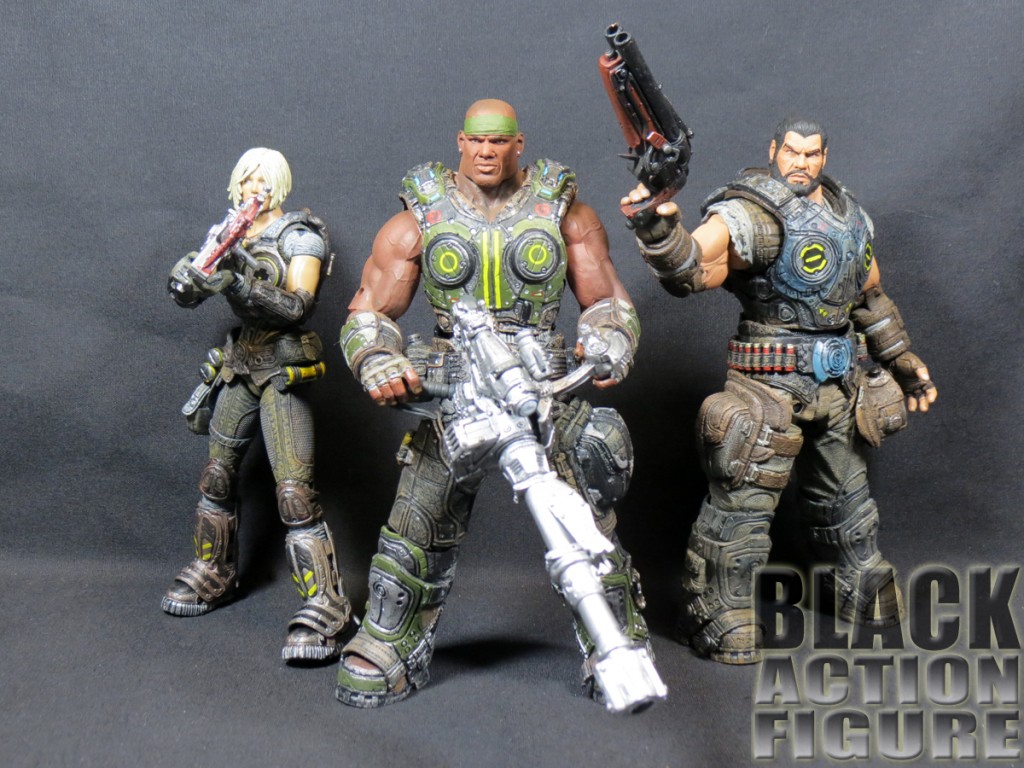 The Gears of War video game franchise is very popular and I’m glad that they gave the action figure license over to NECA to make some pretty awesome figures. While I think the figures are lacking in accessories, the extra special attention paid to articulation makes up for some of that. While I’m not a completist with this line, I do have a few figures and look forward to maybe picking up one or two more.

If you are interested at all in this or any of this line, I definitely suggest picking one or two up…you will not regret this purchase. 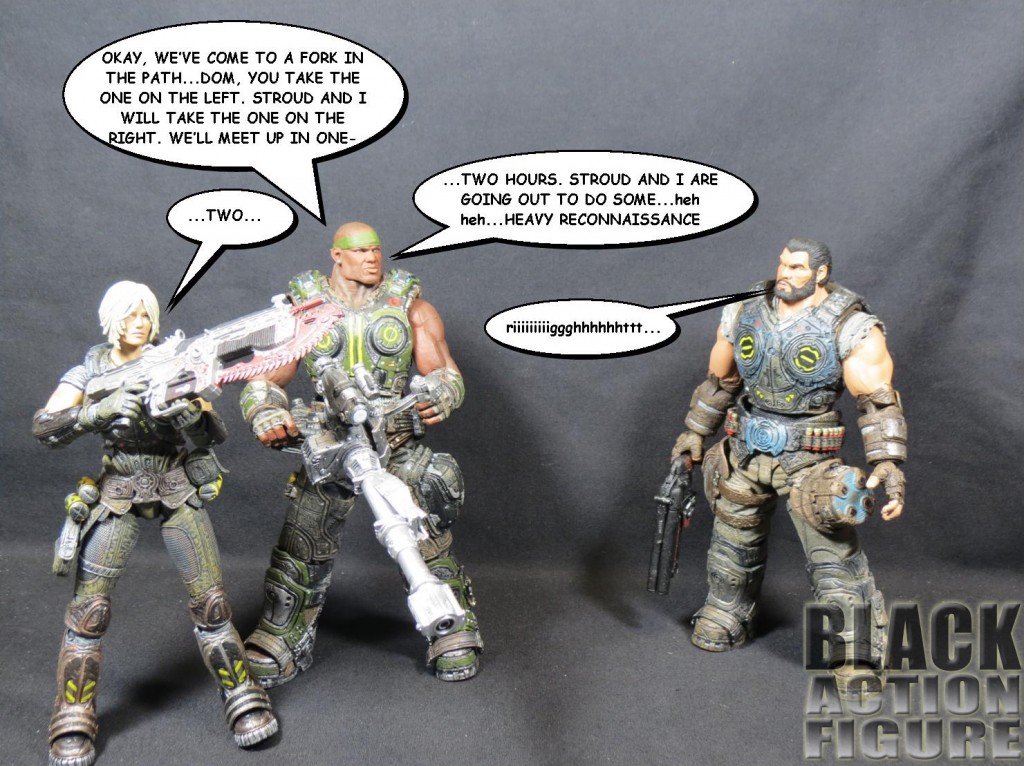 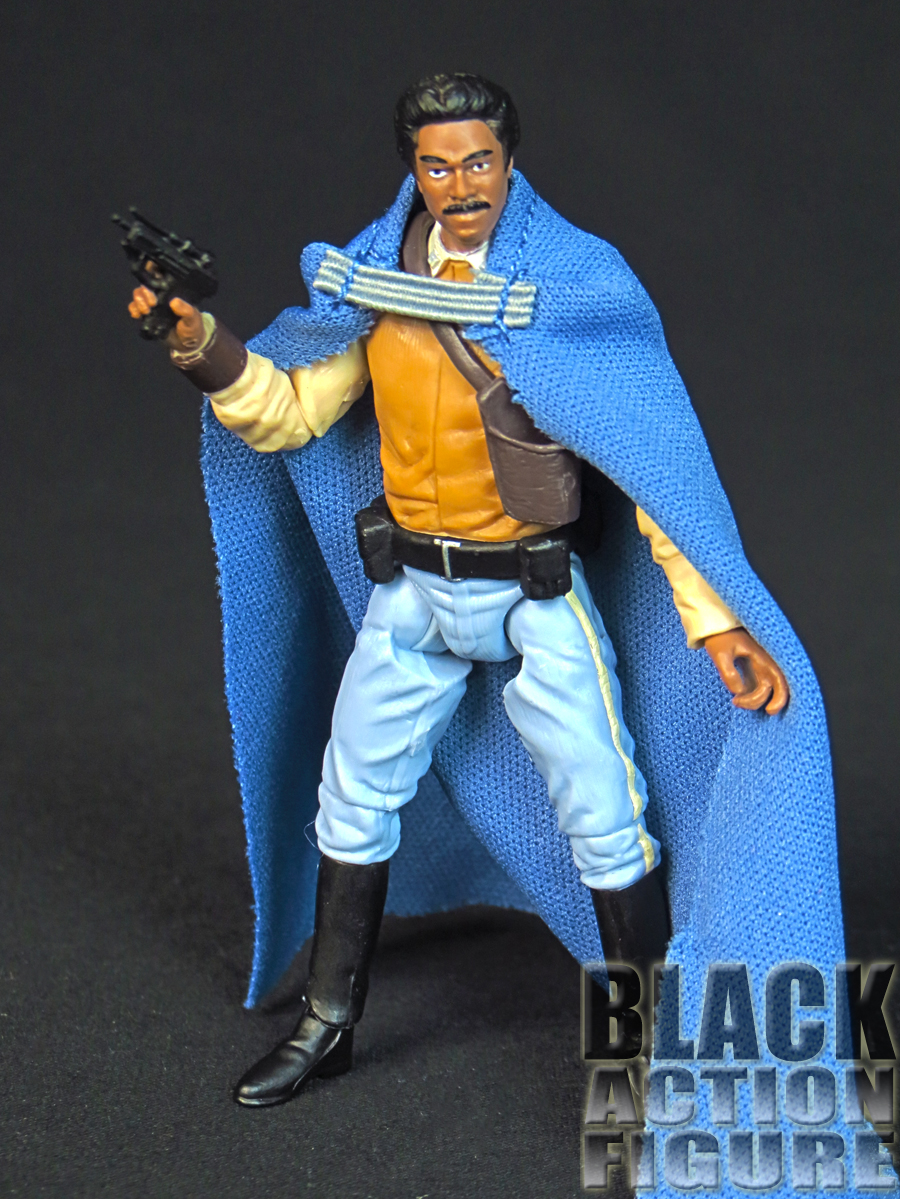