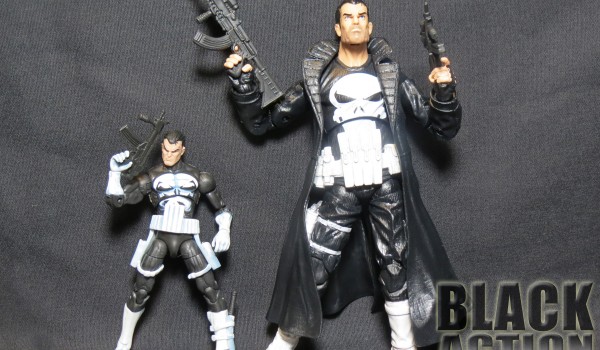 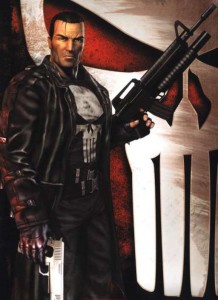 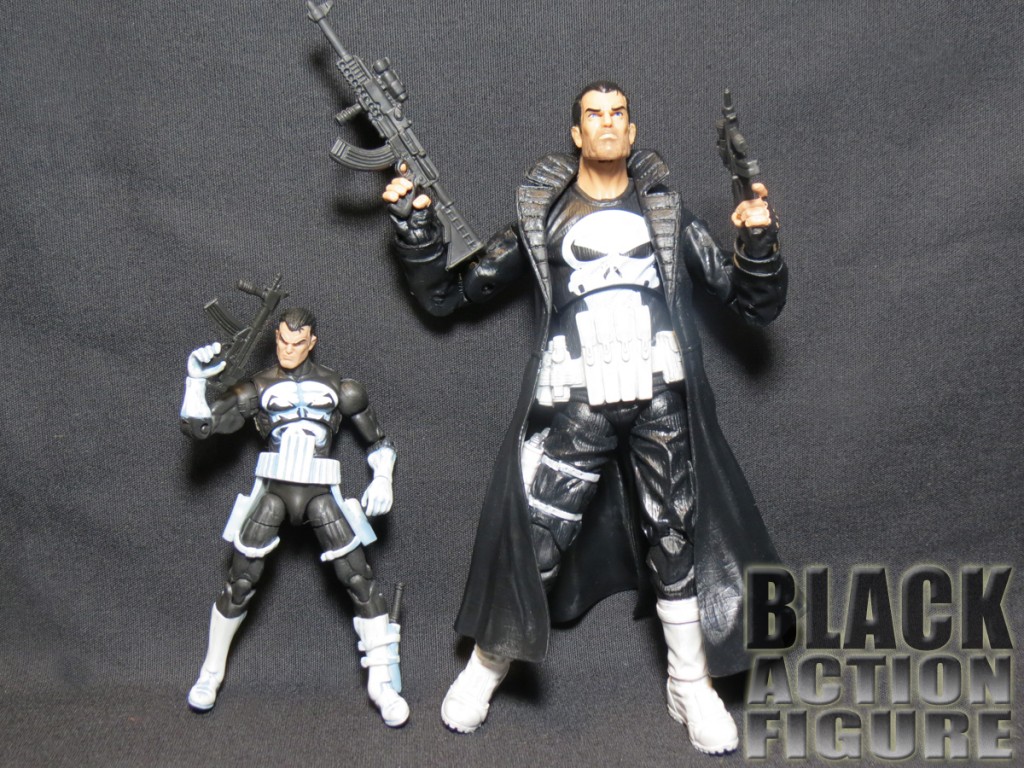 This month has definitely been good for the Punisher.  He not only gets a revamped 3.75″ Marvel Universe figure (The Punisher figure was in the very first Marvel Universe Wave back in March 2009), we also get another revamped Marvel Legends figure (the last one was also released back in 2009).  So the question on the table stands: Did we need the Punisher redone in both scales?  After seeing these figures the answer is “Yes and Hell Yes”.

Since these revamped Punisher figures were released literally 1-2 weeks apart, I decided to take a combined look at them both and see how they compare with their previous iterations.  Check out the full double-review after the break… 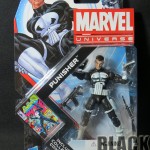 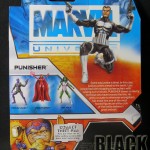 On the back we once again see the figure in a pose along with a short bio, preview of some of the other figures in this wave, and a picture of M.O.D.O.K. begging for us to “Collect Them All” (in this case, to apparently dress them up like AIM soldiers…).  Looking at the prototype figure on the back, I’m happy to see that the final figure is not the far off…although understandably, the prototype on the back does have better paint application.
Score: 9.0/10 (Standard solid Marvel Universe packaging) 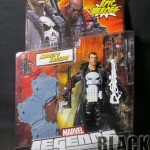 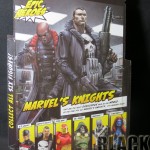 Marvel Legends Punisher
I have to admit, when the “Return of Marvel Legends” hit at the beginning of the year, I wasn’t crazy about the packaging.  But now, it has definitely grown on me.  Again, beautiful artwork mixed with “peg appeal”…this packaging makes kids to adults want to take this down and look at it.  I’ve seen it in stores and I’m amazed at seeing people you know aren’t into action figures take this one down just to look at it.

The back features artwork featured in my previous preview post.  We also have a look at other figures in this wave including U.S.Agent, Iron Man, Dr. Doom, Deadpool, and Mystique.  We also see Blade in the artwork because Blade will be a running change sometime down the line.  Although it’s annoying to collect, these running changes keep the wave fresh while Hasbro has time to put together the next wave of figures.
Score: 9.0/10 (Hasbro makes this part easy)

Just a quick note about both packages, I love how easy it is nowadays to just look at a peg holding several action figures and being able to tell which one is which by just looking at the artwork.  One thing I dislike about Mattel’s DC Classics packaging is how hard it is to tell which figures are on the peg because each package looks exactly alike.  Big ups to Hasbro for appealing, easy to spot and easy to take off the peg packaging. 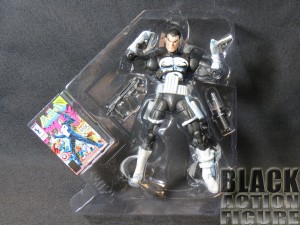 Marvel Universe Punisher
When it comes to accessories, the Punisher has to be one of the easiest characters to accessorize.  No need for an energy blast or lightning bolts or strands of plastic webbing.  All we need are a whole bunch of guns and a knife or two for good measure.  So with this figure, that’s exactly what we get.

The accessories include two semi-auto pistols which fit nicely into side holsters, a dagger which fits into a leg holster, and a sub-machine gun.  Unfortunately, that does not seem like enough weapons for our avenging anti-hero, so with an online store and $2.99, I was able to get him some more accessories for his “war on crime”.  We also get that silly little piece of cardboard with some artwork on it, this time with a comic cover reproduction.
Score:  6.5/10 (Some good accessories are included, but not enough weapons) 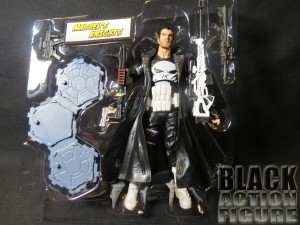 Marvel Legends Punisher
Now we’re talking!  The Punisher should come with so many guns that he needs a sidekick just to carry some of his weapons for him.   This Punisher comes with a semi-auto pistol, a sub-machine gun, a fully-auto machine gun, a pump action shotgun, and a sniper rifle!

This Punisher also features a long, black, trench coat…which we’ve seen before and we’re going to see again when Blade comes out.  The molded plastic trench coat is a great addition, but somewhat hampers articulation (which we’ll talk about) and hides the rest of the figure.  It’s kind of hard to take off, so use caution.

The last accessory is one I’m torn about.  Instead of including a “Build-A-Figure” with this series, Hasbro has replaced it with the same pseudo-lame stands they included with their Marvel Legends movie series figures.  With all the complaining I’ve done about Hasbro taking away the stands from Marvel Universe, I’m kind of mad that they substituted the B.A.F. for a stand.  The whole thing kind of blows my mind.
Score:  9.0/10 (Great accessories, pseudo-lame stand instead of BAF) 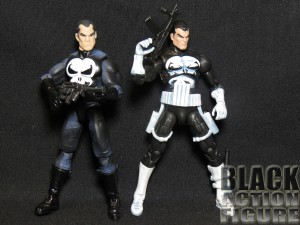 Marvel Universe Punisher
Let me just say, they got this right when they redid this figure.  When putting the M.U. Wave 3 Punisher next to the M.U. Wave 19 Punisher, it is like night and day.  The Wave 3 Punisher suffers from what I call the “Lionel Richie Hello” effect…all you younger kids, watch the video on Youtube and you’ll know what I’m talking about.  Basically, he looks like a super-deformed version of how he should look…like if a blind person with little-to-no sculpting skills sculpted what he should look like.  No doubt Hasbro has used the new 3D computer modeling process to come out with a more comic-accurate likeness of the figure.  It wasn’t bad for 2009, but compared to today’s standards, there is no comparison.

The costume on the newer figure is also more comic accurate.  The new figure comes with usable gun and knife holsters to store some of his weapons.  His belt is also forms into the skull on his chest, which is more sinister looking.  This new Punisher figure also has a paint wash which makes it look like he is covered in shadows.  A slight deduction on the paint application which looks a little sloppy at parts, but all in all, an accurate representation of our comic book anti-hero.
Score: 9.5/10 (An improvement in every possible way, but sloppy paint app) 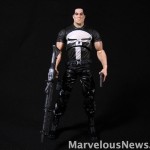 Marvel Legends Punisher
As bad as the original Marvel Universe Punisher was, it does not compare to Hasbro’s first attempt at the Punisher (picture courtesy of MarvelousNews.com).  It seriously looks like a random thug thought he could pass himself off as the Punisher…but his costume looks like some cheap, asian, bootlegged, knockoff.  How did Hasbro even green-light this one? 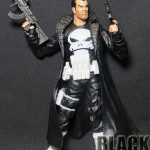 The new Marvel Legends Punisher is what we expected and I’m glad that the whole Hasbro “Return of Marvel Legends” movement is re-doing characters that they have half-assed did before (including this Punisher and a more accurate X-Force Deadpool).  The new Punisher honestly looks like a 6″ version of the Marvel Universe, with more detail and a grittier look especially with his 5 O’Clock shadow.  Again we have the  more comic accurate white boots and belt.  The skull on his chest while different from his Marvel Universe counterpart, is definitely a fair re-creation of representational artwork.  The trench coat is even somewhat accurate as the Punisher is often seen wearing one to hide the gazillion weapons he has underneath.

Sculpting is on point, likeness is on point, even his height when compared to older Toy Biz Marvel Legends is on point.  The addition of the trenchcoat just adds to this character, although I wish Hasbro re-decoed the coat somewhat.  They did do a good job of detailing the coat to look somewhat like leather instead of the rigid plastic it is made of.  This is all around the essential Punisher action figure that you will want in your Marvel Legends collection.
Score: 9.5/10 (a little deduction for re-using the trench coat) 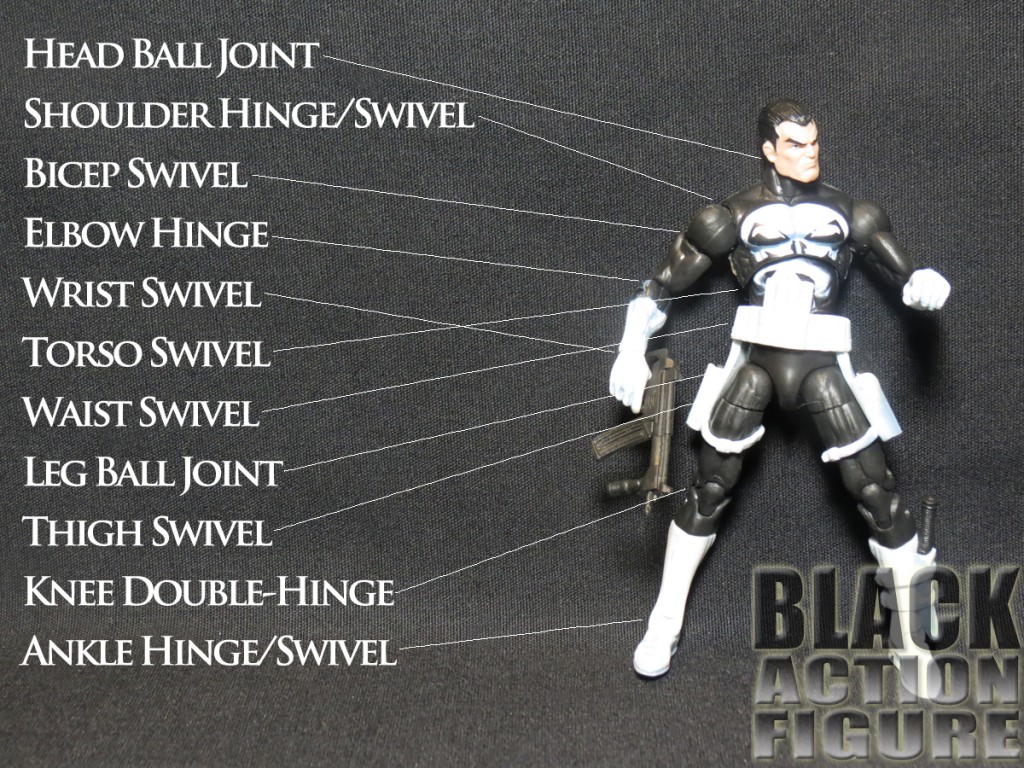 This Punisher action figure has over 25 points of articulation, making it one of the better articulated Marvel Universe characters.  In comparison, the original Marvel Universe Punisher had about 22 points but still felt a little too cumbersome.  Although the new figure does have awesome articulation (including the torso swivel) some of the articulation, particularly around the waist and legs are hampered by his belt.  This may make some poses like the “bended knee” pose close to impossible to do.  This one is still the superior figure especially in terms of articulation.
Score:  8.5/10 (Small deductions for each point of articulation the belt interferes with) 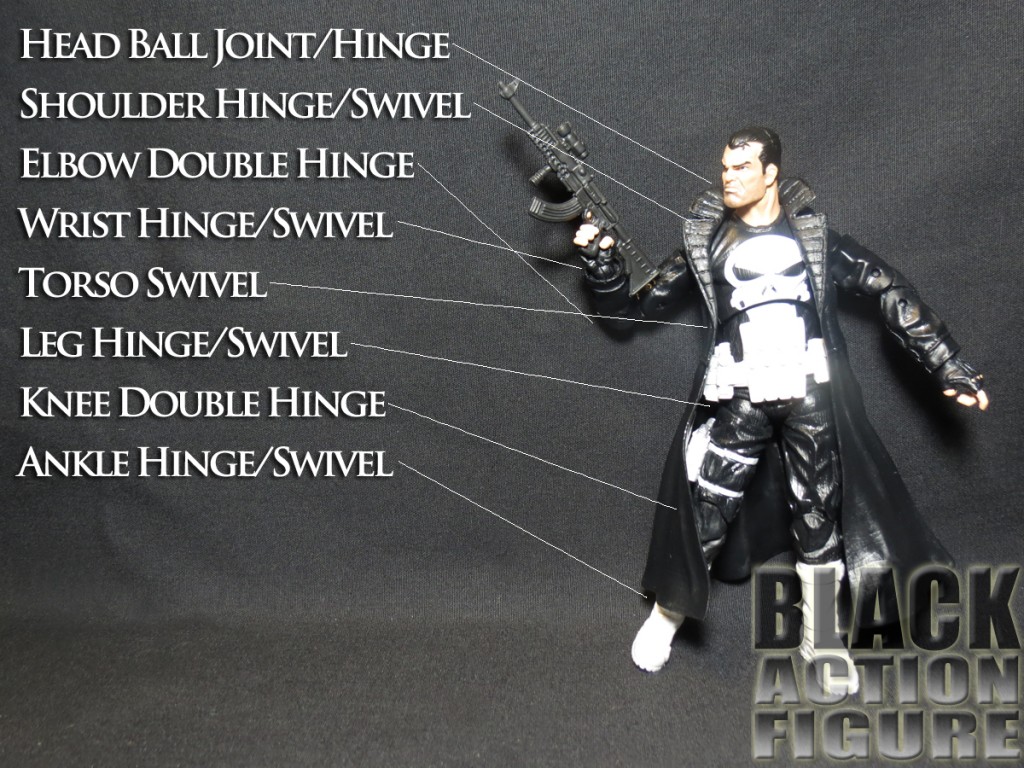 Although comparing the two lists above, it doesn’t seem like it, but the Marvel Legends Punisher has over 27 points of articulation, a hair above its Marvel Universe counterpart.  Noticeably missing though is waist articulation.  One thing to note, just like the Nick Fury figure I reviewed, the trench coat makes the Punisher’s arms a little hard to properly move although I did notice that Hasbro made his arm a little longer to probably make it somewhat easier to manipulate.  A definite plus in this figure’s articulation is the hinged head which allows his head to swing all the way back, making those poses with his sniper rifle easier to pull off.  Again, the articulation makes this Punisher figure a definite to add to your 6″ collection.
Score: 8.0/10 (Great number of articulation, deduct points for no waist and limited arm articulation)

I can’t say enough how happy I am to add both of these figures into my collection.  My Wave 3 Marvel Universe Punisher was displayed in the back because I didn’t want too much attention drawn to it.  My 6″ collection will also welcome the Punisher standing by their side.  This is a great time to be a collector and I hope Hasbro continues to put the same time and attention to all of their future figures that they are doing today. 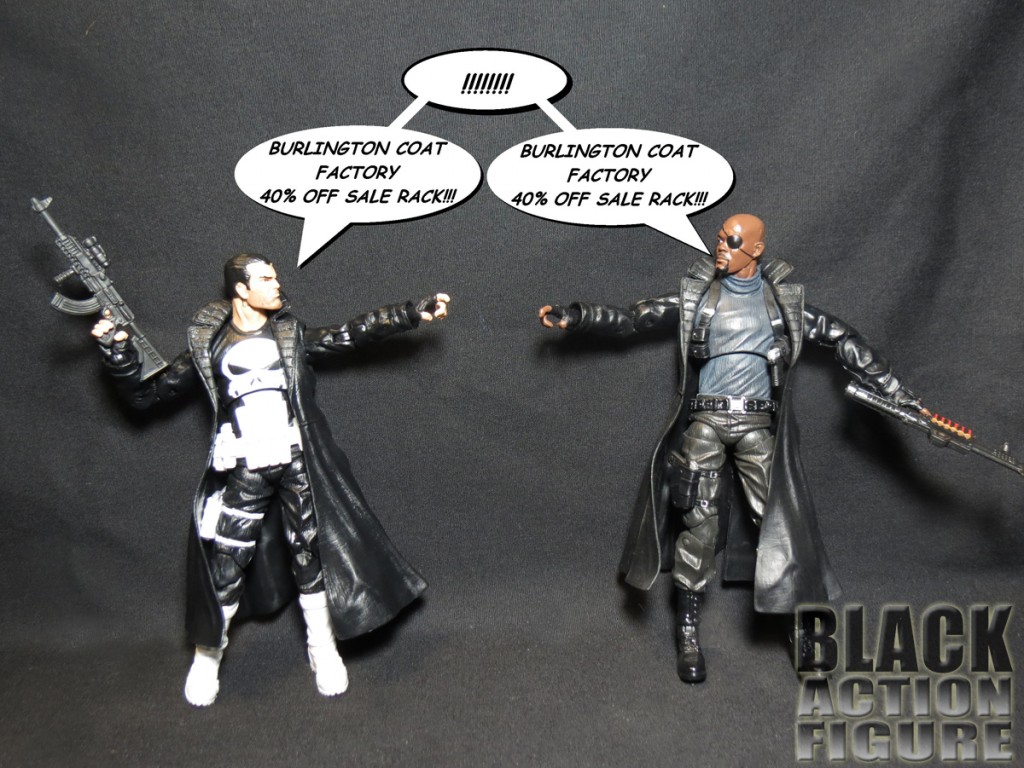 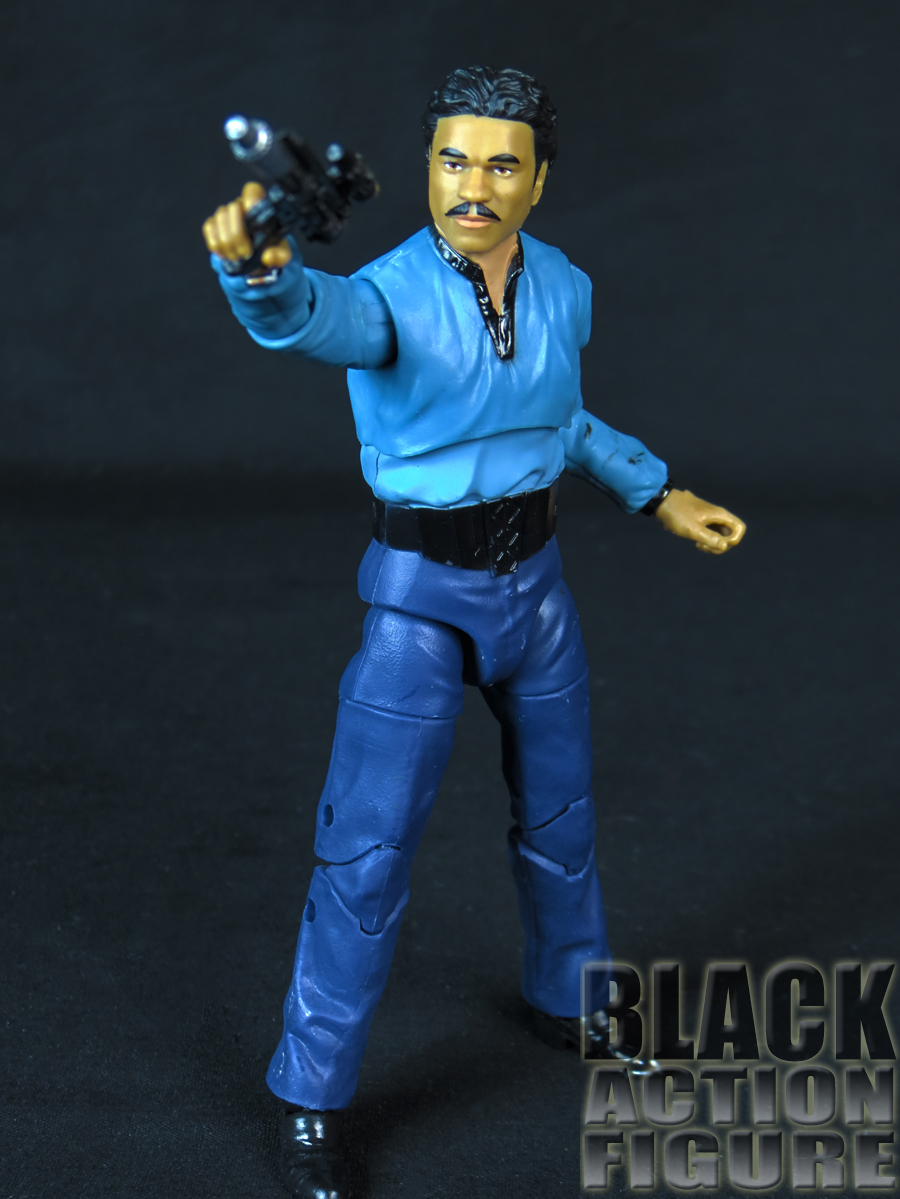