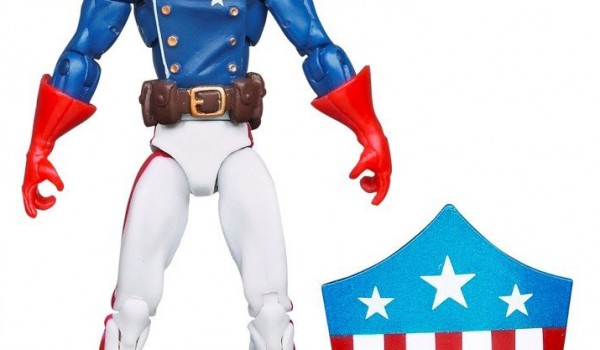 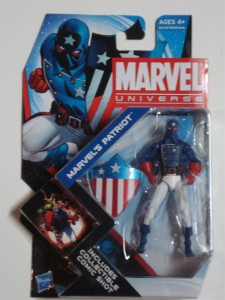 Marvel’s Patriot gets to be the first Black action figure that I review.  But here’s the kicker…if you don’t read comic books (namely Young Avengers), you would have no idea that (surprise, surprise) this dude is Black!  He is covered from head to toe in his uniform.  This is Patriot’s first costume.  His current costume in comic book continuity has him in just a mask over his eyes. 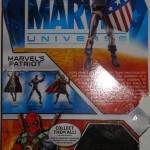 This wave of Marvel Universe figures is a modified redesign of what we normally see.  Gone is the S.H.I.E.L.D. logo…it is now replaced with an “action shot” picture featuring the character.

On the back is a summary of the Patriot character.  Long story short, his grandfather was known as the Black Captain America, Patriot always wanted to be a superhero, bing-bam-boom, he gets the same powers as Captain America through common comic book lore.

Also new to this packaging is Deadpool saying some smartass thing.  He is preceded by Nick Fury, then Norman Osborne, then Commander Steve Rogers.  (On a side note, I may have to do a review of Deadpool.  Even through his overexposure, I still tend to like him a lot) 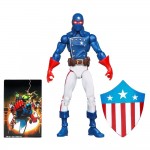 Accessories
Okay, this is where this review gets messed up.  Patriot comes with the original Captain America Shield and…the lame ass picture on the front of the package.  Really?  That’s it Hasbro?  What happened to the much needed stand you included with your figures?  I loved those things!  So as an alternative, I use a black stand that I picked up from SmallJoes.com, a pretty decent site for these types of accessories.

But let me take a moment to vent.  Hasbro includes like 10 weapons and a stand in their GI Joe line.  Even in some of their Star Wars line, they include a stand and a bag of weapons…so where did they go wrong with this?  What prevented them from adding another piece of plastic into the packaging?  I can forgive them for some things, but this is cutting corners especially when so many retail stores are raising the price of Marvel Universe figures. 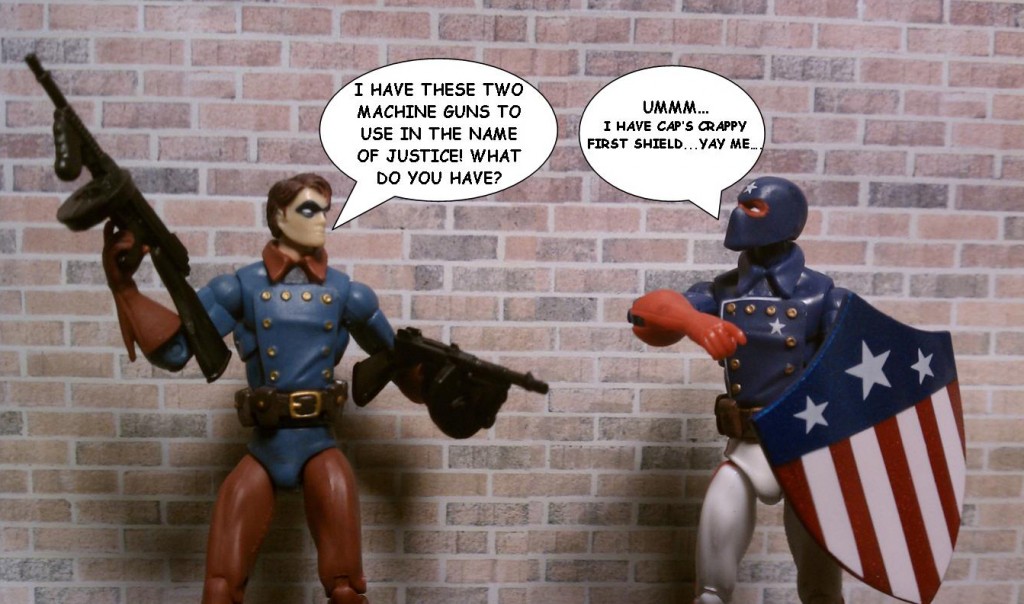 The Good
Patriot is the first in what I hope to be more-to-come Young Avengers.  I would love to see more characters from other younger Marvel groups of superhero adventurers including the Young Avengers, Avengers Academy, and the New X-Men.  We have such a diverse amount of Avengers already with the Mighty Avengers, the New Avengers, and the Secret Avengers, that it was time to give the young’uns a chance.

Patriot is a straight up repaint of the Marvel Universe Bucky body with a new head.  The shield is also a reused accessory from classic Captain America.  Patriot has good articulation and is able to be posed in various stances….although again, if I didn’t have my own stand, some of those poses would have been hard for him to keep.

The Bad
Unlike the Bucky figure, Patriot’s joints are really loose, especially at the gloved areas.  The clip on the back of the shield is also obviously made for a thicker arm type, making it pretty loose when clipped onto his arm.  I had a hard time of making the shield stay in one place.

Another disadvantage of being a straight repaint is that you can tell that Patriot’s hands were meant to hold weapons of some type…in this case, they were meant for the machine guns that Bucky carries.  It would have been nice is they could have included at least one closed fist so it wouldn’t be so obvious that he is not holding something.

And again I have to mention that it is too bad that he does not  have his newer costume showing off his proud heritage.  Hopefully a reworked figure featuring his newer costume will come in a future multi-pack. 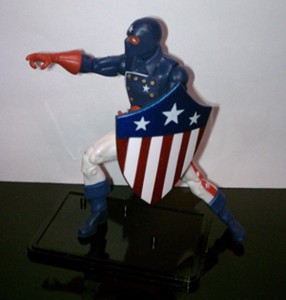 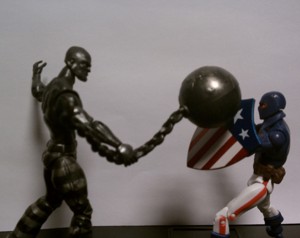 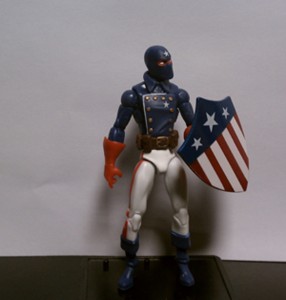 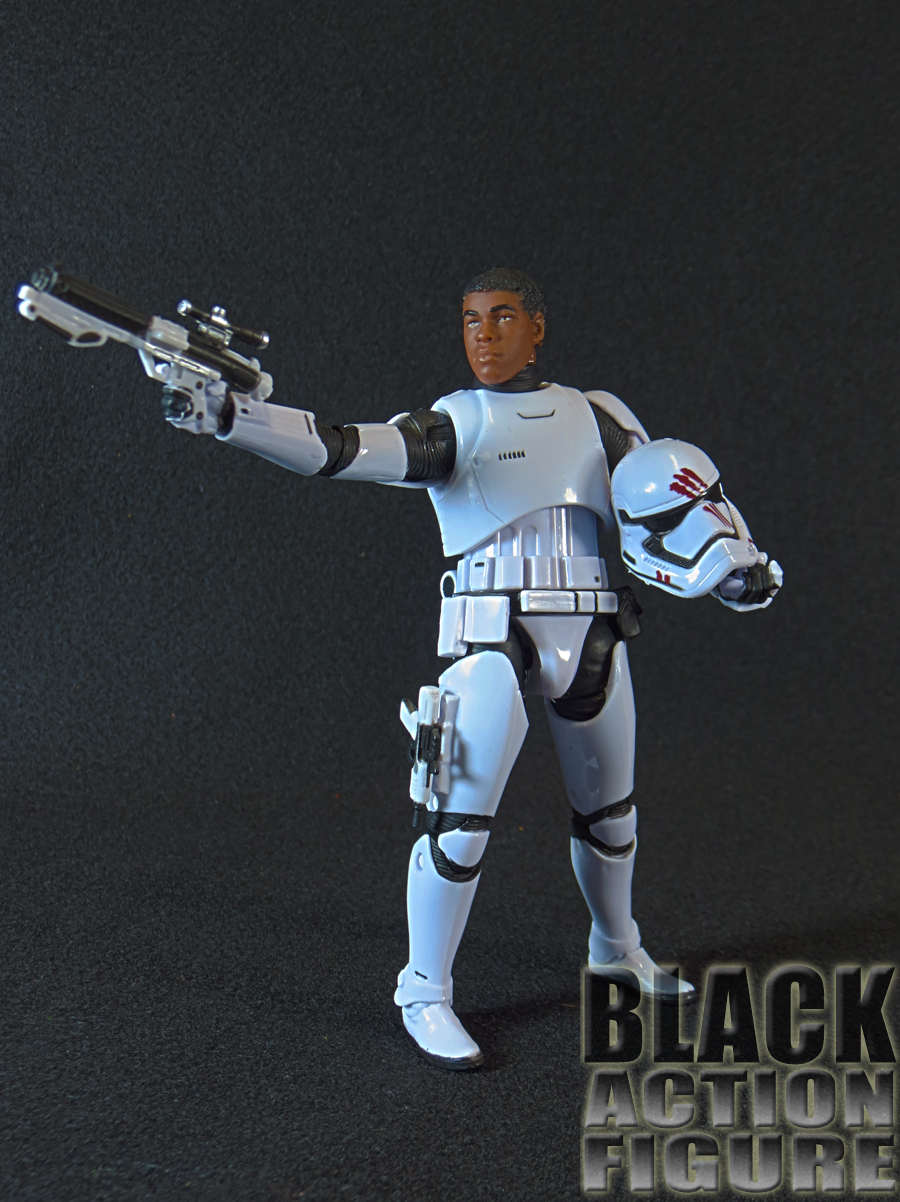